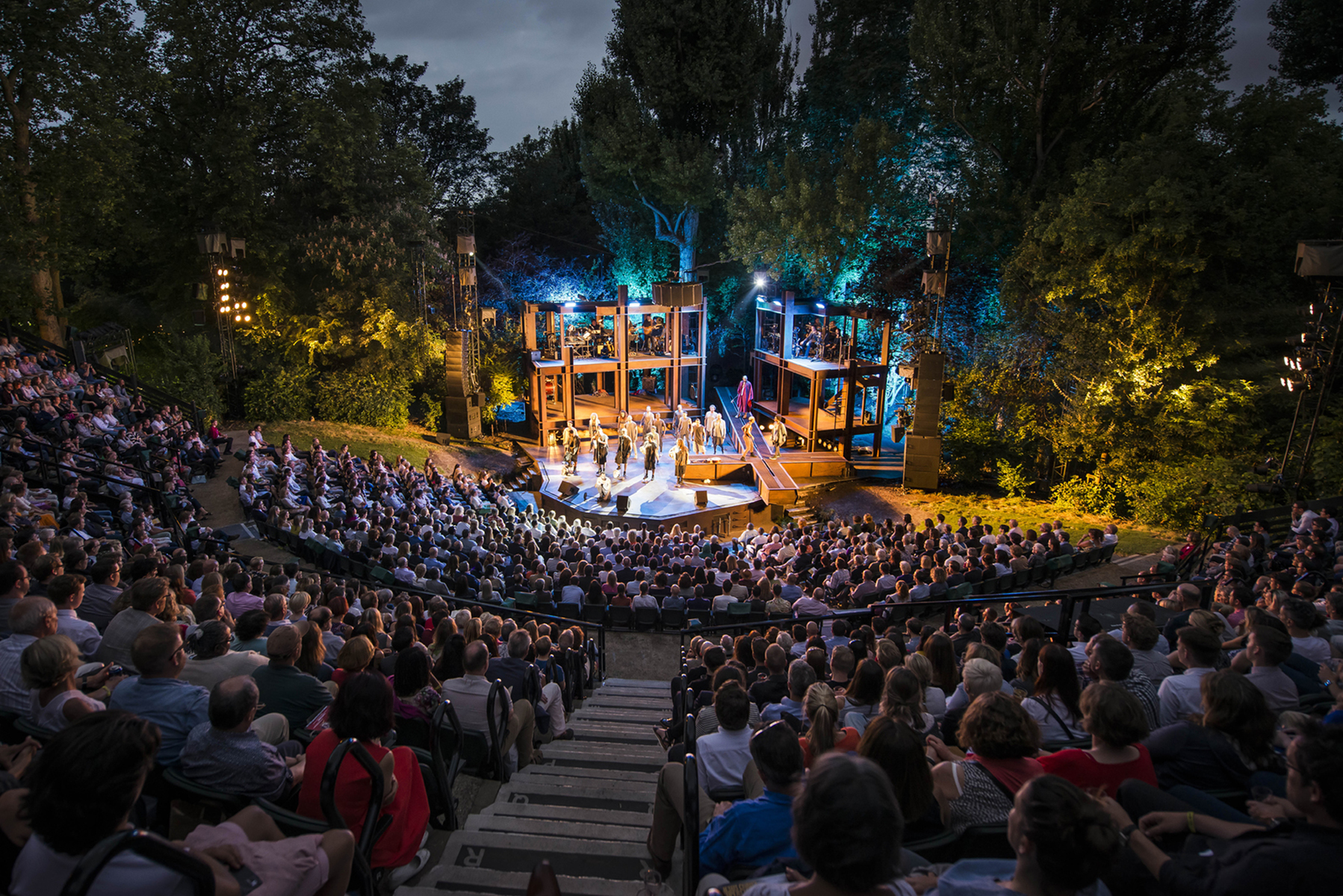 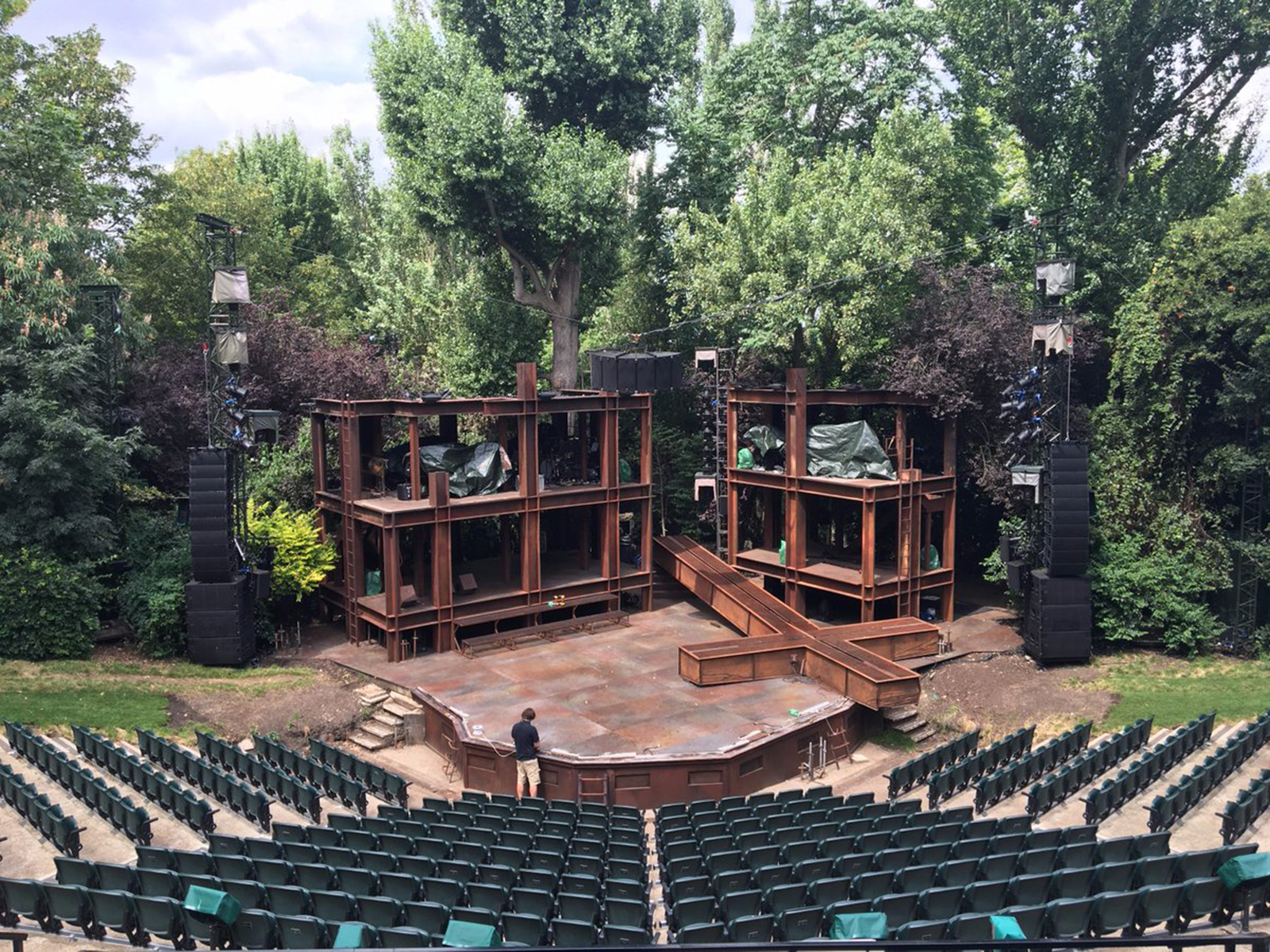 With one of the largest single-level auditoria in London, and the oldest permanent outdoor theatre in the UK, Regent’s Park Open Air Theatre (OAT) has played host to Martin Audio’s W8LM Mini Line Array over the last five years.

Autograph Sound designer Nick Lidster has specified it there as the OAT amplify all their shows, and the summer season finale is always a full scale musical. When it came to the recent six-week run of the new production of Jesus Christ Superstar, under the direction of Timothy Sheader, he knew that with sell-out audiences of 1250 expected every night in the fan-shaped auditorium, he needed something that would emulate the classic rock sound that had characterised the original album, featuring Deep Purple’s Ian Gillan in the lead role, 46 years ago.

“I was concerned that while the traditional musicals we do at Regent’s Park sound great using W8LM, with Jesus Christ Superstar I felt we would need to run the show at a much higher volume, and therefore we might have noise issues from local residents and park users.

For this version of JCS, Tim Sheader wanted to go back and explore the sentiment and fresh feel of the original progressive rock concept album. I grew up with early ‘70s prog rock of Genesis and Yes, and my love of prog and understanding of why those amazing bands sounded so good live seemed the most authentic approach to adopt, to rediscover this very original and classic show,” stated Lidster. “I felt that the MLA array was the right sounding loudspeaker system for the job and it offered me the most control and consistency of sound for the auditorium.”

This was a big progression in terms of sound design at Regent’s Park. It was a triumph all round.

He had received favourable reports about Martin Audio’s award-winning platform, and many of the Autograph sound team had been impressed after attending a system demo. With the contouring of the theatre seating bowl area, set in deep parkland, he was eager to use the DISPLAY onboard control software. “I felt that if we were going to deliver a big sounding show we would need to control the spill. We did not want ‘killer’ volume levels, but I did want dynamic, clear, hi-fi sound, delivered with high intensity in every seat.”

He specified the MLA Compact, knowing its high degree of controllability would be ideal for this unique theatre, where the distance between stage and auditorium perimeter was no more than 35 metres. He rigged ten MLA Compact per side and six MLX subs in a reverse cardioid design, two stacks of three per side. “This meant we could get lots of energy firing into the audience, especially at the low end, to give us that typical early 70s rock gig sound.”

To improve things further, he said, the 11-piece band comprised many top-level session musicians — such as bass player Oroh Angiama and Pete Lewinson on drums — helping to keep the sound both fresh and exciting.

Martin Audio’s Jason Baird and Nigel Meddemmen provided technical support. “Having discussed the overall EQ I wanted, we went for the rock preset, but softened to give a more suitable, clearer sound,” Nick Lidster continued. “We used the Hard Avoid setting to be just above the mix position, dropping off sharply just above the operators’ head. There was no bleed above the top of the seating bowl, and thanks to the cardioid subs there was no need to prevent bleed at the back of the stage either, as the level was extremely low.

“We programmed just a 3dB variation from front to back of the auditorium so that I had a massive and consistent sound everywhere; the show ran at around 95dB average.”

His overall verdict? “This was a big progression in terms of sound design at Regent’s Park — it was another level up. You could hear that the sound was consistent everywhere. You felt confident that any level or EQ changes, made by my engineer, would be heard everywhere and that unwanted spill was kept to a minimum. It was a triumph all round.

Among those giving an unqualified thumbs-up to the quality of the sound was the original lyricist, Tim Rice — along with the team at Regent’s Park.

Stated William Village, Executive Director of Regent’s Park Open Air Theatre, “In creating the gig-like vibe for Jesus Christ Superstar, it was important to us to use a sound system which would support that production vision. Martin Audio took up this challenge and delivered a sound system of excellence, showcasing our performers, rock musicians, and the iconic lyrics and music of Tim Rice and Andrew Lloyd Webber.”