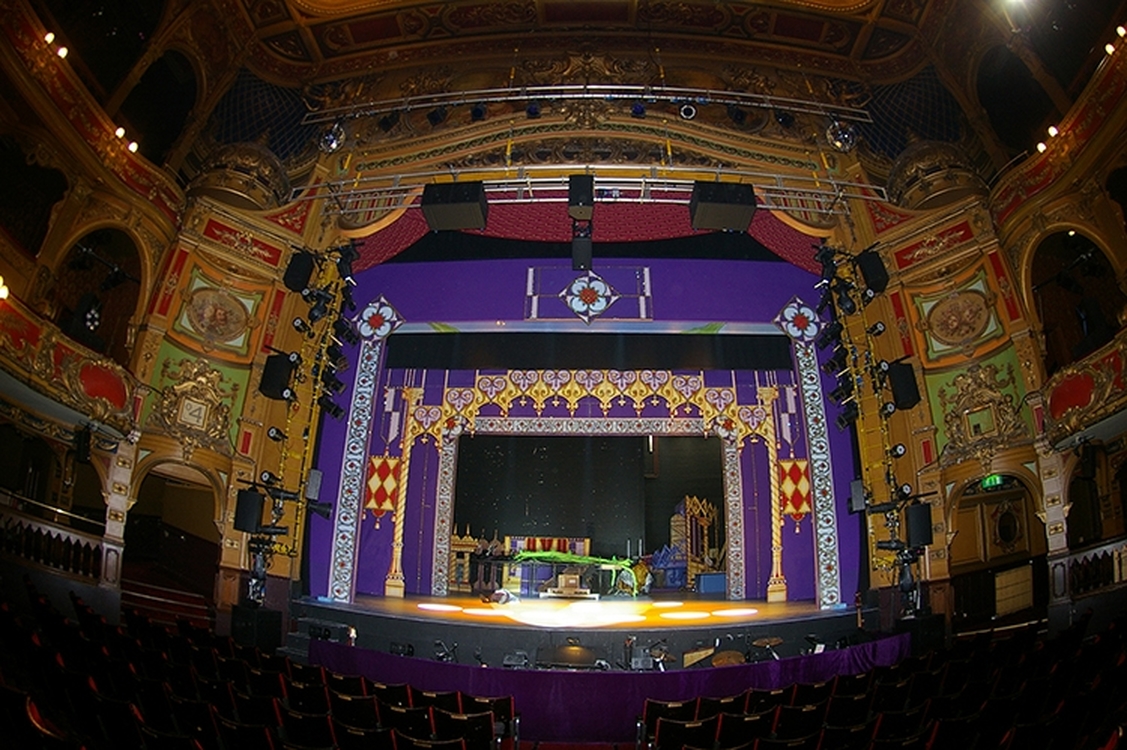 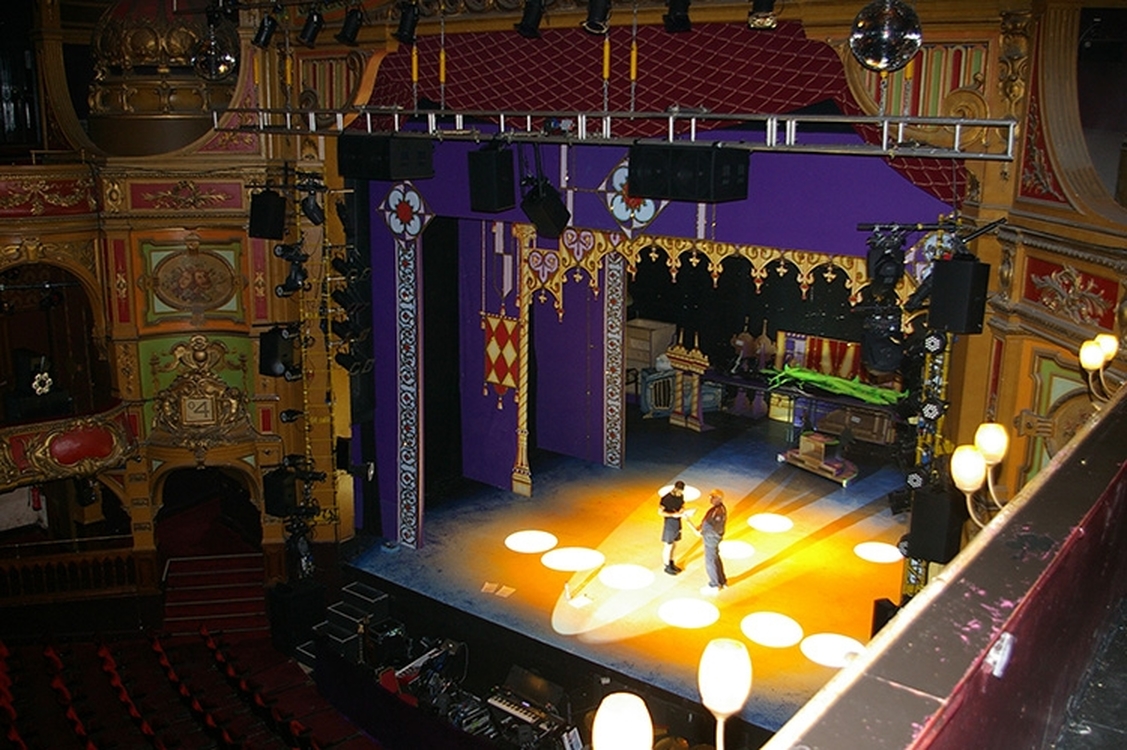 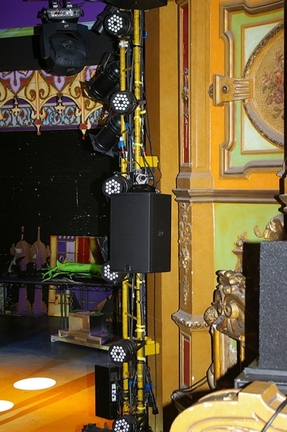 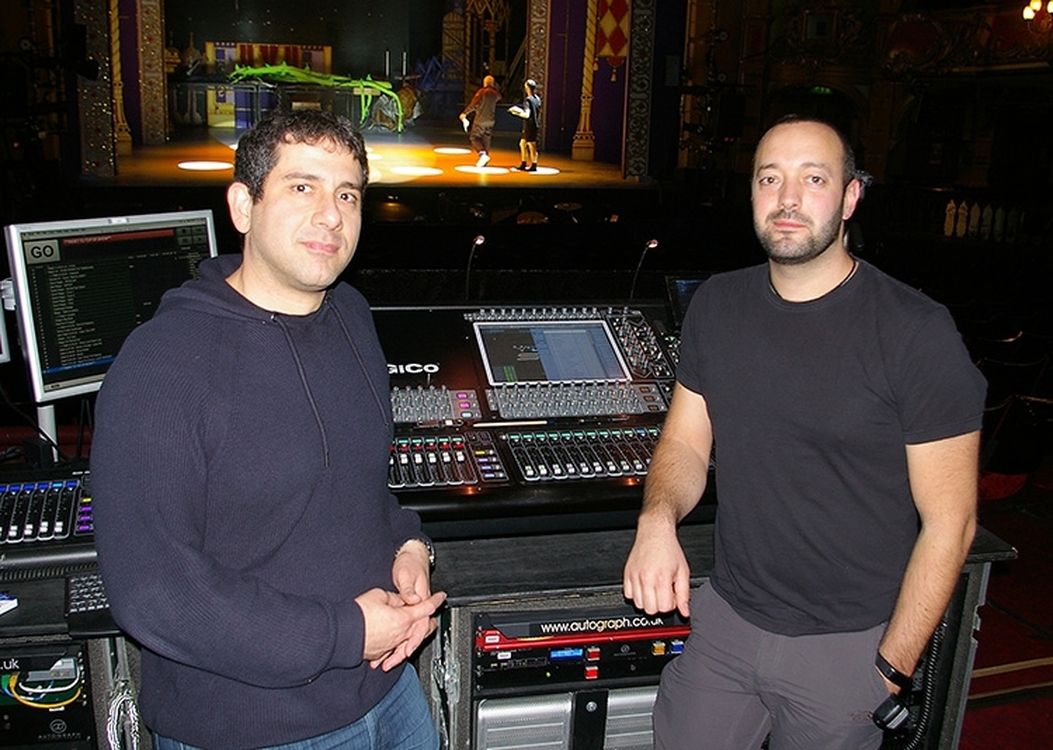 Following the successful deployment of Martin Audio's MLA system at Regents Park Open Theatre this summer, Autograph Sound has been using the manufacturer's CDD-LIVE 15 15' powered, point source solution in some of its recent theatre productions.

In this challenging environment, a three-way L/C/R CDD-LIVE 15 system, with three enclosures each side of a clustered centre fill/downfill, was mounted overhead on the motorized horizontal truss.

'We were curious to hear it after having had such a good experience with MLA,' said Lidster. 'Although our existing 15' point source solution is still reliable it is 30-year-old technology so we had been looking for a replacement to handle this kind of show.'

The Autograph team listened to the CDD-LIVE 8', 12' and 15'. 'While the first two were both nice and clean, producing good horizontal coverage with a flat response, it was the 15' that really stood out,' noted Psillas.

'It didn't colour the sound, it had a flat response, and it delivered the fullness of sound that you would normally expect from a large PA. We spun it round so it was facing outside and walked away from it 30 metres to check HF coverage at a distance, and all these findings convinced me I would like to test drive it on this panto.'

Awash with gilt and velvet, the historic Hackney Empire is one of the new surviving Frank Matcham fin de siècle theatres, and Avgoustos Psillas' first challenge was to counteract an acoustically 'bright' room - featuring a lot of hard surfaces - and a loud show exacerbated by a full house of screaming children. 'Because the band is basically positioned in the stalls, and the audience takes an active part in the show, the system has to be loud.  But due to highly reflective surfaces in this venue, the coverage and focusing also have to be very precise in order to minimise unwanted reflections.'

The show, mixed by Gareth Tucker on a DiGiCo SD10T, driven at 96kHz, also involves multi-layered sound FX triggered from QLab, with a keyboard heavy band and drums. 'We throw a lot of material at CDD - and what makes me know a system is good is when I play the sound FX ahead and I can run it almost completely flat,' the sound designer continued. 'I usually use filters for system cross-over and I rely on my subs to carry the depth of the mix. That gives me better control over how the venue responds to low frequencies. In areas where subs don't reach, I can rely on the low end from the 15in CDD-LIVE.'

Four CSX-LIVE 218 (2 x 18) subwoofers were deployed - two in the stalls and two on the truss. 'These sounded great,' he says. 'Again, we used little processing and besides, I have used WSX many times before in this venue so I was sure the new double 18' subs would be just fine.'

Working in a Grade II-listed building brings its own challenges, since there are no rigging points. A pair of CDD-LIVE 8 on each of the two balcony levels (Circle and Upper Circle), suspended or stand-mounted, provided the surround.

The six proscenium CDD-LIVE 15 took the bulk of the show as they carried all elements of the mix. 'As the prosc system works so well I used the CDD-LIVE 12 as a down-fill and the CCD-LIVE 15 as a centre-fill for the circle and upper circle,' he explains.

Avgoustos also emphasized the appeal of the CDD-LIVE 15 out wide. 'Because of the way I focus the system in a venue like this, where clarity is everything, sidefills are vital. The CDD's 100° horizontal dispersion is perfect as when I used a box with 110° it caused so many issues with reflections and too much cross coverage.'

The result, declares the Autograph designer, has been a great sounding show. 'I really liked CDD-LIVE to begin with but the beauty of trying a new product in a challenging show such as a panto over a few weeks, is that you get to know a lot more about it and how it performs.'

His sentiments were echoed by Nick Lidster, who explained that Last Five Years' artistic director had been impressed with the Jesus Christ Superstar production at Regents Park, and suggested a return to Martin Audio. But this was a far cry from the outdoor performance. 'Victorian theatres haven't changed in 150 years and this requires a workhorse 10, 12 and 15in speakers,' he says.

Describing this show as an 'old school musical theatre design without over-amplification' the four CDD-LIVE 15 have been used variously in arrayed left and right pairs on the pros. opening, for long throw and front fill. 'The show requires a nice wide coverage. I wondered whether CDD-LIVE would be able to handle this but it sounded beautiful at the level I was running it at.'

EQ'd and delayed from the DiGiCo desk he described the sound as 'super-clear, analogue and chocolaty.' He added, 'CDD-LIVE is an extremely important loudspeaker and sounded really great, producing excellent, high value hi-fi.'

In summary, he said, 'I was very pleased with the performance of CDD-LIVE - it sounded beautiful. This was really a high-brow theatre musical rather than a rock show and hi-fi was required, and that's the whole reason I wanted to use it in the first place.'