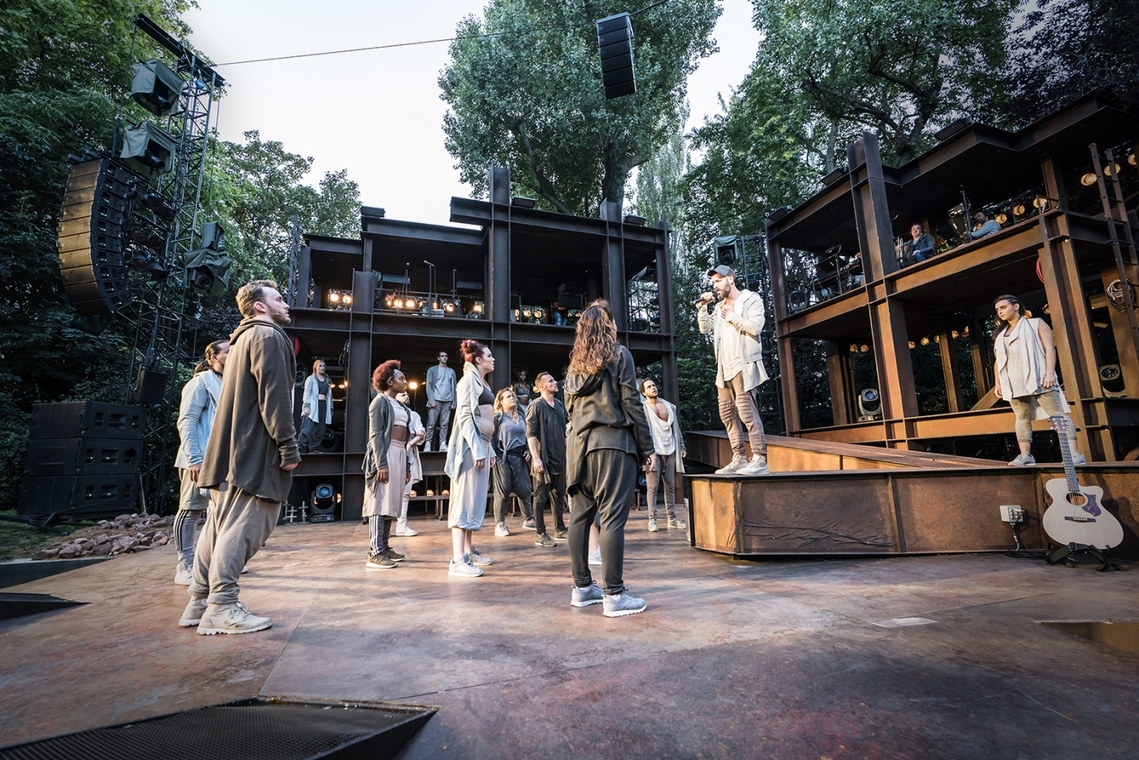 Under the direction of Timothy Sheader, the show would play to capacity audiences of 1250 nightly in the fan-shaped, raked auditorium - and in order to emulate the classic rock sound that had characterised the original album 46 years ago Lidster sensed that the award-winning MLA concept would be best fit for purpose. It was duly nominated for an Olivier Award.

Last year, for the centre image he had used a different sound source. It was while auditioning MLA Mini at a Leo Sayer concert for another production that he instinctively realised that this would offer a better option for JCS when he came to refresh the production at the start of the 2017 season.

'After last season finished I looked at what I needed to do by way of streamlining, and after hearing MLA Mini I knew it would be perfect for the centre cluster,' he confirmed. In addition to being discreet, it was also a third of the weight of the previous hang, which made it a much safer solution.

Supported by Martin Audio's Nigel Meddemmen, six elements of the MLA Mini were centrally deployed and at the same time Nick Lidster chose to fly the main line array higher than previously. 'I wanted to focus the sound down - to ensure we got all the energy into the bowl shaped auditorium, and at the same time minimise the spill over the back and into the Park. That's what I felt was needed, and the lower bowl area sounded so much better as a result.'

He stated that with the centre cluster he had used previously there was too much energy spilling into the park. 'I needed to be able to steer it towards the front of the auditorium … to around half way back where the main PA takes over.' He could also see from the Leo Sayer experience the wisdom of having all components from within one family, particularly with MLA's unique controllability.

'In fact some of the story-telling became clearer,' he said. 'It was dynamic without being loud, and in Gethsemane, for instance, [with the sound imaging] Jesus is brought right into the lap of the audience.'

There were other benefits of MLA Mini, as experienced by this year's sound operator James Hassett, foremost being its ease of tuning. 'MLA Mini provided a major improvement not least because I could use it without needing to EQ it,' Nick Lidster explained. 'The vocal image felt right above you and as a result I could run the front fills so much hotter this year.'

William Village, Executive Director of Regent's Park Open Air Theatre, had stated last year that 'in creating the gig-like vibe for Jesus Christ Superstar, it was important to us to use a sound system which would support that production vision. Martin Audio delivered a sound system of excellence, showcasing our performers and rock musicians.'

And with the addition of MLA Mini in 2017 they really upped the ante.