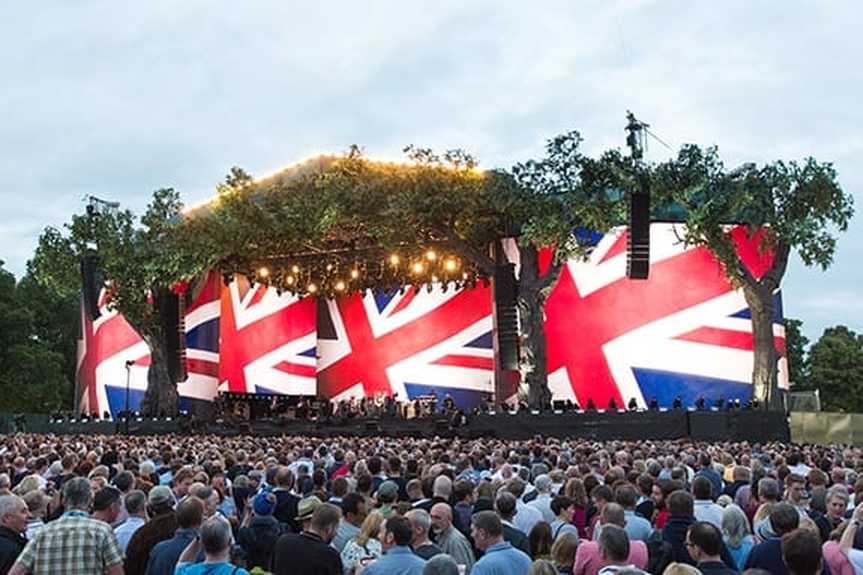 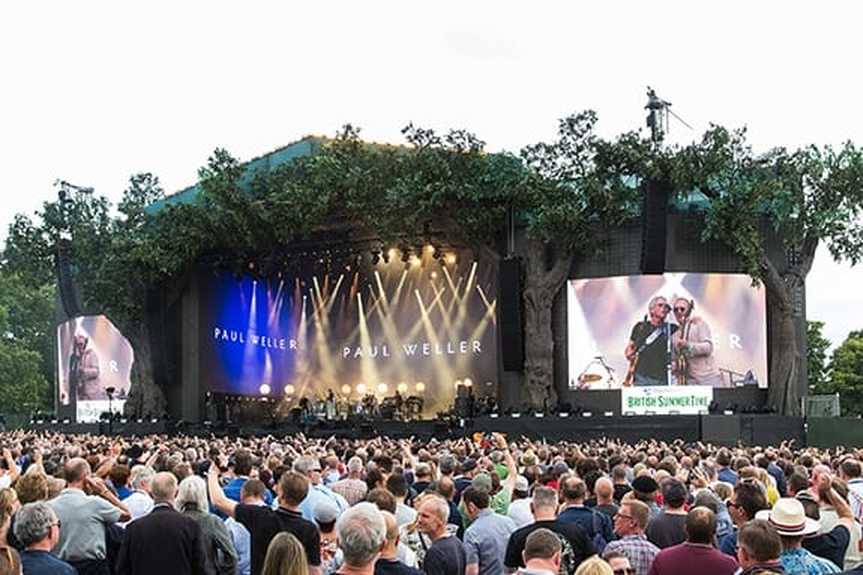 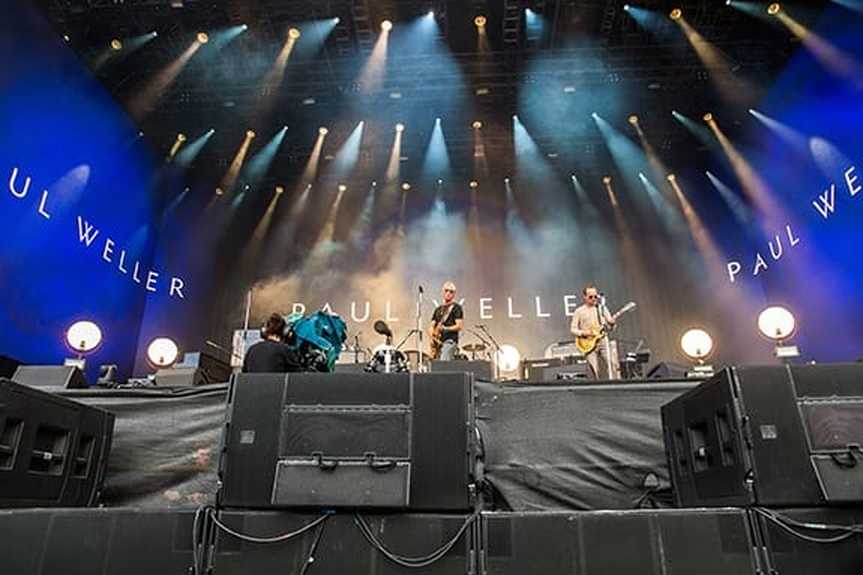 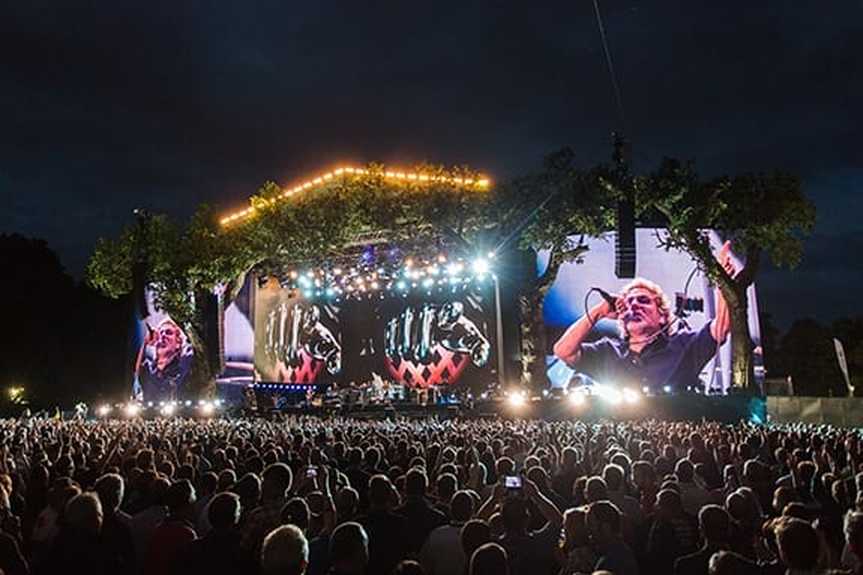 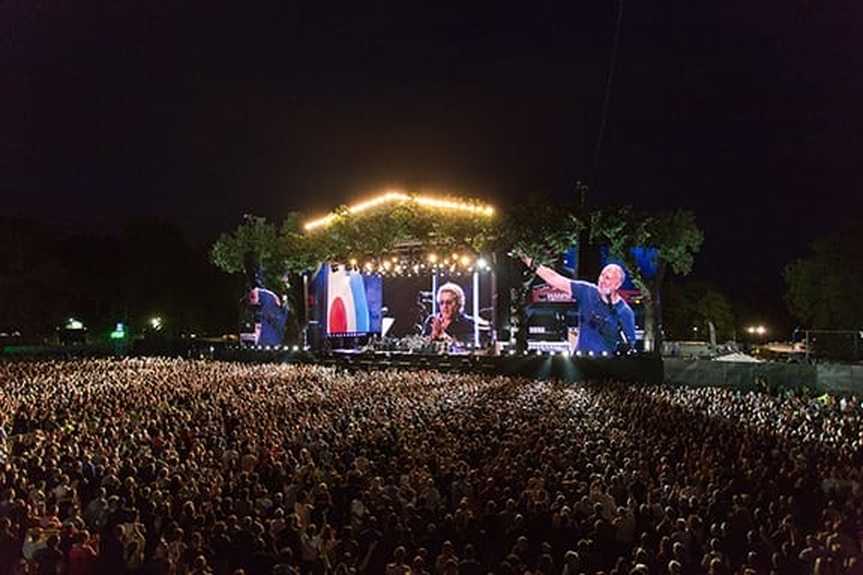 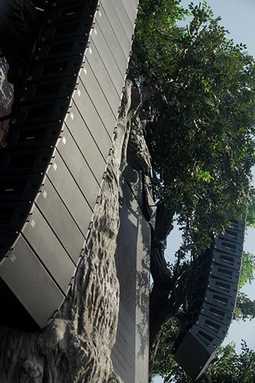 CAPITAL AND MLA MAKE BEST EVER BST AT HYDE PARK

For the third consecutive year, Capital Sound's MLA PA system from Martin Audio was on duty at the 10-day Barclaycard presents British Summer Time Hyde Park festival in Hyde Park - to meet both the on- and offsite requirements of promoters AEG Live and sound consultants Vanguardia.

Previous to 2013, Hyde Park concerts had been dogged by offsite noise pollution leading to neighbourhood complaints and the need to reduce sound levels on site - meaning that the audience couldn't hear the performances. Famously after a Blur headline gig in 2012 there was uproar from the audience and media criticising the poor sound quality. Despite resounding successes since 2013 with the introduction of AEG, Capital Sound and MLA to the site, there remained a lingering perception in mainstream media that Hyde Park was still a sound challenge.

So what better way than to dispel the myth once and for all than for Blur to return this year with a blistering headline set, in addition to other headliners The Strokes, The Who, Kylie Minogue and Taylor Swift, all of whom received stellar reviews from the music and general press, regularly citing 'loud and clear' sound levels for the audience. So what about those offsite noise complaints?

Vanguardia principal consultant, Olly Creedy confirmed that complaints on site had been 'significantly reduced' again, believed to be their lowest ever levels. He reported that, 'The sound has been consistently over 100dB for the headline acts and [for The Who headline show] there was 30dB of attenuation in view of the wind, which we've never seen before at Hyde Park. This would enable sound levels of up to 105dB to be achieved at the desk while still restricting to 75dB offsite limits.'

And promoter Jim King, Senior Vice President, Live Events, at AEG added his own endorsement to Barclaycard presents British Summer Time Hyde Park, stating, 'We are pleased that even in challenging wind conditions we were still able to operate at levels unimaginable three years ago. To achieve this and reduce local resident complaints for the third year running is a huge success for the event. The work undertaken by Capital and Martin Audio has again strengthened Hyde Park's position as the best outdoor venue in the world.'

And so with the site layout now firmly established in order to minimise neighbourhood noise pollution, Capital Sound were able to deploy a similar set-up as in 2014, with minor tweaks to the delay towers and a raising of the main sidehangs to 12.5m from the stage.

For the main stage, the PA inventory comprised two hangs of 16 x MLA and 1 x MLD Downfill per side, with 12 x MLA and 1 x MLD Downfill for the sidehangs. The sub array consisted of 21 x MLX in a broadside cardioid array, with a further 11 enclosures back facing. Additional W8LM Line Array enclosures provide front fills, while an array of LE1500 floor monitors were also provided for artist monitoring.

Capital's Martin Connolly, project manager for the main stage, commented, 'Although the decision to raise the trim height was made late in the day, one advantage was that [Martin Audio application engineers] Andy Davies and Chris Pyne could look at predictions and optimise this in the software, without needing to make any physical changes.'

The area behind the FOH tower and barrier positions had been changed to improve sightlines, necessitating changes to the delay design. This was extended to four lines of in non-concentric arcs (occupying nine positions). The main nine delays comprised 7 x MLA and a single MLD Downfill, supported by a total of 12 MLX subs - whilst delay positions 10 & 11 each deployed eight MLA Compacts.

Connectivity to Martin Audio's VU-NET/Ethernet control network, running the dedicated Merlin matrix processor, was via an Ethernet tunnel over Optocore. System engineer Toby Donovan was full of praise for the new 1.2.5 version of VU-NET and the improved latency. 'The new version of VU-NET lets you monitor every amplifier channel and allows you to send more data over the network. I can see every channel in real time and it's really accurate.'

In fact this 'Master Overview' function provides a customisable screen giving level and limiting information for every cabinet in every array alongside quick access to key functions (unlike previous versions). In Hyde Park this feature was running with over 150 connected devices spread over the vast Ethernet network.

At the source were two rack PCs and laptop sitting on the Ethernet network, connected to a pair of Avid Profile digital mixing consoles which could flip-flop with a DiGiCo SD11. Any input or group of inputs could be routed to any output with VU-NET providing full control of Merlin via an intuitive GUI running on the PC.

Martin Audio systems were also provided for two other stages. On the Barclaycard Stage, eight MLA Compacts were flown on each side with 16 x WS218X subs in a broadside cardioid array, with four W8LC providing front fill sound reinforcement.

The only indoor stage was the intimate 200-capacity Sony Unlimited Tent, which was serviced by Martin Audio's tried and trusted package of four pole-mounted MLA Mini enclosures per side, atop an MSX power plant, covering the low end.

'After three years, we have now evolved a successful formula to optimise the audience experience [at Barclaycard presents British Summer Time Hyde Park],' summarized Paul Timmins of Capital Sound. 'Thanks to the unique functionality of MLA, historic problems with noise escape are now a thing of the past and what FOH engineers can focus upon and enjoy is their mix in perfect clarity while their artists fully entertain every one of the 65,000 crowd.'