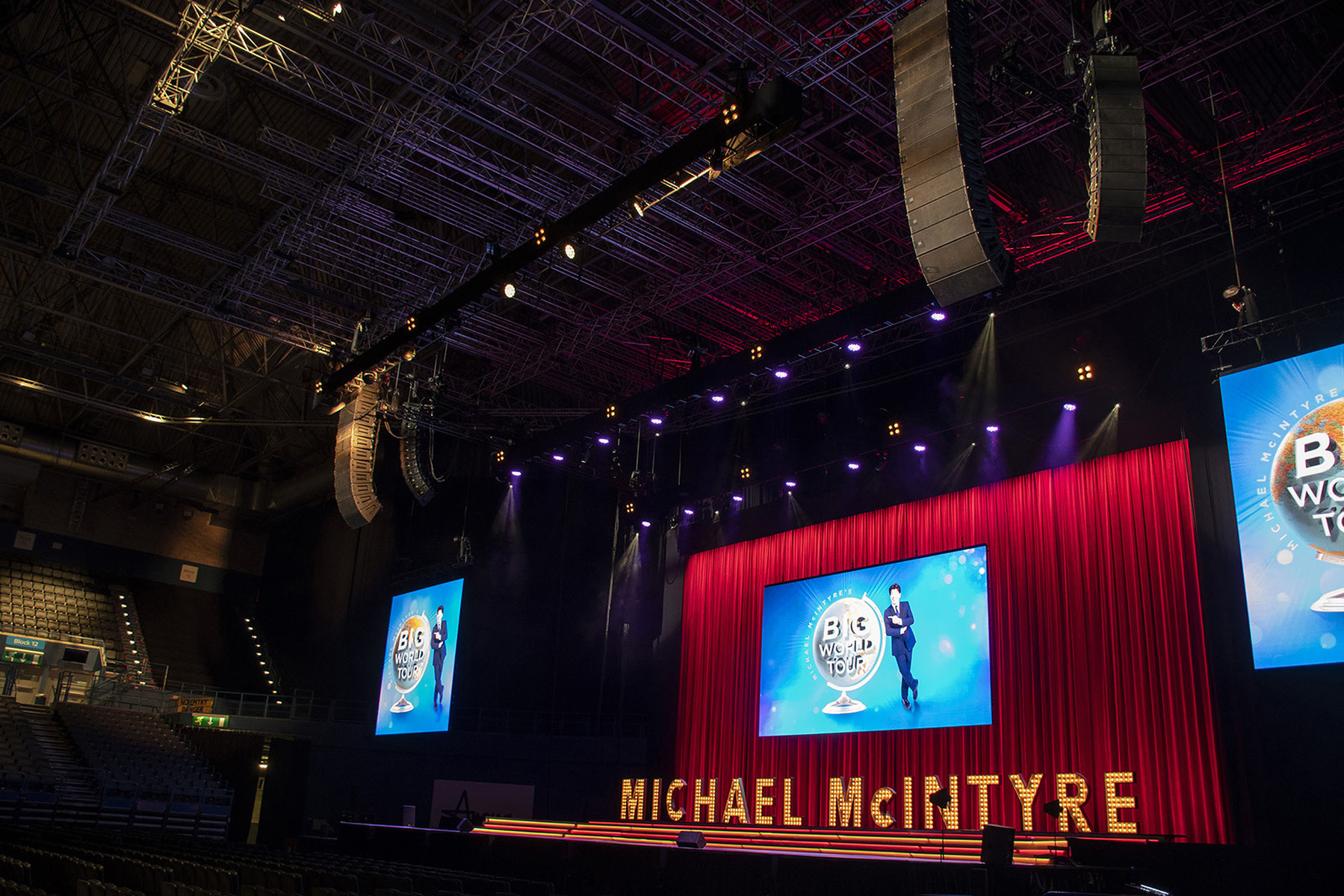 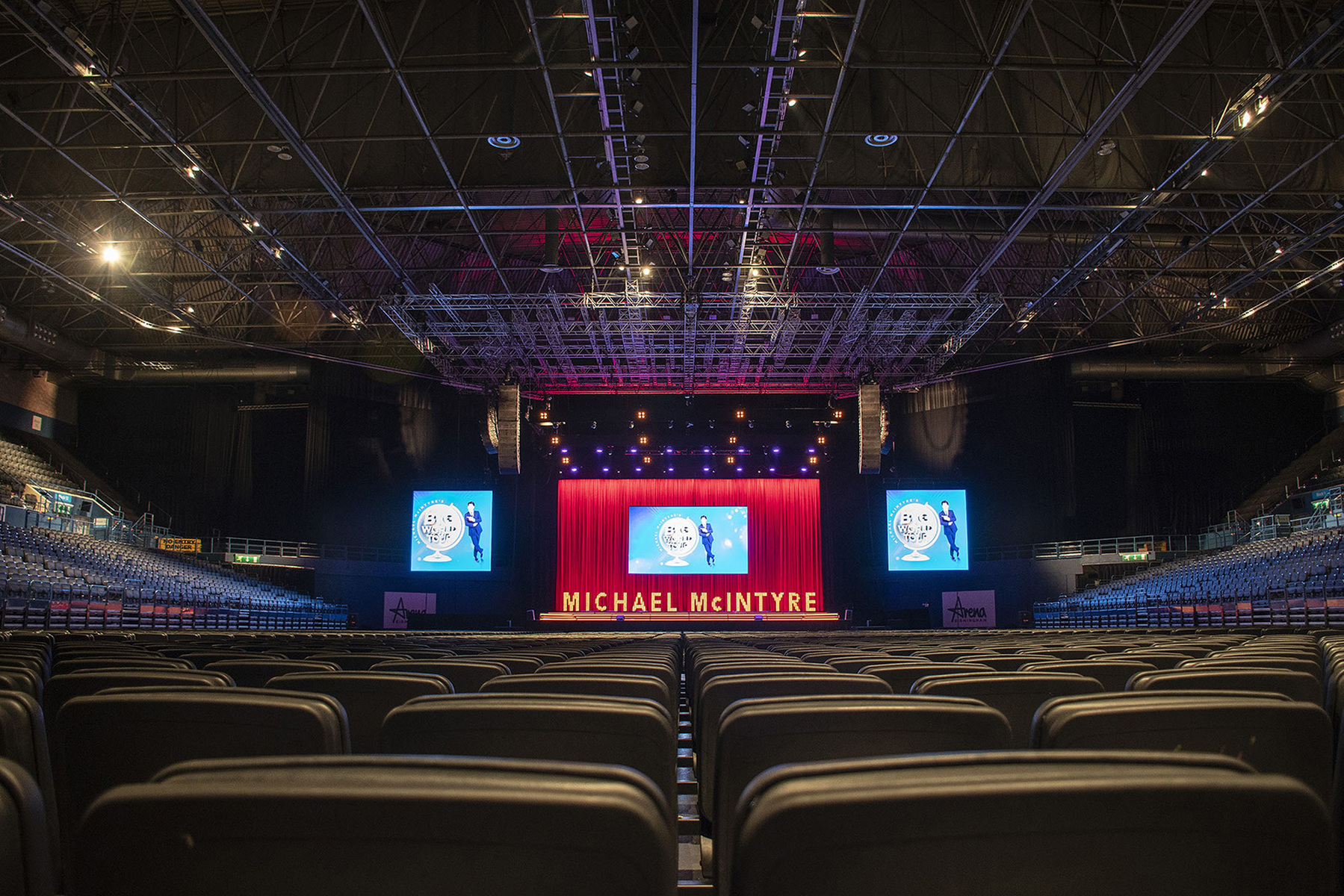 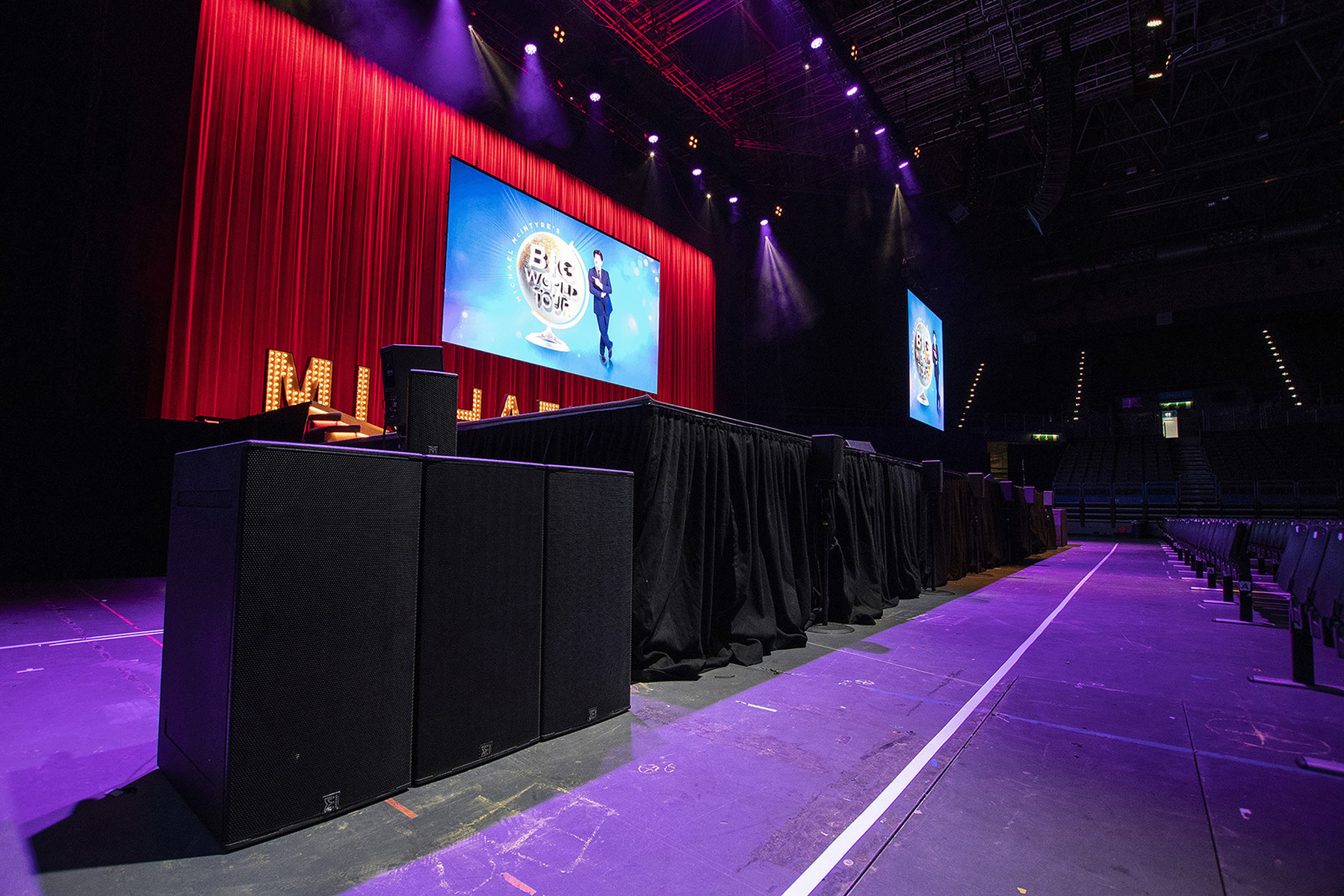 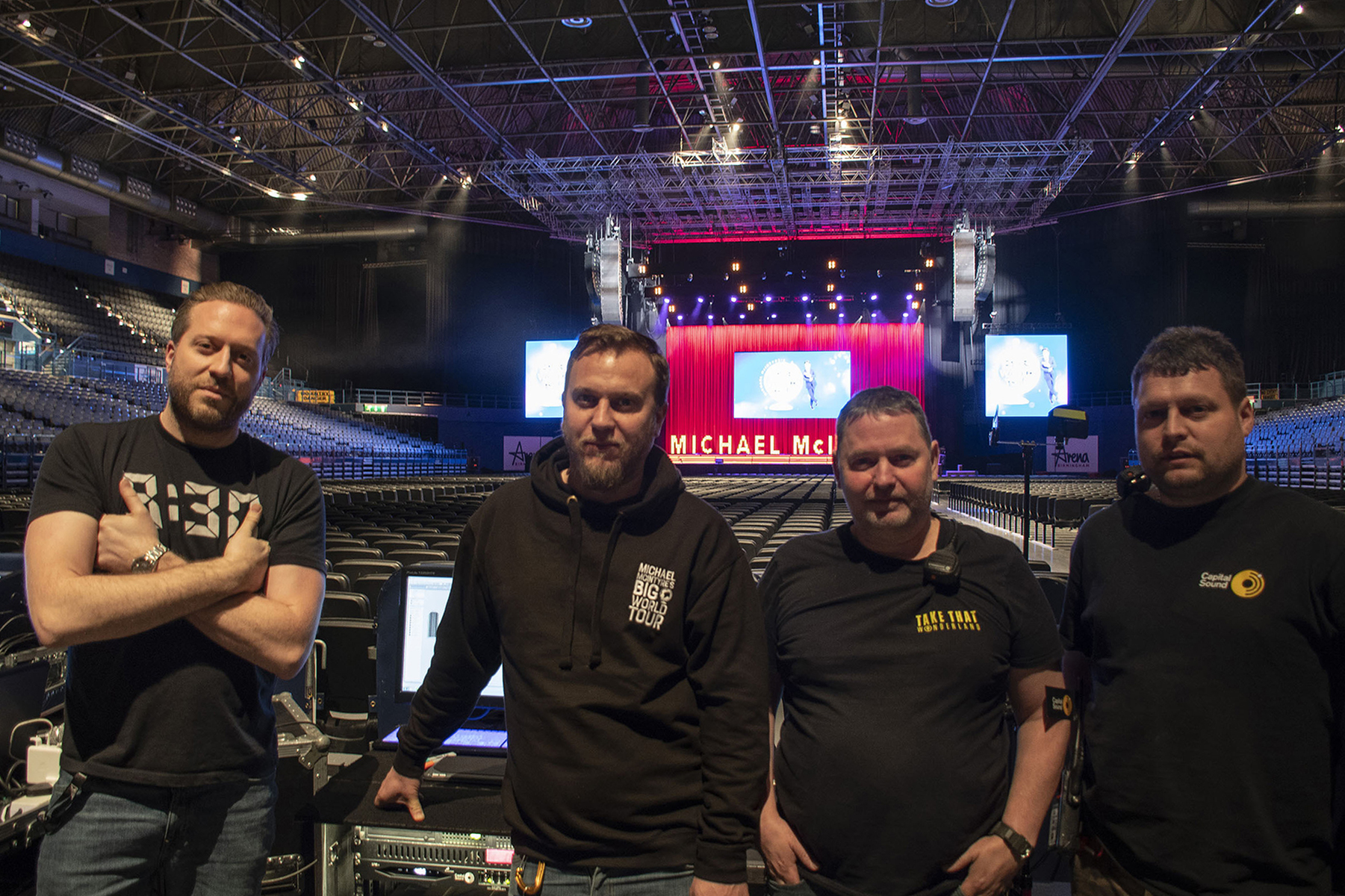 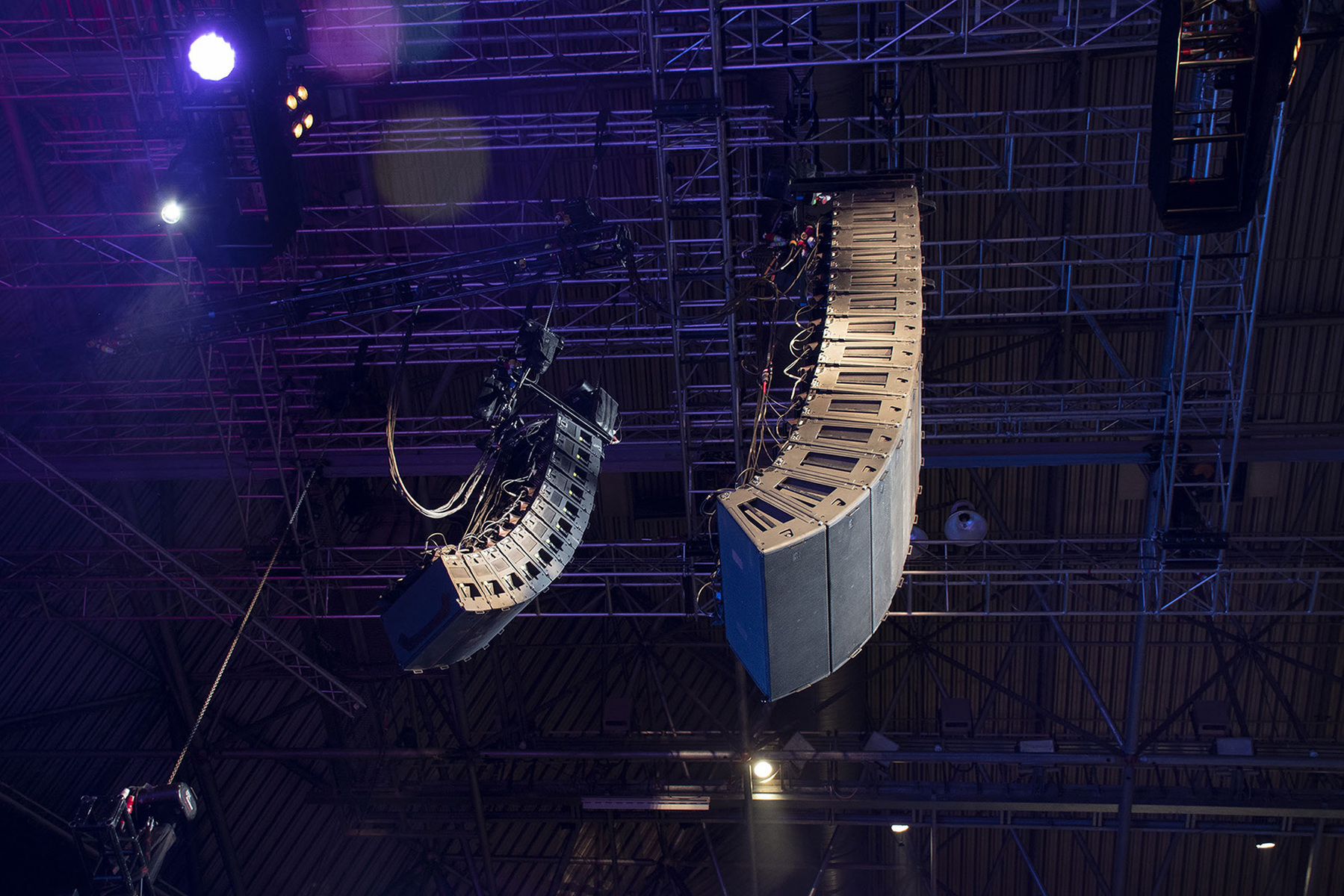 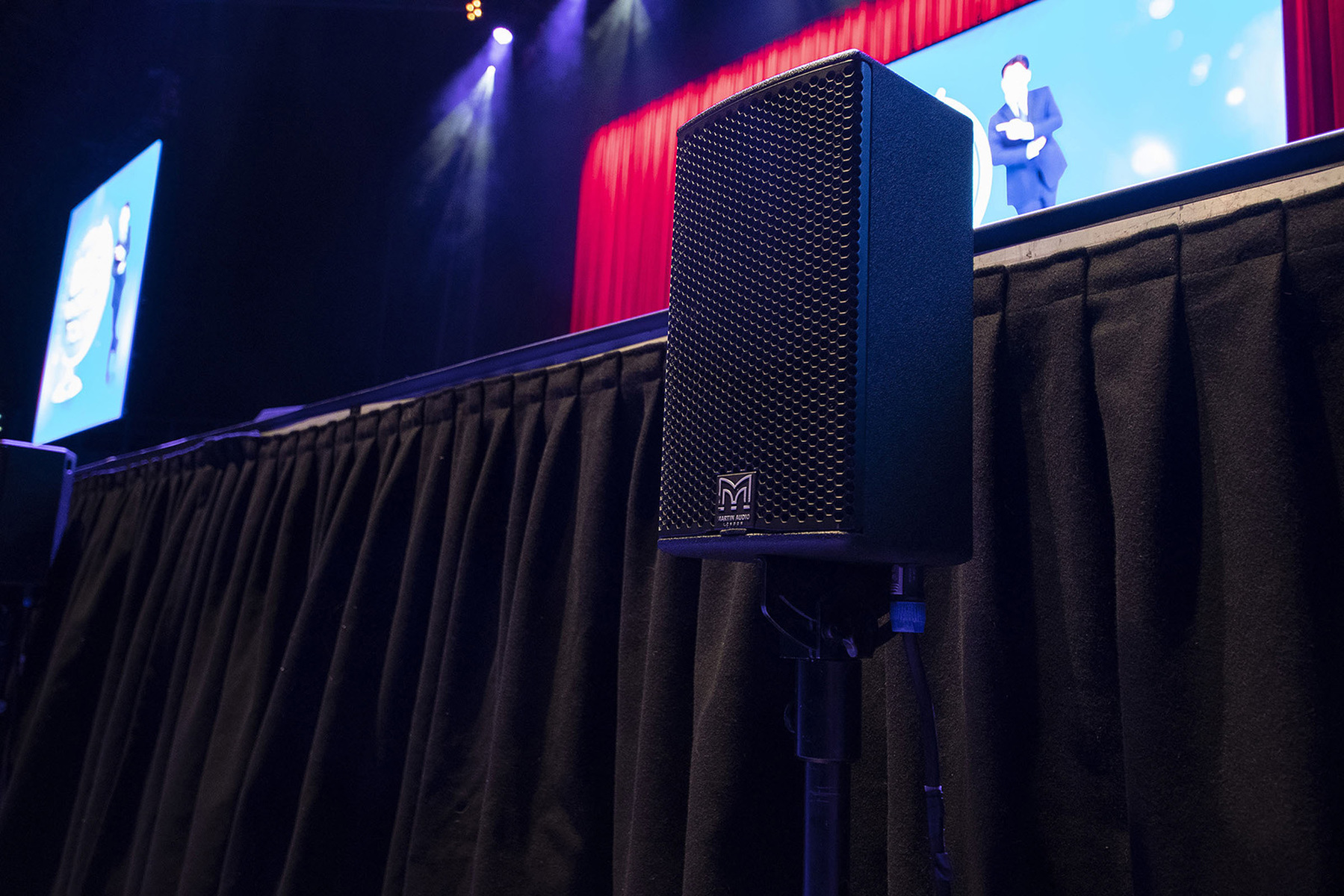 Stand-up comedy, for all its apparent simplicity in projecting the spoken word to large theatre audiences, can be anything but straightforward. The real challenge is to deliver an intimacy through coverage consistency and intelligibility because if the audience misses one word, the joke's not funny.

Martin Audio loudspeaker arrays have proved their worth time and again, reinforcing a multiplicity of Tier A stand-ups — none more so than Michael McIntyre. In 2015 they successfully deployed an MLA loudspeaker array via their rental partners Capital Sound for the artist’s Happy & Glorious tour, and they have repeated the formula for the current Big World Tour. With the exception of play-in/play-out music, this is 100% spoken word.

This time around the comic had a different team shaping and powering his sound in the form of FOH engineer Steve Carr and system tech Toby Donovan — both seasoned MLA practitioners.

Rigged at the 15,800-capacity Birmingham Arena was the larger of two scalable Martin Audio PA rigs from the MLA series. This comprised 14 MLA and two MLD Downfill elements per side, with 12 MLA Compact providing outfills from each stage wing. Providing necessary LF extension were six of Martin Audio’s new SX218 subwoofers, in two groundstacked blocks of three, while eight of Martin Audio’s tiny but potent stand-mounted DD6, were able to set an even coverage pattern across the first four rows. According to Donovan, this is largely due to their use of differential dispersion technology. In large arenas such as Birmingham three blocks of six W8LM Mini Line Array handle delayed sound at the rear.

Down at the stage, a pair of DD12 are tilted on Martin Audio yokes to deliver the sound at face height — providing a constant point-to-point reference to McIntyre’s many excursions back and forth across the stage.

"MLA delivers a linear response and is perfect, while the DISPLAY software ensures we avoid any reflective surfaces."

In fact, along with the newly-purchased SX218, of which this was one of their first deployments, the use of DD12’s as monitors — suggested by both Carr and Donovan — has been a masterstroke.

As Carr explained, “When I first met Michael he said how important foldback was; he likes to hear himself loud and clear, so he doesn't need to push his voice and we decided that DD12 as low-level side fills would be ideal.” Toby Donovan added,“Previously we had flown speakers for monitors but there was a desire to lose these because they looked untidy, and if you fly them too high they are not really functional. The DD12s sound so good and the dispersion is perfect. There is no problem with gain before feedback wherever he is, including lying on his back leaning over the edge of the stage. The speakers are always in the same place with every show so he gets consistency.”

Although this is the sound team’s first tour with McIntyre each has vast experience at amplifying stand-ups, and in working with production manager, Neil McDonald (Katherine Jenkins in the case of Steve Carr) and so it was a natural fit. Coupled with this Donovan has all the presets for the arena circuit stored in the Martin Audio software. He also has alternative presets to ensure the sound remains fully optimised depending on whether the entire venue is sold out or specific balcony areas have been screened off. The fact that coverage can be fine-tuned electronically in-situ to cope with changing conditions and last-minute changes, without the need to re-rig, remains a key benefit of the MLA system.

“The real challenge with stand-up,” says Donovan, “is that we have to spend more time trying to avoid unwanted reflections whereas music shows can be more forgiving. Fortunately, we can comfortably deal with issues like slapback in the software.We can also minimise reflections by attenuating the signal and compensating with the delays for those at the back.”

As for the new subs he says, “They are new out of the box, and because this is a brand new design they look smart and not too obtrusive.”

Carr only requires a 16-channel DiGiCo SD11 for his house mix, and also provides the monitor mix from FOH. In summary he said, “My approach was to make sure audiences hear Michael the way they would on telly. The room plays a big part in this — but I didn't want to start hacking out frequencies because of the room.

“MLA delivers a linear response and is perfect, while the DISPLAY software ensures we avoid any reflective surfaces. As for the DD12 monitors, Michael said these have made a massive difference.”