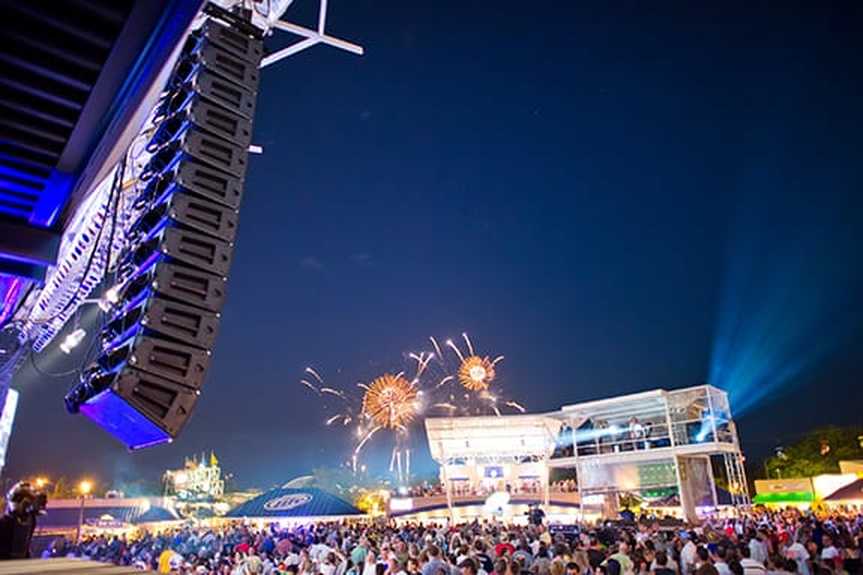 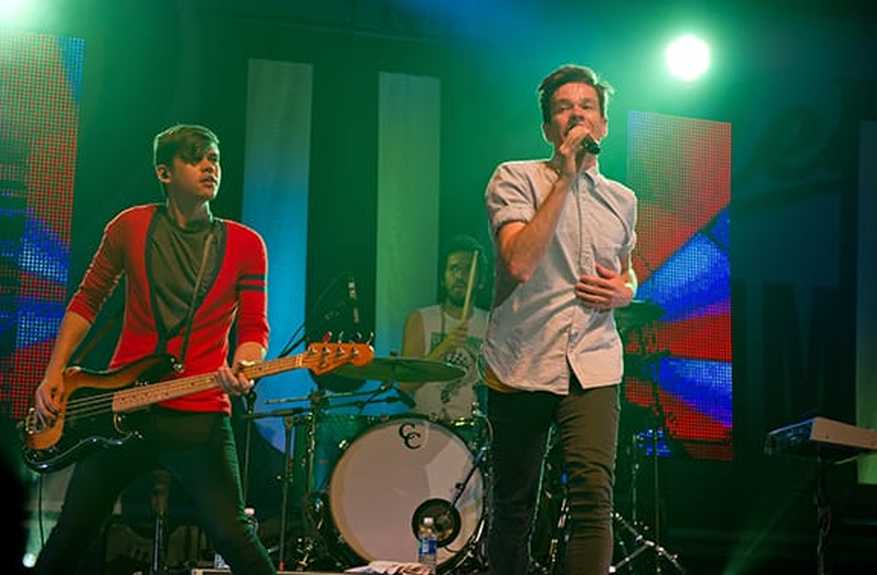 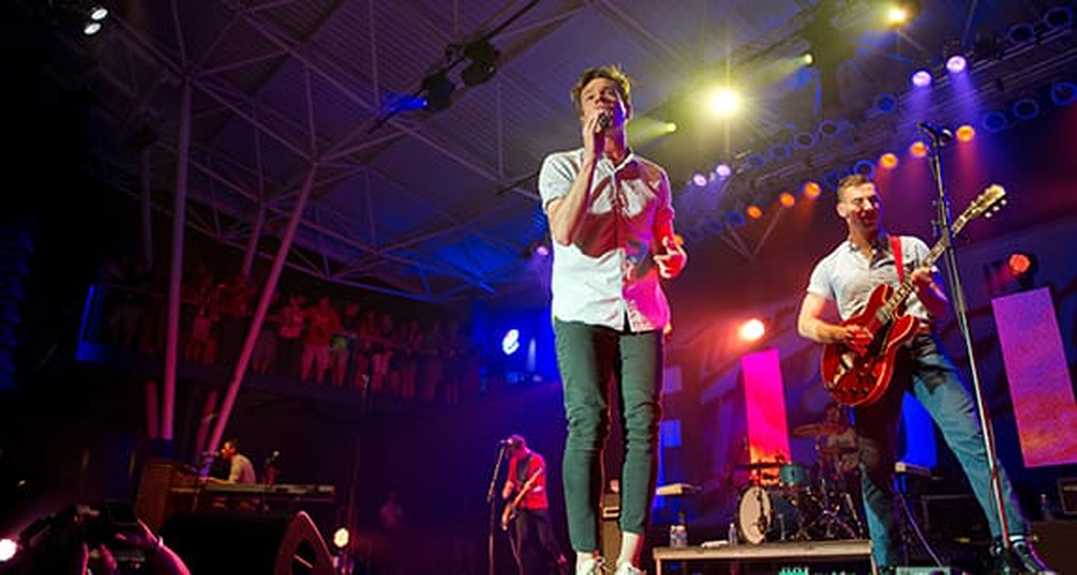 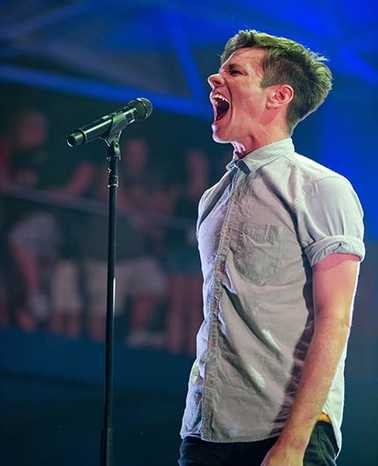 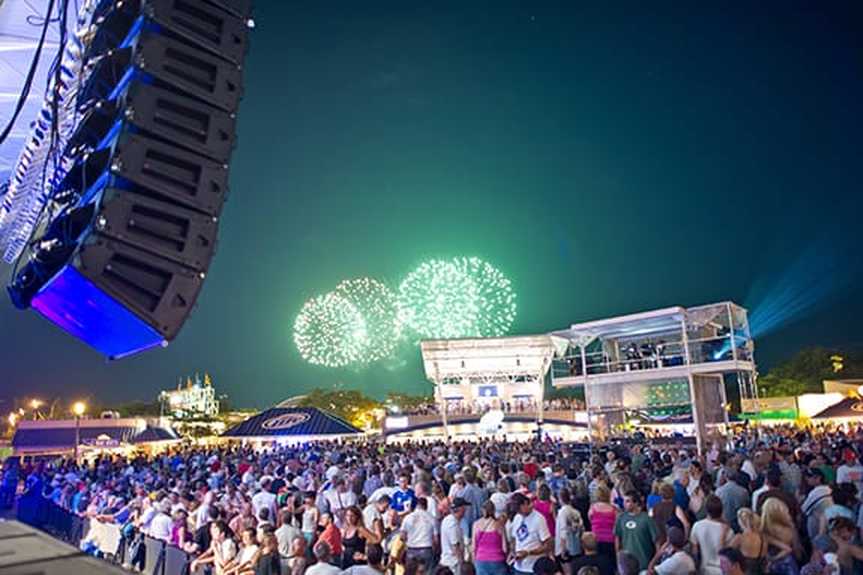 CLEARWING TEAMS WITH MLA AT SUMMERFEST

Guinness World Records-certified as 'The World's Largest Music Festival,' Summerfest was held at the 75-acre Henry Maier Festival Park along the lakefront in Milwaukee, Wisconsin. The massive music event lasted for 11 days, included 17 stages, the 23,000-capacity Marcus Amphitheater and performances from over 700 bands that drew close to a million fans.

For over 16 years, Clearwing Productions has handled the daunting challenge of coordinating sound, light, staging and logistics for the festival with the quality, professionalism and attention to detail they're known for.

Making its debut at the Summerfest Miller Lite Oasis Stage was the Martin Audio MLA (Multi-cellular Loudspeaker Array) 36 that consists of 11 MLA and one MLD downfill cabinet per side along with 12 MLX subwoofers.

The lineup at the Oasis stage included an eclectic mix of artists such as the popular new alternative band Fun., Kool & The Gang, Joe Walsh, Ziggy Marley, The Roots, Cake, Sublime with Rome, Atmosphere, Paul Oakenfold, Robyn, plus Rodney Atkins and Garry Allan from the Country Throwdown Tour.

Designing a loudspeaker system that could provide exceptional sound quality and coverage for all those types of music without spillage onto adjacent stages played a large role in determining MLA as the system of choice.

Asked about the setup, MLA Support Specialist Jim Jorgensen says, 'We went with 12 MLA per side rolling out at 63 Hz to keep as much low end in the main array as possible and used the subs as more of an effect. One of the goals of this particular event was to maintain the coverage in a specific area, which MLA is really designed for.

'In terms of the low end response,' continues Jorgensen, 'Ziggy Marley's 'engineer first brought up the system without the subs on and he was happy. When he added in subs, the ear-to-ear grin on his face was priceless'

According to Jorgensen, 'One of the main things that people experienced using MLA was that the PA never got in their way. They didn't have to spend hours tuning it. No one turned it on and thought it wasn't going to work or we needed to change anything to get the sound and coverage we were looking for.'

In terms of MLA's exceptional control, the crew used a daytime setting that covered up to just behind the mix position with -4 halfway through the picnic tables and a 'hard avoid' behind that to keep the volume at manageable levels for those walking past the stage.

The MLA night setting went all the way up to nearly four feet in front of the buildings with a 'hard avoid' past the restaurants in the back of the seating area so that festival goers could dance while standing in line but be heard when ordering their food. The MLX subs were stacked two high, three wide on the stage and delayed outside to inside to narrow the sub bass spillage and contain it to the area.

Reactions from FOH engineers to MLA for the different bands were 'uniformly positive,' says Jorgensen. Robyn's engineer said it 'was pokey in all the right places,' which in Scottish audio speak means it stood out where it was supposed to. fun.'s engineer said it was the biggest sounding PA he'd ever worked with in that 'he kept pushing and pushing it, and it just kept getting bigger.'

'Clearwing's Steve Harvey (systems engineer-north stages) who had previous experience with Martin Audio's W8LC arrays quickly understood how MLA worked and was able to explain the system to other people while becoming an advocate,' adds Jim. 'He's quite sharp and has great ears, so he got it right away.'

Working in tandem with MLA were 12 Martin Audio LE2100 stage monitors and Wavefront enclosures for sidefill along with a Digico SD10 for FOH and a Yamaha PM5D for monitors, all provided by Clearwing.

In fact, 'Most of the stages on the grounds had Martin Audio wedges and fill speakers,' Jorgensen concluded. 'People were also talking about how well Zac Brown covered the Marcus Amphitheater with MLA during his show to a sold out crowd. It is impressive to see that MLA can go from a tradtional midwestern sized festival stage all the way to a full scale summer concert shed with the same coherence and coverage abilities. Basically, people throughout the event commented on the whole run as to how MLA was dynamic, it flexed and grooved, and adapted to the style of music coming out of it.'