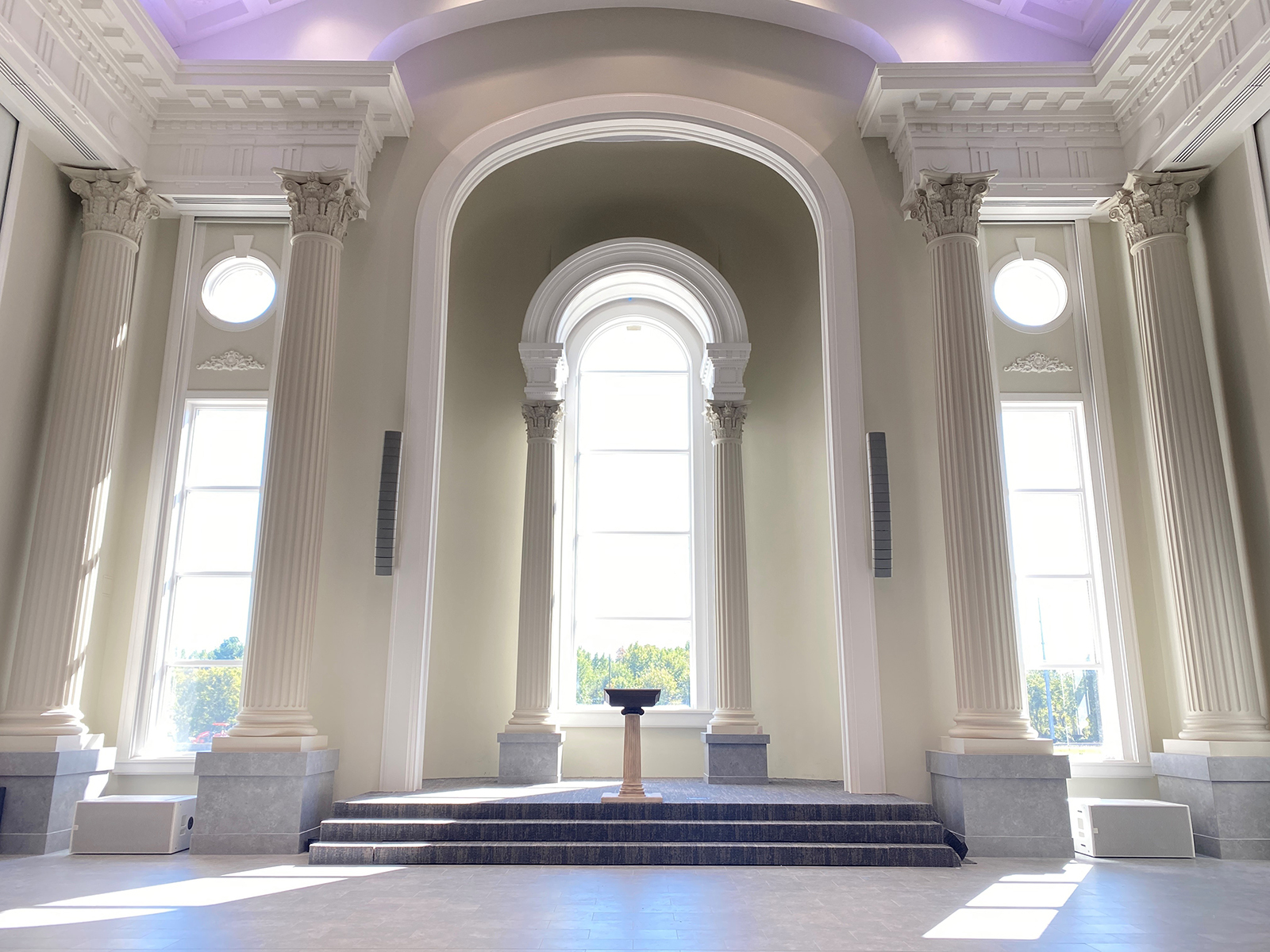 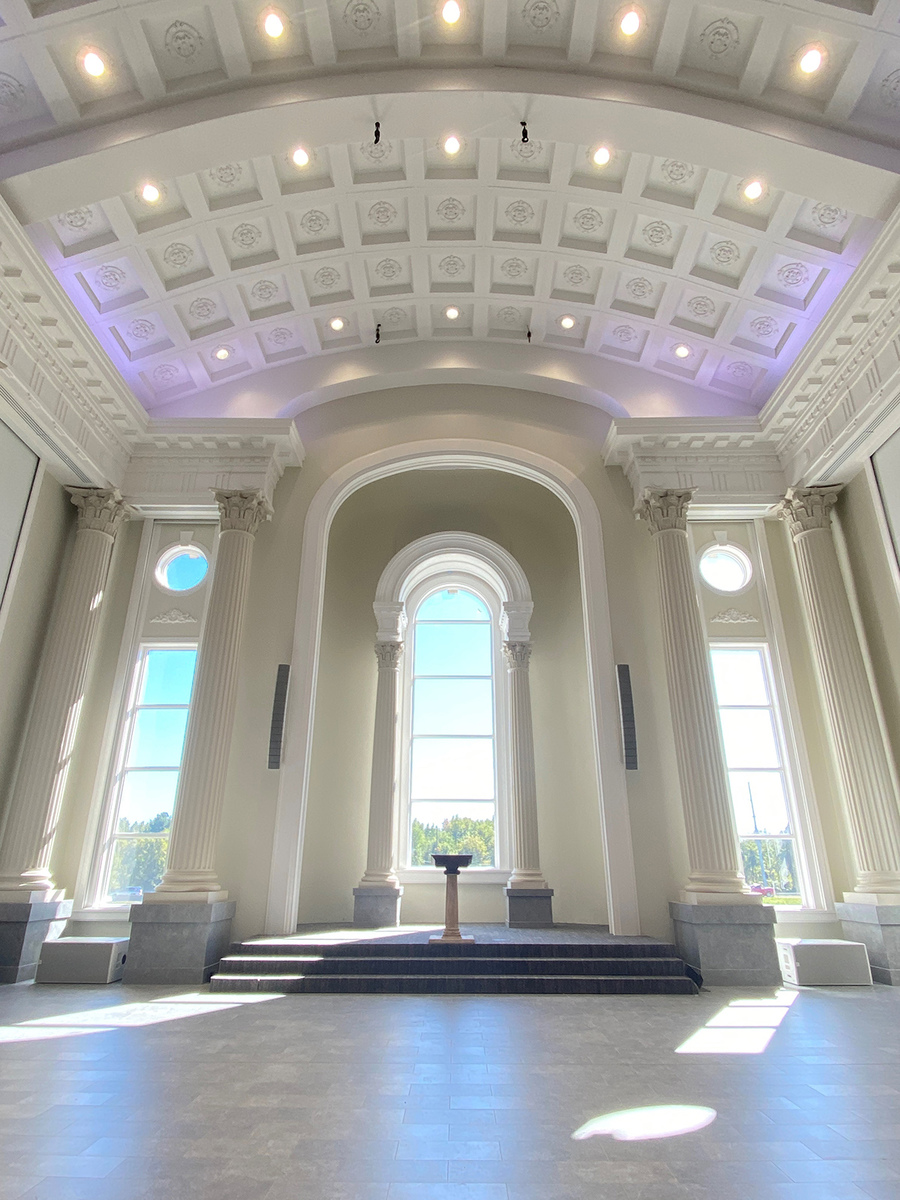 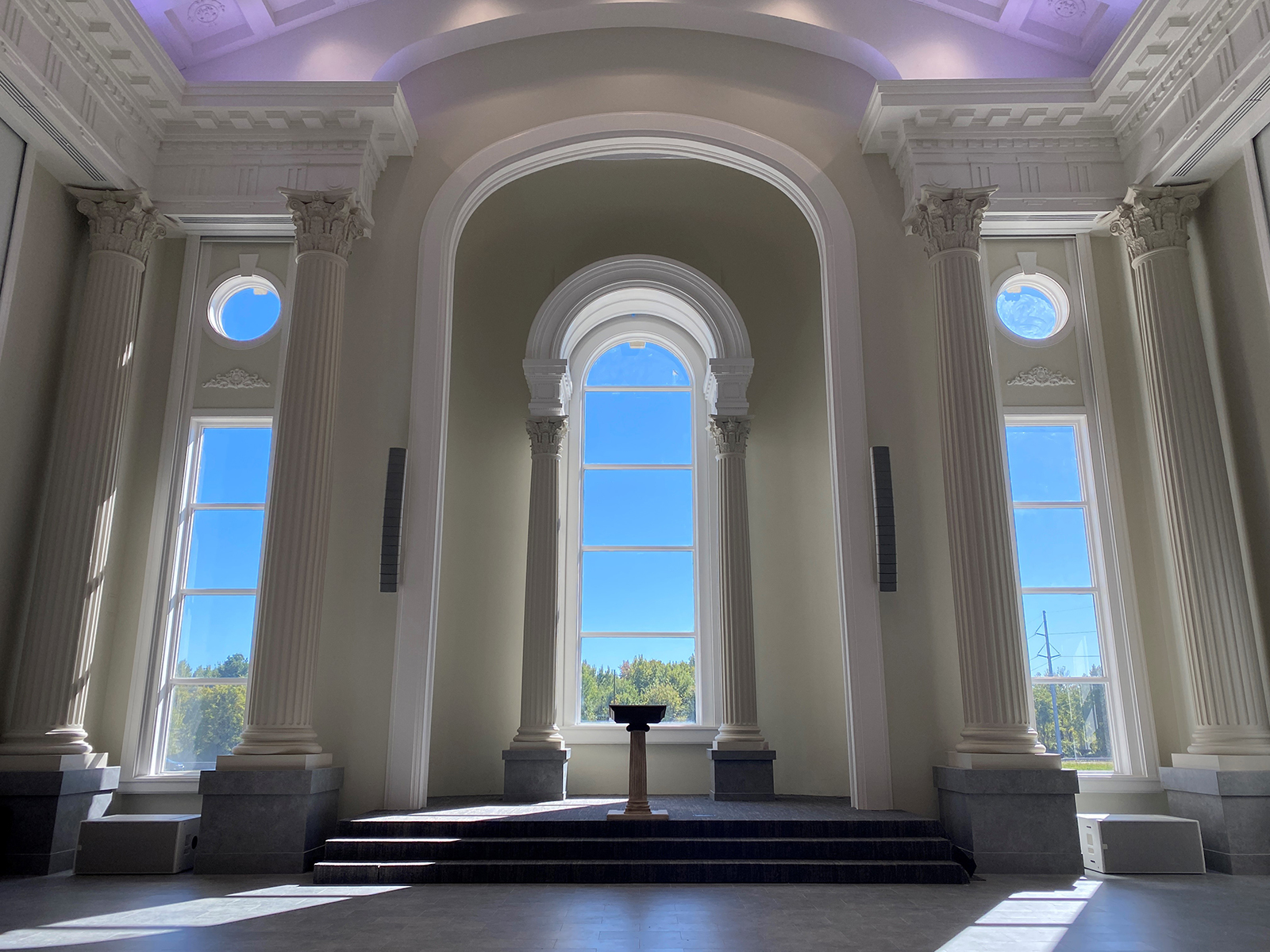 Fast forward to the present and the Church has added a new mid-size chapel on its campus for multipurpose use and brought in a new sound contractor. However, it has kept faith in the British brand that has served the community so well in the main church.

This time the PA needed to reinforce events that were “too large for our rotunda space, too small for our sanctuary, and not quite casual enough to be held in our Great Hall,” according to the Church’s Director of Communications, Zachary Ward.

With aesthetics a prime consideration, the solution was found in the House of Worship favourite, the discreet O-Line column micro array, specified and installed by Nashville-based Spectrum Sound. This provides balanced coverage for the 232 main floor seats and further 48 seats in the balcony.

Ward confirms that brand continuity was based on the “exemplary” Wavefront Precision performance in the main space. However, the decision was not taken before carefully scanning the market to compare options. “We considered multiple brands and models but ultimately it was Spectrum Sound who, after seeing the space, recommended we take a look at O-Line, a product which none of us had even heard about at that point.”

He added, “The new room presents an auditory challenge as the floors are of tile and the ceiling is more than 40 feet high, creating quite a reverberant space. Added to that is the need to reliably produce clear, intelligible speech during a sermon or dinner involving a speaker while also being capable of producing rich, vibrant music and vocals during a time of worship. We feel that the Martin Audio system accomplishes these demands well.”

O-Line is unique because it allows the flexibility of a traditionally curved larger line source, but in a package that fits a space like this chapel much better aesthetically. And adding Martin Audio’s Wavefront Precision magic really optimises what is po

To achieve this, Spectrum has provided two hangs of 16-deep O-Line, run in 2-box resolution from a pair of Martin Audio iKON iK81 amplifiers, with a pair of white floor-mounted SX218 subs placed unobtrusively between a couple of large floor-to-ceiling columns, powered by an iK42.

Spectrum Sound sales manager, Ken DeBelius, who had arranged the original presentation, gave his reasons for recommending O-Line. “Although there are a number of column-style small-format line-source arrays using 2” or 3” drivers, no other brands can match this, especially when considering the overall vertical coverage scalability required in this project.

“O-Line is unique because it allows the flexibility of a traditionally curved larger line source, but in a package that fits a space like this chapel much better aesthetically. And adding Martin Audio’s Wavefront Precision magic really optimises what is possible as to the acoustical radiation from such a compact solution.”

Operating in different live touring and installation sectors, the HoW market segment forms a major part of Spectrum Sound’s Systems Integration division. However, the FPCNLR project represented not only their first deployment of O-Line but their first Martin Audio installation experience. Prior to installation they pre-assembled the systems in their workshops and flew them at trim, to test performance. “We were happy with the sonic result right at the outset and adding the dual 18” subs made it a truly full range system,” DeBelius continued.

However, his team were mindful of the considerable acoustic challenges. “The mostly hard, reflective architectural surfaces provide an obvious challenge for any system for amplified speech or music. This system needed to have as precise polar radiation as possible, to keep the overall room reverberation managed and under control.”

The other challenge was presented by the separate upper balcony seating section. “I was loath to add a set of delay fill loudspeakers, once again with aesthetic considerations being a major concern. Thus, the main arrays needed to be capable of projecting up into the balcony, and this they did extremely well.”

Tuning and design were carried out via Martin Audio’s proprietary DISPLAY software, using construction drawings and on-site measurements. In addition to powering the main system, the spare channels on the 4-channel amplifier were wired with stage connectivity for use with passive floor monitors. “For now, the system is being driven analogue by a small mixing console, but later on—with the upgrade to a larger console—they can drive the system via Dante directly into the iKON amplifiers,” states Ken DeBelius.

In summary, the installer said that Spectrum had managed to meet not only the aesthetic requirement with O-Line but also delivered listeners with “good direct-to-reverberant ratios for their live amplified program content. The small size, combined with the controlled directivity of the compact Martin Audio O-Line, provided the perfect solution to solve both of these challenges for this room. That, plus the fidelity and overall sonic character of these arrays were an added bonus,” he exclaimed.

Zachary Ward was equally effusive. “We are extremely satisfied with the performance of O-Line. With such a unique room, including 42ft-high ceilings and several stained-glass windows reaching more than 28ft tall, O-Line provides even coverage and clarity while accomplishing our main goal, preserving the overall aesthetic of the room.”

He said their design approach was largely unconventional. Rather than incorporate AV/lighting solutions into each phase of the design, they strive to realize the Pastor’s visual, structural and implementation goals first and foremost. “We then ask our lighting and sound teams to design a system to fit the room. O-Line has certainly proven itself capable of meeting the demands placed on it by the unique aspects of our design and installation needs.”