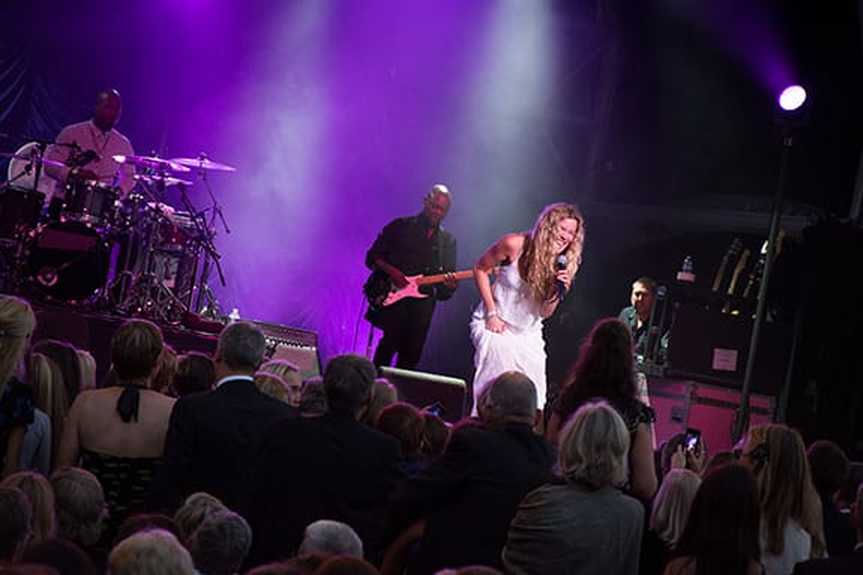 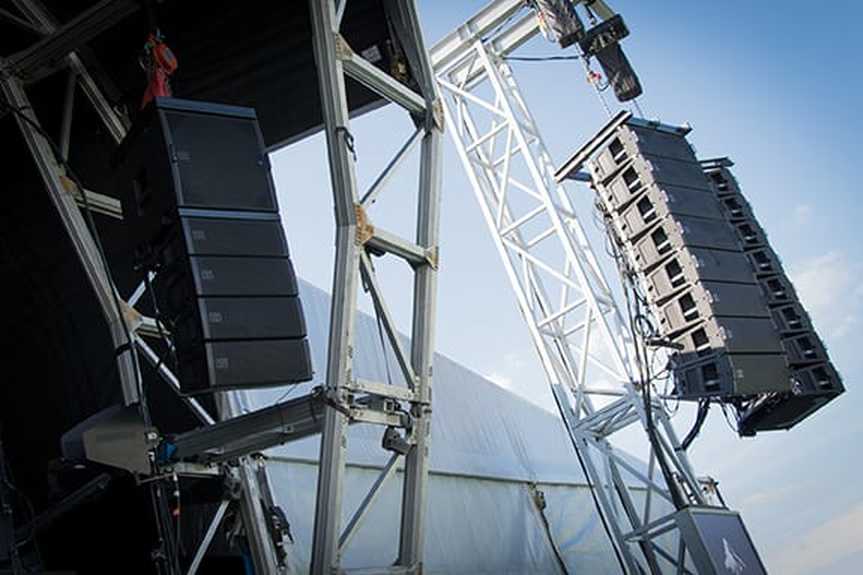 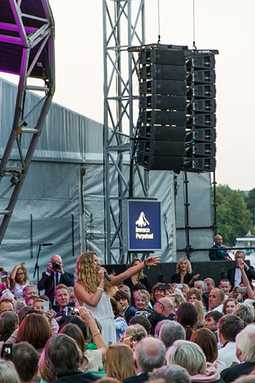 The 32nd Henley Festival proved to be a logistical triumph for the event's long term PA contractors, RG Jones Sound Engineering, and a sonic one for the Martin Audio system they were deploying for the first time at the event: the MLA Compact.

On the upside, the organisers had overturned the decision to relocate from the wonderful site on the banks of the Thames that has been their permanent home for three decades - meaning that RG Jones could call on pre-existing site data; on the more arduous side, their Martin Audio MLX subs had just returned from the Pyramid Stage at Glastonbury Festival and gone straight on to a Tour de France event in Trafalgar Square.

The theatrics of Arcade Fire at Glastonbury had filled the grilles with pyrotechnic residue, necessitating the grilles of the subwoofers to be resprayed. Given the tight turn around time between Trafalgar Square and the Henley load-in, this was an unwelcome extra task for the warehouse crew since kit aesthetics form an essential part of the Henley brief - all cables need to be invisible and enclosures in soigné condition as they join the fastidious and formally attired company of the elite that make up the Henley audience.

For RG Jones senior engineer Simon Honywill, two essential ingredients had changed: the specification of the MLA Compacts, replacing last year's large format MLA, meant that more elements could be deployed to increase control while reducing the footprint, and secondly, the experienced technician was able to take on system tech duties for the first time, as artists almost exclusively brought their own sound engineers.

A 30-year veteran of the event, Honywill remembers the day when the Festival was all about classical music, and the 'Floating Stage' comprised the old Henley Regatta judges barge, bobbing about on the water. Today, a full-blown Edwin Shirley concert stage is anchored to the riverbed, and the programme represents the biggest cross section of acts imaginable performing over the five days (Floating Stage headliners were Bryan Ferry, Joss Stone, Burt Bacharach, The Jacksons, Rebecca Ferguson and The Overtones).

Another RG Jones senior executive who has seen the event evolve is account manager and company director, Andrew Williamson, who was detailed to the festival as soon as he joined the company 23 years ago. He again appointed Jim Lambert as production manager, with the two men working alongside John Harris, the overall site production manager.

With the constant flotilla of boats moving along the Thames to form a shimmering backdrop, the Floating Stage remains the key destination, as up to 5,000 people a day throng to the Festival.

However, the riverfront physics are less friendly. While the coverage length extends well over 100 metres - beyond either side of the grandstand - the FOH mix position is only 20 metres from the waterfront, immediately against the front of the grandstand, a useful legacy from Henley Regatta.

'With such a shallow but very wide site, it is very difficult to ensure even coverage right up into the corners of the grandstand,' Honywill commented. 'It's always been an issue, from right back in the mid 1980's when I first got involved. With MLA Compact, however, we are able to optimise the system to deliver very even SPL and frequency response right up under the lip of the grandstand roof – not possible with a conventional system without the use of delays.'

Andy Williamson reinforced the difficulty in being able to point the system far into the furthest recesses, given the low overhanging roof. 'But it was a complete success,' he said. 'The MLA system was uniquely able to achieve that.'

Overseen by RG Jones' Damion Dyer, RG Jones deployed four 8-deep MLA Compact hangs on the Floating Stage - an inner left and right and an outer left and right, with a mono signal feed to the outer hang. Four of the reconditioned MLX subs formed a portrait mode stack either side 'which we bent electronically through 120°.'

Reducing the MLA footprint further, RG Jones then turned to MLA Mini for left and right infills, with four (plus an MLX sub) flown each side. In addition, they used a four MLA Minis as a centre hang and a further four for front fill, deploying the factory preset provided specifically for that purpose.

In addition, RG Jones fielded more Martin Audio kit in the form of W8LM Mini Line Array and WS218X subs in the Salon, along with some DD6 for infills, and W8LMs groundstacked in the Indigo dance tent, with MLX subs.

In conclusion, Simon Honywill confirmed what he has said many times in the past. 'There is no other PA system than MLA - the others are all dead to me. MLA Compact was tidier and in this situation gave us greater control due to longer line length over the big system - and Compact itself is only 1dB less sensitive than its big brother.'

Other RG Jones' personnel supervising key areas included Billy Birks (Floating Stage monitors) and Matt Sussex (stage). The Salon was run by Chris Ekers (another Henley veteran from the 80's) with Tim Wann assisting, and stationed elsewhere on the site were Phil Wright and Robert Powell.