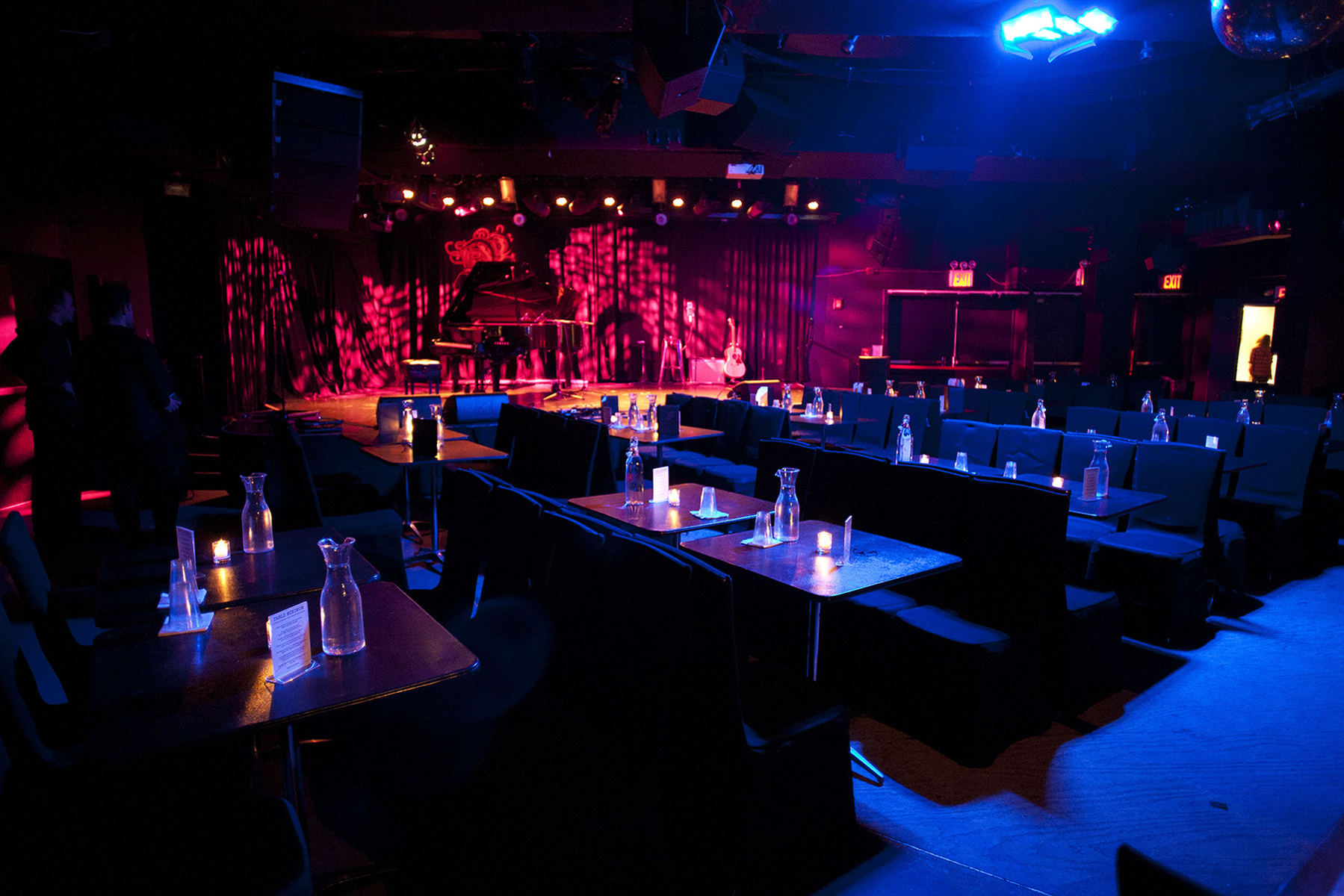 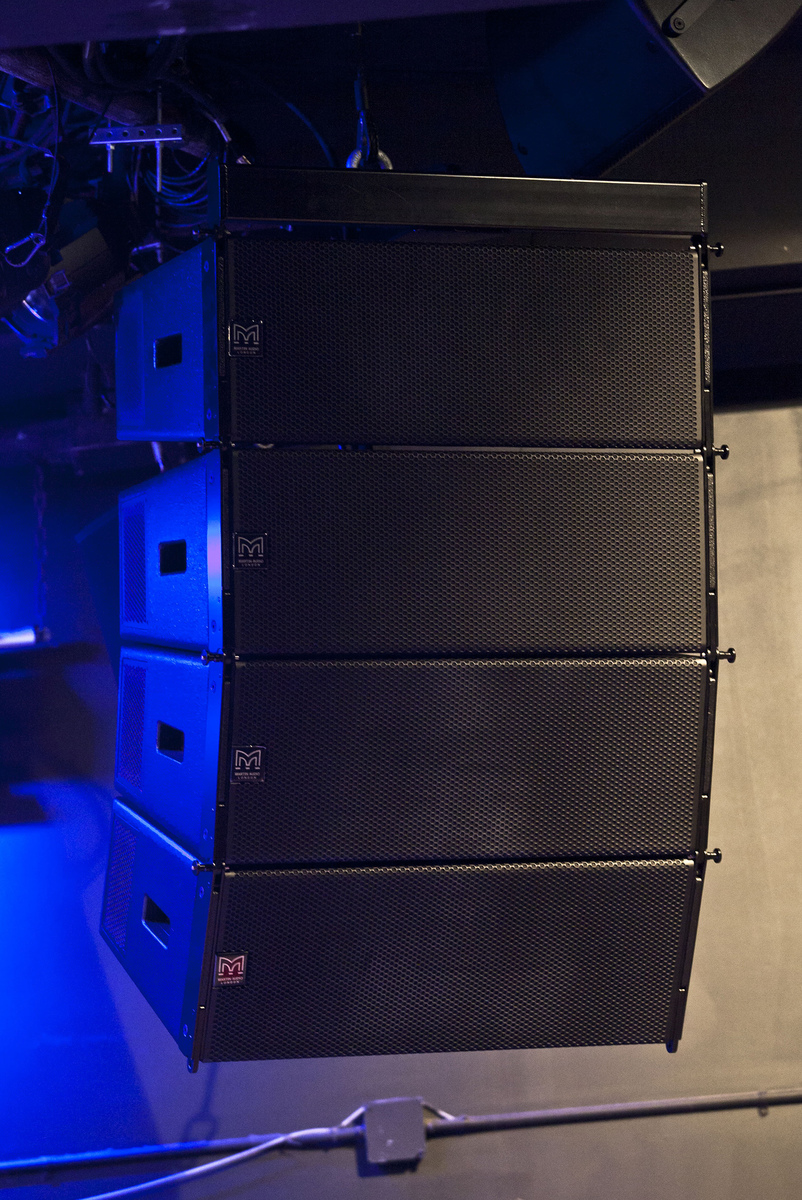 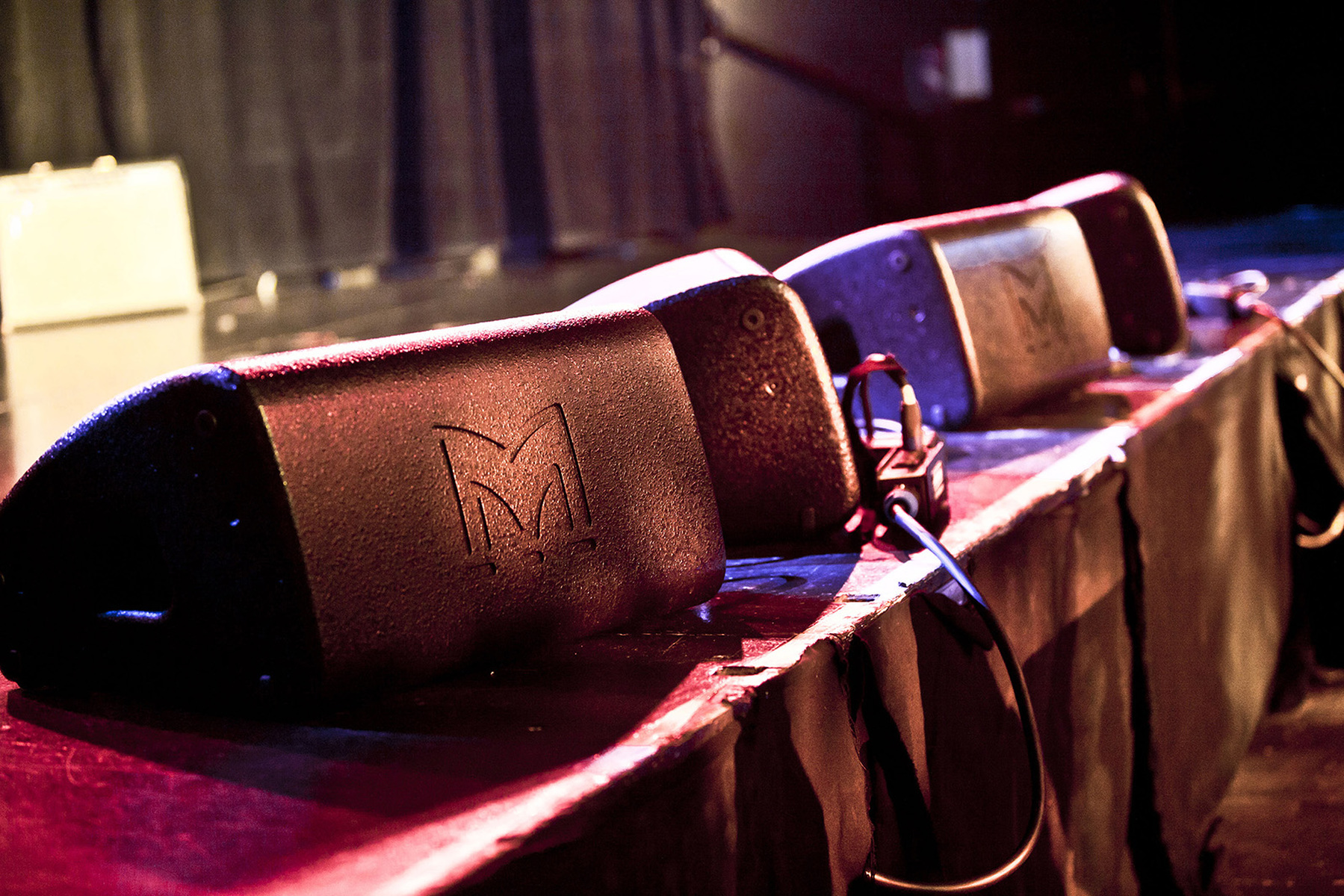 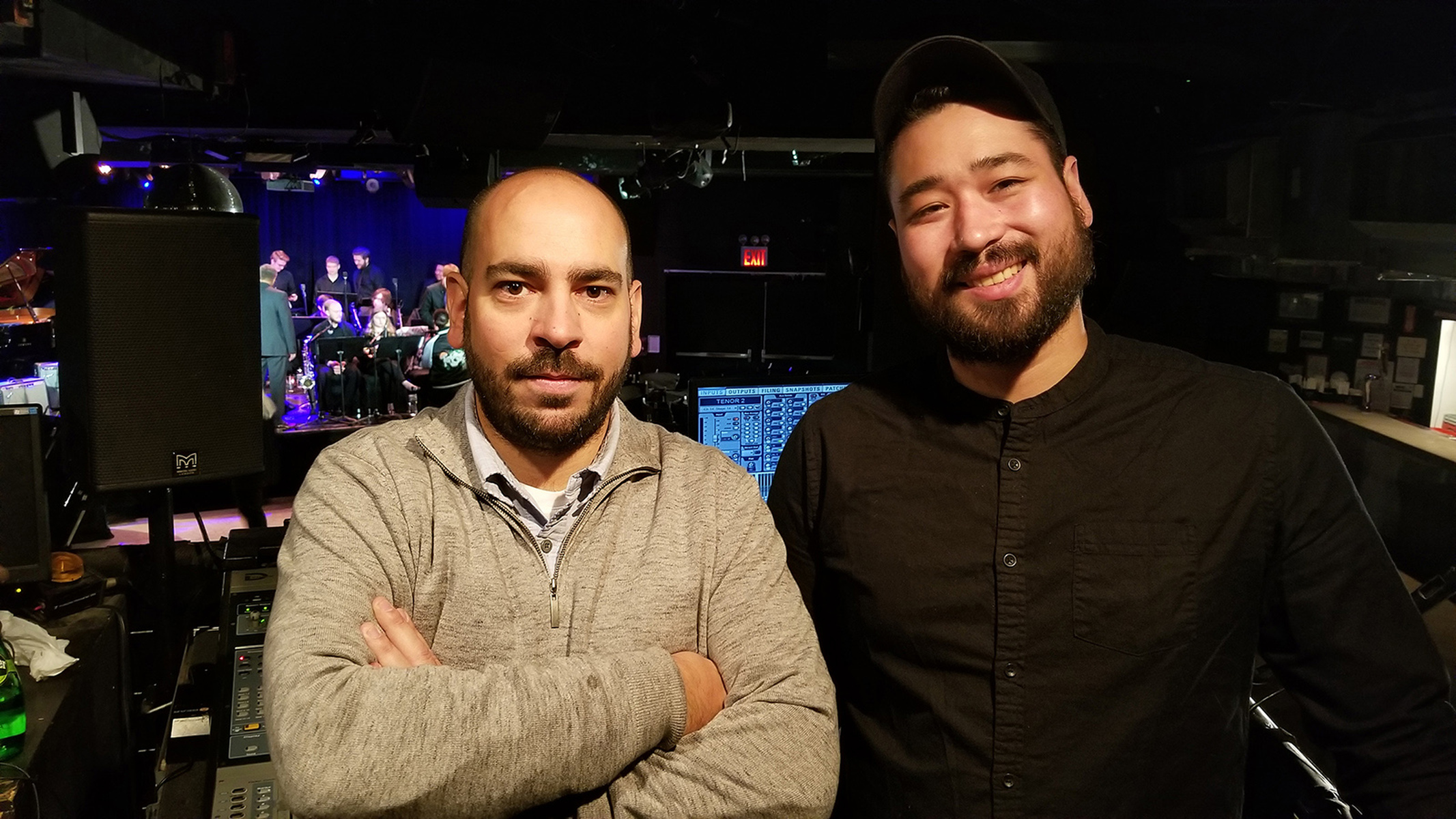 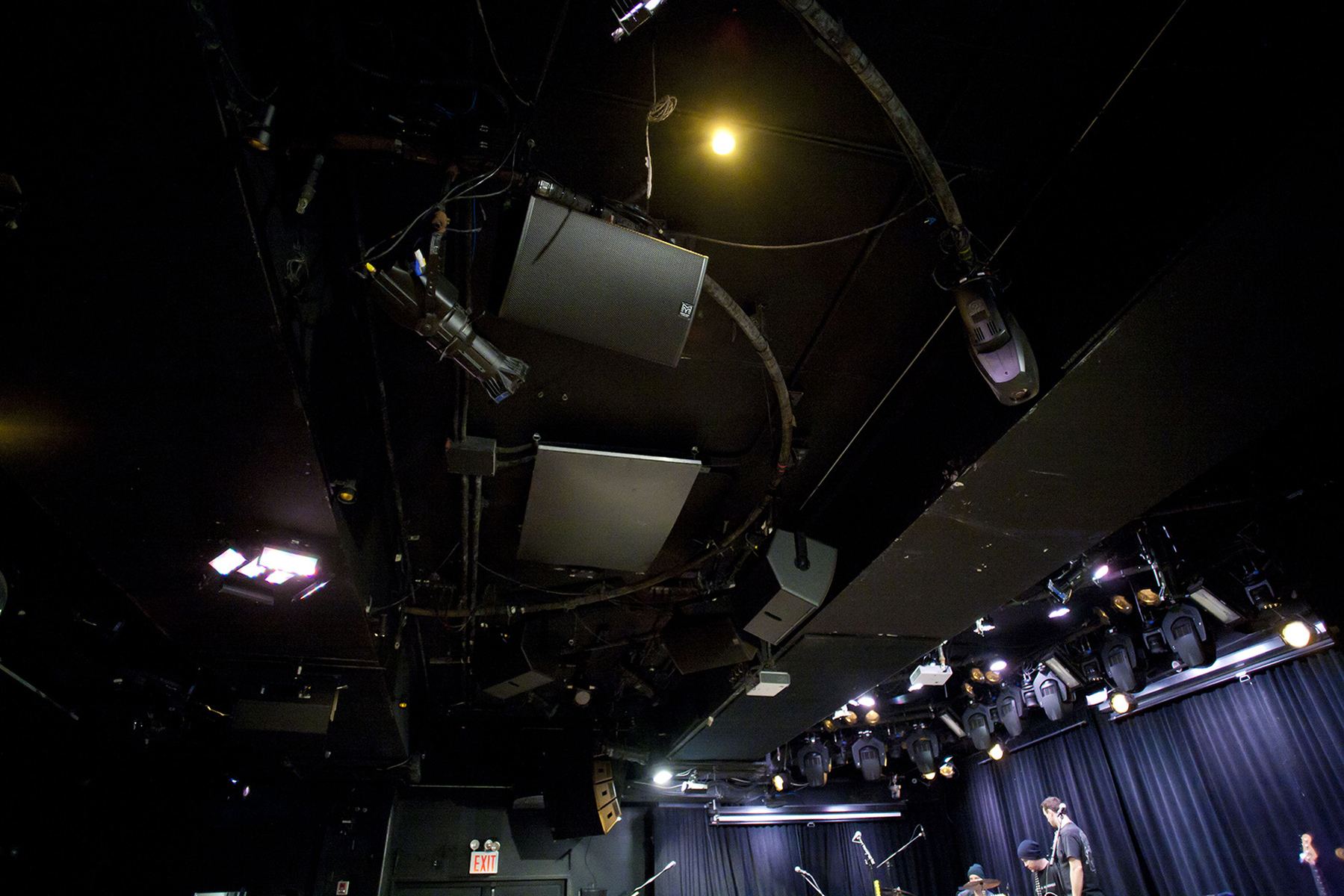 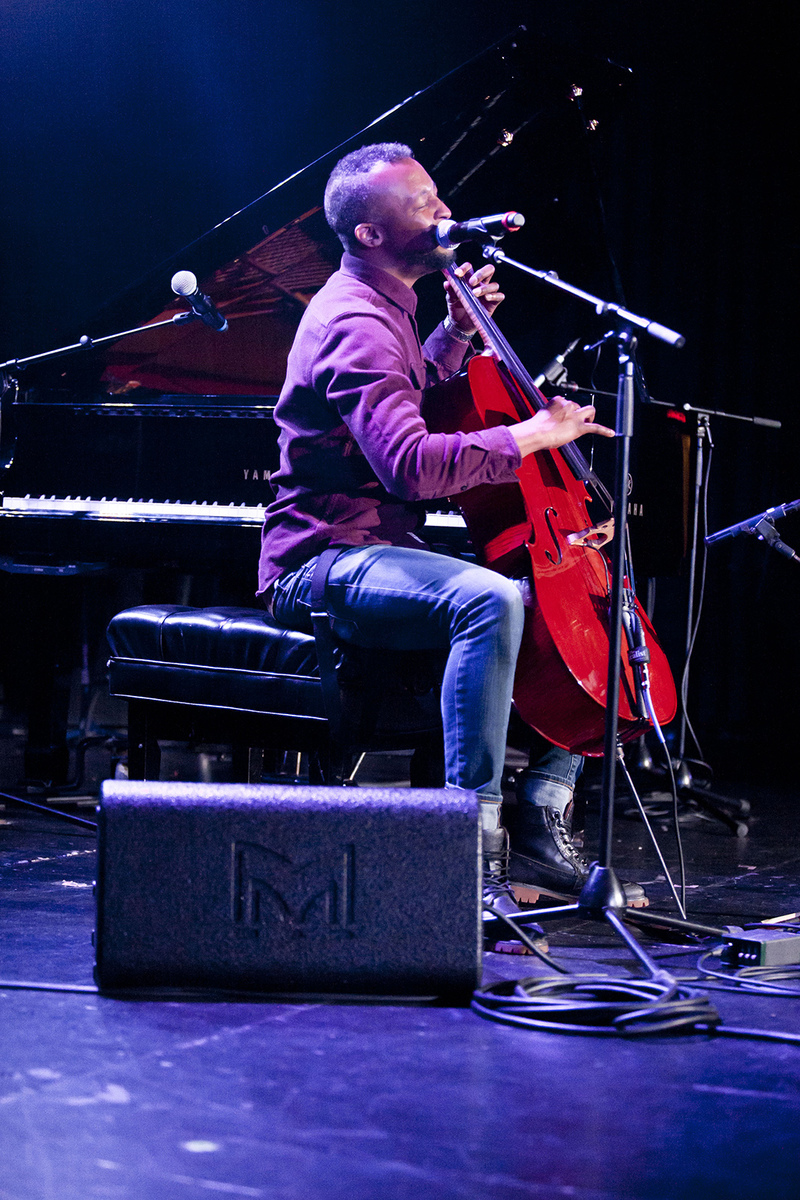 Celebrating its 10th Anniversary, the iconic music venue and multimedia art cabaret (Le) Poisson Rouge in the heart of Greenwich Village on the former site of the Village Gate is already legendary for its unique and eclectic synthesis of popular and creative culture in emerging music, theatre, film and fine art.

With “a mission to establish a creative asylum for both artists and audiences,” LPR’s performance spaces are designed to be highly adaptable in terms of seated, standing, in the round and other audience configurations depending on the artist, type of music, format, visual elements and level of immersion.

Considering the eclectic lineup of musicians, writers and composers who’ve appeared at LPR in recent years includes everyone from Lady Gaga, Yo-Yo Ma, Philip Glass, Iggy & The Stooges, Mumford & Sons, Kings of Leon, Norah Jones, Beck, Lorde, Salman Rushdie, The Shins, Sufjan Stevens, Laurie Anderson, Anthony Braxton, They Might Be Giants, the Kronos Quartet, Don DeLillo, Panic! at the Disco, and more, unlimited flexibility had to be an integral part of the genetic code of (Le) Poisson Rouge’s sound system.

Which explains why a recent re-design and upgrade of the sound system by Martin Audio’s partner, Frost Productions, led and engineered by Frost’s Installation Project Manager Jose Lima in collaboration with LPR’s Production Director Jay Eigenmann, has achieved an unimaginable level of flexibility for what is a complex, changing space in every sense.Audio quality first and foremost was a given – in this regard, Martin Audio was unanimously handpicked by Jay, Bernie Girman, LPR’s Production Coordinator, and David Handler, co-founder, after auditioning a host of products at Infocomm 2017.

The new system employs a full complement of Martin Audio that includes a Wavefront Precision Compact array, CDD, CDD-LIVE, CSX-LIVE and SX218/SX118 subwoofers, XE300 monitors and iKON power amplifiers, networked via a Dante system in a design creative enough to match the demands of any artist or performance.

Describing the venue, Jay explains, “LPR has two areas in the venue, the main space which is the principal performance room and a smaller satellite roo­­m––the 130-capacity Gallery Bar–– that can also be combined with the main space for larger events. The main space is a 700-capacity flexible performance area standing (350 capacity seated with standing room at the bar and around the perimeter) for corner stage configurations. When we do in the round, it’s a 600-standing room capacity, 300 seated and standing capacity with tables on the corner stage as well.”

Asked to specify the challenges implicit in LPR’s layout, Jose points out: “The main space is an asymmetric shape with the corner stage diagonal to the room and low ceilings. There’s an irregular ceiling with HVAC conduits running across the room with one in front of the House Right hang and one behind the House Left hang. There’s also a hollow circular dancefloor, and a stage made of steel deck modules. That, plus we had a very short turnover time, with the installation completed in 4 days, from taking down the old system to the first show. This required the crew to work around the clock to get it done in time."

"Engineers who’ve mixed on the new Martin Audio system have had very positive reactions about its fidelity, firepower, control and even coverage."

In the main room, the system starts with a PA hang for the corner stage with four Martin Audio WPC a side in 2-box resolution and a CDD-LIVE 15 as center hang/downfill with five SX218 subs across the underside of the stage. For in the round performances, the system used to consist of four multi-purpose speakers that had to be hung manually every time out and, according to Jay, “didn’t provide the firepower or coverage to do more aggressive shows. They were ok for quiet jazz shows and acoustic performances, but LPR does everything from spoken word or solo piano recitals all the way up to death metal, EDM and everything in between. Basically, anything you can imagine we’ve probably had and we wanted our in the round PA to be able to handle the same breadth and scope as our main PA.

“Now the system has evolved to feature a permanently flown ring of six CDD-LIVE 15’s in a 360º configuration around the 16-ft. diameter center stage that not only eliminates having to hang the speakers every time we go in the round, but also provides much more power and impact. The CDD-LIVE waveguide technology allows us to get even coverage throughout the room. With the additional horsepower to do those more aggressive shows, we’re able to take on almost any sonic challenge in the round.

“For the new design, we came up with four SX118 single 18” subs that could either be used as utility subs for corner stage shows, side fill subs, DJ subs and whenever we do center stage shows, they can be placed strategically under the in-the-round stage and face outward to cover the entire room while emanating from the center of the stage to have it sound coherent.”

The smaller Gallery Bar performance space is equipped with Martin Audio CDD’s, all powered by a single iK81 power amp. The main left/right hangs are a pair of CDD12’s in front of the modular stage (which is made up of three 4 x 8 decks) at the northwest corner of the room but can be moved based on the artist or type of performance.

A delay pair of CDD10’s can be either turned in-line with the mains as true delays or turned inwards for an immersive dance party experience. Also, two CDD10’s flown by the stage can be used as sidefills, or left-right when the stage is removed as reinforcement for dance parties or all-immersive events. There are also three CSX112 subwoofers to support the CDD’s built into the soffits under the tables with banquettes along the wall across from the bar.

A pair of elf-powered CSX-LIVE 118’s can be put on the ground directly under the mains and patched into the wall via Dante as full-range mains for concerts. They can also be stacked for dance parties to additional low-end support or taken into the main space for use as utility subs with subs in conjunction with the four SX118’s, for something like an electronic in the round show with six single 18s under the stage to match the flown CDD-LIVE 15s.

Underscoring some of the new system design’s high points, Jose points out that “with the Dante network, all areas are connected and we have the capability of routing audio from and to anywhere in the building while each speaker can be individually sourced for limitless zoning/grouping. Basically, there are three high-output, premium systems for three distinct areas: Mainspace corner stage; Mainspace in-the-round stage and the Gallery Bar. Delay speakers can be easily rotated for an immersive/surround experience, for effects or movie screenings while the monitoring system features 10 active biamp mixes of world-class Martin Audio XE Series monitors all powered by iK42 amplifiers, as well as two CDD-LIVE 15’s for side fills.”

“The main room has three CDD-LIVE 12’s used as outfills,” Jay concludes, “one is for the raised VIP opera box section, and two are used as bar fills. And there’s a CDD10 above the house right rig to cover an area off the stage where a lot of folks stand which had never been covered until now, so that’s exciting. We also have a pair of CDD-LIVE 8’s as stereo nearfields at FOH for our staff and guest engineers as it’s traditionally been different up top at the mix position than on the ground in the house.

“Engineers who’ve mixed on the new Martin Audio system have had very positive reactions about its fidelity, firepower, control and even coverage. I had one engineer dim the nearfields, turn to me and say it was one of the most pleasurable mixing experiences he’s ever had! Jose and the Frost team did an awesome job especially with all the challenges and were fantastic to work with – the results speak for themselves.”

Jose adds, “Jay cameto us with all these great ideas.I think we were very thorough in adapting them to a working design, and making sure we could achieve the ultimate goal of building a consistent system throughout the venue,eliminating any bad seats in the house. With Martin Audio’s sonic excellence on our side, it was translated into a system that is truly remarkable, and an absolute upgrade that is already raising attention in the NYC music scene. It was a joy to work closely with Jay and the rest of the LPR team on this one.”

Justin Kantor, co-founder, director of operations and classical music director of (Le) Poisson Rouge also weighs in: “You don't need audiophile ears to recognize a tremendous improvement with the new system right away."

David Handler, (Le) Poisson Rouge’s other co-founder concludes: “As musician-founders we know there is no more important thing to an artist and an audience than the sound of a performance.When I went down to Florida (for Infocomm 2017) to hear the system, I was struck by the warmth and natural breadth of the Martin sound signature.The system we chose gives us the audio versatility to match our eclectic programming, the integration we were looking for, and of course a sonic result that we feel is second to none in our space.”