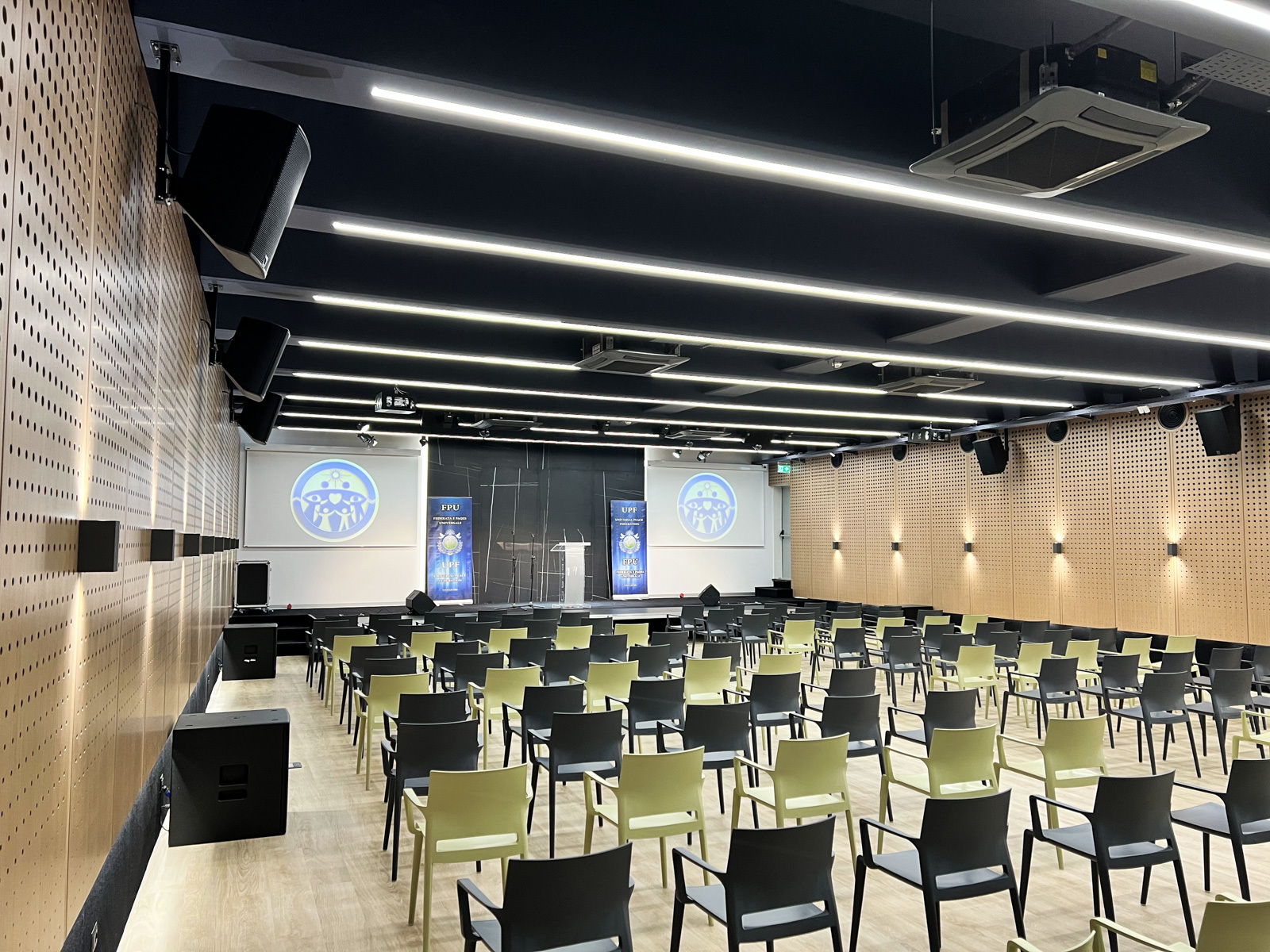 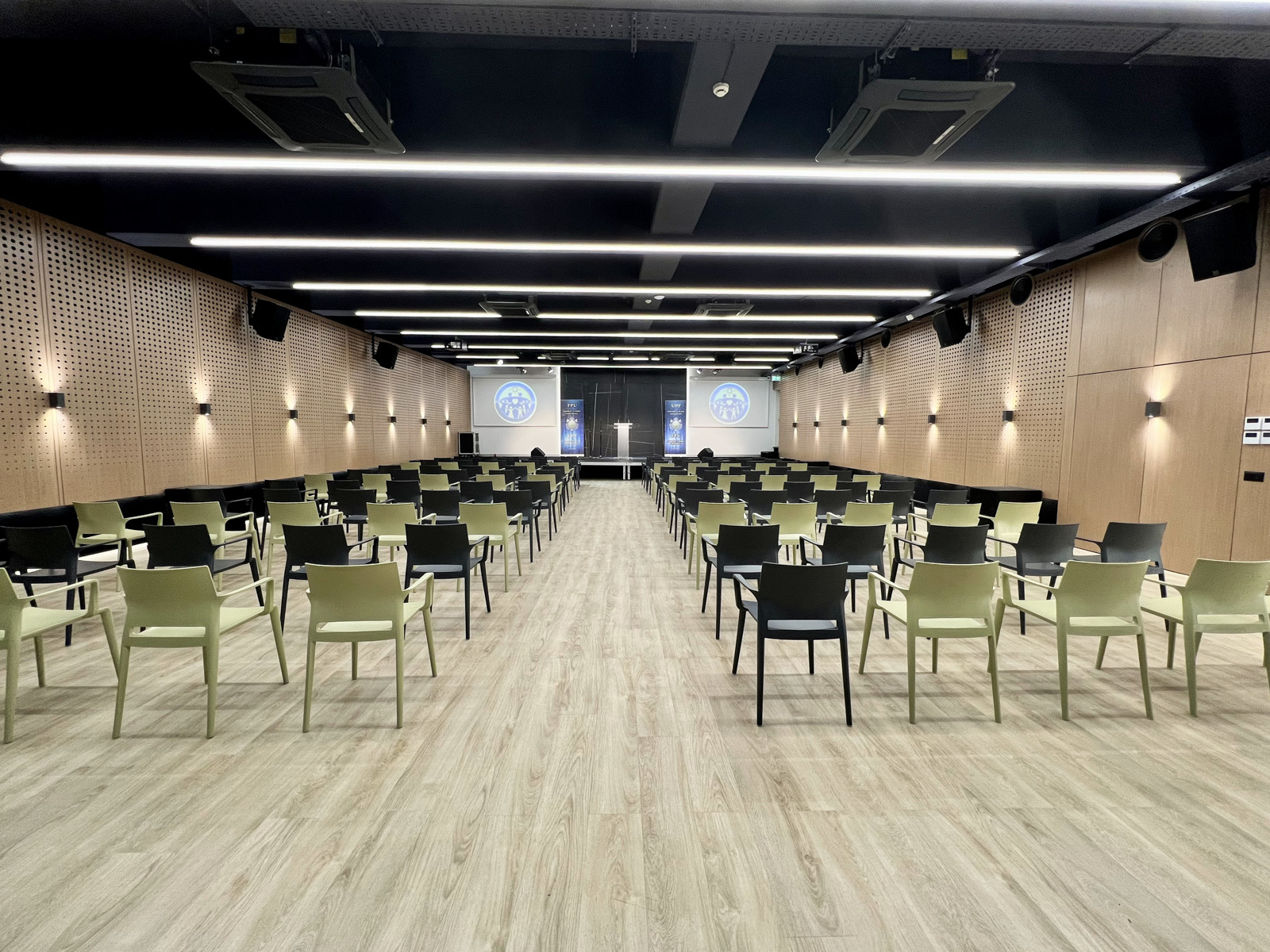 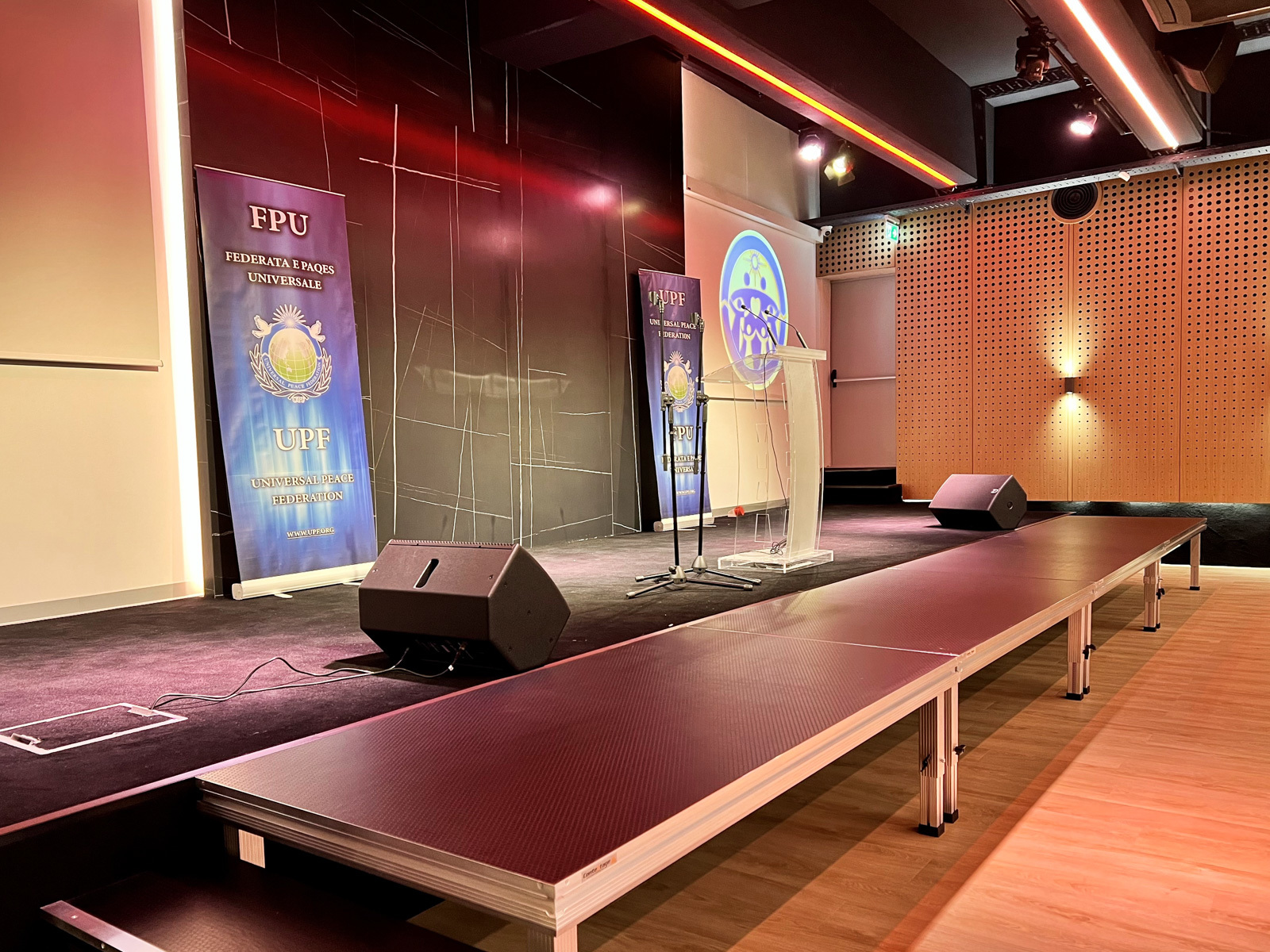 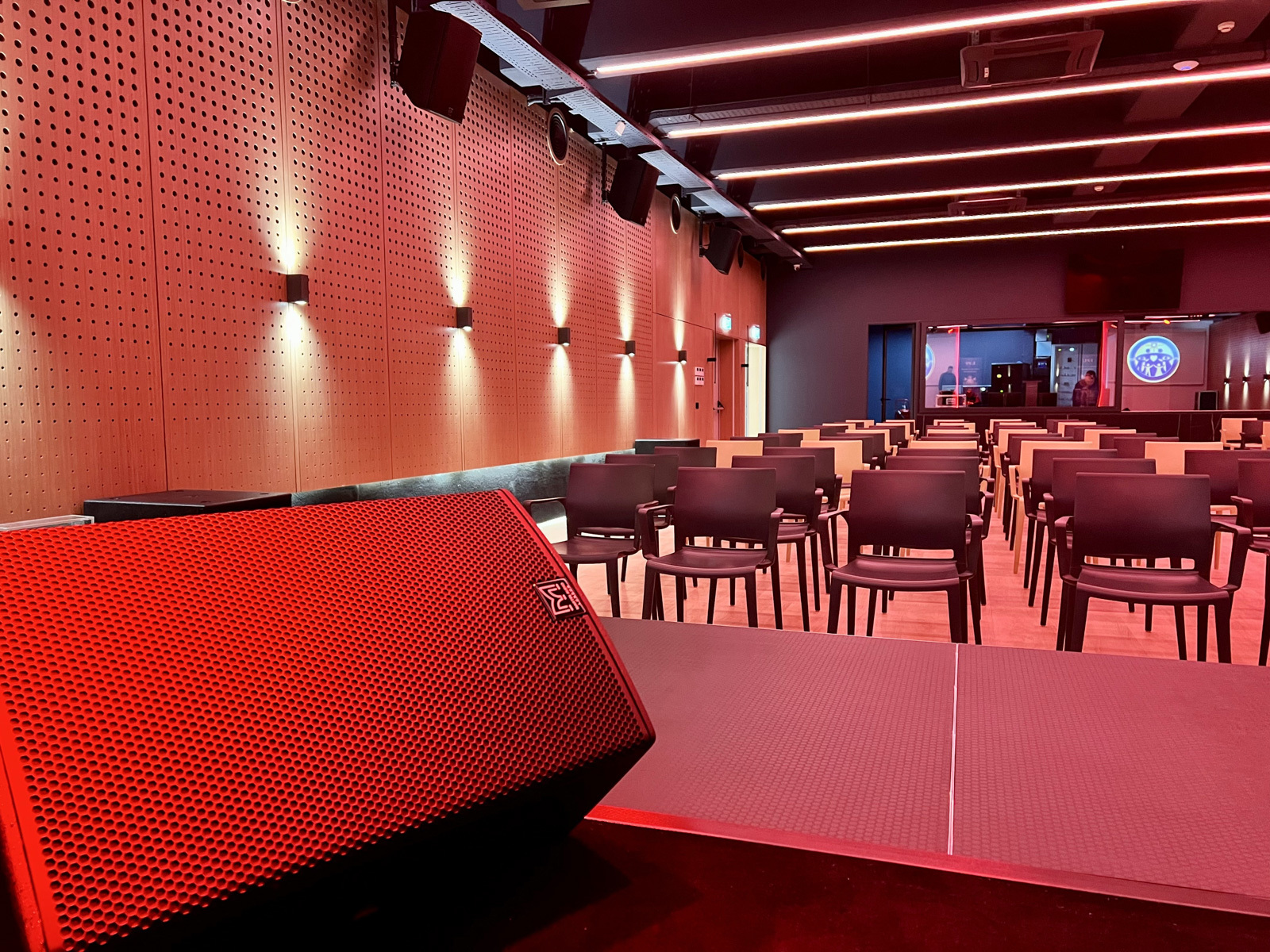 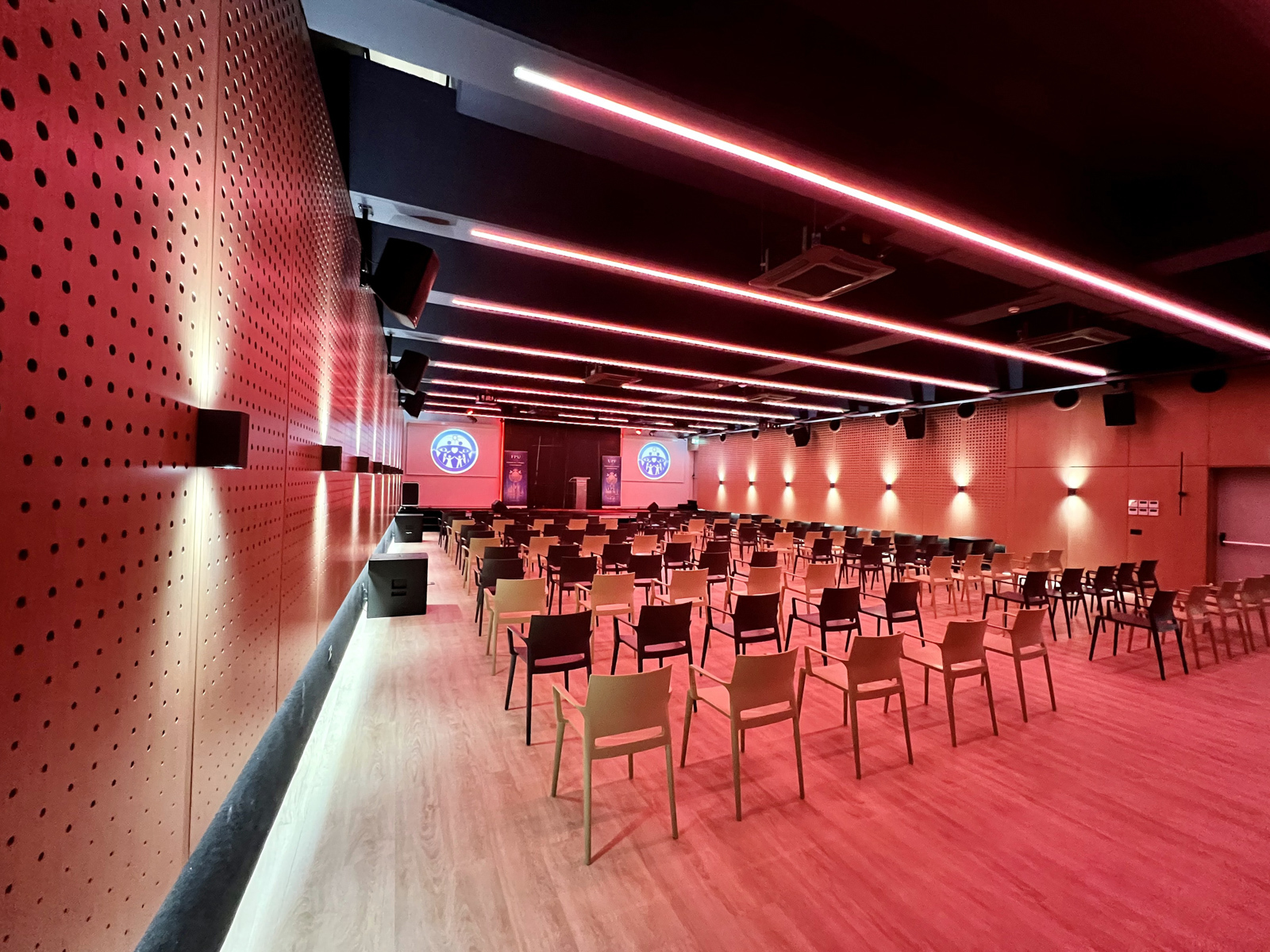 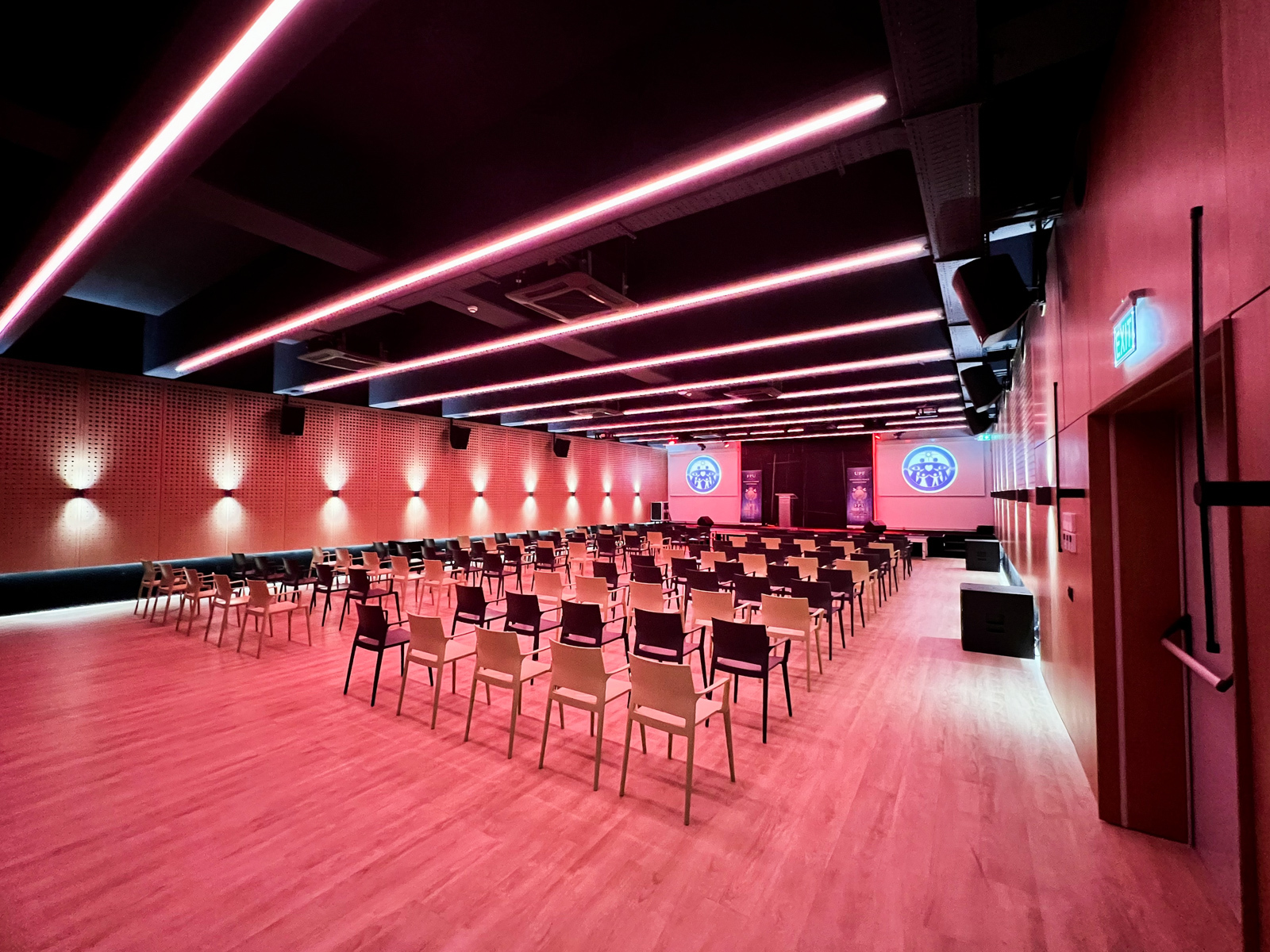 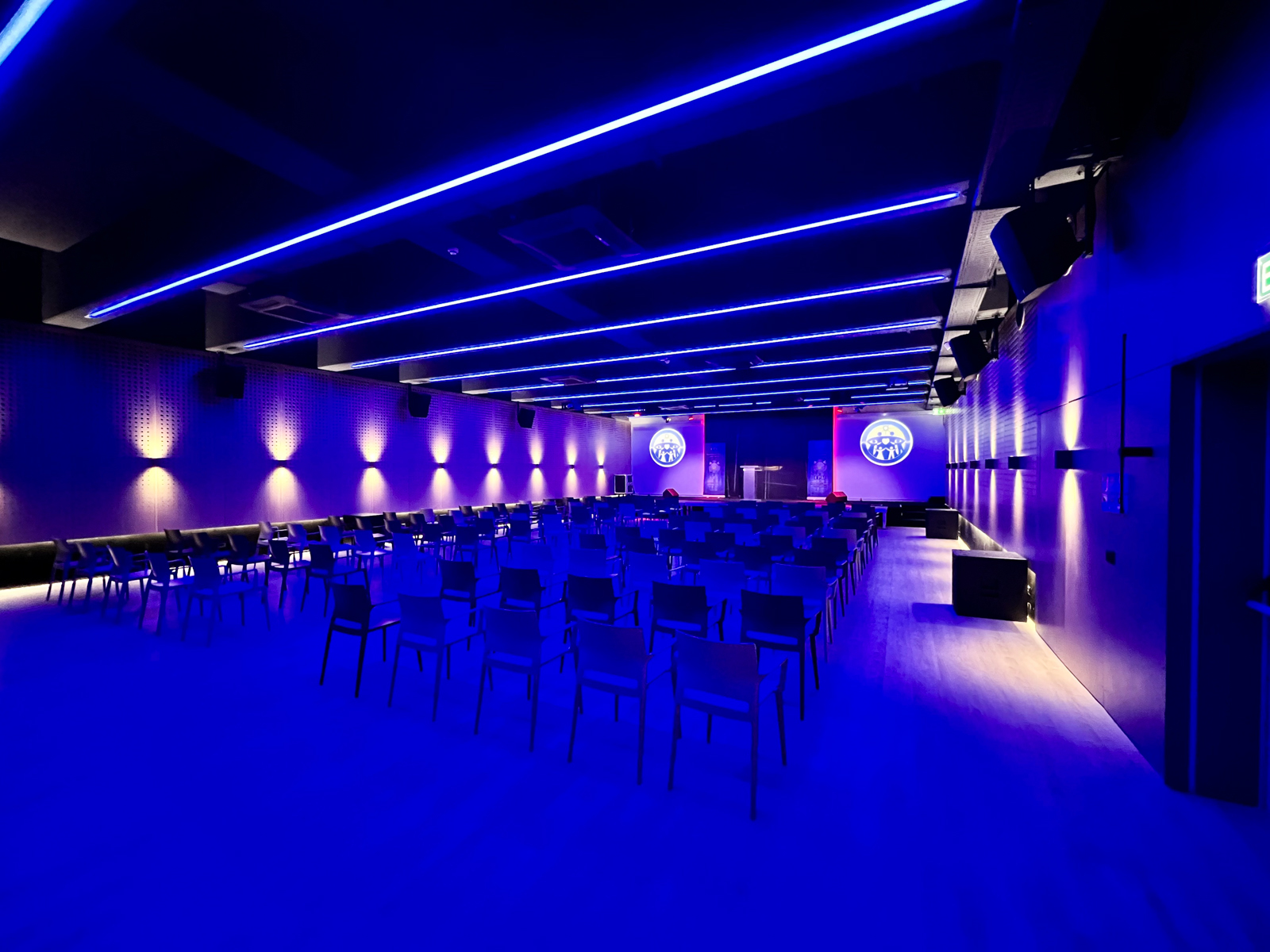 A high-quality Martin Audio CDD / BlacklineX combination has been designated for sound reinforcement in the multipurpose auditorium at the new Ambasada e Paqes per Ballkanin (Embassy of Peace for the Balkans), in the Albanian capital of Tirana.

Located near the Tirana National Park, the building serves as the new headquarters for the Family Federation for World Peace and Unification and the Women Federation for World Peace in Albania. The location was designated after Tirana hosted the Southeast European Peace Summit in November 2019, organised under the patronage of the Prime Minister of Albania, in conjunction with Family Federation and Universal Peace Federation, where over 400 VIPs from 55 countries participated.

Conceived as a ‘House of Peace’, designed to serve the Balkans, this new building has undergone a sculptural process of cuts and clefts to give it a contemporary and dynamic appearance. These features include a large panoramic roof terrace, as well as an impressive main entrance to the building. Other distinctive features allow for the entry of natural light into the underground floor, which is used for offices and conference rooms.

With a capacity of up to 250 people, the main auditorium—featuring the Martin Audio sound reinforcement—is geared up for a wide variety of events, from high-level conferences, banquets, shows, concerts, live music performances, broadcasting events and others.

CDD12 proved to be the optimal choice for the main venue

As a well-known audio-visual service provider, Prosound was one of the companies invited to tender. Their technical director, Endrit Veleshnja, who was responsible for the design, believes the success of their bid was predicated on being able to offer a high-profile brand such as Martin Audio, and duly opted for a CDD / BlacklineX combination, as he has on many occasions in the past.

Commenting on the design rationale, Veleshnja explained, “Since the multifunctional main venue is to be used for different events, the sound reinforcement system needed to be capable of catering not only for conferences and meetings but also to deliver sufficient SPL for other events, such as live bands.

“CDD12 proved to be the optimal choice for the main venue where eight of these enclosures, combined with four Blackline X118 subwoofers, perfectly fit the requirements.”

In terms of the speaker design and signal flow, six CDD12s were flown from the ceiling on custom brackets (three per side) with the final pair installed directly above the front of the stage, left and right.

On the stage itself, two Martin Audio XP12 provide reference monitoring and the received audio signals are either managed by a stage box or directly from the control room mixer. The signal is then sent to the amplifiers via Martin Audio’s dedicated DX0.5 system controller.

Other than the sound system for the main venue, Prosound also provided the stage lighting, video projection, a conference system with tabletop microphones and different mics and accessories as required for the different events. Video feeds and sound from the main venue, also need to be routed and reinforced in nine smaller meeting rooms, including three general areas.

Summing up the installation, Kliton Gjika Ceo of Prosound said that all objectives had been satisfactorily achieved. “Because this was a new building, we faced no major restrictions other than that we were unable to install the speakers along the walls.” This was in view of the special wooden panelling, that doubles both as acoustic sound treatment and as a decorative aesthetic.”

The Embassy of Peace for the Balkans will now serve as a meeting point for peace leaders and a place where activities and events promoting these universal principles can be staged.