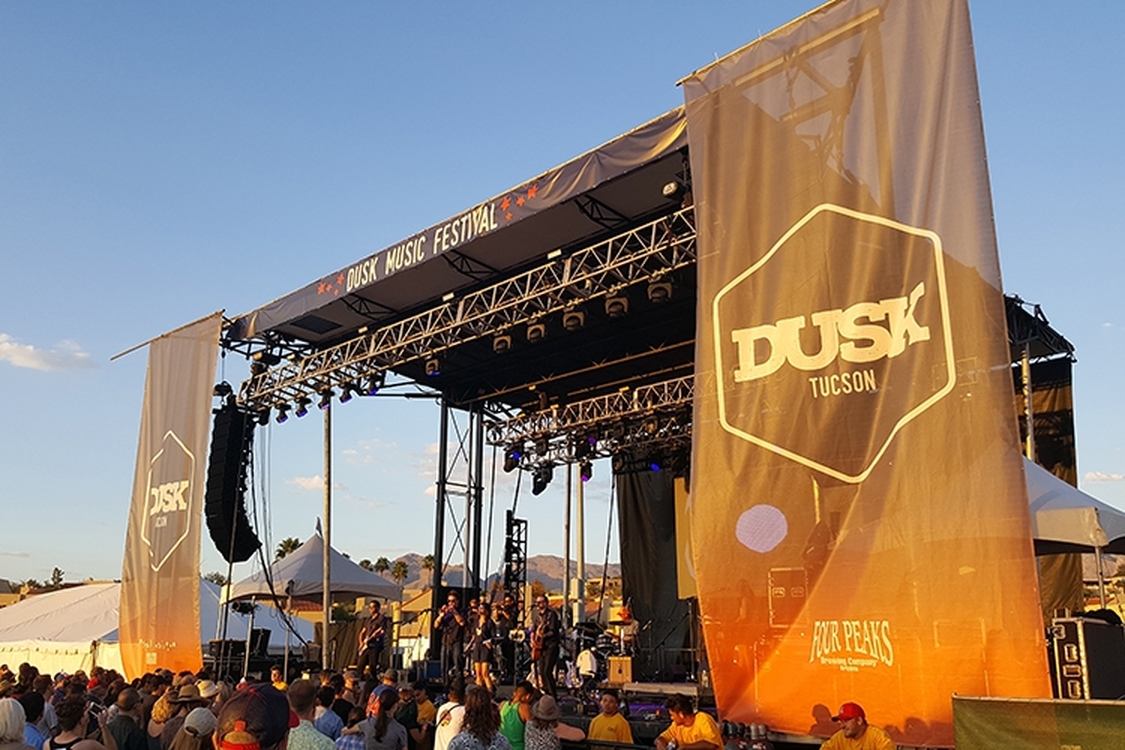 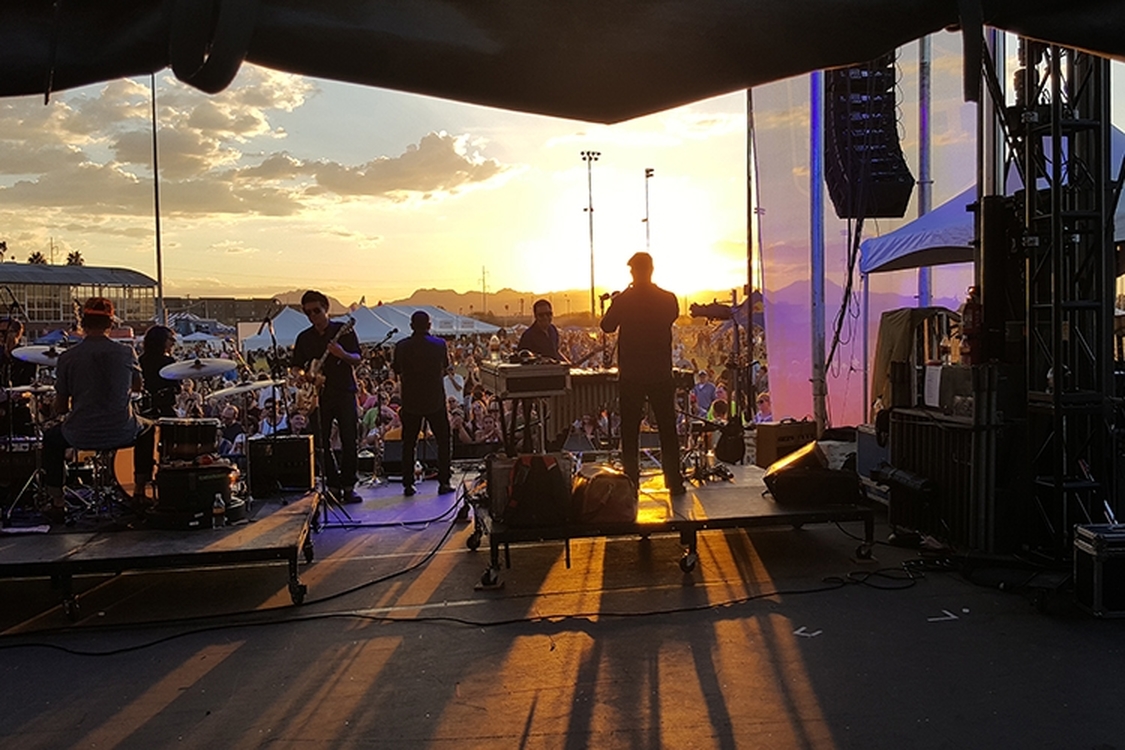 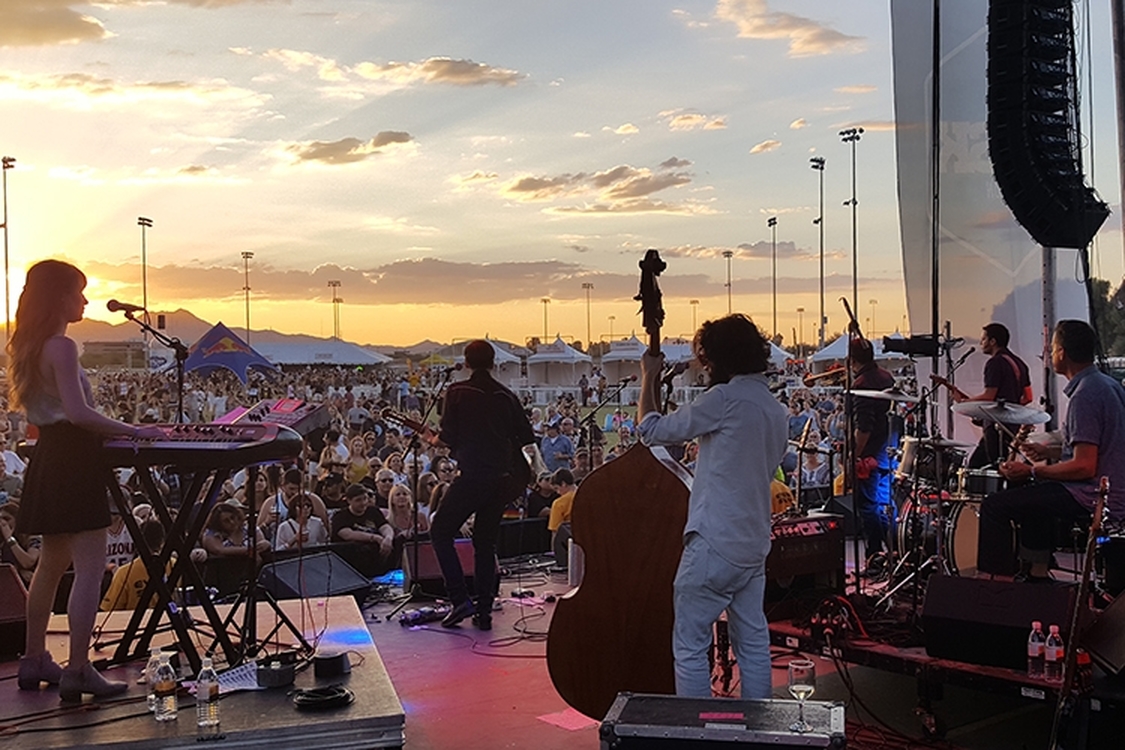 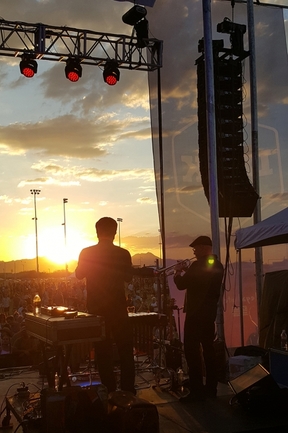 The first of its kind, the festival was held at the Rillito Downs Park racetrack at the base of the Catalina Mountains. It featured a typically eclectic Tucson lineup of artists including local Tex-Mex, Americana, indie rock legend Calexico, 'Latin folk/soul artist' Gaby Moreno and 'cosmic pop star' Luna Aura along with Hip Hop, EDM and other hard to categorize stalwarts such as Matt and Kim, RL Grime, Danny Brown, A-Trak, DJ Mustard and Wild Belle.

In addition to the music, Dusk Music Festival provided food and drink from local restaurants and breweries along with installations from regional artists and carnival games and attractions––all in support of several Tucson charities.

Asked about the setup for the new MLA system, Soundwave FOH Engineer and System Tech Erich Schmoldt specified: 'We used 12 MLA Compact boxes a side that were suspended from a Stageline SL320 mobile stage. We also deployed eight WSX subs a side, ground-stacked in front of the stage and powered by Martin Audio 4.2 power amps and processed with Lab Gruppen Lake LM44's. We also used Martin Audio LE1200's as wedge monitors on stage and an Avid Profile console for FOH and Avid SC48 for Monitors.

Erich reports that besides the eclectic artist lineup, another principal challenge involved 'a slew of apartments and businesses that run next to the park so we needed to minimize offsite noise spill, which is one of MLA's main assets. The fact that we could keep the noise away from those areas and the residential homes horseshoed behind the backstage area was awesome.

'The festival was unusual in that during the daytime shows that featured artists like Luna Aura, Gaby Moreno, Wild Belle and Calexico, there were mostly older folks and families with kids in the crowd. Later on in the evening, the music became mostly Hip Hop and EDM with a younger crowd, and that's where we had to monitor potential sound issues more closely because of the higher output and heavily processed sound. MLA was a lifesaver during those sets.

'The noise rejection in the no go zones, especially on and behind the stage, was the key to the MLA rig. In terms of crowd coverage, the sound went about 300 ft. out until the area for the charity vendors where we had 'hard cut' which we could do easily with the system. We also made adjustments for different times during the day. When it was EDM later at night, people were up closer so we started cutting it off closer to the stage because we had that kind of control.'

In terms of the MLA's sound quality, Erich says that 'the clarity was wonderful and sonically I was really impressed, especially when you start walking out of those cutoff zones and you can tell the system is really doing its job. You keep walking and the high end slowly goes away and eventually it sounds really distant. Then you can turn around and walk right back into it. It's really impressive. And the low-end response is exceptional––it seems to go down nice and low and still be very usable in the 80-60Hz range unlike other systems that can sound muddy.

'The artists really appreciated MLA and Calexico's engineer Bruce Momich, who's also Production Manager and FOH at the Rialto Theater here in town, liked it a lot. He was able to bring up a scene from a previous show on the Profile and only had to flatten his house graph, bring up the channels with his own personal EQ touches and he was ready to go. The line check went smoothly and he really enjoyed the whole experience.

And the promoters were really stoked about the sound,' Erich concludes, 'especially when they realized that MLA was so effective at handling the noise issues. The festival will probably happen again next year with bigger artists given the level of success they experienced this time around.'