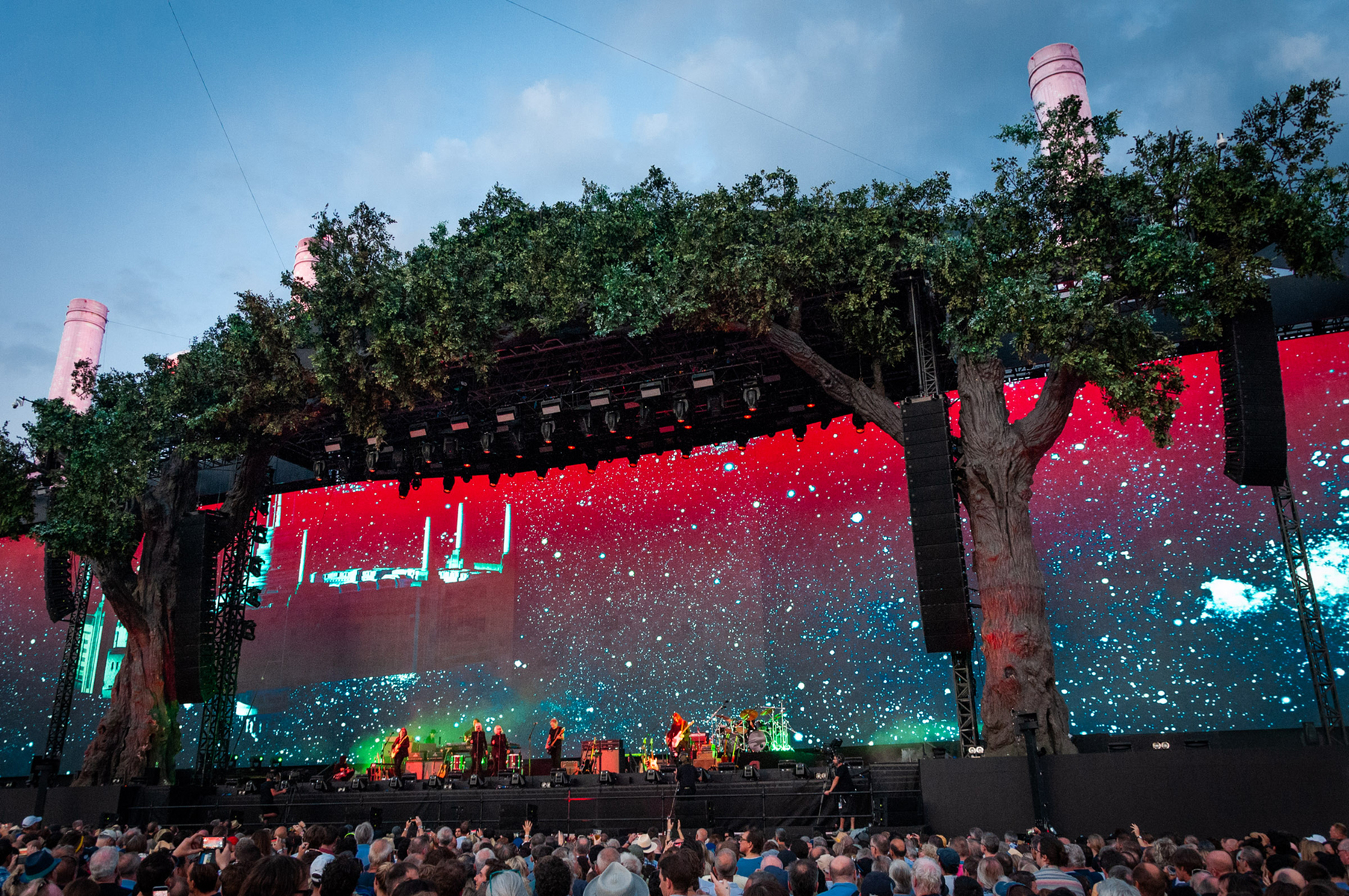 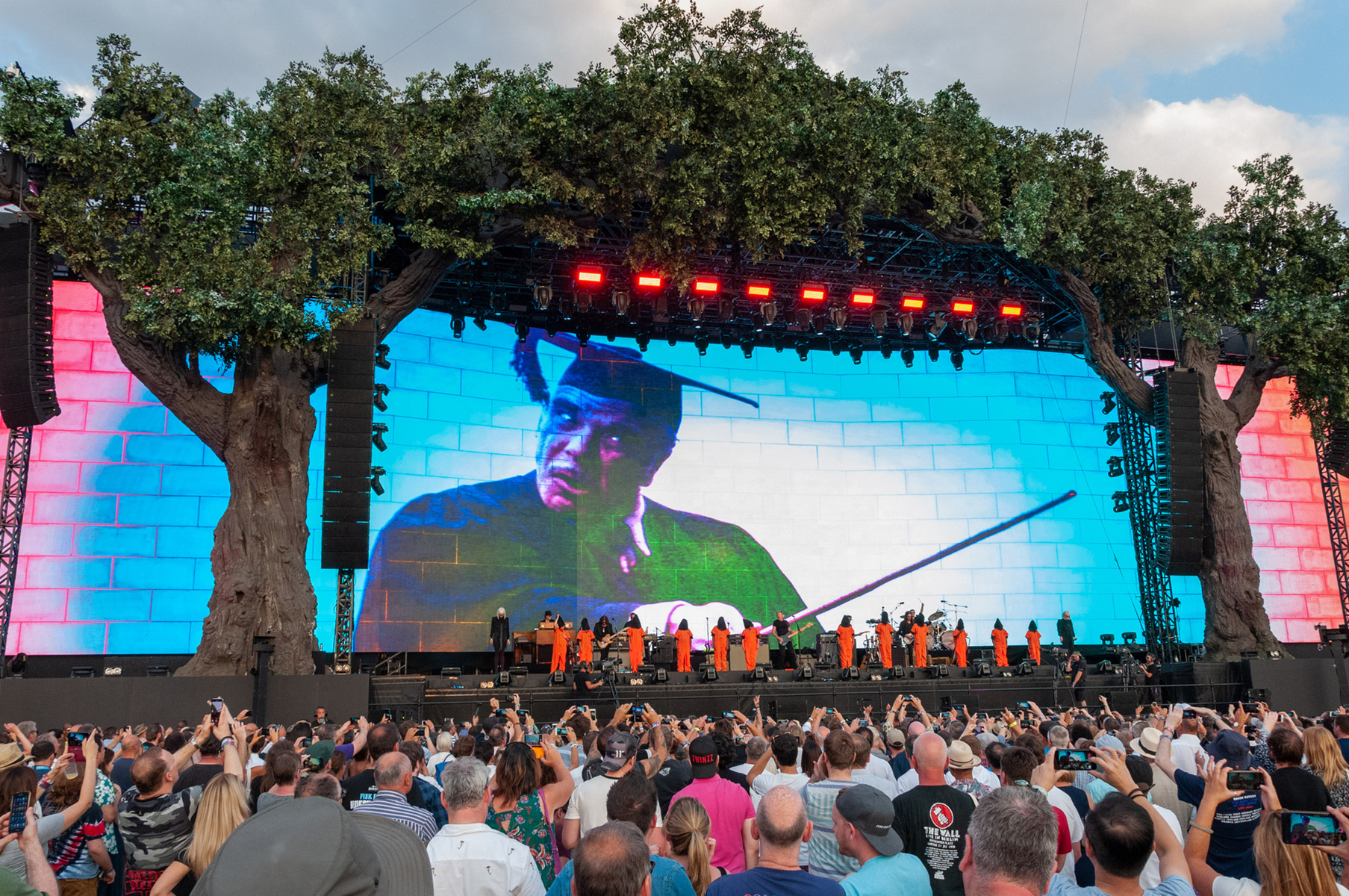 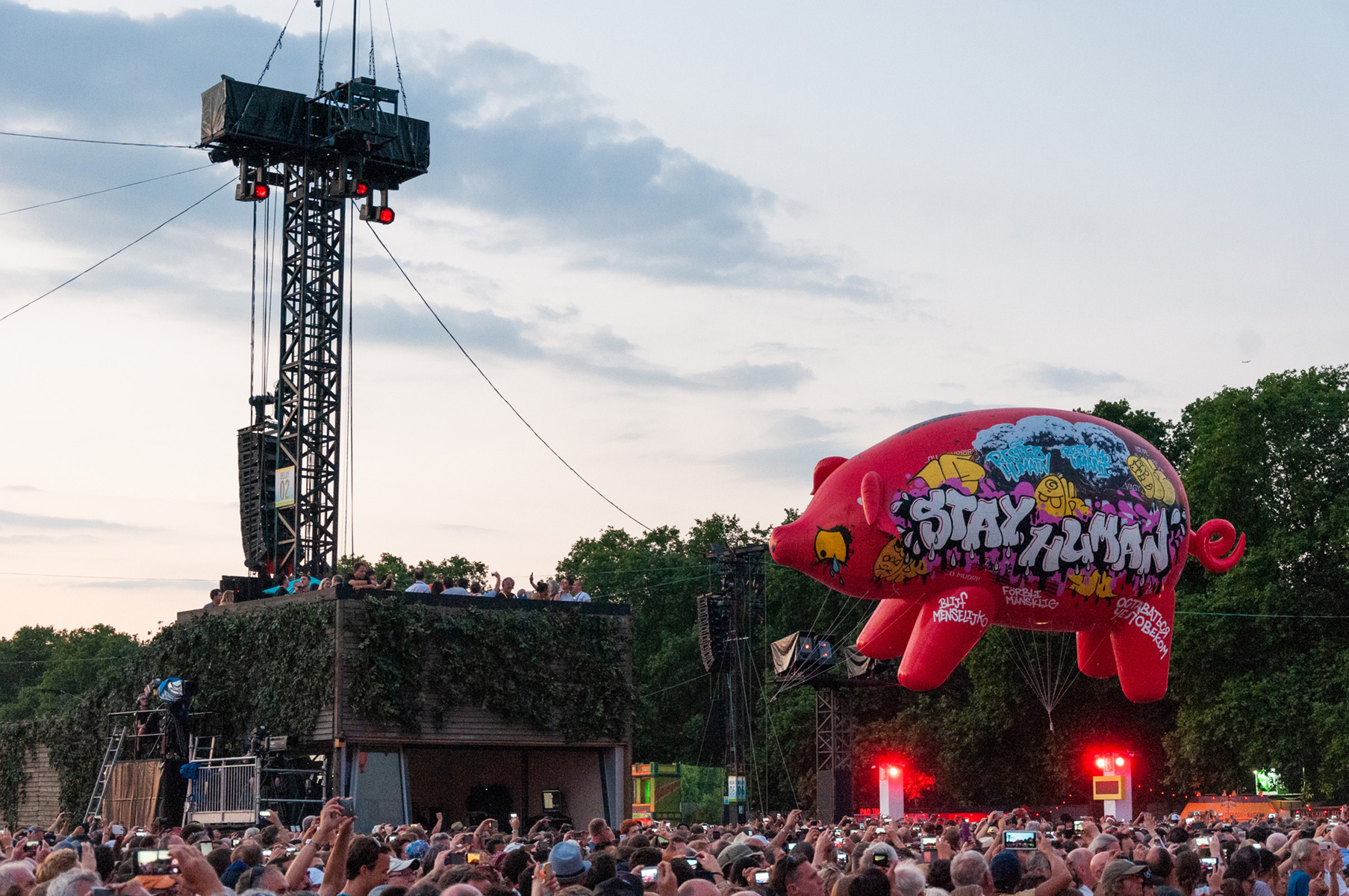 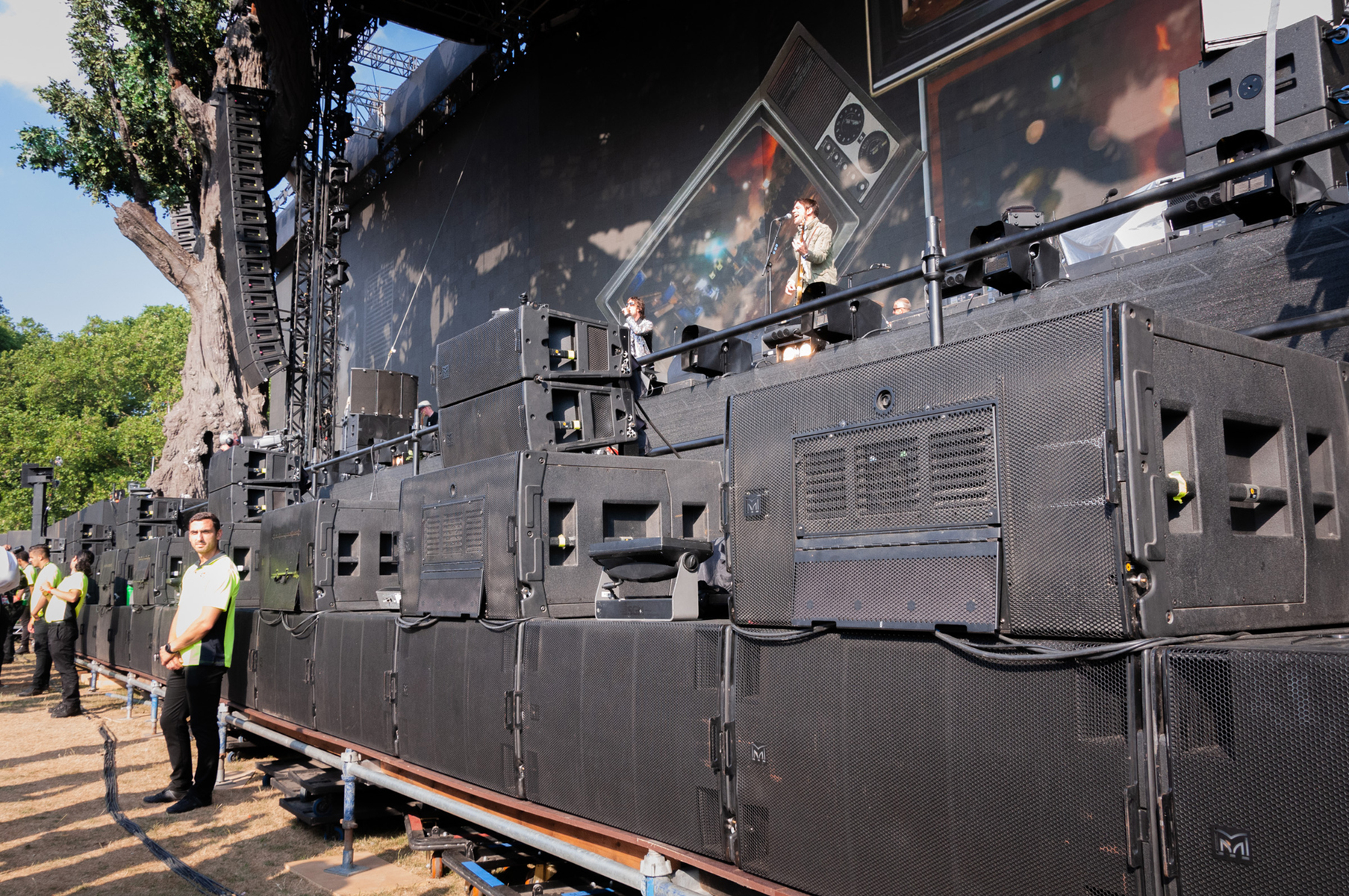 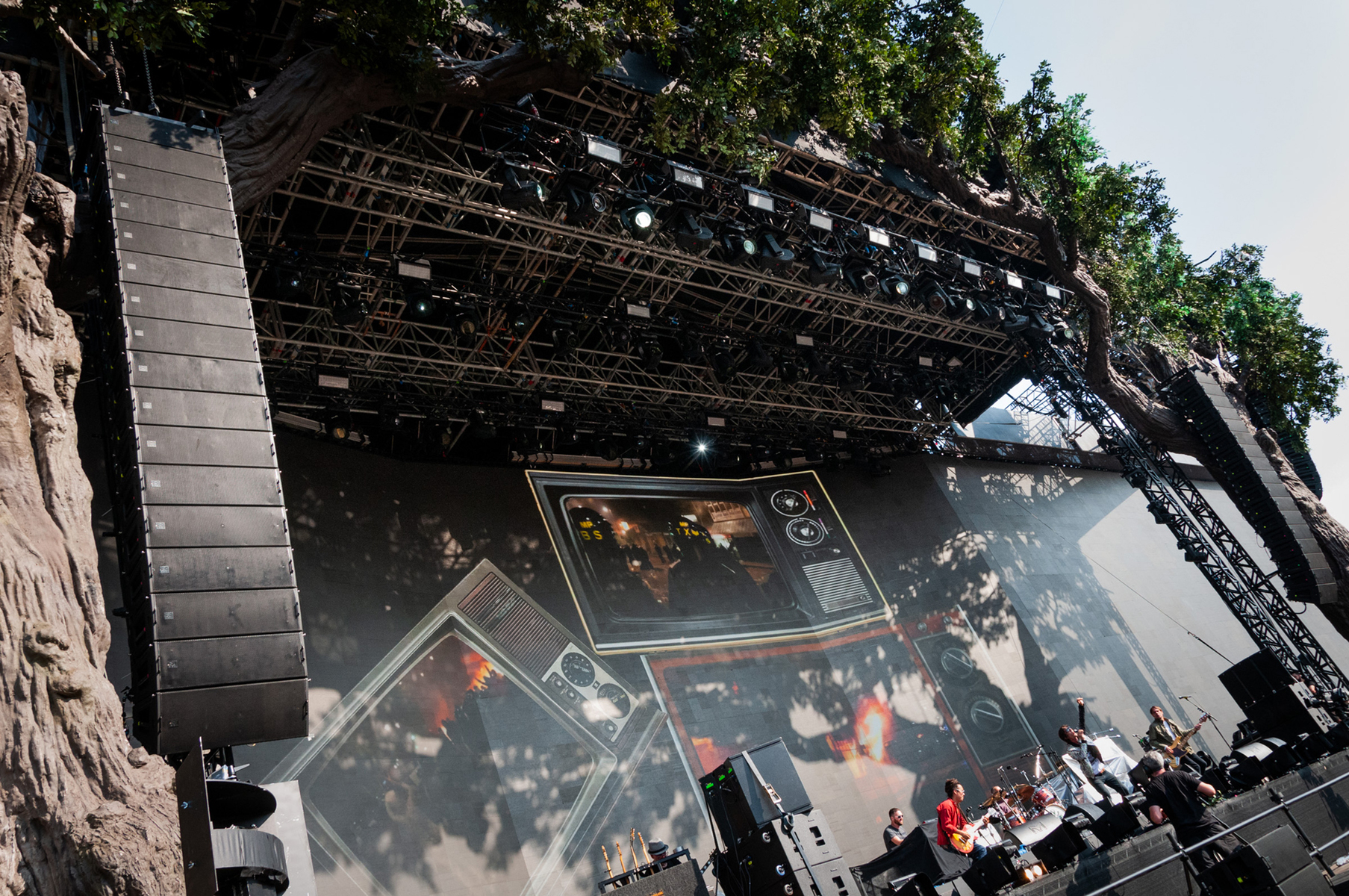 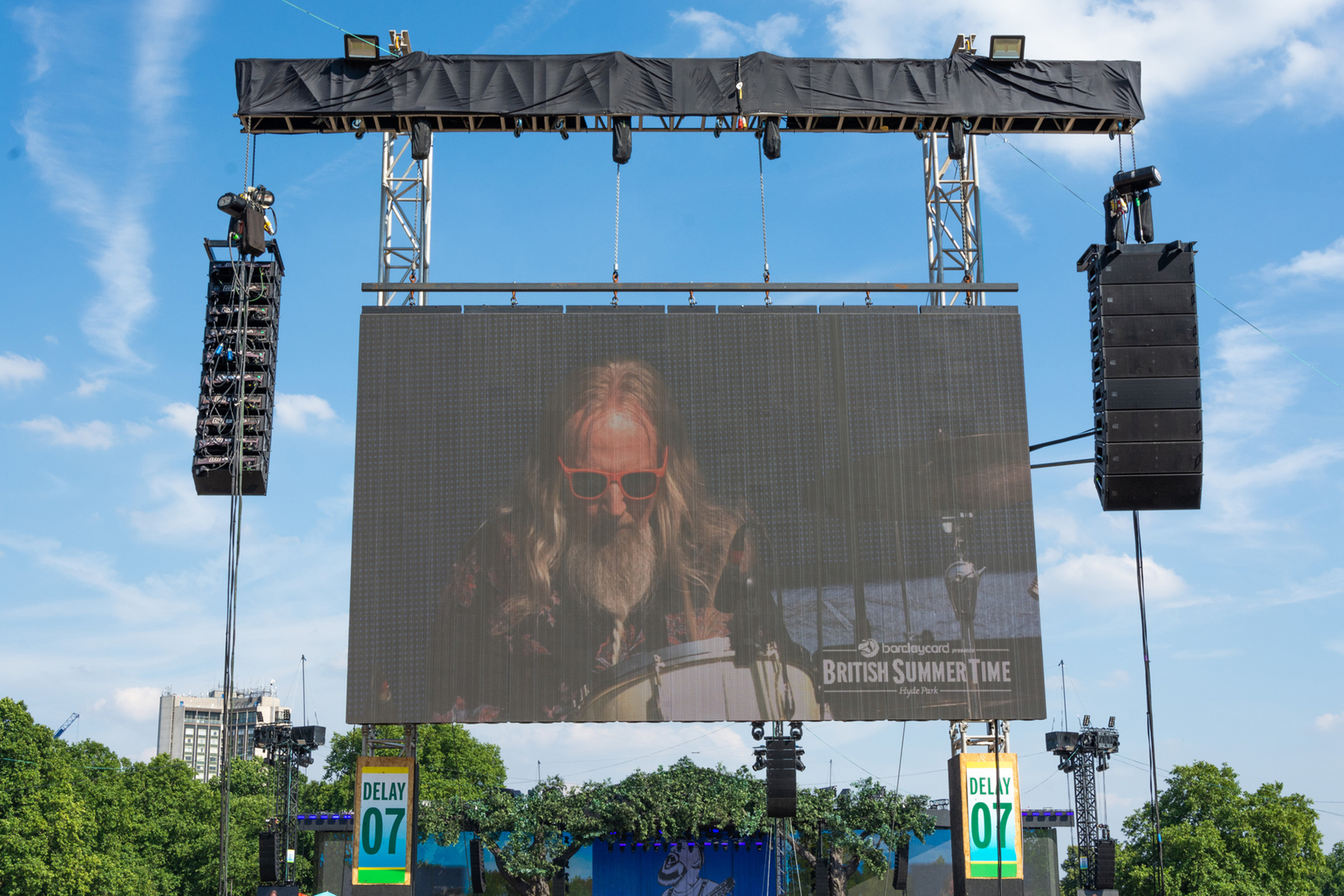 MARTIN AUDIO ON A HIGH IN HYDE PARK

Maintaining the status quo, Capital have rigged the main stage and outfield identically to 12 months ago, with one major exception.

Providing the spectacular curtain raiser to the 10-day festival, Roger Waters brought his Us + Them tour to the UK for the first time. Waters had already taken his sonic and visual experimentation to breath-taking levels at Desert Trip in 2016, with the biggest surround sound system ever built. To create maximum impact at Hyde Park Capital were asked to provide an additional 12 hangs of MLA/MLA Compact on towers positioned through the concourse for one night only.

These provided 12-point surround sound effects, at positions set by Loud Sound’s Dan Craig and fine tuned by Roger Waters’ sound team, as part of the show to give the audience an immersive experience that had them gripped from the beginning as the sound chased around the site.

The auxiliary towers added a further 112 MLA/MLA Compact cabinets to the existing total of 206 MLA series cabinets deployed in the Park. With 318 enclosures in total, this was the largest deployment of MLA at a festival anywhere in the world, eclipsing that of Rock in Rio and Glastonbury.

The same weekend Capital Sound were also servicing the Volt/Balaton festivals in Hungary, followed by Kew the Music, which added a further 149 MLA family enclosures in use at the same time.

Back at Hyde Park, for the remainder of BST, the main Great Oak Stage is equipped with two hangs of 16 x MLA and 1 x MLD Downfill per side, with 13 x MLA and an MLD Downfill for the sidehangs. The sub array consisted of 32 x MLX in a broadside cardioid design (21 front facing, 11 rear facing).

With 12 MLA Compact serving as front fills all MLA components are operating on the same network.

we were able to meet all sound level challenges, and the reviews of the sound system in the serious media the following day were 100% positive

Out in the field, there are nine main delay towers, seven comprising 7 x MLA and a single MLD Downfill, while for delay positions 10 and 11 eight MLA Compacts are deployed. Four of the positions are supported by 12 MLX subs.

All of which provided a mesmerising soundscape for Roger Waters as he worked through an epic 21 track performance spanning many Pink Floyd albums, with classics such as Breathe, Us & Them, Time and Wish You Were Here—as well as several tracks from his solo album Is This The Life We Really Want.

A very clear political voice drummed throughout, seen during the performance of Another Brick In The Wall Part 2, with school children from the Grenfell community taking to the stage dressed in Guantanamo Bay prisoner boiler suits, with t-shirts bearing the one word—‘RESIST’.

This theme continued following the interlude. With Waters’ grandiose visuals projected on screens out from the stage, a series of images and quotes from President Donald Trump flashed across screen. Also appearing was an inflatable pig parading through the crowd, Battersea Power Station chimneys extending above the stage, and even a Dark Side Of The Moon prism created from lasers.

The show ended with a stupendous rendition of The Wall classic Comfortably Numb and a firework display.

The anticipation for Waters was fuelled by vintage performances by Richard Ashcroft and Seasick Steve, which took place beforehand on the Great Oak Stage.

Away from the Great Oak Stage, Capital equipped the VIP Pavilion this year with 12 x Martin Audio Blackline F8+.

On the Barclaycard Stage (Stage 2), 8 x MLA Compacts are flown on each side of the stage, along with 14 of the new Martin SX218 subs, while the popular Martin Audio DD12’s provide front fills.

The Moretti Bar, which runs through the midweek from Monday-Thursday, features a full Martin Audio system comprising a pair each of DD12 and CSX-LIVE 118 subs for the live stage with 4 x Blackline F12 stage monitors, while the bar area features a distributed system of DD12, DD6 and PSX subs.

Summing up the opening event, Timmins said, “This is up there in my top five shows of all time. We’ve never built a surround sound system on that scale, and we were not only firing low-level FX but high level sources around the site, which needed to be contained. But with everyone working to a common goal — we were able to meet all sound level challenges, and the reviews of the sound system in the serious media the following day were 100% positive.”

Martin Connolly agreed. “Roger Waters’ production team—including sound engineer Jon Lemon, system tech Dean Mizzi and Josh Lloyd, who did the set-up with our system tech Toby Donovan, achieved everything they wanted. All have sent us emails thanking us, and we are delighted with the result.”

Of the event Jon Lemon himself said, “The Capital team did a great job and worked so well with Dean and Josh, as well as Toby and the team. We pulled it off!”

Thus a site that was once thought to be unworkable because of the way punitive offsite sound thresholds had impacted on sound levels in the bowl, has now been consolidated by Capital Sound, and a combination of Martin Audio’s flagship MLA PA and its DISPLAY™ optimisation software.

Summarising the festival as a whole, Martin Connolly stated that wholesale complaints from Mayfair and Kensington residents was now a thing of the past. “No-one really raises the question of restrictive sound levels any more,” he said.