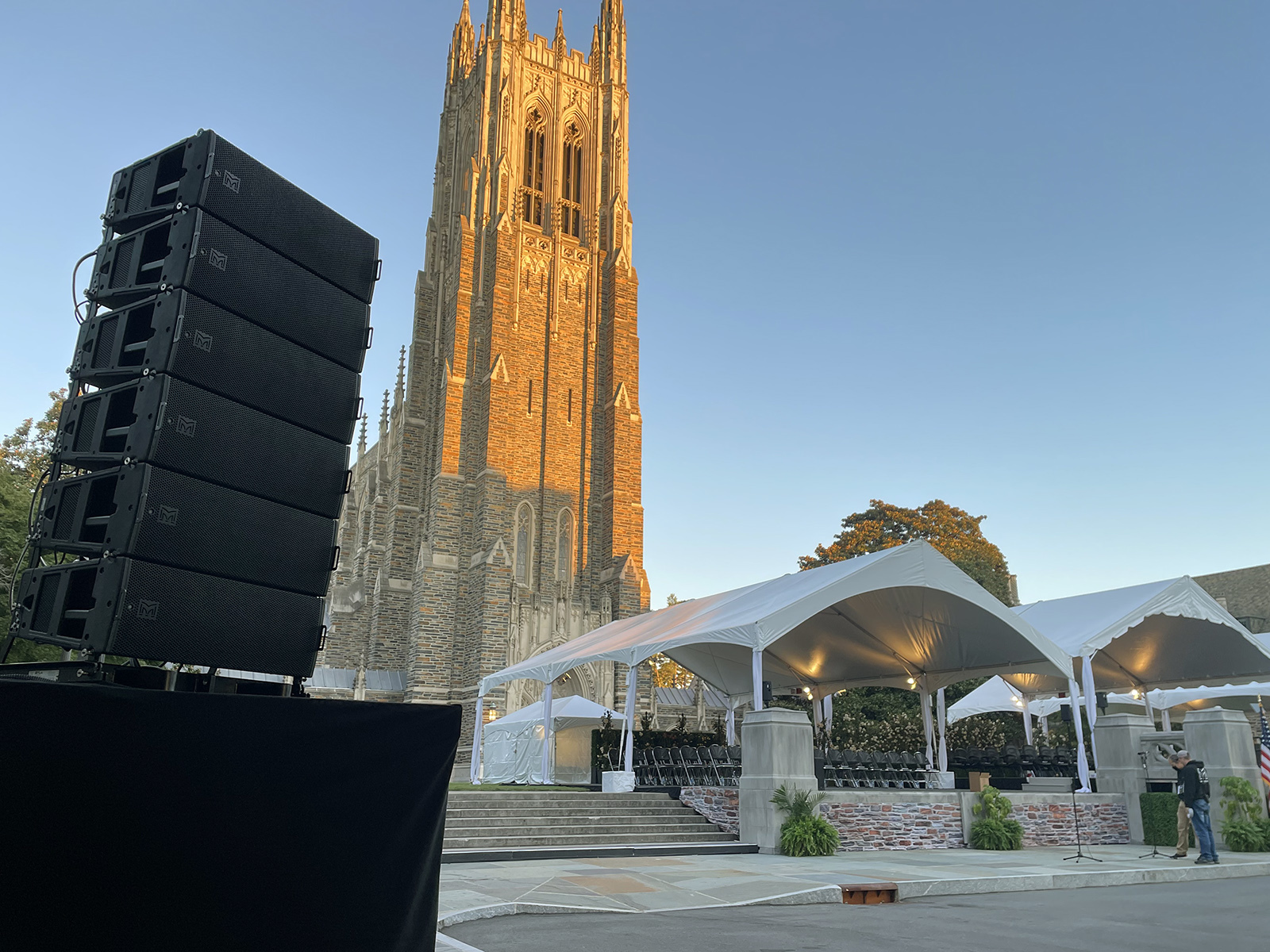 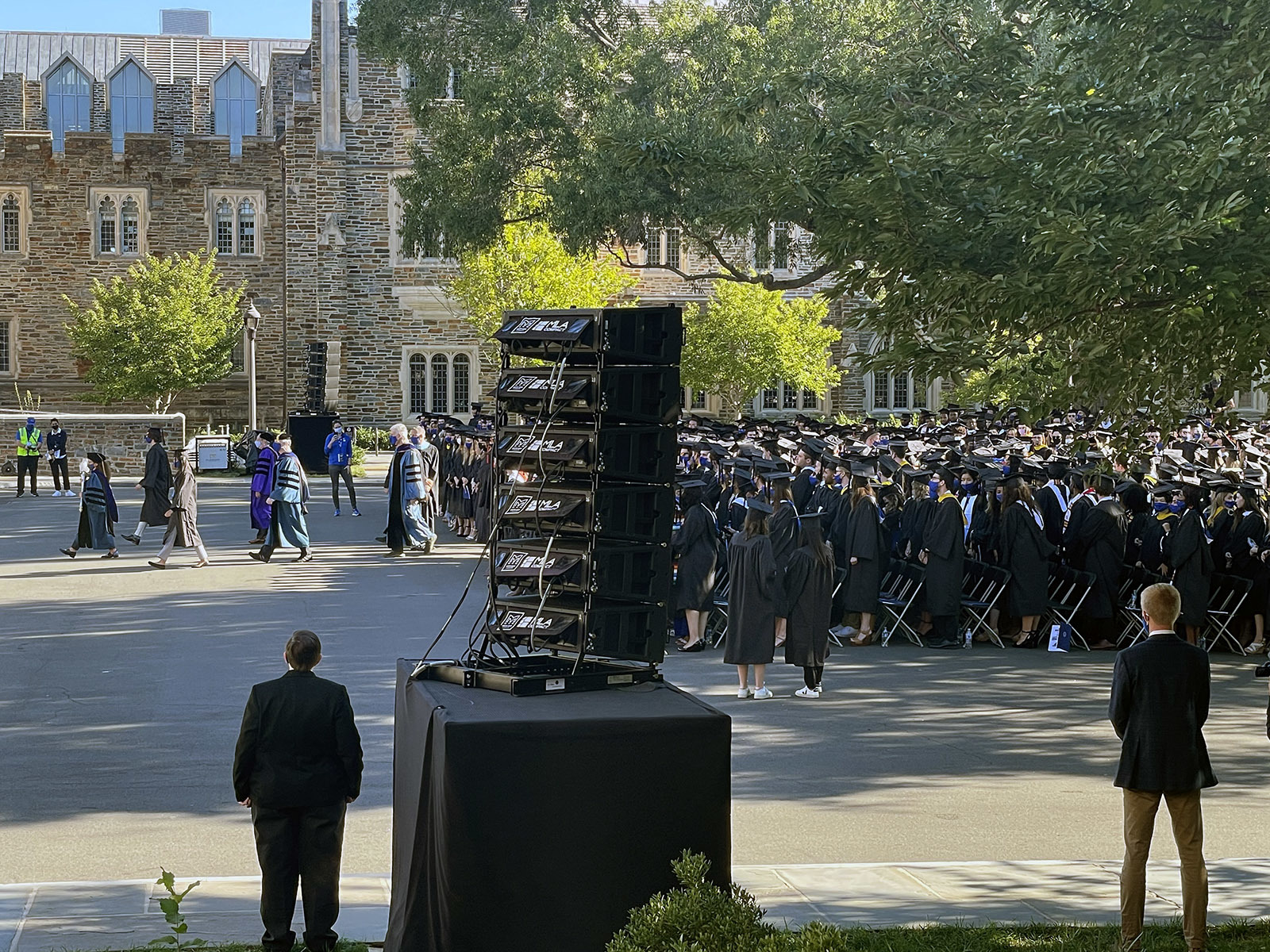 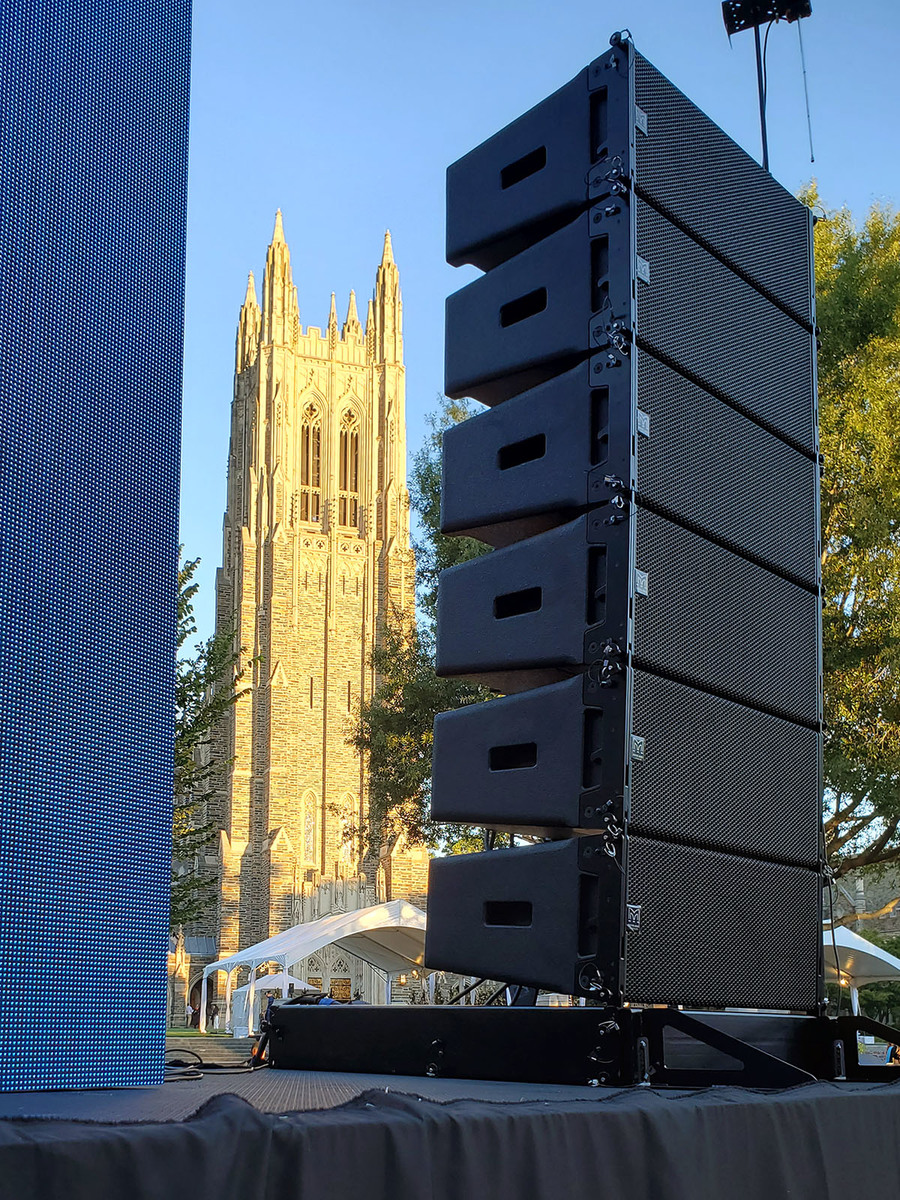 A Martin Audio MLA Compact loudspeaker array system was chosen by partners, North Carolina-based RMB Audio, when locally based Duke University’s Spring and Fall 2020 graduation was postponed until a time of greater health safety. That time was determined to be September 26, 2021—when undergraduates, graduates and professional school class members (and their families) were invited to participate in the delayed celebration.

The stage was set up with the imposing Duke Chapel—an English Gothic 210ft-tall structure in the centre of campus—as the backdrop. Student seating started downstage and extended back 300 ft. Large trees, with low branches 13 ft above the ground, occupied the corners of the audience seating, making it necessary to project sound in a slice to pass beneath the foliage to focus on the audience. “MLA Compact is capable of providing focused sound to avoid reflective surfaces and that technology was needed,” exclaims RMB Audio founder, Cooper Cannady.

Six MLA Compact cabinets were placed on decks, far off stage right and left, and separated by 170 ft. Coverage started with the first row of seating and covered a slice out to 120 ft. The delays, 100 ft from the stage, consisted of six WPS cabinets placed on decks, far left and right. These were driven by Martin Audio iK42 amplifiers in one-box resolution to provide even coverage of the remaining 200 ft of seated and standing audience.

A far shade tent was fitted with Martin Audio DD6 loudspeakers on stands. Ten of these enclosures were placed unobtrusively on stage, out of camera, for monitor foldback, while two Martin Audio DD12 were placed equally discreetly as the infills. Finally, there were two video walls to serve the additional seating, with two CDD-LIVE12 assigned to each wall.

“Martin Audio has been a superlative speaker systems manufacturer, devoted to delivering intelligible audio to large audience areas,” believes Cannady. “The speaker systems—ranging from small enclosures that easily hide from cameras during high profile events—are matched to the voicing of the larger enclosures. This continuity of sound reinforcement voicing permits ease of integration of the Martin Audio product range.”

It had therefore been seamless to integrate a wide range of Martin Audio models, including MLA Compact, WPS, DD12, DD6 and CDD-LIVE12 and DD6 for different commencement applications while maintaining the same voicing characteristics, he emphasised. “This matched voicing is a significant design parameter for audio company inventories to apply to their projects,” Cannady concluded.

Responsible for system design and optimisation was Matt Johnson, while other crew members included Wayne Sowder (streaming and archive mix) and Rick Null.