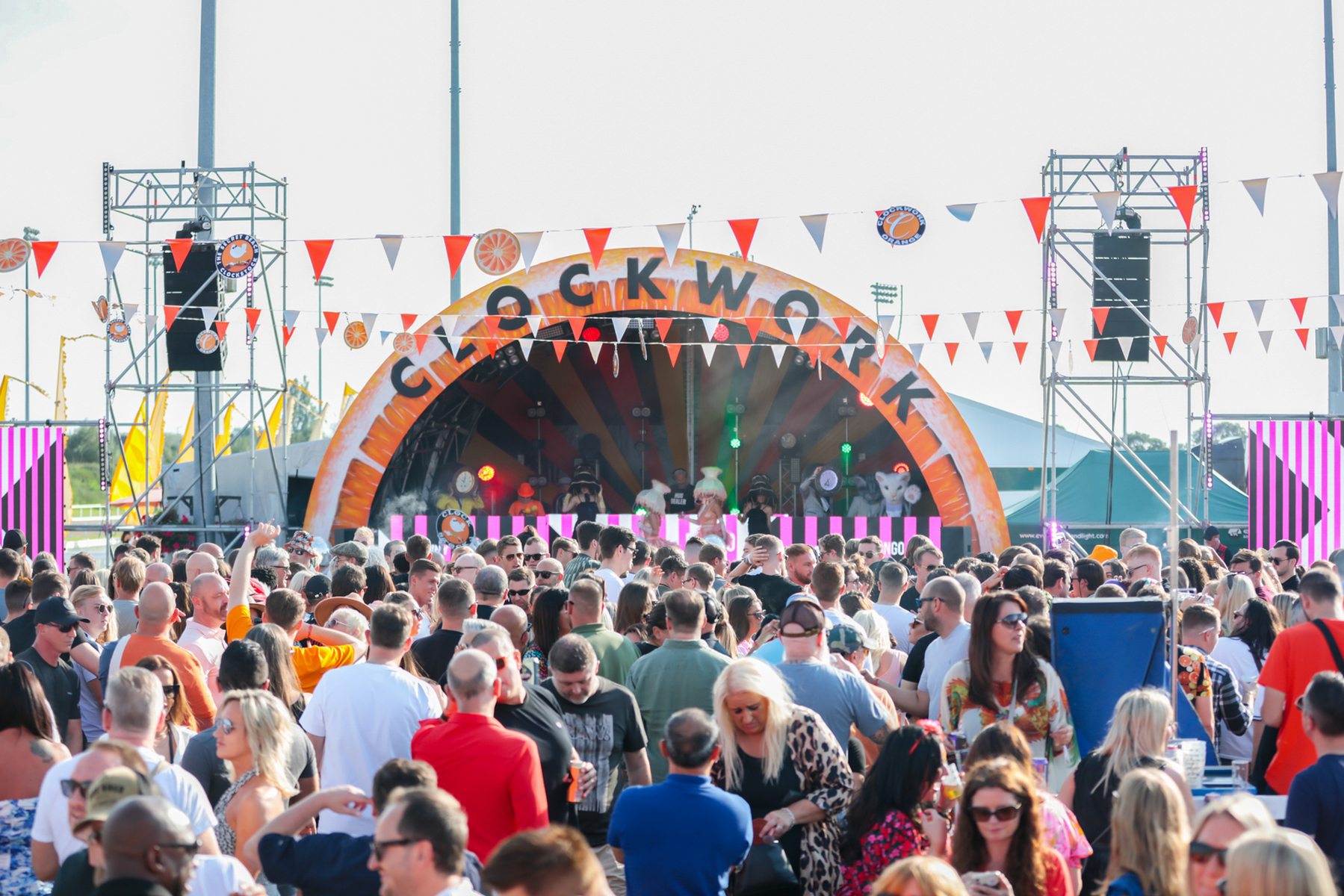 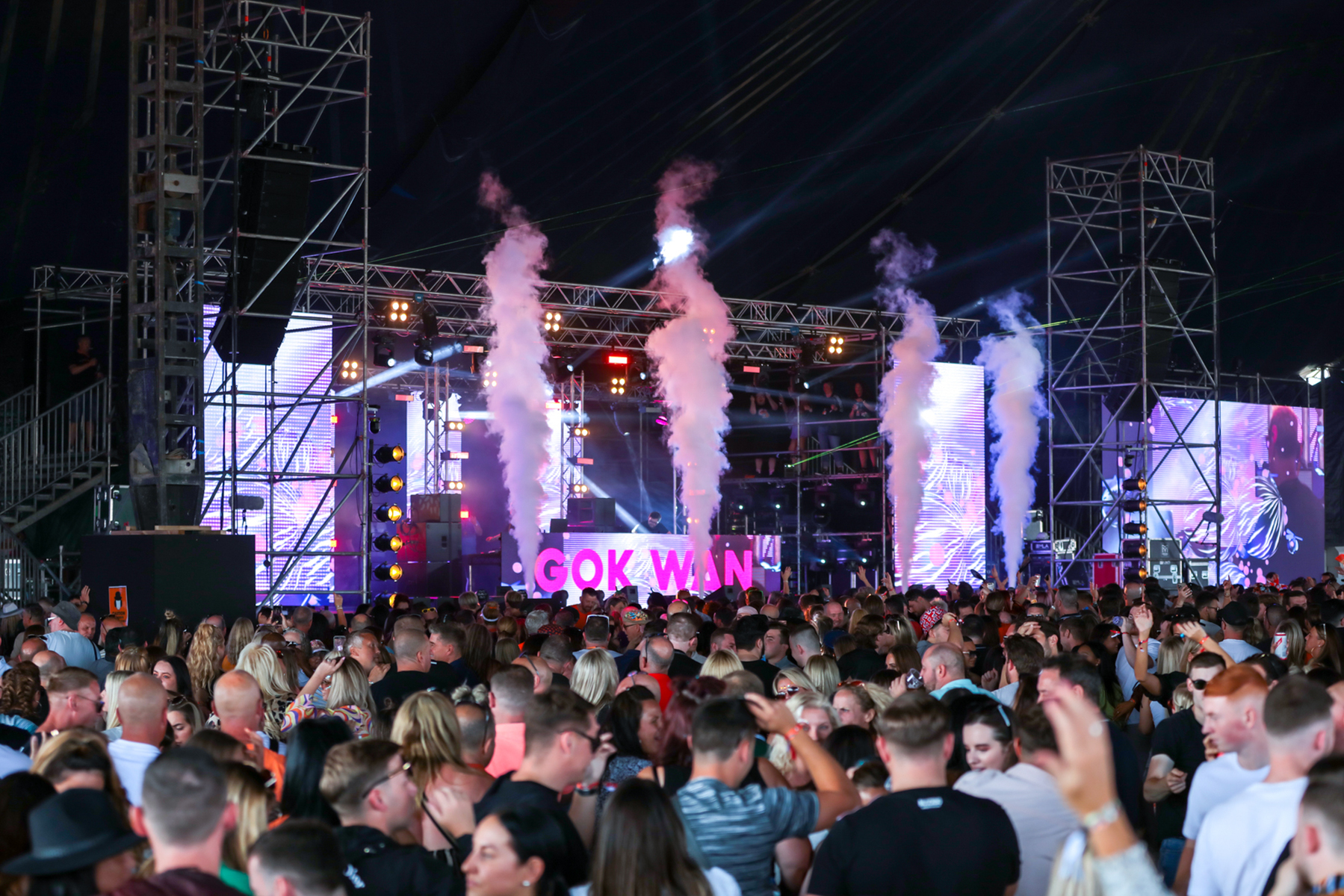 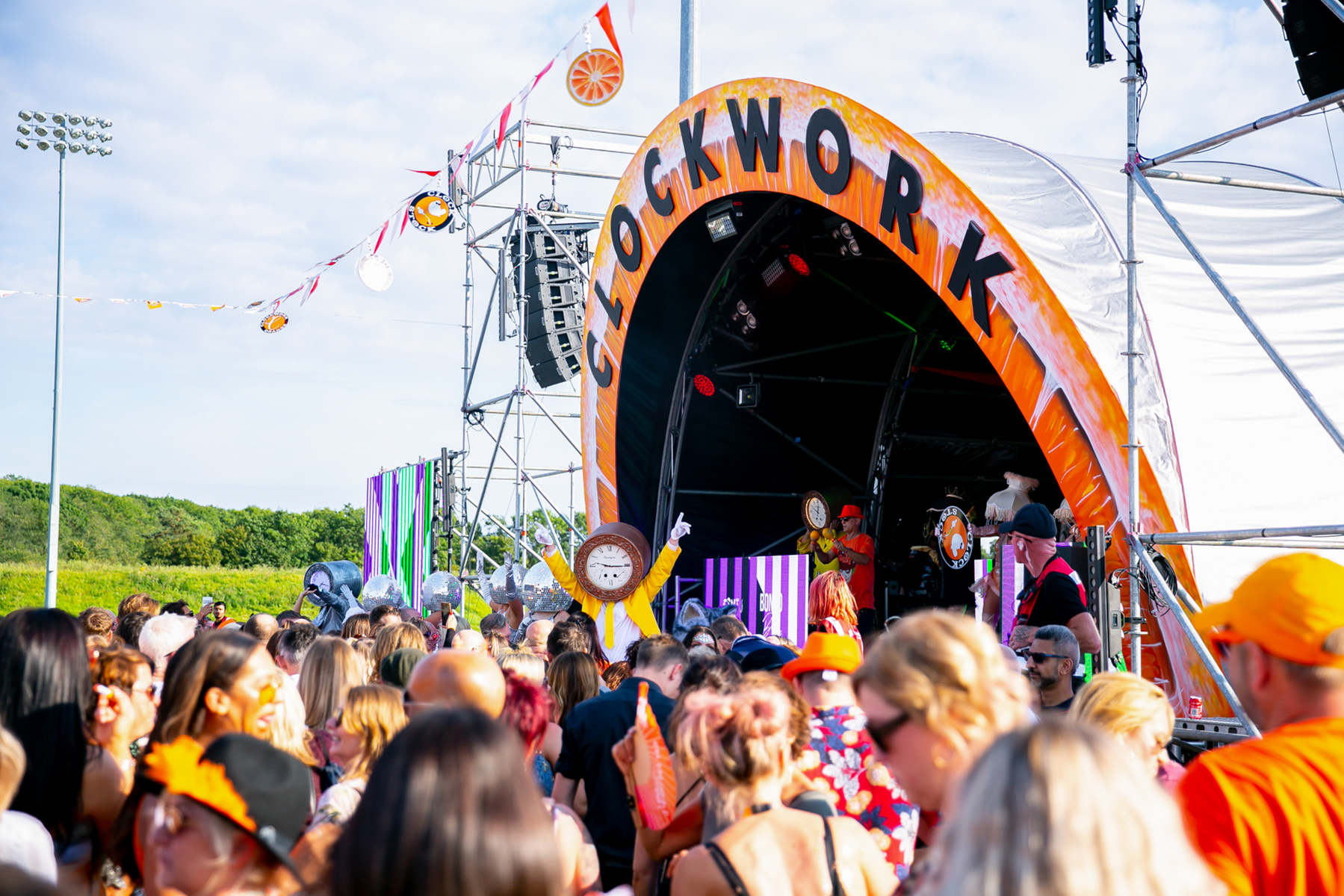 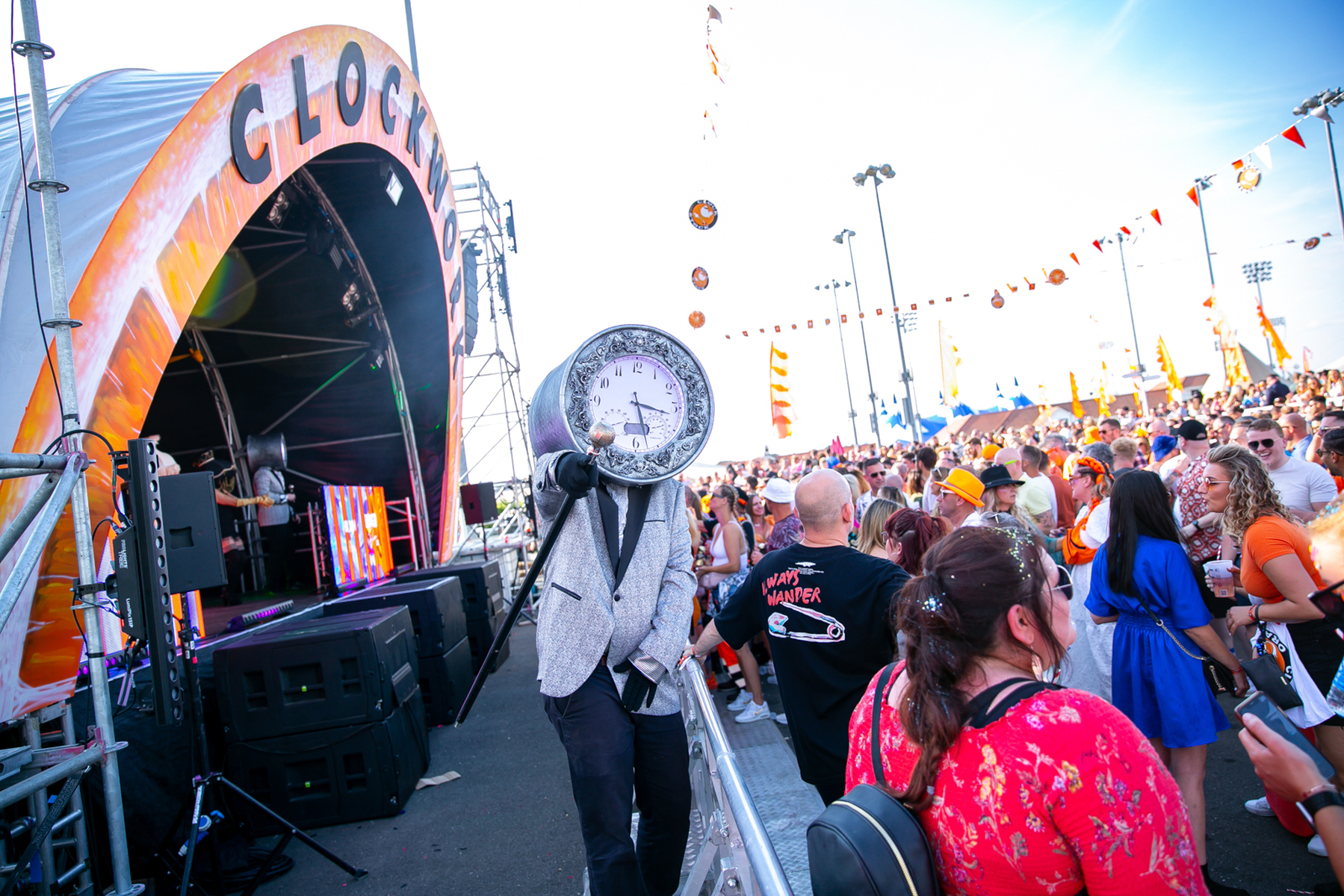 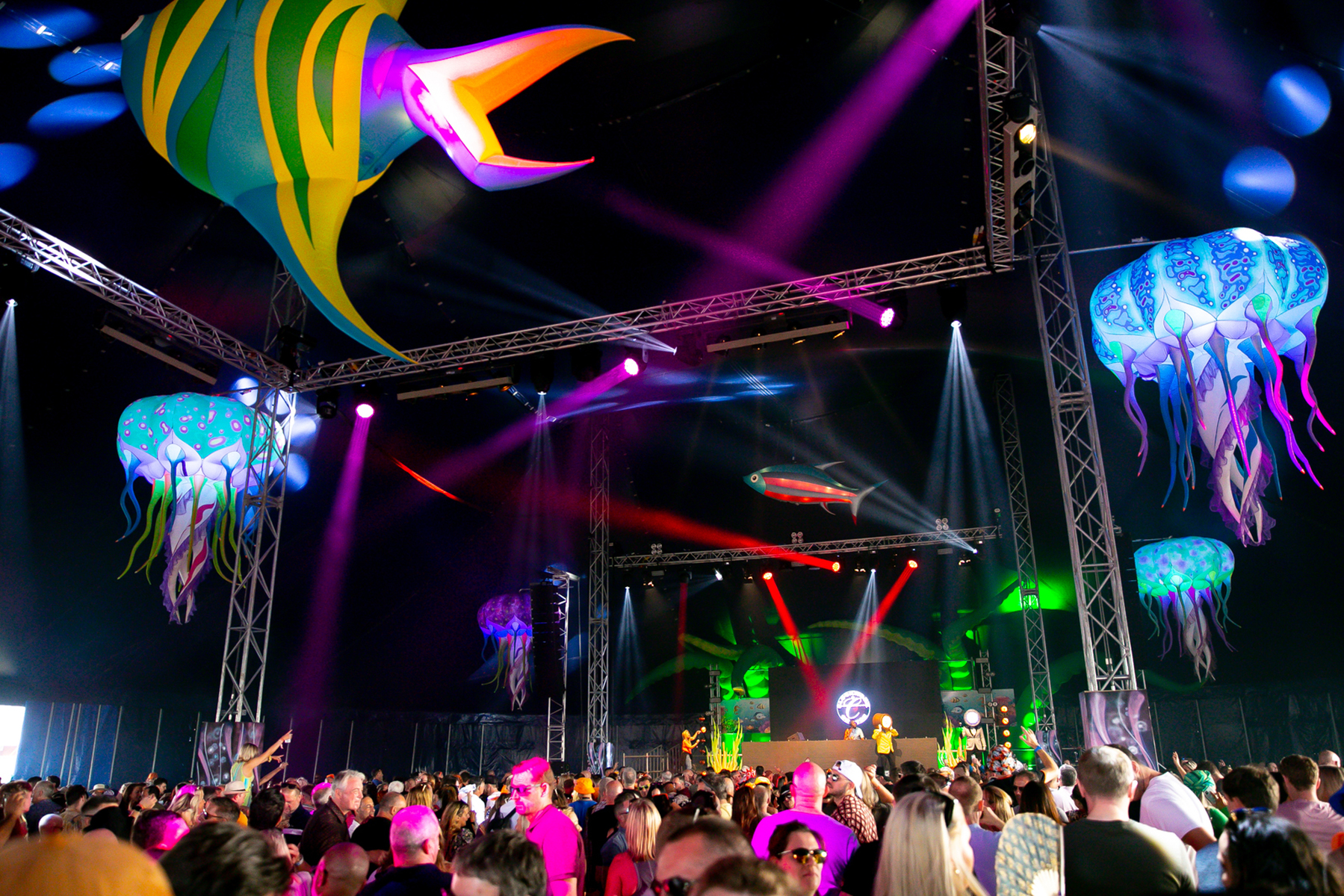 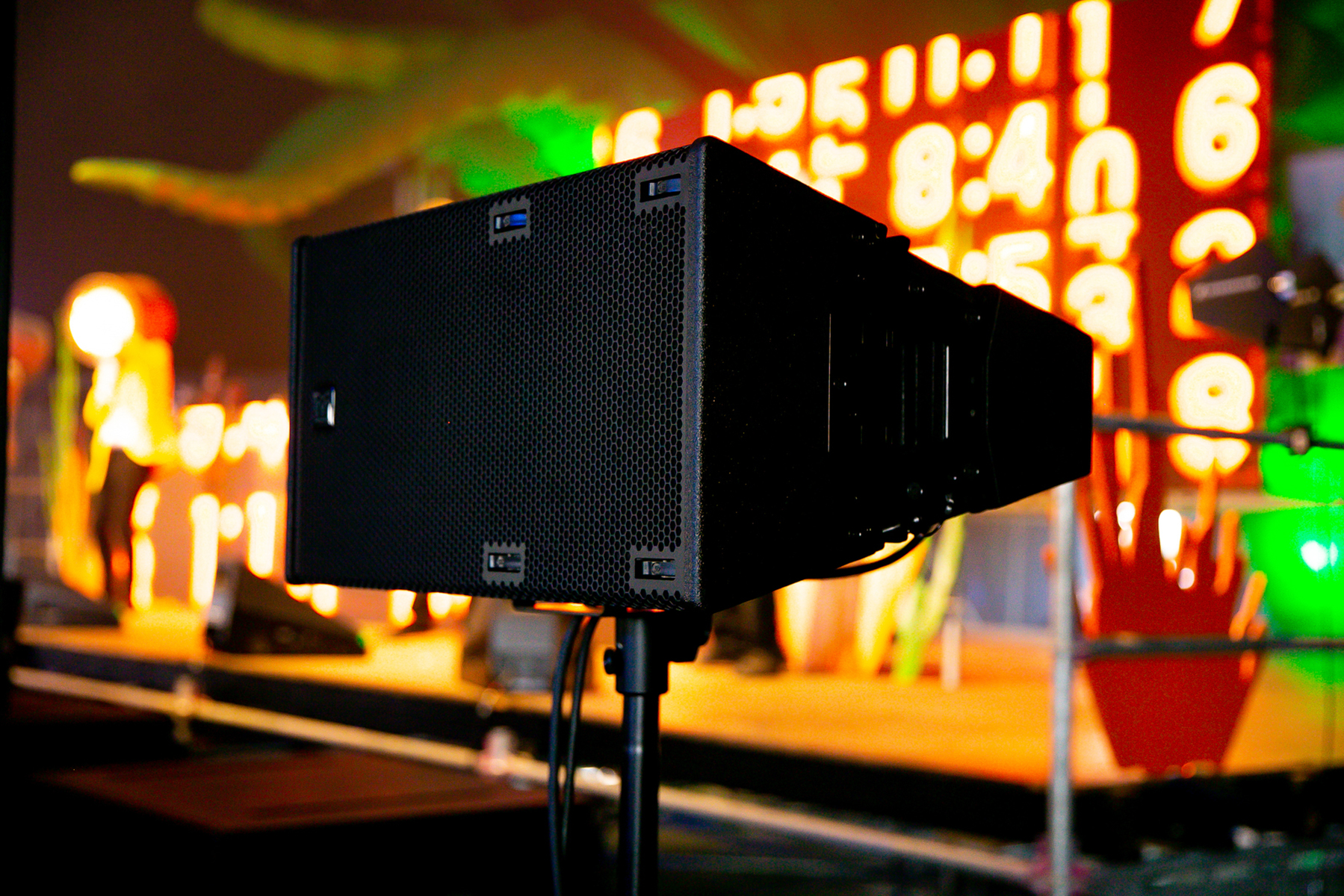 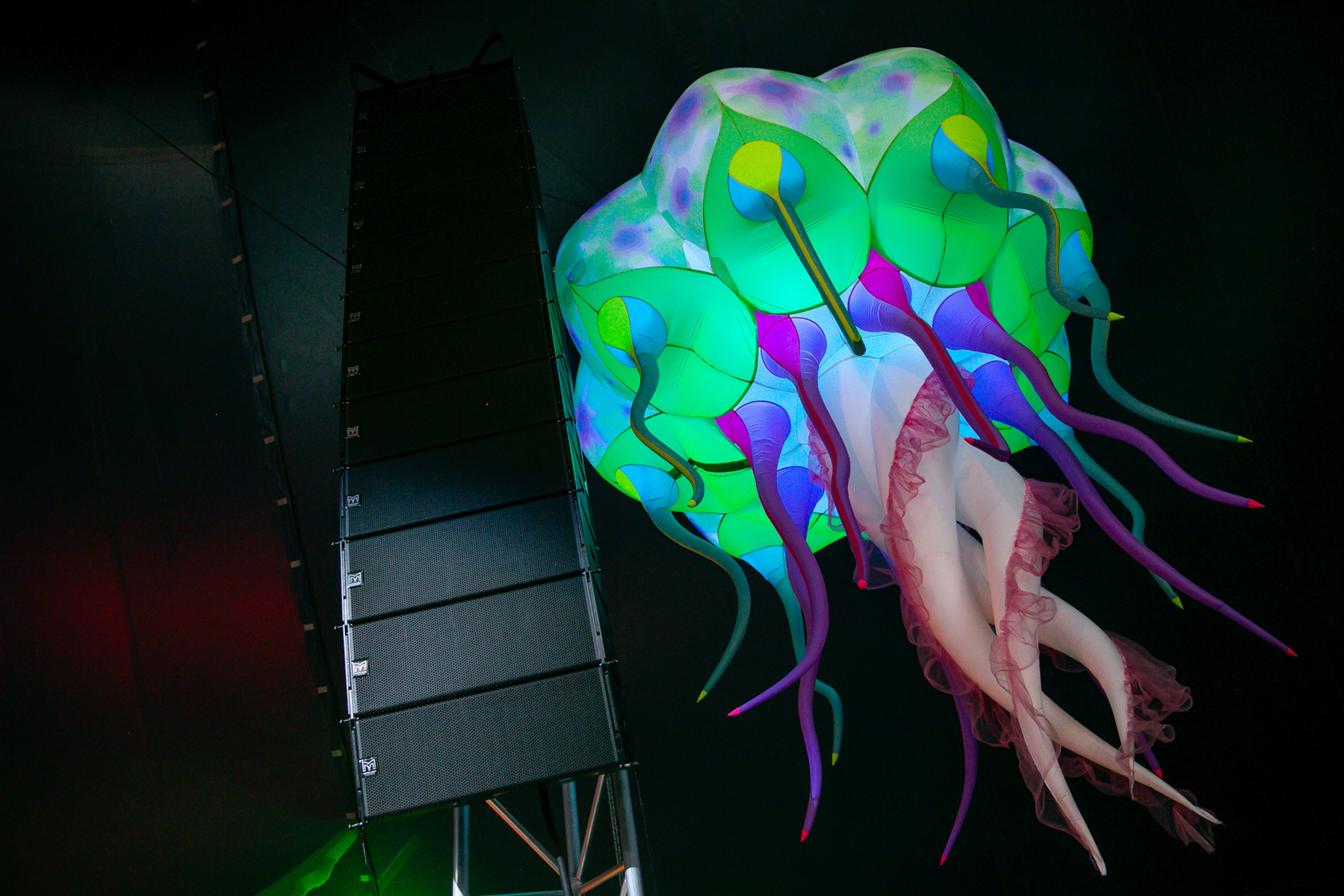 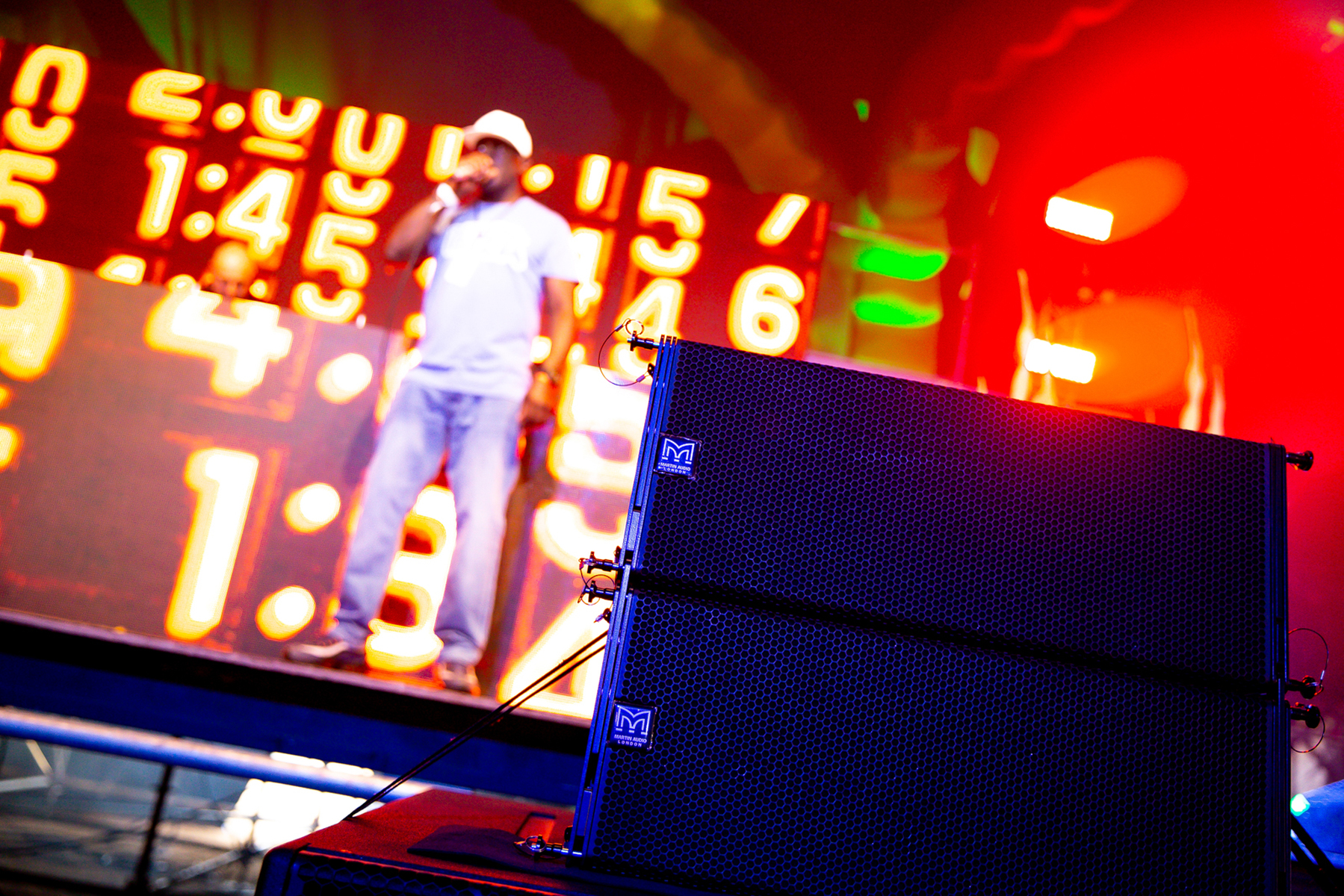 Staged by Clockwork Orange (Danny Gould and Andy Manston) the 12-hour dance party was designed to recreate the spirit of the nationwide recognised names in the 90’s clubbing scene, complete with VJ’s, special effect flame throwers, CO2 jets and dancers. An audience of 15,000 “old school ravers”, who had cut their teeth on the dance genre of the mid 90s— will agree it was a major success.

“This is the second Clockstock we have done with Clockwork Orange,” reports Galley, whose company are the in-house production company for race day and non-race day events at the Racecourse (formerly the Essex County Showground). “The first, pre-lockdown, was exceptional.”

DJs this time around included an A-list of veterans, including Armand van Helden, Danny Rampling, Seb Fontaine, Jeremy Healy, Brandon Block, Marshall Jefferson, Stanton Warriors … and many more. This who’s who of DJ superstars, many of whom had been familiar with Martin Audio installed systems at super clubs like the Ministry of Sound, were relieved to see the brand well in evidence again.

Paul Galley was equally effusive. “With Martin Audio it’s great to have a brand that’s on point. It always appears on riders and with its presence at Ministry of Sound, it remains a flagship brand, especially for dance music. It puts us in a very good position, and we were delighted to receive constant comments about how consistently awesome the sound was.”

With Martin Audio it’s great to have a brand that’s on point. It always appears on riders and with its presence at Ministry of Sound, it remains a flagship brand.

Of the nine stages, Martin Audio appeared on the three largest: Main Stage, Olds Kool and Clockwork—both inside big tops and outside.

This outdoor stage became the de facto second main stage, and according to Galley had the most authentic Ibiza feel with its theming and amphitheatre-like presence. Once again it was adorned with a flown MLA Compact rig, six elements a side, with six MLX subwoofers in castle cardioid. Front fills were provided by Martin Audio DD12s.

Probably the most adventurous stage, from a sound perspective, was Olds Kool, which took place in a 55m x 35m 6-pole big top, with single point 1-ton towers, enabling a Wavefront Precision (WPC) to be flown and optimised by Ben Tucker. ESL rigged 12 boxes per hang, run and processed in 2-box resolution by Martin Audio iKON amps. Six further WPC were stacked in three blocks of two for front fill duties, with low frequency extension provided by eight SXH218 subs in cardioid bridge mode. For DJ monitoring, six WPS were stacked three per side, supported by four SXC 118 subwoofers (two per side).

But the interest for Paul Galley’s sound crew were the two Martin Audio pole-mounted TORUS T1230 which covered the nearfield. “We had heard TORUS at Martin Audio’s open day recently, and it has exceptional quality for a fixed throw distance. For front fills here it was absolutely spot on and helped fill in gaps caused by the [tent] poles.”

The control and optimisation in this tent had been extraordinary, he said. “The noise cancellation behind the DJ stacks was phenomenal while the content inside the sound field was of exceptional quality. We were in excess of 100dB inside the tent but more important was the control. The cancellation outside was amazing, while ‘Hard Avoid’ [in the Martin Audio DISPLAY software] was used to mitigate reflections from the canopy and behind. We also chose bass cancellation behind the stage and achieved total rear rejection.”

But he said the real stars had been Martin Audio’s iKON amps. “There is so much processing and control, with everything visible on one screen; three different applications, all from one monitor.”

ESL also supplied FOH and monitor engineers for each stage, with all associated sound reinforcement, including Yamaha desks and Pioneer DJ equipment throughout.

ESL also supplied full production, including lighting, IMAG LED screens and control, special effects, stage platforms, stage structures (both fixed and mobile) with associated mains power generation. Paul felt blessed with a fantastic team supporting him to pull this large event off in what was a struggling and uncertain year.

Paul Galley commented, “It was a tall order for any PA system to cover each area, with the different structure characteristics and multiple stages in proximity. The application of cardioid subs and Martin Audio’s Hard Avoid function on the system design enabled us to give the optimum sound in each area with minimal spill and bleed into other stages.”