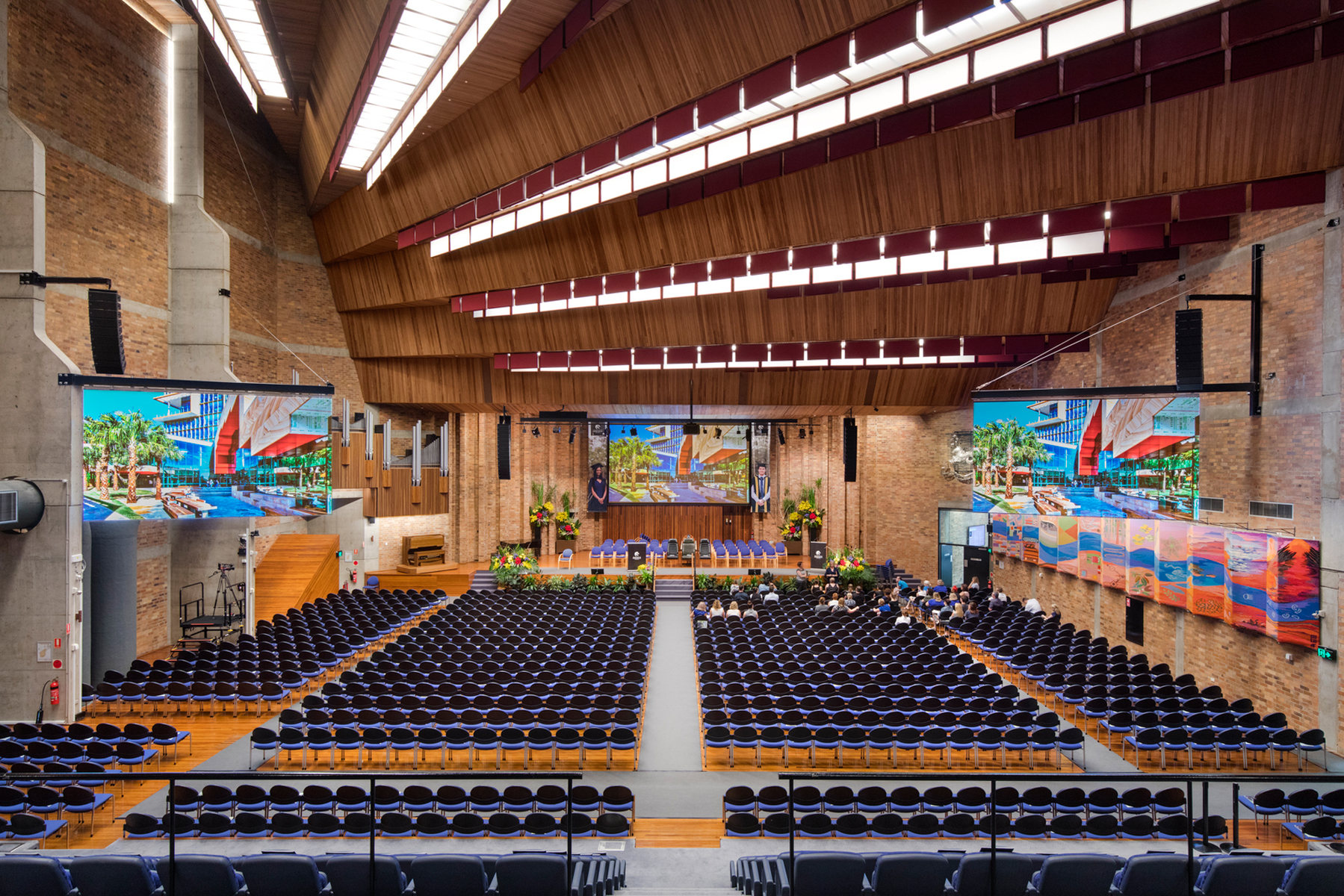 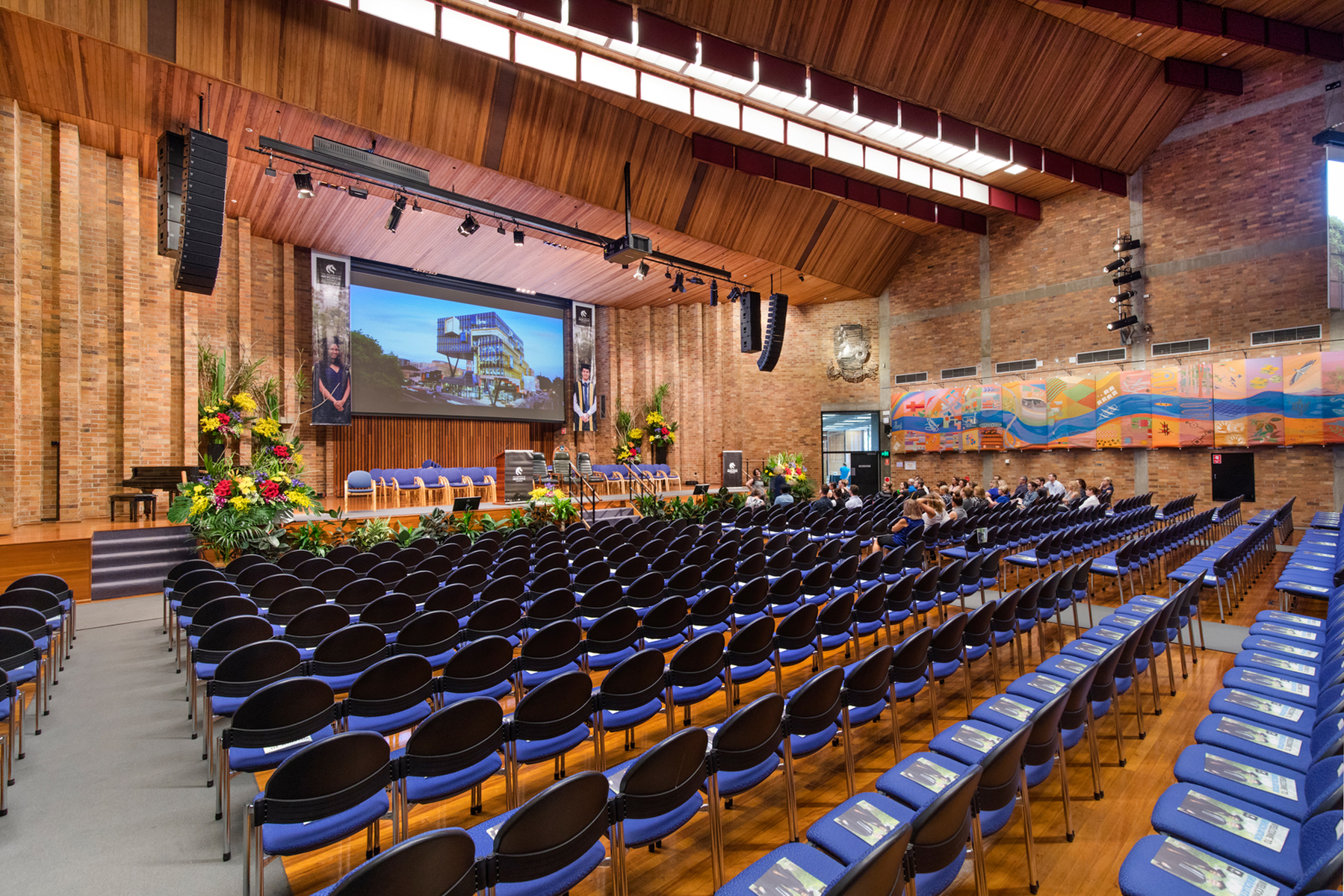 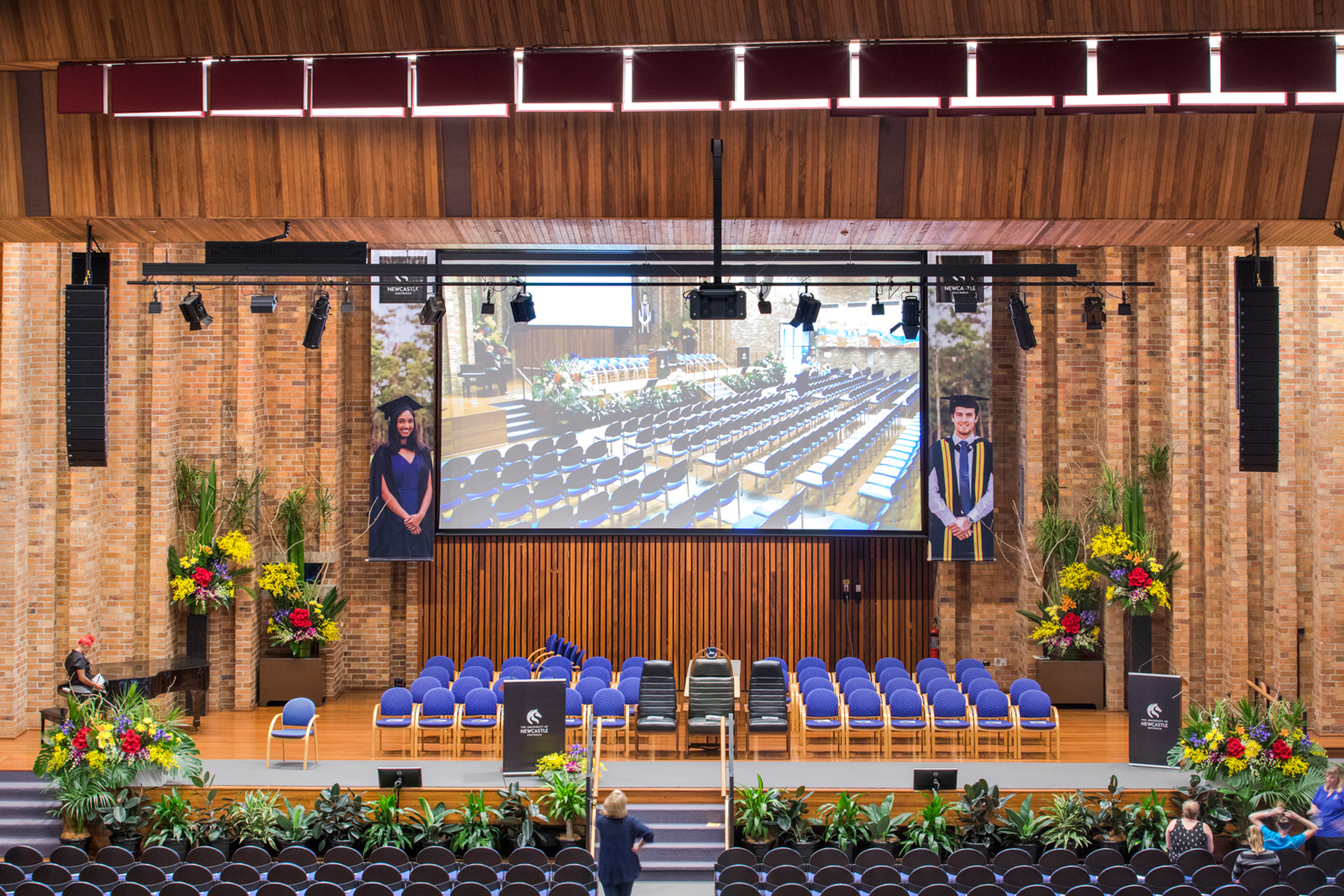 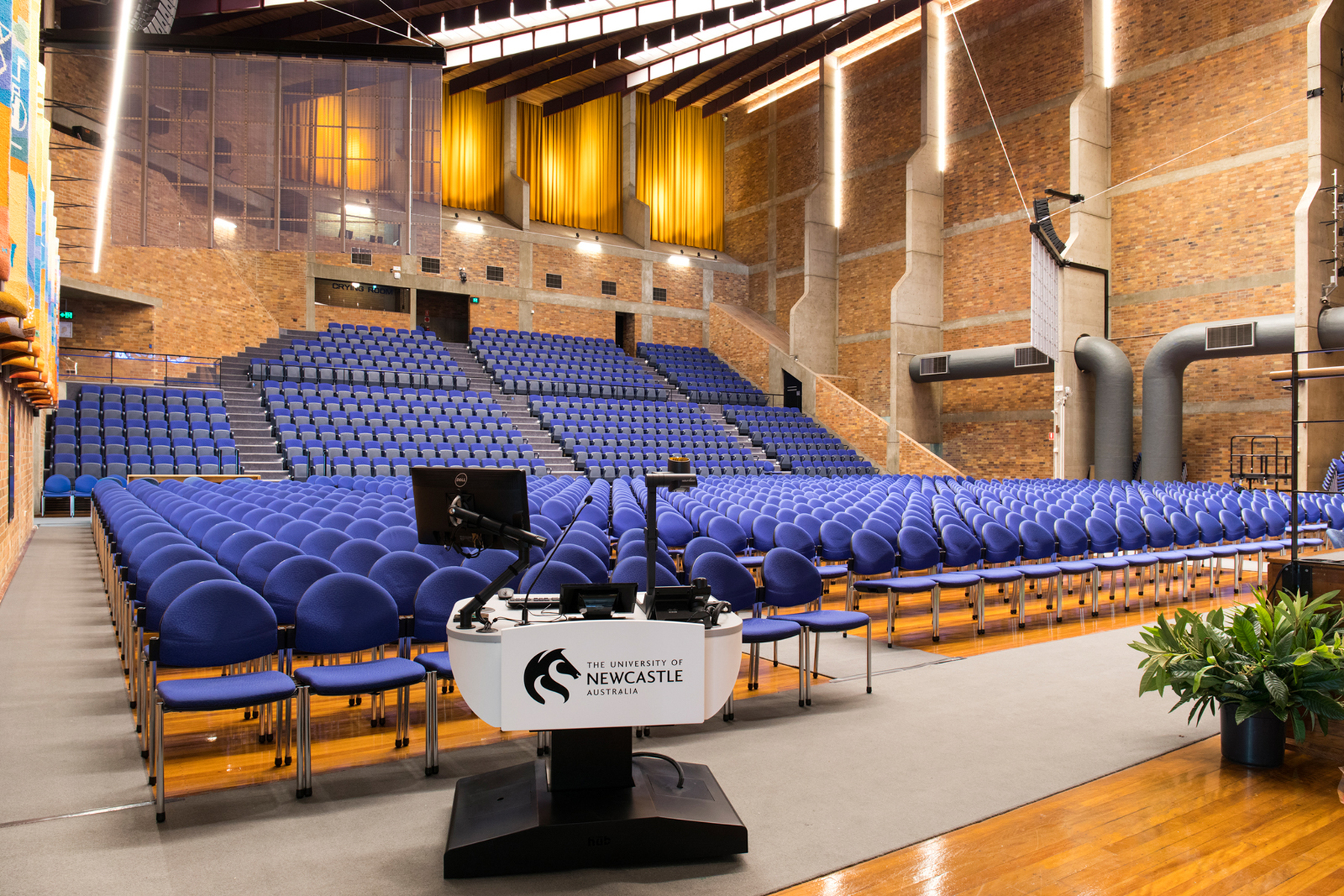 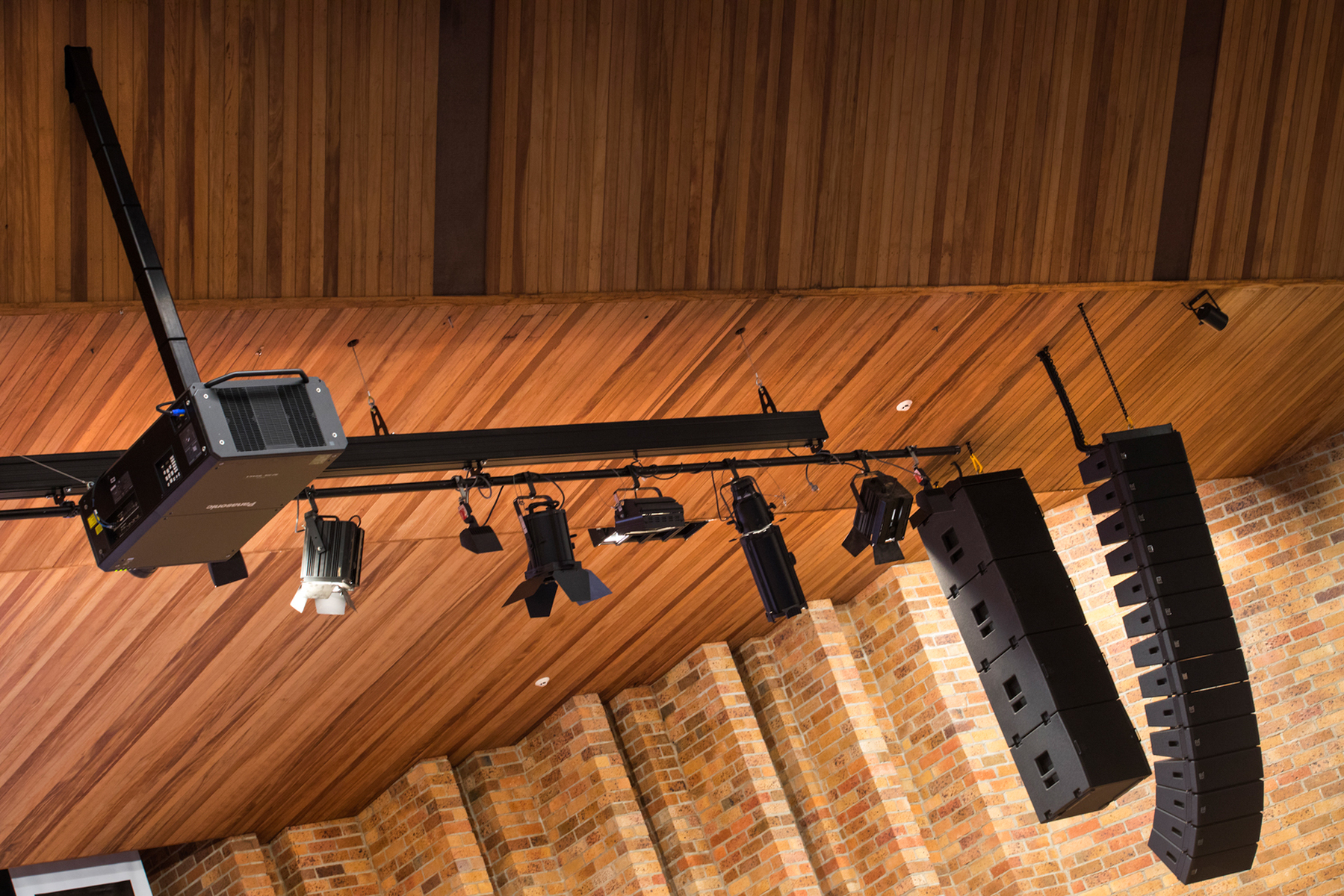 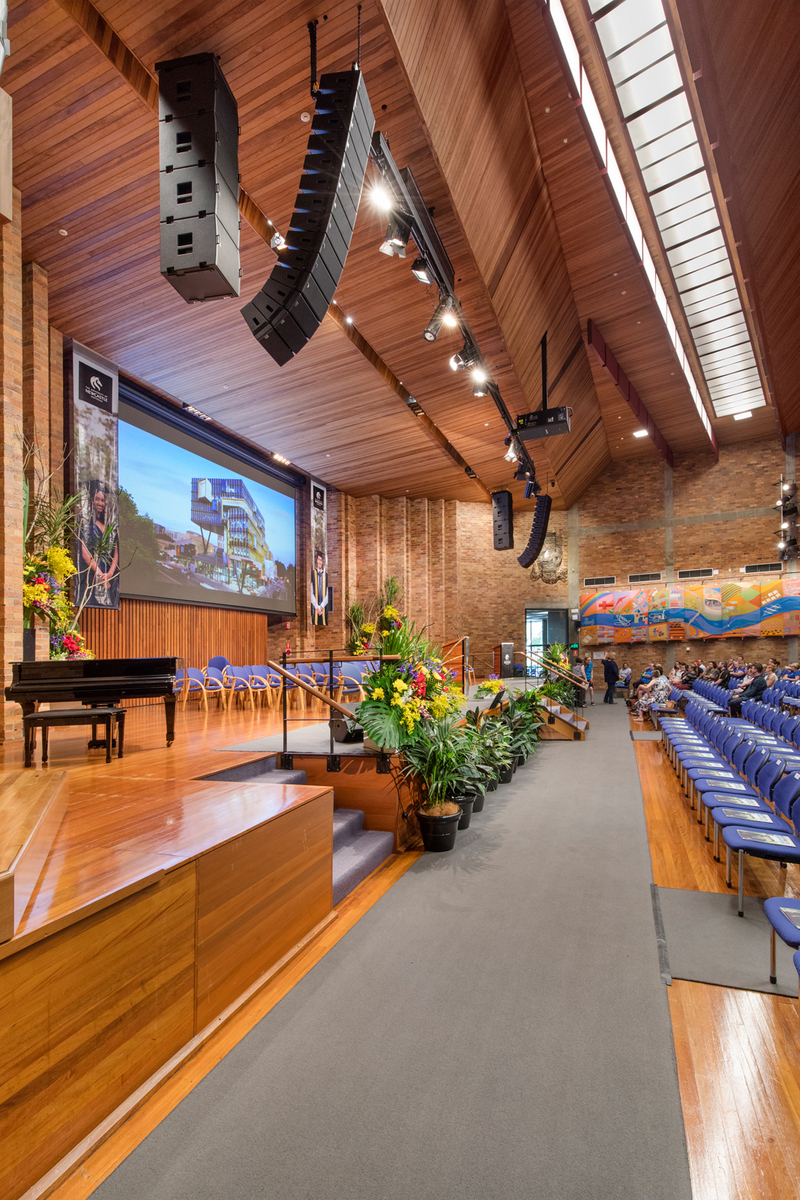 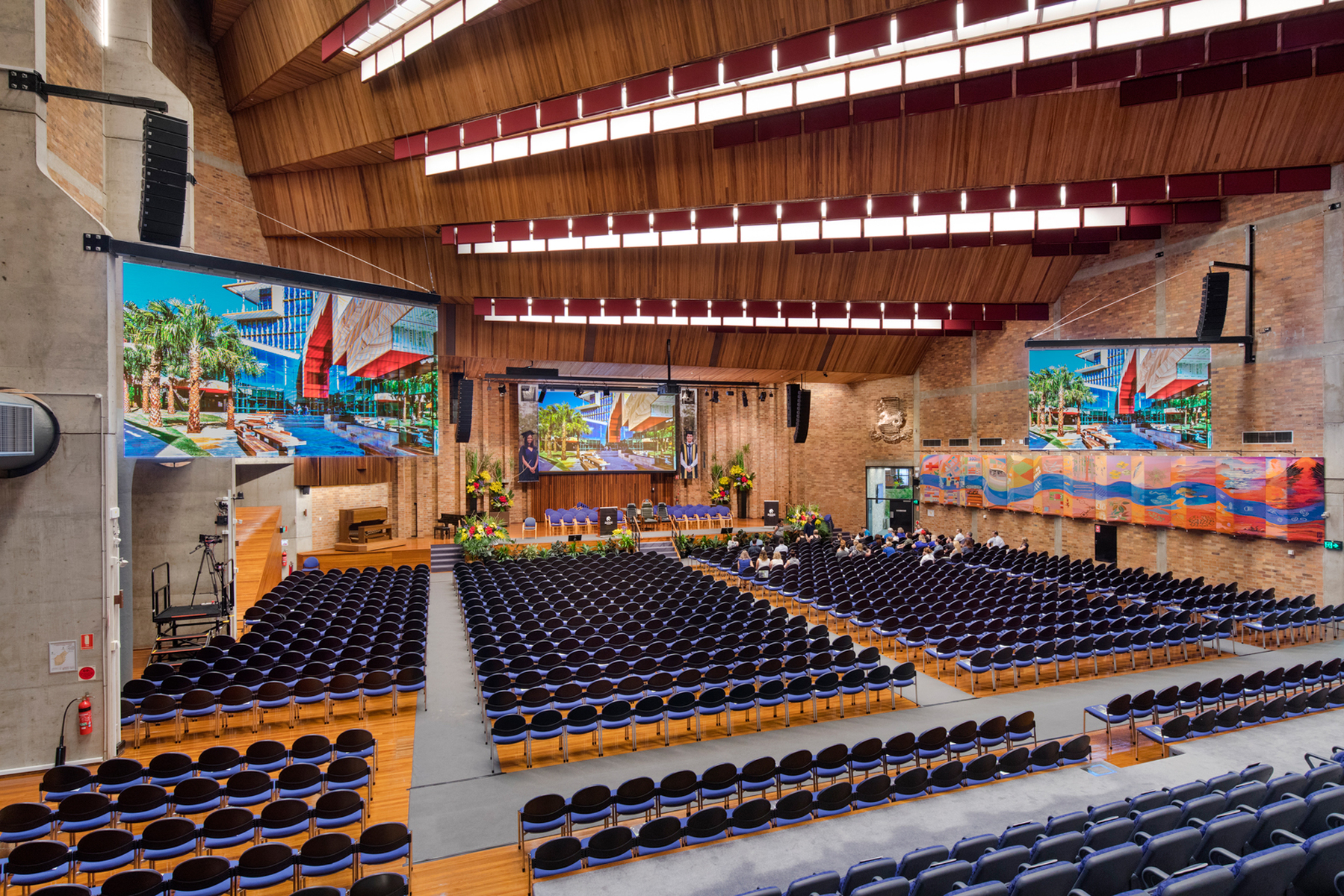 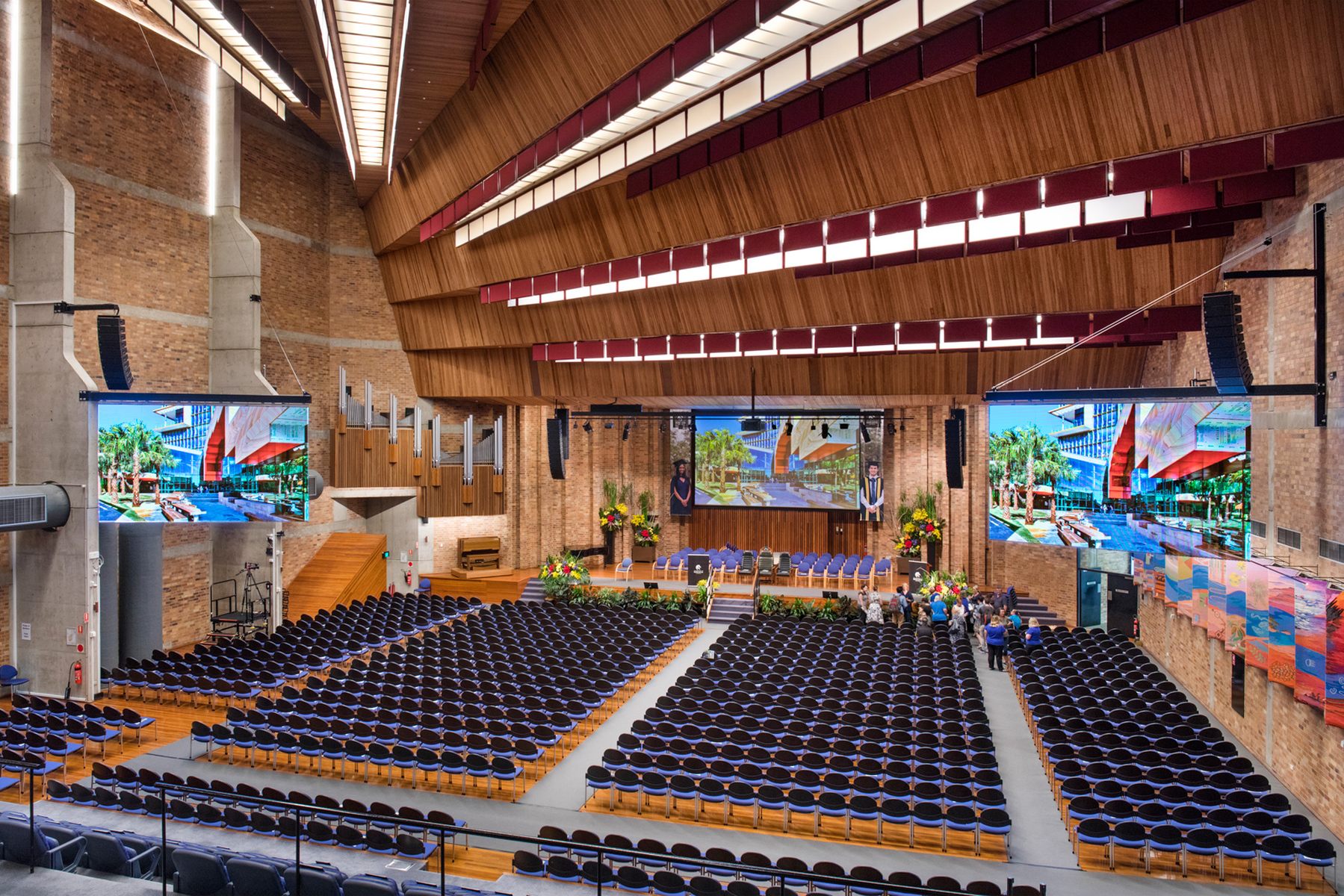 The building is multi-functional and used by the University and Newcastle community for a wide variety of functions ranging from formal University graduations, public performances, sit down dinners, open days, community events as well as teaching and learning activities.

The new audio-visual Infrastructure upgrade was focused around providing a significant improvement in audio and video quality and reliability within the Great Hall. The end result, based around a Martin Audio WPM PA, achieved that and more. It is flexible, scalable and supports the University’s teaching, learning and community outreach activities.

The Consultant / Project Manager was InDesign Technologies, led by Peter Coman and Livia Renhe, and when it came to the audio component they were assisted by the Technical Audio Group (TAG), Martin Audio’s Australian distributor, as they set out to convert the existing analogue system to a fully digital solution built on Audio Visual over IP technology. Another key specialist was David Gilfillan (Gilfillan Soundwork), a leading electro acoustic consultancy, who was engaged to verify and assist in the design and commissioning of the system. Finally, the team from Xcite Audio Visual provided their notable expertise for the integration of the project.

The room itself features total seating of 1,231 (including 448 tiered seats and 783 removable auditorium seats).

Martin Audio do something very cool in that you can not only steer sound to the audience area but you can set ‘hard avoid’ areas where it will actively cancel energy to these surfaces.

The biggest challenge the team faced was a tight timeline, exacerbated by a lack of existing architectural drawings. “The previous audio was inadequate for the room and unreliable,” recalls Coman. “It was absolutely paramount that the audio issues be overcome.”

The space itself was awkward; it’s around 50m from front to back with a stepped ceiling. Some areas have 20-metre high ceilings and there is a combination of concrete, brick and timber surfaces. “The 3D drawings allowed us to produce detailed audio mapping and models in order to determine speaker placement,” said Coman. “As we had hundreds of kilograms of equipment to hang from the ceiling, a structural engineer was engaged to examine the facility and tell us what we could and couldn’t attach to.”

There were a number of factors that led to InDesign specifying Martin Audio as the primary PA source. “In the first instance, the client had a previous Martin Audio installation that they were happy with, and secondly, we trust the brand. It provides a value for money solution and they were able to offer a system that was fit for purpose, and which met our budget.

“On top of that, the entire system is digital, so being able to incorporate the Martin Audio Dante foldback speakers integrated perfectly into the rest of the system.”

Finally, there was Martin Audio’s ability to meet a tight deadline and the support provided by TAG.

Amplifiers/FIR processing consisted of 7 x iKON iK81 advanced 8-channel amplifiers and 2 x iK42 4-channel amps. Due to the challenging acoustic space, every WPM and MSX enclosure was individually powered and processed.States TAG’s Ewan McDonald, “Martin Audio do something very cool in that you can not only steer sound to the audience area but you can set ‘hard avoid’ areas where it will actively cancel energy to these surfaces. This was really important given the huge reflector of a back wall and the lectern position which could be directly under the arrays or even in front of the lower cabinets.

“The Martin Audio Display software fine tuned the frequency response at every listening position and we were then able to download those FIR parameters for each cabinet into the iKON amps using Martin Audio’s VU-Net software.”

The biggest challenge had been the architectural space. “The room had lots of reflective, non-symmetrical surfaces and so we deployed a large delay system. We used the main FOH arrays to cover the floor seating, and the delays were flown out wide, angled down and inwards to minimise the reflections from that rear-angled wall. Being able to optimise the arrays in the vertical plane using Display meant we could keep any interactions between these two systems to a minimum.”

Peter Coman summed up the success of the project thus: “With a can-do attitude, 10 months of meticulous planning and an install period of 18 days, the University of Newcastle made a generational upgrade to the AV facilities in its Great Hall. The aging and unreliable analogue solution was transformed into a world-class, modern, digital solution befitting of the cultural significance of the Great Hall to the University and local community.”