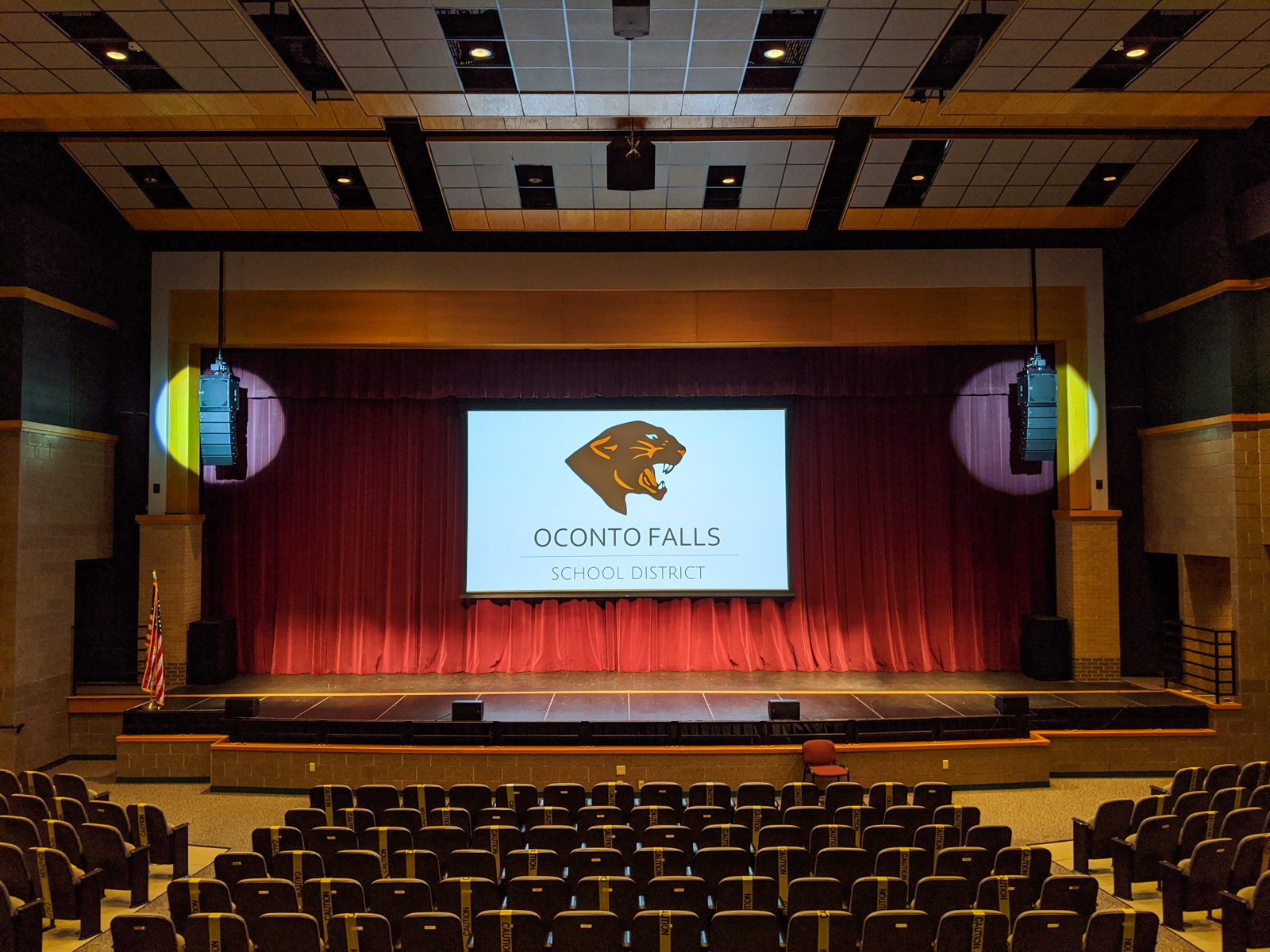 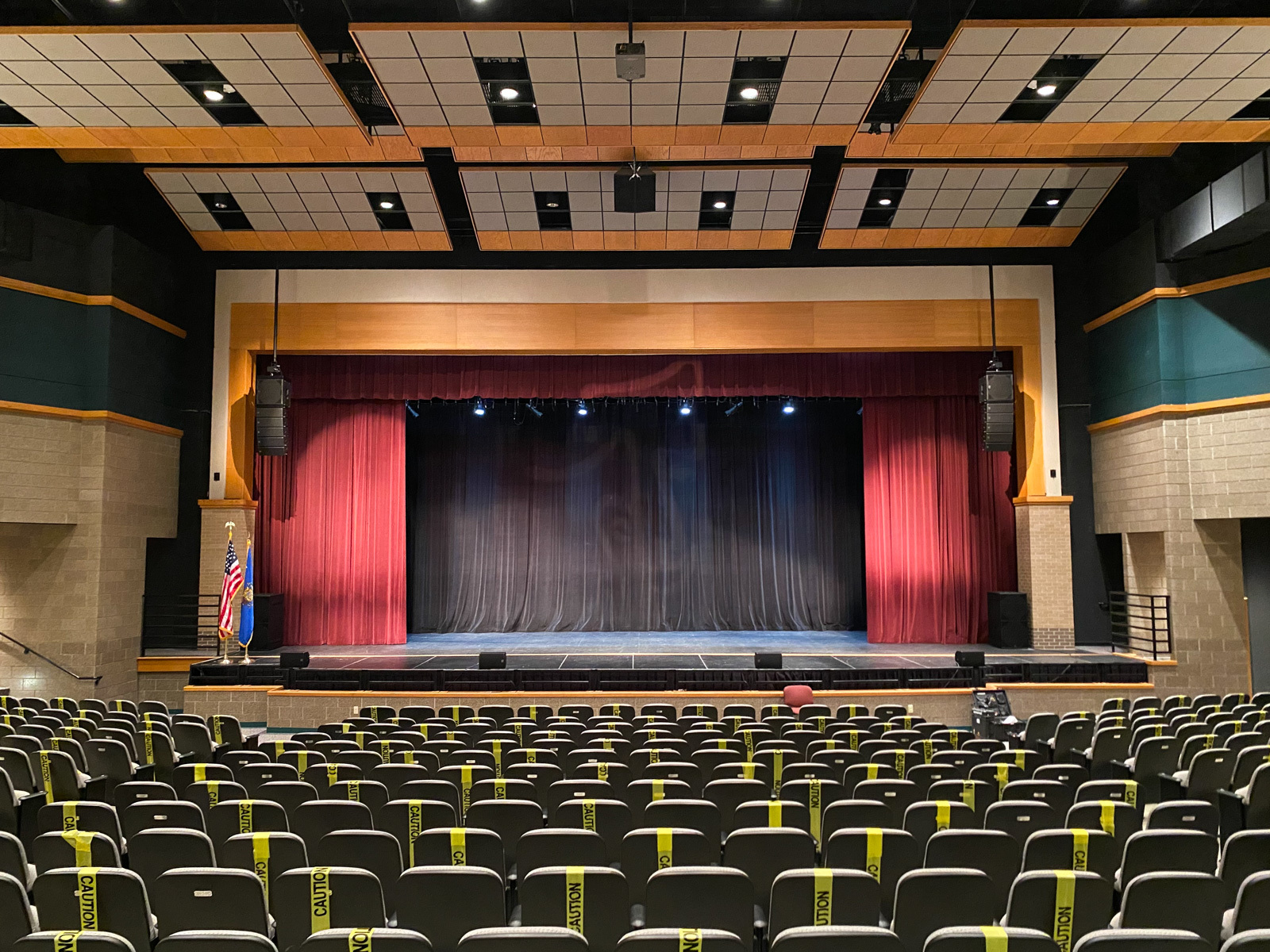 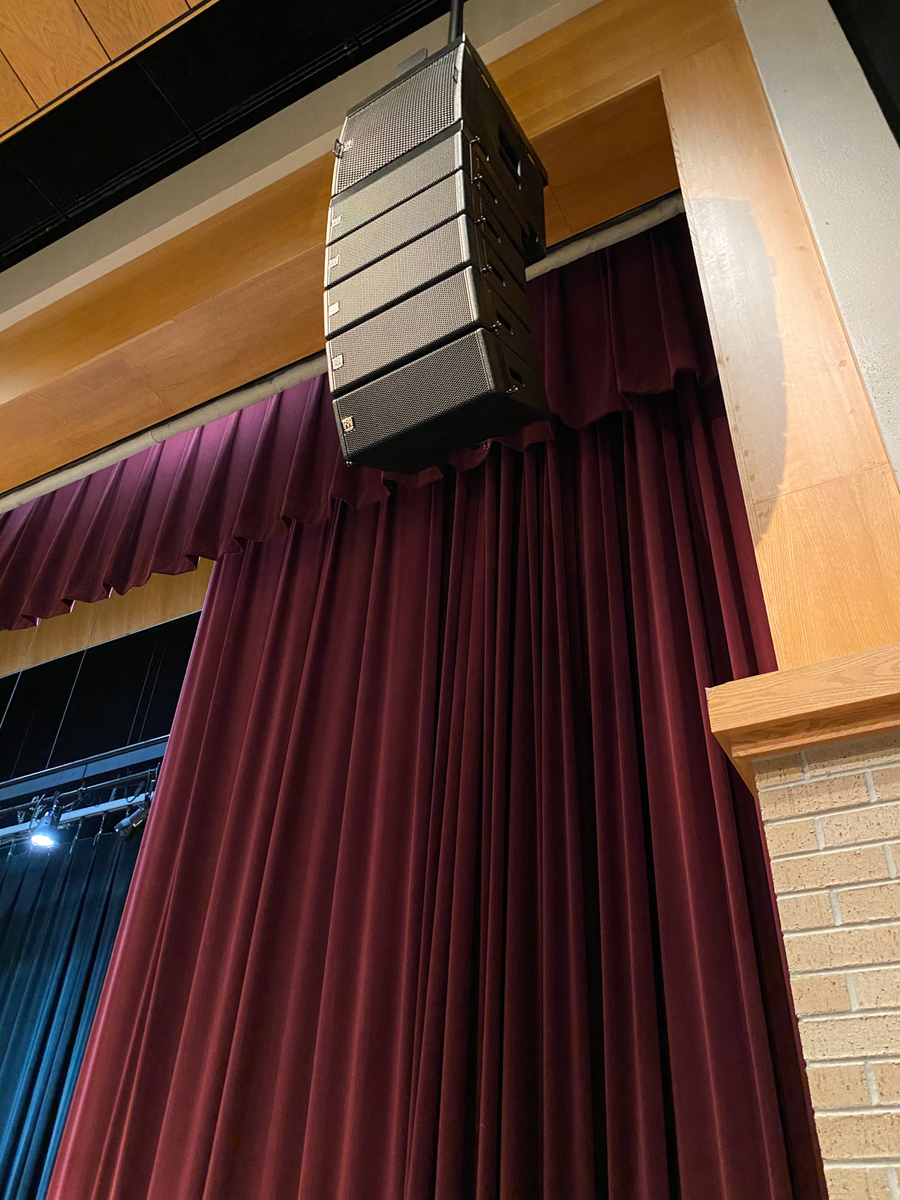 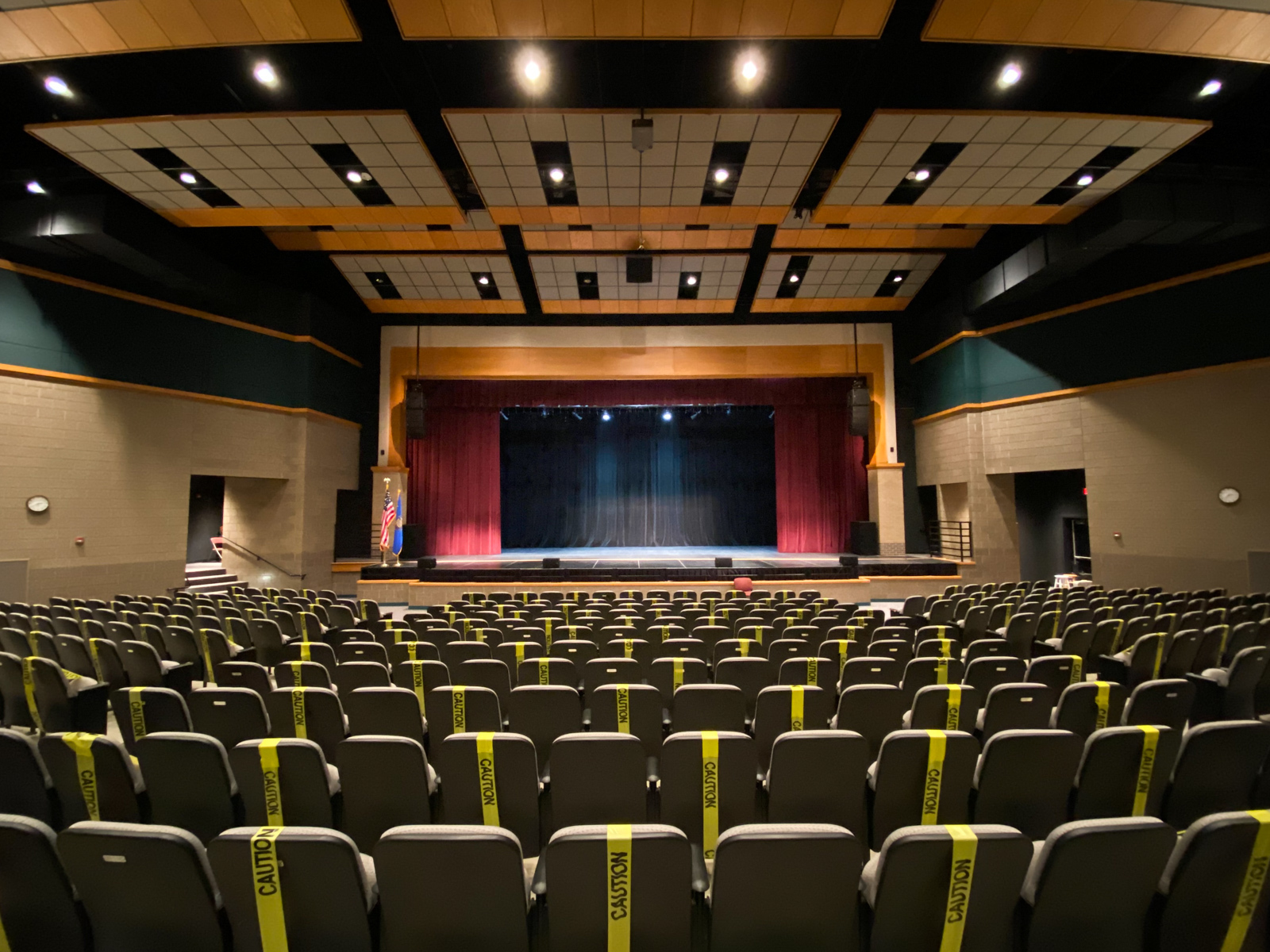 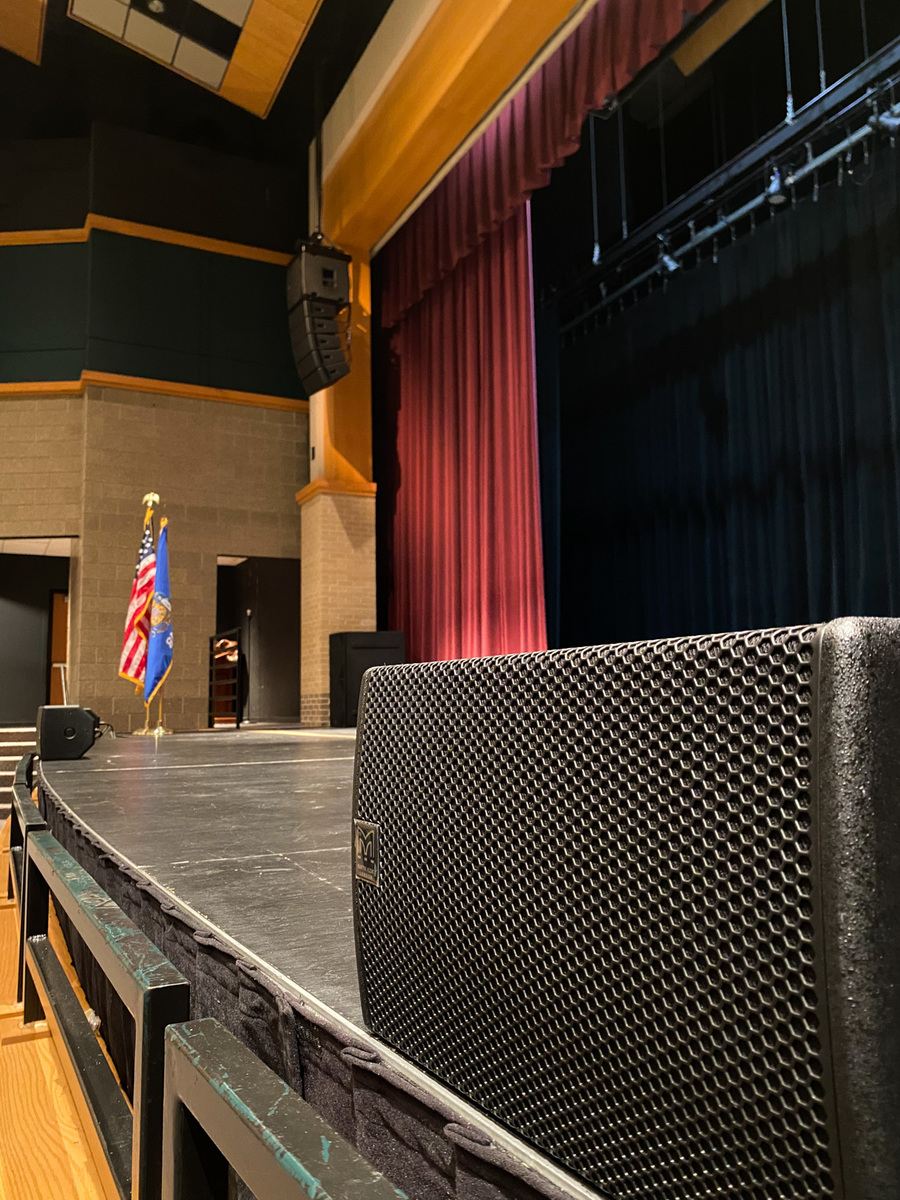 According to their project designer, Steve Littlepage, the contract was broken into two phases: a complete video upgrade, followed by the installation of the PA and system processing, as well as supply (and relocation) of a new digital mixing console.

The function of the PA was to provide an even coverage for a seated audience of up to 700, and be sufficiently versatile to serve not only a range of school events, but incoming productions hosted through a community foundation, for which the school has a long history.

The existing sound system was inadequate for both high school musical productions and outside productions, relying on a point source centre cluster hung from the ceiling above the orchestra pit, and a pair of smaller point source speakers mounted on either side of the proscenium. “The audio coverage across the audience was less than ideal, and feedback issues from microphones on stage were souring performances,” noted Littlepage. The primary goal for the new PA system, therefore, was to improve the experience for the audience.

Camera Corner was given carte blanche by the client to design a system “that would solve their issues and help the venue be a technology leader in the area.” After careful consideration, their PA of choice was the WPM—their first Martin Audio line array deployment.

“We considered a variety of manufacturers, focusing on line array solutions for the venue, but the WPM had exactly the right coverage to price ratio for the project,” Littlepage continued. “Using an array allowed reduction of the level variance from the front to back of the audience—unlike the point source solutions we considered—and the wide horizontal pattern allowed consistent coverage left to right across the venue.”

The designer was also aware that the locations for where they could place new loudspeakers were limited, and this additionally created weight restrictions. Camera Corner’s solution was to hang the arrays from the building truss—between the proscenium opening and the first ceiling cloud. “The compact size of the WPM allowed us to do this while still minimising the impact this location had on the lighting system.”

I am thoroughly impressed with the WPM. I had some reservations as to whether the compact loudspeaker would live up to its marketing material, but was blown away with the power and clarity of the rig.

Through a combination of the Martin Audio Display optimisation software and EASE modelling of the arrays, Camera Corner was able to illustrate the coverage of the system during the design phase and explain the advantages of this system to the school officials.

“Attention was given to reduce the amount of stage wash coming from the arrays as well as slapback off the rear wall. It was important to improve the gain before feedback of the system as the school theatre performances are regularly run by student operators.”

The design comprised five Martin Audio WPM elements per side, with one SXF115 subwoofer flown above each array.Two SX218 subwoofers sit at the proscenium opening to round out the bottom end for more audio intensive events, while four Blackline X8 speakers serve as lip fills across the front of the stage. The arrays are permanently hung, and the ground subwoofers and lip fills can be moved when necessary for a particular event or when not in use.

To further optimise this, the main PA system is powered by Martin Audio iKON amplifiers—one iK81 assigned to each array, in single-box resolution.An iK42 has been deployed for the SX218 subwoofers, with two channels per cabinet. Spare channels of the iK81 amplifiers, not being used for the arrays, are used to drive the Blackline X8 lip fills.

At the same time Camera Corner replaced the entire video system, and added Crestron control for the audio and video system. They incorporated two operating modes for the system, a ‘Performance’ mode for theatre, and ‘Presentation’ mode, for simple lecture style presentations.

In summary, Steve Littlepage said, “I am thoroughly impressed with the WPM. I had some reservations as to whether the compact loudspeaker would live up to its marketing material, but was blown away with the power and clarity of the rig.

“I knew that any line array solution would provide the necessary SPL but being able to circuit the array with single-enclosure resolution allowed the Display software to optimise each loudspeaker to provide a seamless audio experience from back to front.

“The coverage in the auditorium matched what we predicted in both Display and EASE. Based on this experience, I will turn to Martin Audio again for future projects. In fact we are planning an event for our own engineering team to dive into the details of the system and use it as a location for acoustical analysis training.”

The School’s Network Manager, Brandon Olsen, also praised the system which had become an expedient, as opportunities were starting to be lost to other venues.

“We have noticed a huge change in the quality of audio we are able to project within our PAC,” he said. “With the flexibility of flown arrays, floor subwoofers, and stage centre fills, we now have the ultimate confidence in the quality of what each member of the audience is hearing.

“With everything from meetings with 10+ microphones to full performance modes with audio, this system has expanded the PAC to levels we never thought were imaginable in the space. Wherever you’re seated, the audience experience never changes.

“With the flexibility and functionality of our Martin Audio system, the PAC usage has more than doubled and new opportunities are back on the table in this amazing newly updated space.”

Following the installation Camera Corner provided full operator training for the key personnel and assisted with the first event for the new system, which Steve Littlepage says “went fantastically”. Managing the project was Tony Stahl, and account manager was Chris Lecher.