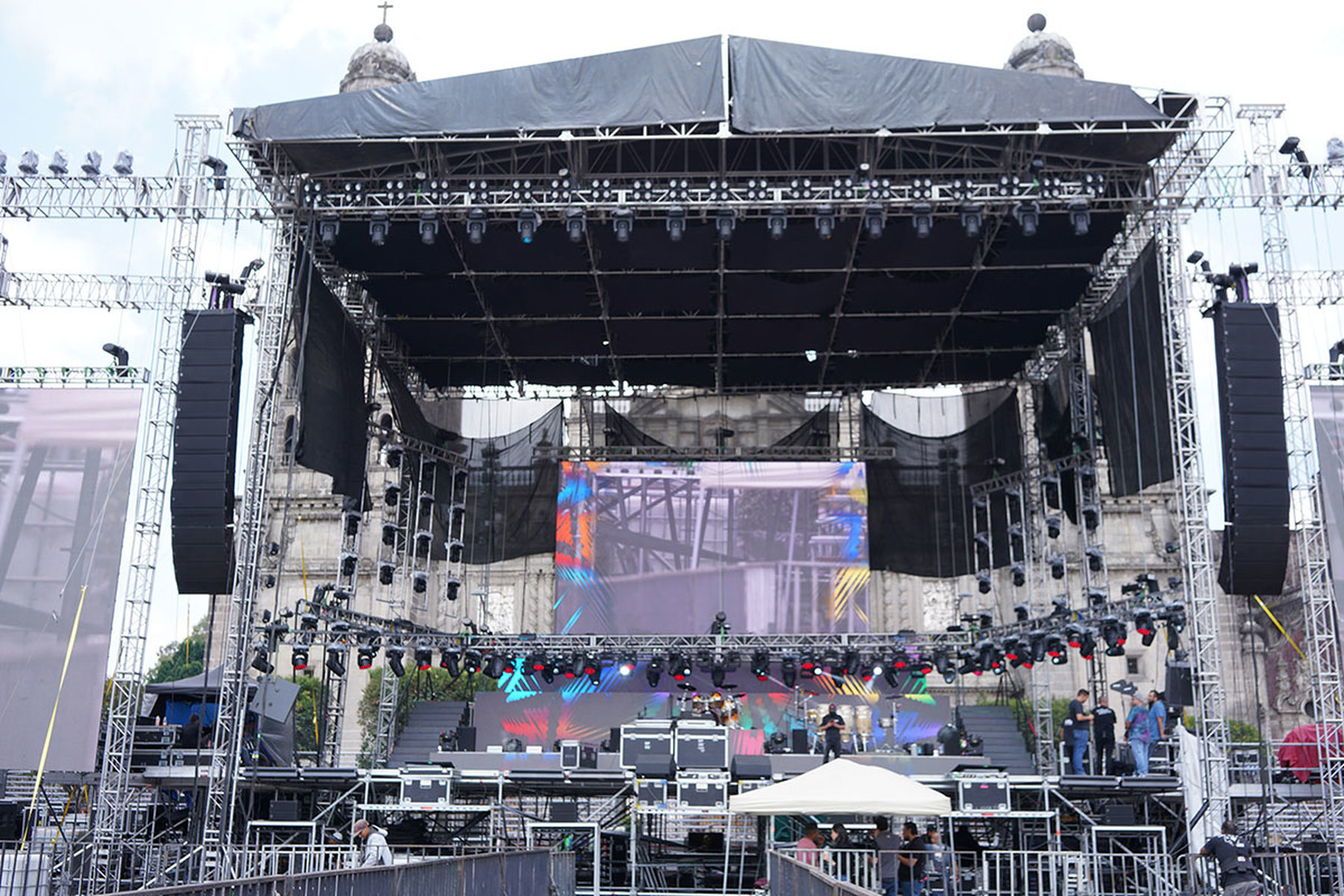 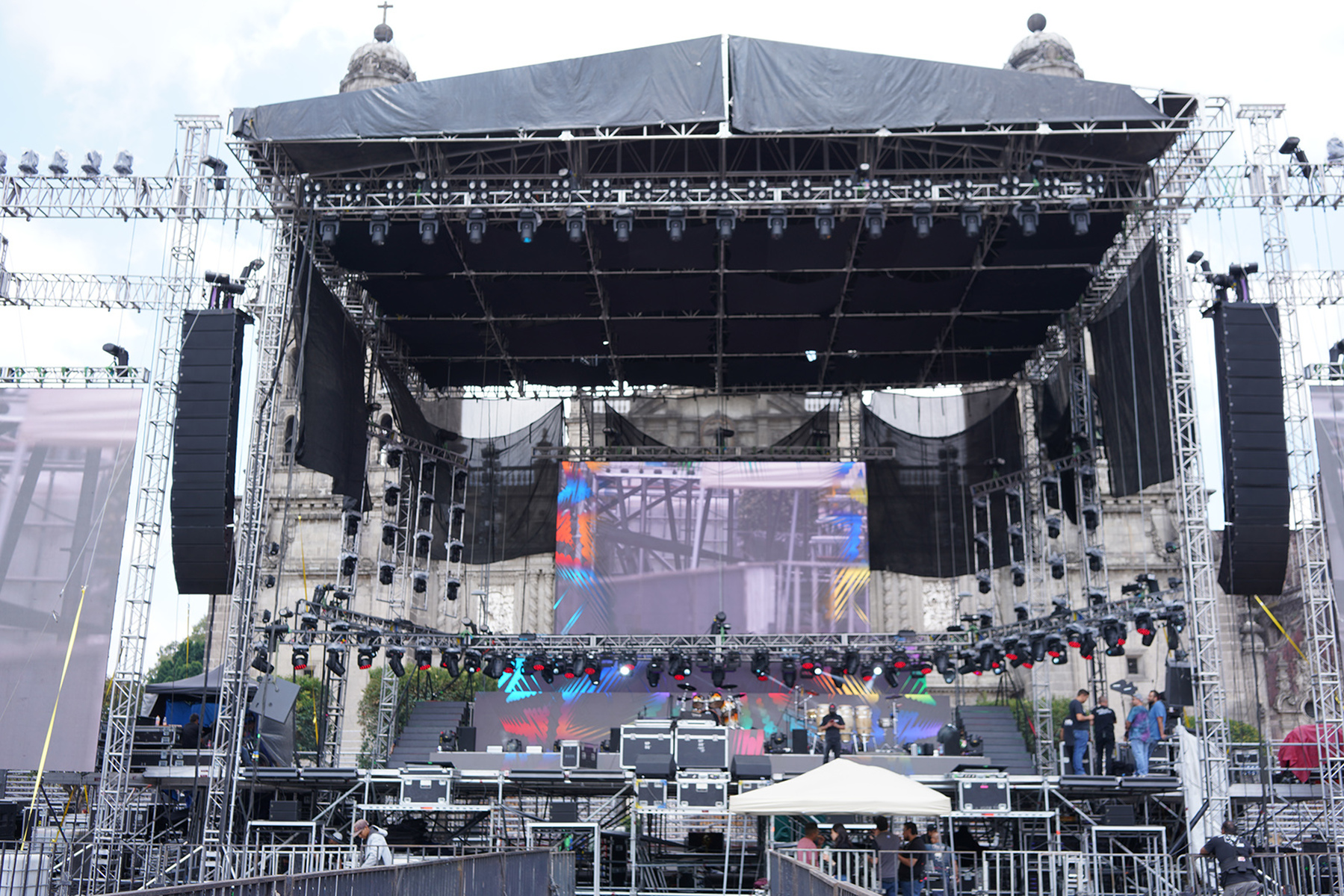 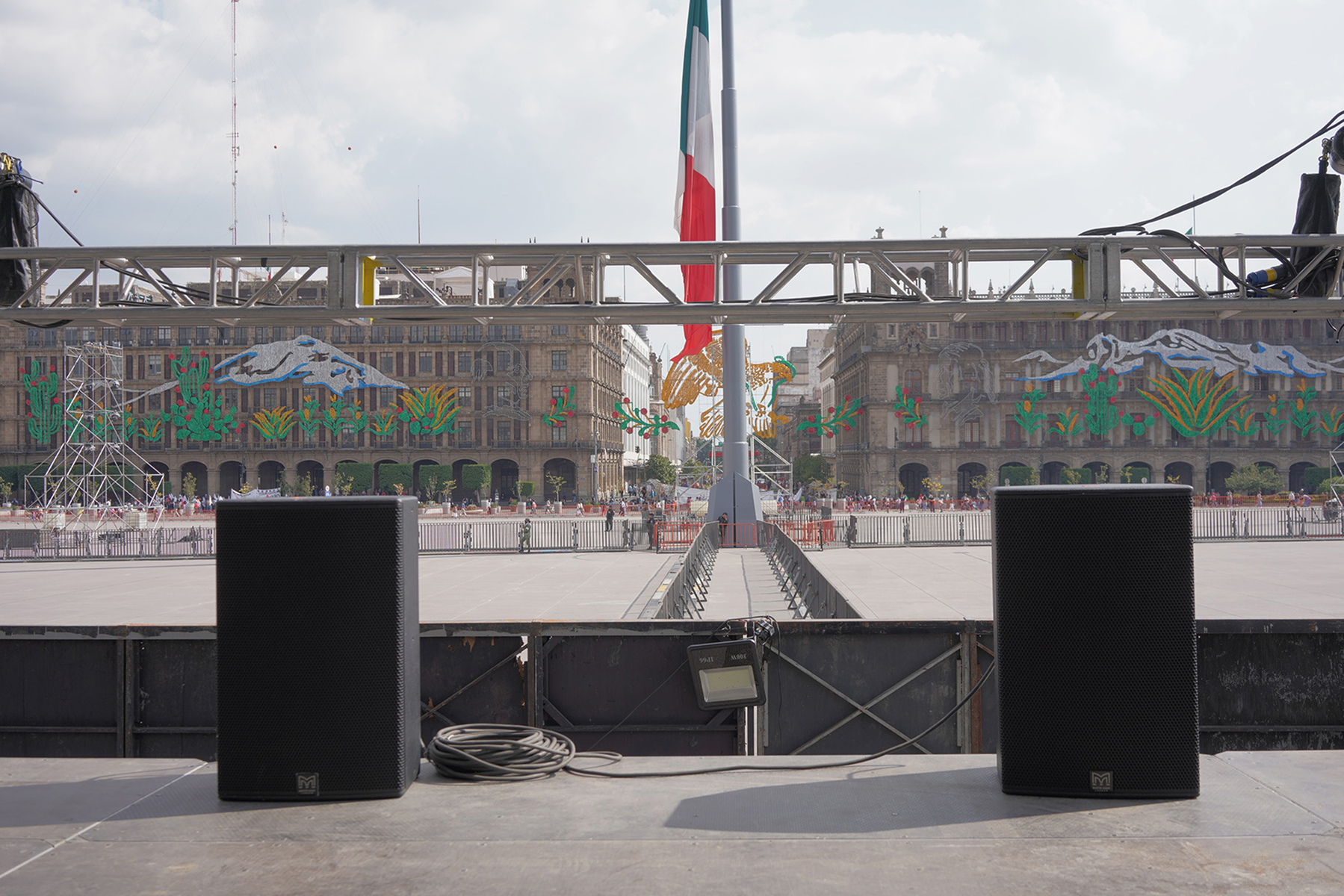 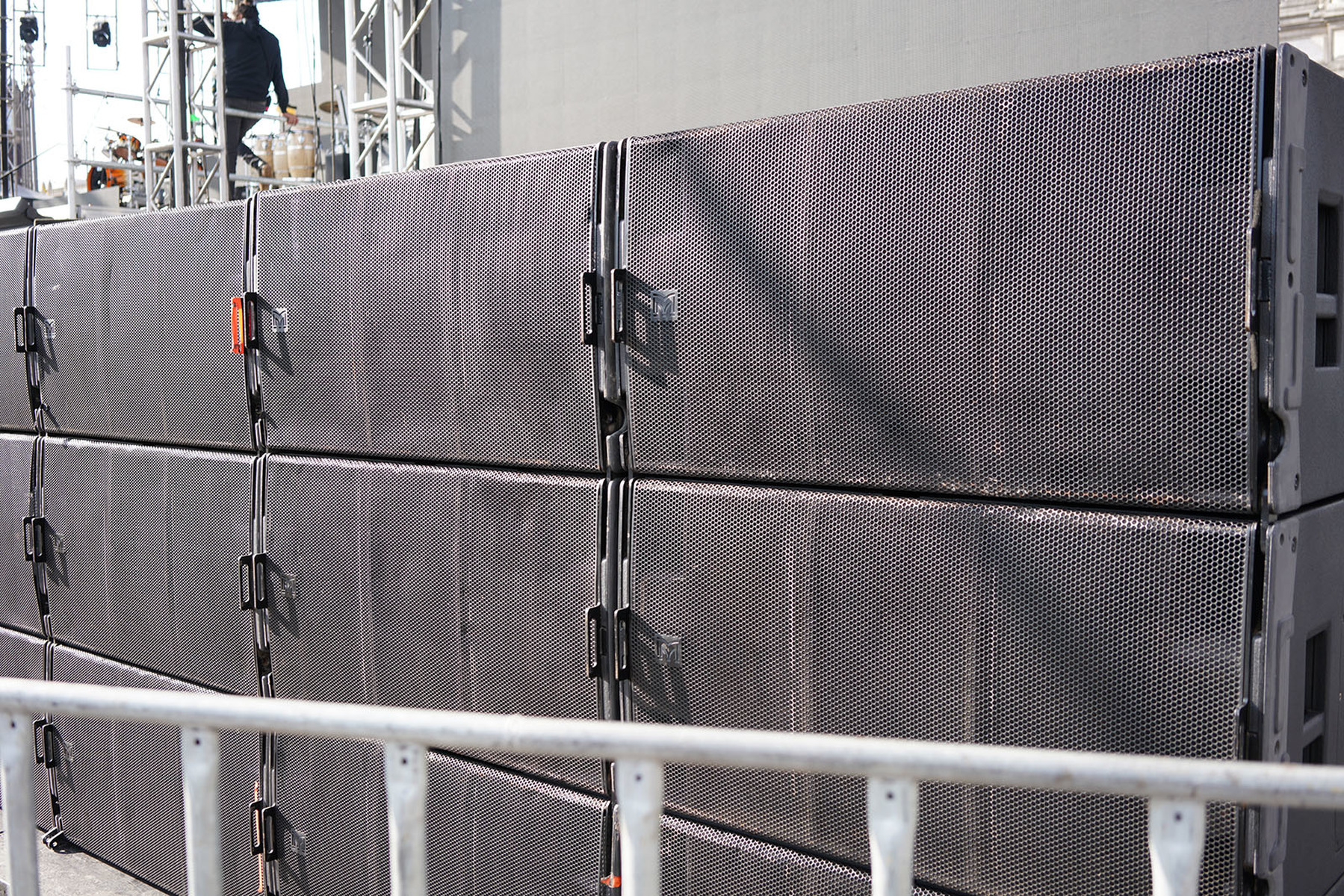 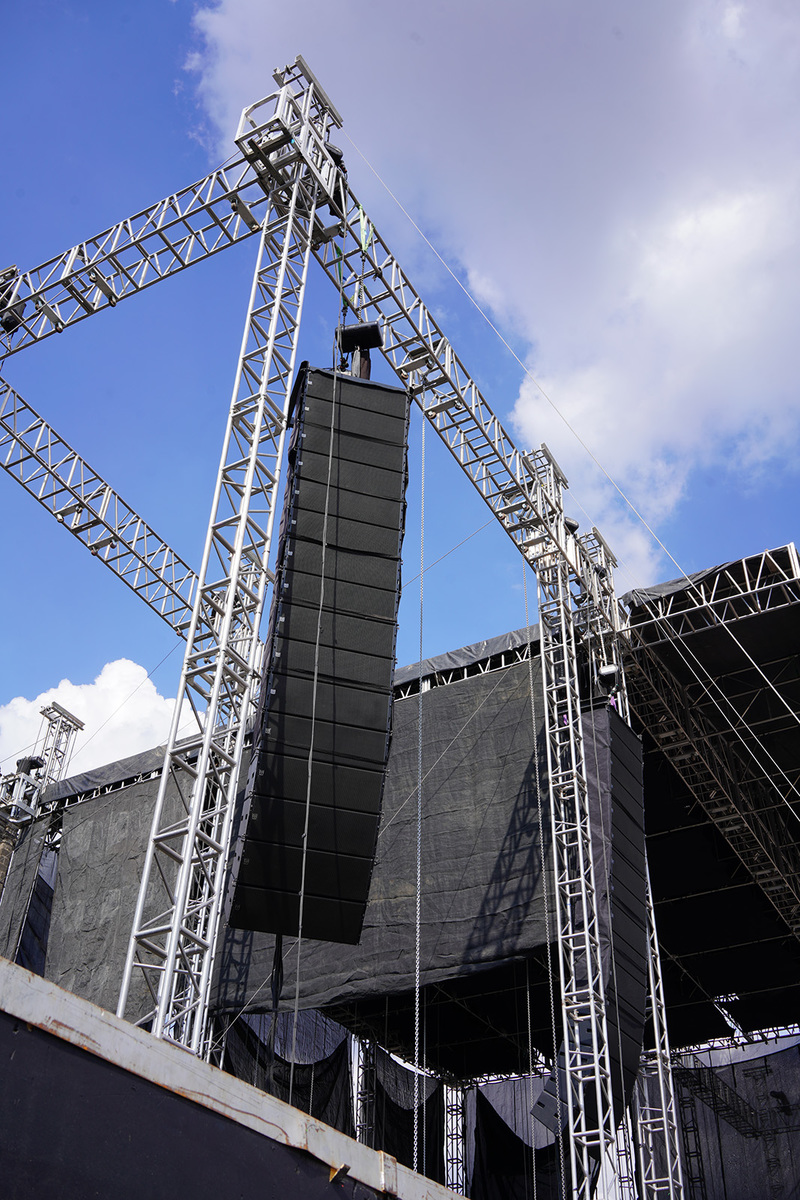 September 15 marks the commemoration of the Grito de Independencia (or Mexican Independence Day)¬—the most important ceremony in the country.This year it was able to resume again in front of an audience at the Zócalo in the centre of Mexico City after two years of being held remotely due to the COVID pandemic. According to official calculations more than 160,000 people celebrated the national holiday out on the streets again.

The vastly experienced Norteño group, Los Tigres del Norte—famed throughout the Latam countries—headlined the event with a show that lasted more than three hours.

The production work was carried out by the company KW, and for the third consecutive year Martin Audio systems were used as the main PA for the Ceremony. They provided audio coverage for a site measuring 46,800 sq.m.

For the presidential protocol, four clusters of MLA were designated, one pair with 11 MLA plus an MLD Downfill, and a further pair of outhangs with eight cabinets and an MLD (providing 120°H x 20°V dispersion).The main hangs covered a distance of 150 metres and the lateral clusters 130 metres.

On monitors and sidefills were Martin Audio’s Blackline F10+ and WPM series—servicing both the Mexican Army Chorus and the speech delivered by the President of the Republic, Mr. Andrés Manuel Lopez Obrador. For the Chorus’s monitoring the four Blackline F10+ were fed from iK42 amps and for the presidential monitoring, four WPM per side, in stereo format, were set in the presidential box.

This system delivers the result that any engineer is looking for in terms of audio quality, power output, control and design.

An independent system was set up for Los Tigres del Norte comprising 32 WPL for PA (16 per side), with 32 further WPL for outfills (16 per side) and 24 SXH218 subwoofers, plus 24 MLX set in a gradient. Eight WPM (in four stacks of two) were detailed as front fills. The main system covered the first 135 metres, while four delay towers comprising eight MLA each were set at 90 metres to cover the back of the Zócalo and surrounding streets. Two further delay towers were placed 200 metres from the PA, with 12 WPC elements.

Speaking of the gradient arrangement, Proactive LATAM audio design engineer, Carlos Aldama, said, “In this way and with the help of the iK42’s internal DSP processing and the internal DSP of the MLX, it was possible to make a configuration where the stage area and all the low frequency energy was removed from the side of the attendees.”

The band’s FOH sound engineer, Grammy Award-winning Gabriel Martínez, admitted that having been a fan of MLA he was also pleasantly surprised by the acoustic performance of WPL. "Martin Audio is always a guarantee," he stated. "I was impressed by the sound pressure we had at almost 100 metres and the audio design for the show in general. I had already worked with WPL previously in Orizaba and Morelia but the difference in adjustment and alignment here gave an additional image as if it were another system.

“This system delivers the result that any engineer is looking for in terms of audio quality, power output, control and design."

The two systems could not be used simultaneously, since the main stages were adjacent to each other. For the ceremonial presentation, the PA was placed at the National Palace and for the concert, it was placed in front of the Metropolitan Cathedral, with the sound directed towards the Government building.

"For Proactive LATAM, representing Martin Audio, it was important to be chosen again, and recognised for our commitment of support,” stated company founder and CEO Berenice Gutiérrez. “In addition, we were honoured to be trusted, not only by the production manager of Los Tigres del Norte, Luis Antonio V, but also by the managing director of KW to create an audio design that would allow them to be comfortable. We should also give a special mention to KW for their overall production coordination, which was a huge challenge.”

Oscar Tovar, Proactive LATAM technical sales engineer for the region, added: "For the third time, all the equipment used was from Martin Audio, and once again great results were achieved. Returning to the traditional format again this year we were able to integrate two areas, to serve both the Government protocol and the concert.

“It was a big challenge but fortunately everything went as planned, since this is the most important event in the country, commanded by the Mexican President. It was great that more than 160,000 people were able to assemble at the Zócalo and receive the same high-quality experience, and that we had the time and sufficient tools to ensure that it happened.”

And Carlos Aldama concluded, “The incredible result we delivered with Martin Audio, was down to the precision with which the DISPLAY 3 software functions, since the results obtained were practically identical to the prediction. The intelligibility of the equipment was amazing.”