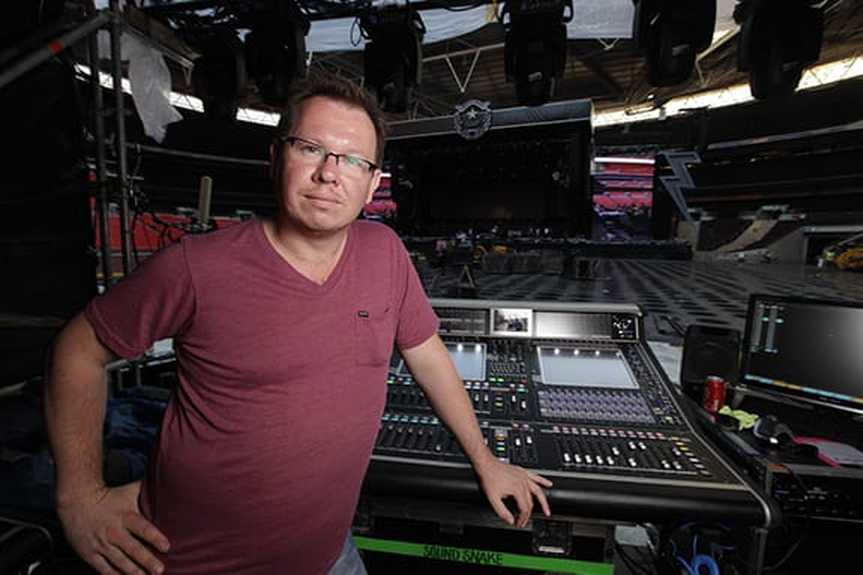 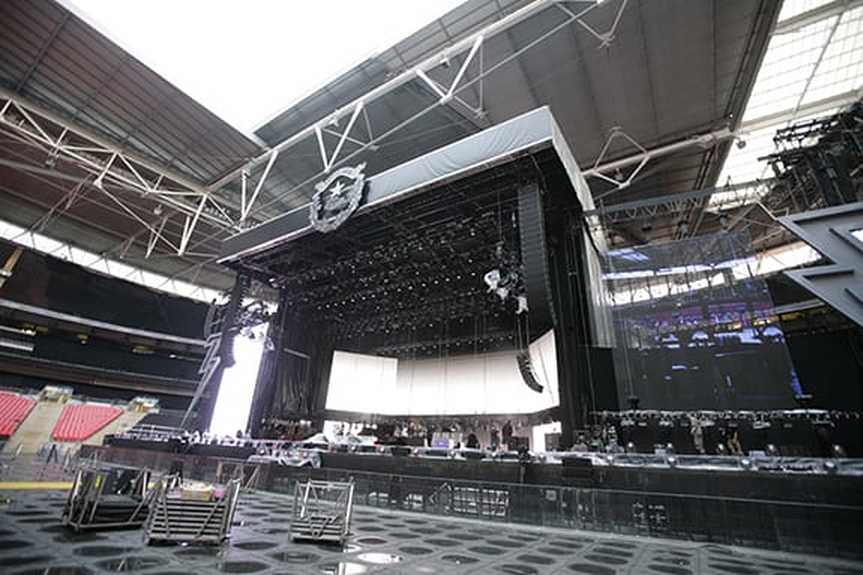 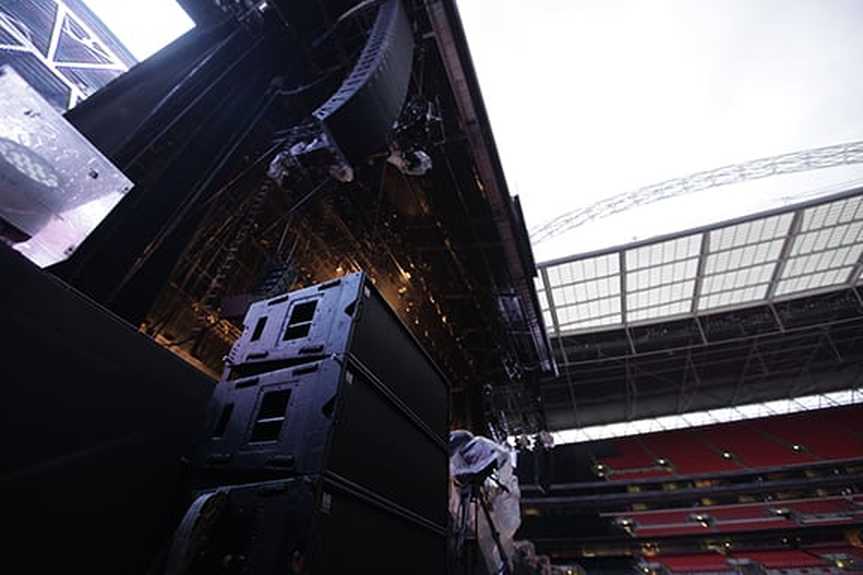 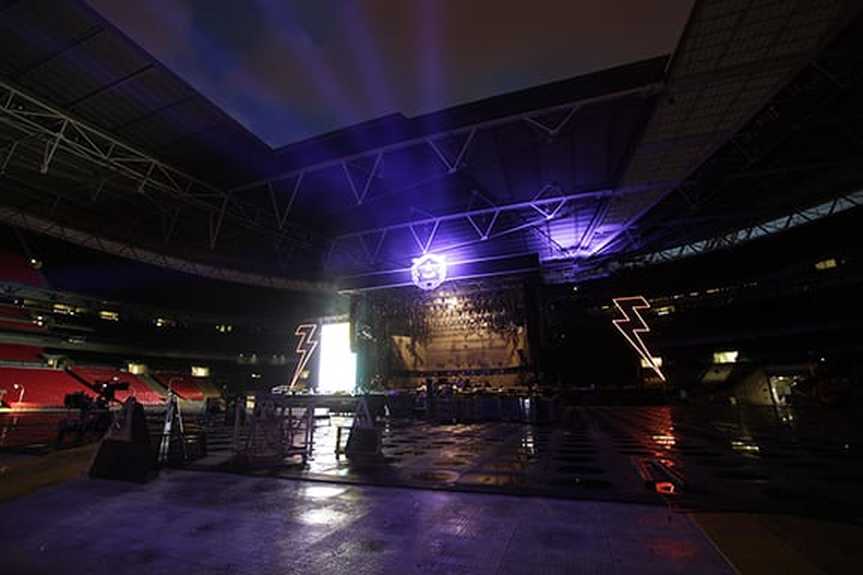 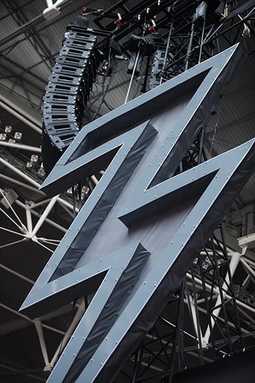 Despite his long association with both Capital Sound and Martin Audio PA systems, dating back to The Strokes, it was never a given that Manchester-based sound engineer James Gebhard would automatically select the new award-winning MLA loudspeaker array as top of his tour rider for the Killers Battle Born world tour.

It required unconditional cooperation, commitment and enterprise by Martin Audio's premier touring companies on both sides of the Atlantic - Delicate Productions in California and Capital Sound in London - first to convince him of the merits of the system, and then to provide the resource.

Seeking a flagship system for the tour Gebhard still needed reassurance about the merits of Martin Audio's ground-breaking technology when Delicate took the unusual step of flying him out to LA - believing that once he had heard it (and tried it for himself), any alternatives would be rendered obsolete.

'Delicate flew me out for some hands-on experience and fired up a seven box hang with 12 subs in their back yard. I did the virtual soundcheck, revised my show file and couldn't believe how clear and precise it sounded. With MLA you could hear every nuance. From that point it was hands down a winner for me.'

This was corroborated when he moved onto Indianapolis to hear the system in action with the Zac Brown Band and meet PA tech Preston Soper - an MLA devotee since first setting his hands on SES's MLA system more than three years ago.

'With Preston I had the freedom to walk the gig right to the barrier at the back, and there was no phase shifting whatsoever. Everywhere I went the sound was exactly the same. Initially you would think, 'Well why wouldn't it be?' But I have never heard anything like that before. As soon as I heard that, it completely sold me on the system.'

Delicate actually picked up the tour from Capital Sound in the UK, although somewhat anachronistically, it was only after the sound engineer had experienced his Californian epiphany that Cap readily agreed to invest in the system.

James Gebhard: 'I wanted the best provider of that system and having been with Cap since 2001 they immediately made the decision to buy MLA. For a service provider to say 'if that's what you want', knowing that it would require a huge financial commitment, was just amazing. It speaks volumes about the relationship we have.'

The result was identical MLA systems waiting on both sides of the Atlantic, assuring a seamless transition in terms of coverage, audio quality and impact.

The sound engineer recalled the first time he actually took charge of the system. 'It was in the two-week production rehearsal with the Killers in Las Vegas - and it sounded fantastic. Even the management commented because they were interested in the sound. I have been with them for nine years but if I make a suggestion they want the full justification as to why I have changed, and what advantages it would bring. During rehearsals they said the band had never sounded so good and production manager Michael Oberg was delighted with the decision to go forward with this system.'

The general touring setup became typically 14 MLA cabinets and two MLD downfill cabinets per side for the main PA, with a further 12 MLA cabinets on each wing for the side hangs. A cardioid broadside subwoofer array was constructed from 20 ground-stacked MLX enclosures in front of the stage along with four flown MLX infilling along each side (in tandem with some auxiliary Martin Audio W8LC Compacts).

However, after playing the massive Foro Sol in Mexico City, the biggest show was still to come. When 76,000 turned up at Wembley Stadium, it gave the Killers their largest ever headline gig (excluding festivals), eclipsing the Mexico turn-out by around 10,000.

Asked about the benefits of MLA, James immediately replied, 'It's what it does to the phasing. Everywhere you go, every seat sounds exactly the same when you walk around and there are none of the phasing issues typically associated with a conventional line array. As for what you can do with the digital steering, by applying 'hard avoid' settings to roofs, balconies and stage for instance, it's phenomenal.'

Although Capital Sound's most creative Wembley Stadium PA design was arguably the Martin Audio W8L Longbow 'ring' system for Take That's Progress Live tour in 2011 - effectively removing delay mast sightline obstructions in the field by placing a ring of delays around the roof - this was actually the first time Gebhard had worked at the historic 'arched' venue. 'I had only been there for NFL football games previously, and listened to sound through the house system,' he said. 'But although I had never worked there, a gig is a gig at the end of the day - they are all equally important.'

He has been accompanied by a community of different system engineers on this tour - Kenny Kaiser, Toby Donovan, Bjarne "BJ" Hemmingsen - to name but three. 'Everyone coming in and out has been someone I have known and they all instinctively know the curve that I like. But I always walk anyone new through the process.

'Over in the States Kenny [Kaiser] will have two or three presets into the system and different hard avoid and switch alternatives to see how they react. There are often so many different options you can consider.'

Back at Wembley, James Gebhard recalls walking the stadium to check even coverage and then experiencing a kind of sonic 'eureka' moment as he approached the disabled platform - which is where, he believed, absolute perfection was achieved. 'It was so phenomenal I wanted to FOH mixing desk to be there,' he said, 'but it would have been impractical as some of [the signal transmission] was on copper so the distances wouldn't have allowed.

Using Martin Audio's Display 2.1 software all reflections or echo within the bowl were cancelled. 'We used the 'hard avoid' setting to notch out the scoreboard and stage slapback, as some of the band are still on monitors rather than in-ears. It was only when we took the 'hard avoid' off that we realised just how much slapback there was and how much we had done to minimise this.'

In just a year working with the system James Gebhard already has the swagger to describe MLA as 'virtually a plug and play system' such is his confidence.

And as for the support he receives, he is unequivocal in saying, 'It's the guys behind it [that makes this work]. The infrastructure between Martin Audio and Capital makes my life very easy. Working with Capital is always an absolute dream. They give amazing tour support - and that's what you want from a service provider.'

Now he is looking forward to renewing his acquaintance with experienced sound engineer (and now Martin Audio APAC technical support) Chris Pyne when the tour moves out to Australasia and the Far East.

'I know that Japan has gone mad for this system and we have had two service providers from Japan come and visit our shows - so I am pleased we have been able to help push MLA.'