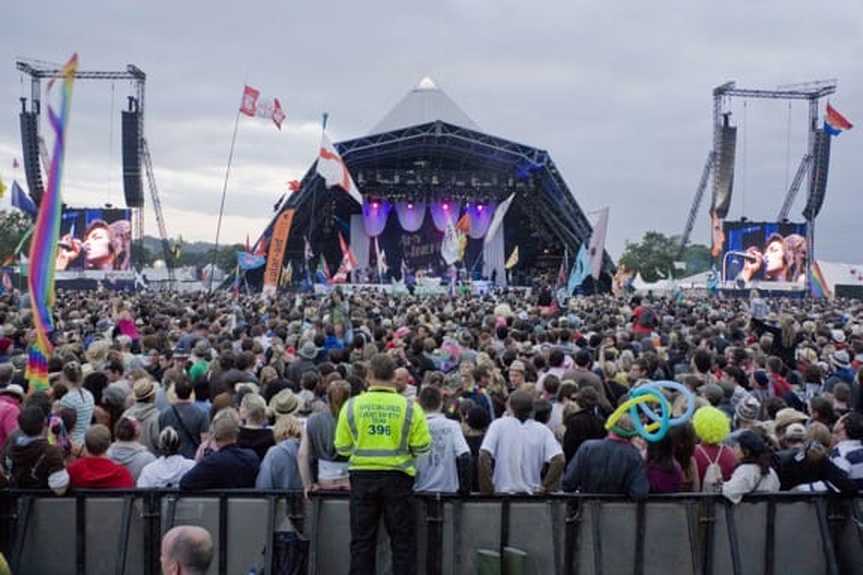 With mostly dry weather and a fantastically eclectic Glastonbury musical line-up including Kings of Leon, The Fratellis, Amy Winehouse, Jay-Z, Goldfrapp, Leonard Cohen and The Verve to savour, there was plenty for audiences to smile about – including an all-new PA system design from Martin Audio that saw RG Jones extend its contribution in 2007 from the stage sound to the main arena PA.

The loudspeaker specialists became involved in March this year, when RG Jones director John Carroll asked if they would be interested in proposing a sound system design for the Pyramid Stage. Convinced that they had the products to meet this challenge Jim Cousins and Jason Baird, together with RG Jones senior project manager, Simon Honywill set about conceiving the design immediately the tender document was received.

System design and simulation
This document centred round a specification written by Chris Beale of CBA Associates which described the coverage patterns and SPL levels required for all the main sound systems used at the festival. As well as specifying figures for the audience areas, it also sought to minimise spillage between the stages. In order to graphically demonstrate the parameters set out in the Martin Audio design proposal, Cousins and Baird made exhaustive use of Martin Audio's proprietary 3D predictive software, Display™.

Architectural or terrain details are entered in 2 or 3D mode and accurate coverage predictions are plotted for selected ISO frequencies or for total (flat, A or C-weighted) SPL. These coverage plots may be per audience plane but sectional views are available where propagation studies are required. Sweep frequency (animated) plots are also possible.

Display further provides horizontal and vertical polar plots of individual arrays plus spot frequency response measurements (like placing a virtual microphone in the venue). These virtual microphones are usually placed in audience areas but may also be used to analyse on-stage, back-stage, adjacent stage or off-site characteristics where required.

Since the Pyramid Stage field is 350m deep and around 200m wide, the obvious choice for the main system was the Martin Audio Longbow. Fifteen W8L Longbows (plus a single W8LD downfill) were used for the left and right arrays, while the sheer width of the field also dictated the same complement to be used for left and right side hangs.

As well as coverage within the site Martin Audio also had to be cautious of any spillage beyond the perimeter. Extensive off-site noise monitoring by Mendip Council and Capita Symonds was designed to ensure that the festival remained within the levels set down in its license. Display's 3D mapping facility enabled Jim Cousins to accurately map the terrain right out to surrounding residential areas and predict the Pyramid Stage Arena's contribution to the festival's noise leakage with considerable confidence (pic 2).

The ability to demonstrate graphically how the system would meet CBA's specification played a dominant part in the design selection process.

In order to cope with the effects of temperature gradients all the flown arrays were zoned so that the top four cabinets could be independently attenuated. This proved to be an essential hedge against the variable temperature and wind gradient effects that bedevil outdoor events. From the mix engineer and Pyramid Stage Arena audience perspective it resulted in consistent arena sound as only those zones in danger of leaking off site due to changes in propagation conditions were being attenuated. For the majority of the festival, there was no need to adjust the system. On occasion the noise monitoring team reported an increase in off site levels due to an up-tilt in propagation conditions. This was dealt with by reducing the drive to the top zones of the system.

Another important feature of Display is its ability to calculate the effect of air absorption depending on temperature, humidity and static pressure. Longbow's very high HF sensitivity and high power handling provides plenty of headroom for air absorption compensation. Display simulates the system's digital controllers, allowing 'what-if' HF compensation, for instance, to be evaluated before implementation.

The constant directivity characteristics of the main inner and outer Longbow cabinets and tilting the arrays downwards made meeting the SPL criteria both in and outside of the field straightforward.

The greater challenge was to design a sub array with similar properties. One of Martin Audio's acoustic engineers, Andy Pardoe - along with Jason Baird - devised a central array of 54 x WS218X 2 x 18' subs, a third of which were facing backwards. The whole array was mounted along the stage apron and driven in a cardioid configuration in order to control the levels on stage as well as spillage to the other stages.

However, a long, straight array of subs has a laser beam-like dispersion pattern. A technique had to be found to widen this beam to cover the whole width of the field and to match the coverage of the main and side hang system.

This required the use of sophisticated software-based modelling techniques for sub arrays, currently being developed by Martin Audio (pic 3). This allowed Pardoe to demonstrate that manipulating the drive signal along the sub array, from its centre to the ends, could broaden out the beam to exactly the right coverage pattern. A significant benefit of this single cluster approach was that the 'power alley' created by widely spaced left/right sub arrays was totally absent. The low end was remarkably smooth over the whole of the field. What was equally impressive was how the system maintained this controlled coverage character right to the back.

The delay system comprised three arrays of 16 x W8LC, tilted downwards to sharply cut off at the back of the field. Each array was augmented by eight WLX subs, again driven in a somewhat unusual cardioid configuration, in order to yield excellent forward projection required without rear leakage.

The W8VDQ compact, three-way system, which combines line array and differential dispersion technologies, made its festival debut when two were used for infill behind the mix position. They provided plenty of SPL, yet their diminutive size did not obstruct the video screen directly above them.

Implementation
Turning a sophisticated system design into a successfully executed job requires commitment, cooperation and a willingness to work around the last-minute changes that are inevitable with a project of this size. CBA Associates' and RG Jones' experience of previous Glastonbury Festivals was complemented by Capital Sound Hire's extensive touring experience with Longbow systems (which were provided for Glastonbury from their own fleet). Finally, Martin Audio's detailed system design and prediction facilities combined to provide a system that met spec in an easily controllable manner.

In fact RG Jones and Capital Sound's well documented ID'd drive systems, plus their adherence to standard Martin Audio user configurations and gain structures, ensured seamless system integration. Mark Edwards and the team from RG Jones plus Ian Colville from Capital Sound provided combined rigging and systems expertise that was second to none.

Summing up, Simon Honywill of RG Jones said, 'Performance was everything it needed to be for a festival of this kind and the design conceived by the guys at Martin Audio proved exemplary.'

Martin Audio sales director Rob Lingfield, added, 'This collaboration was a triumph for the Martin Audio rental network. As much as the combined inventories, it was the pooling of these companies' expertise that was the foundation of the festival's success.'

And Chris Beale agreed: 'Melvin Benn [festival production director] paid very close attention to the system and walked the arena with us, and he's extremely satisfied. We've got a great result, because of the amount of effort that everyone's put in - the thinking and co-operation that's gone on between everyone involved has been really good. And following the weekend, the local authority have declared themselves very happy too, which is great news for the festival.'