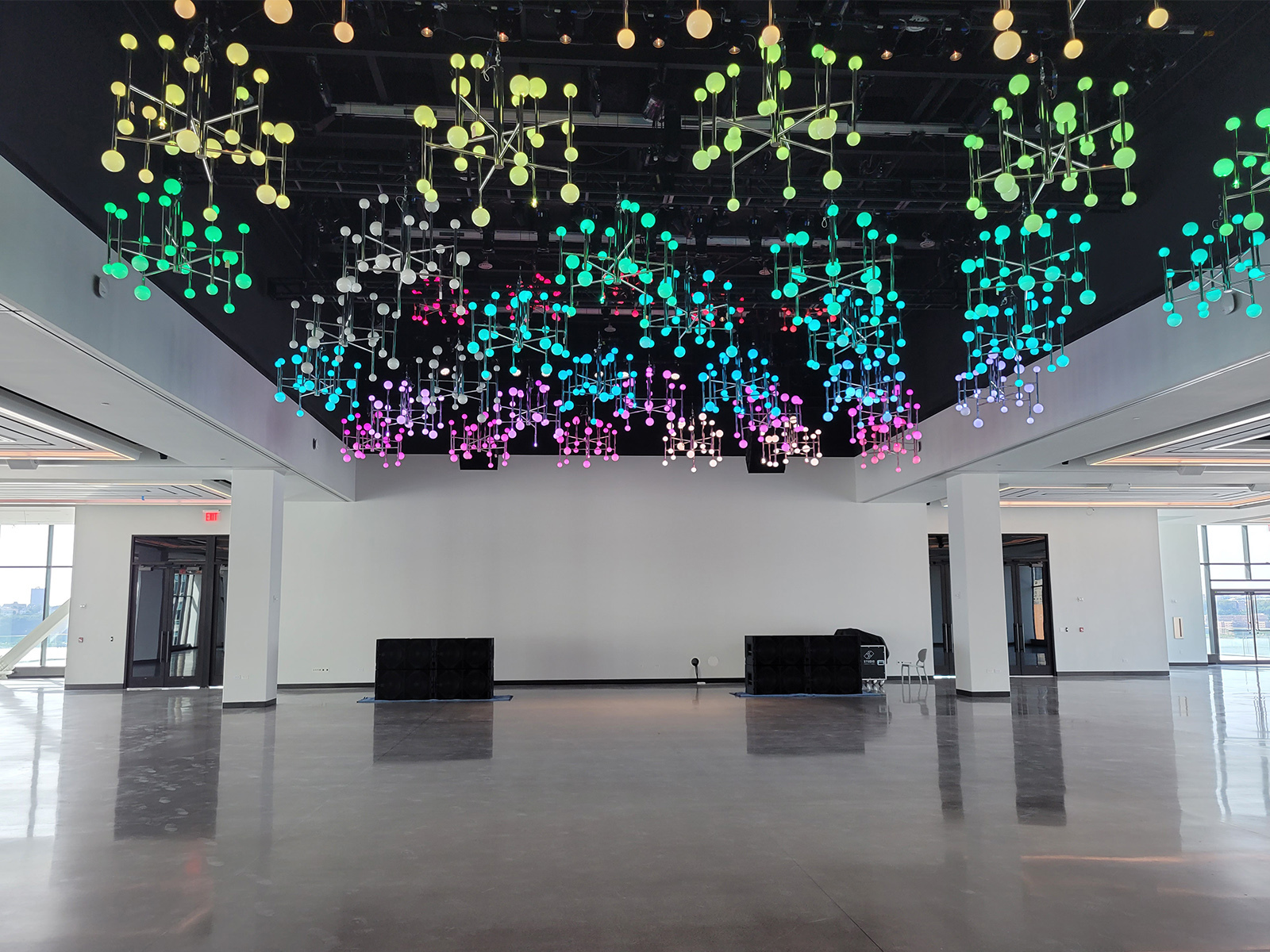 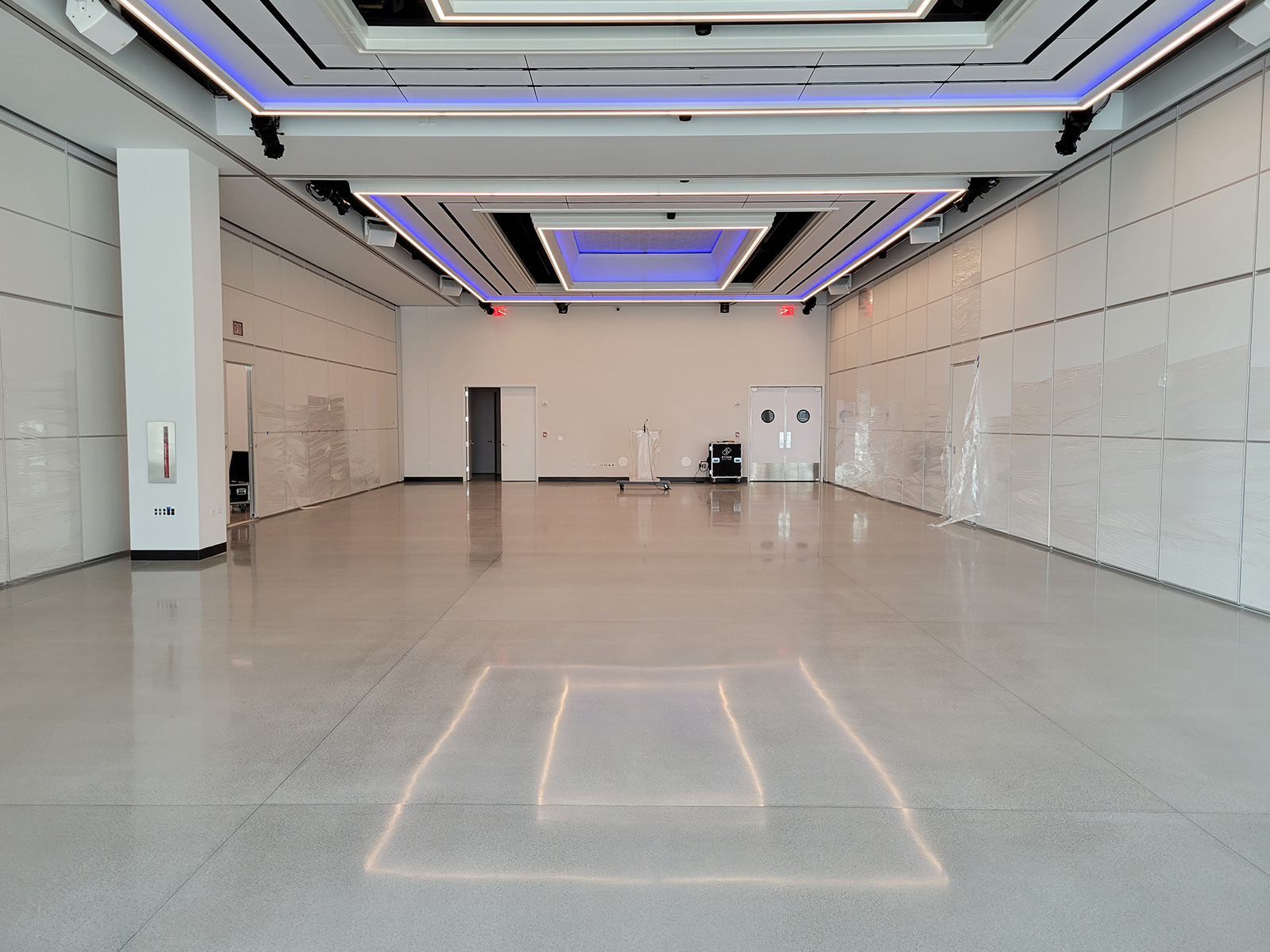 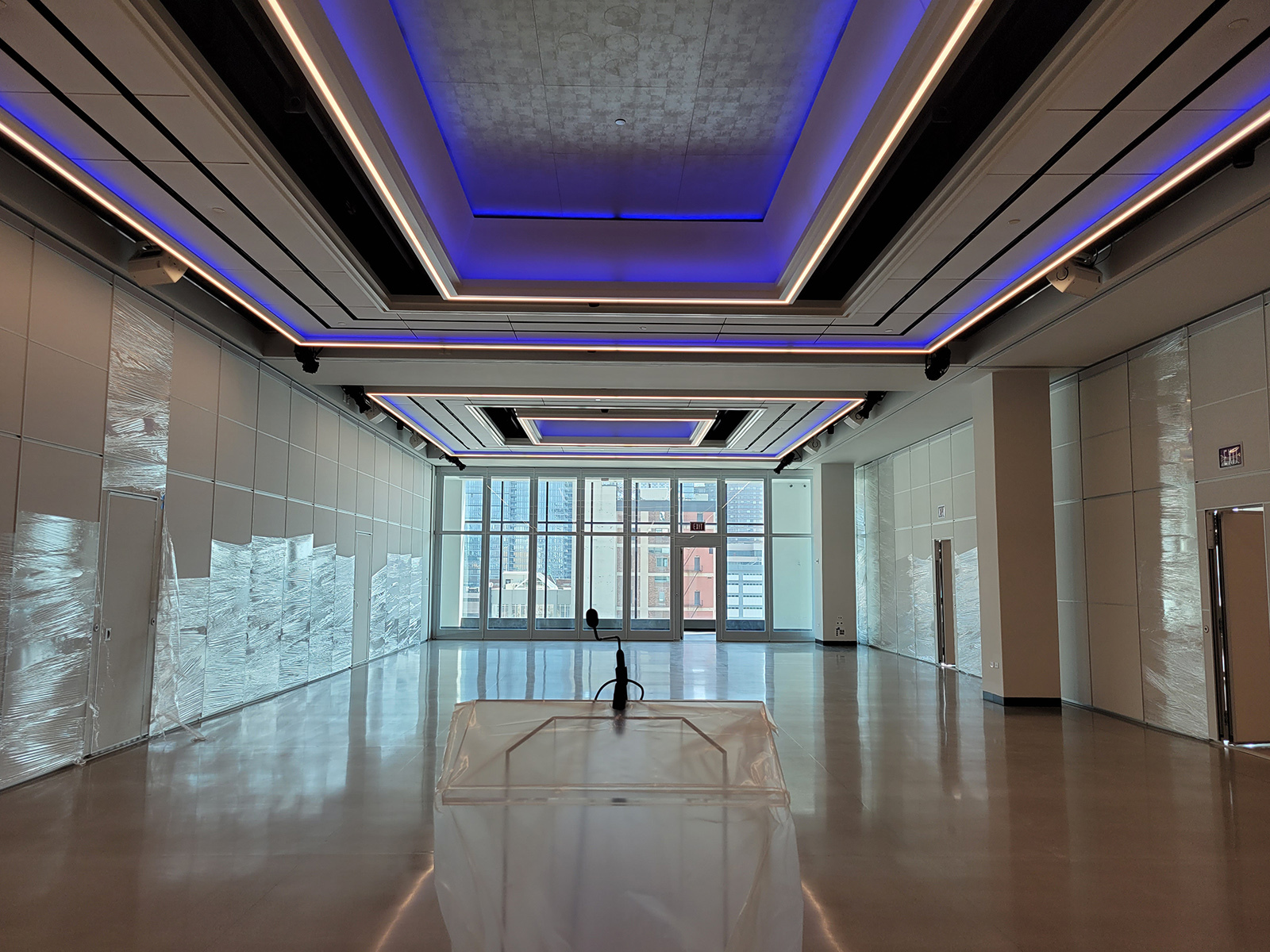 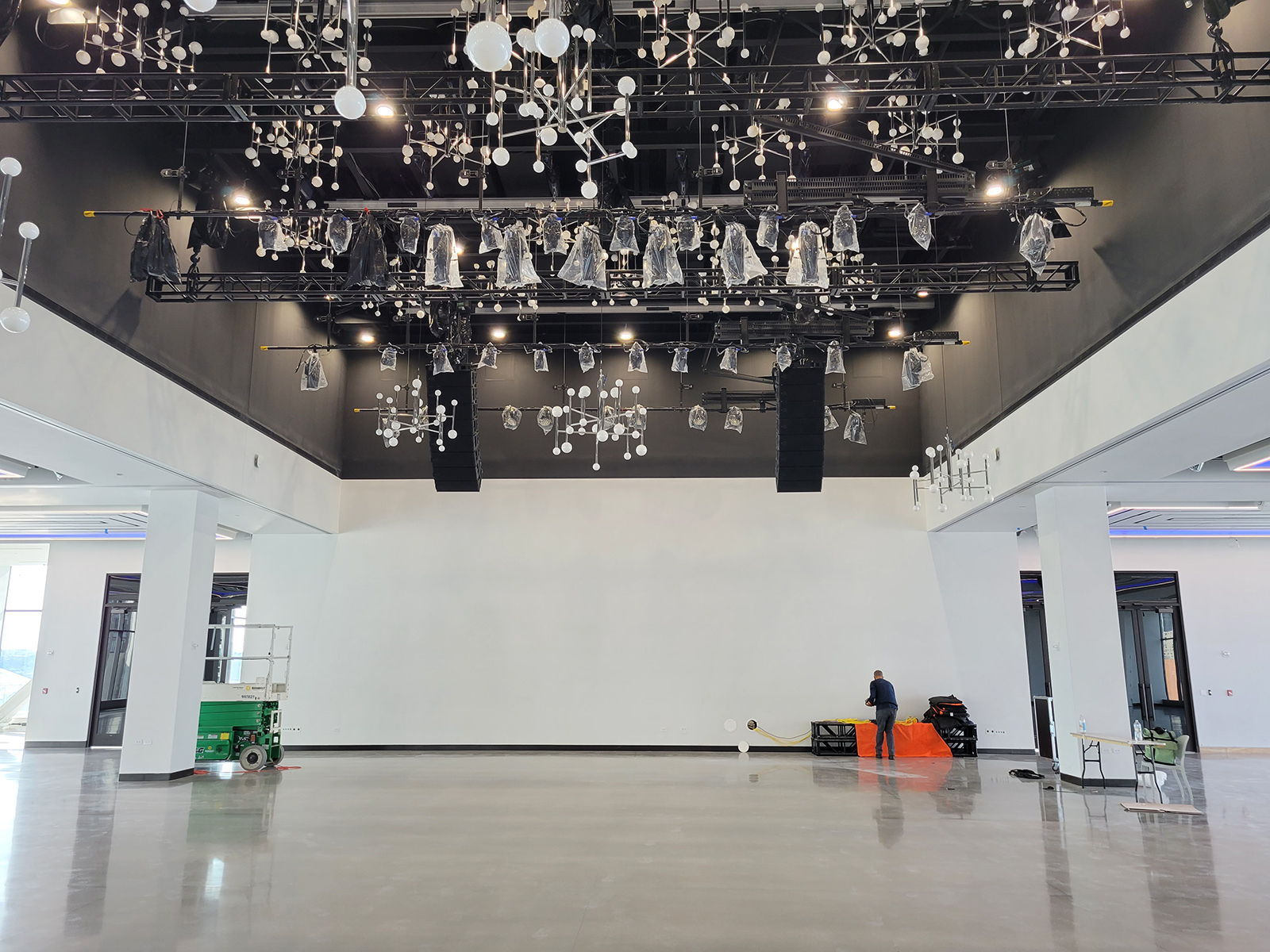 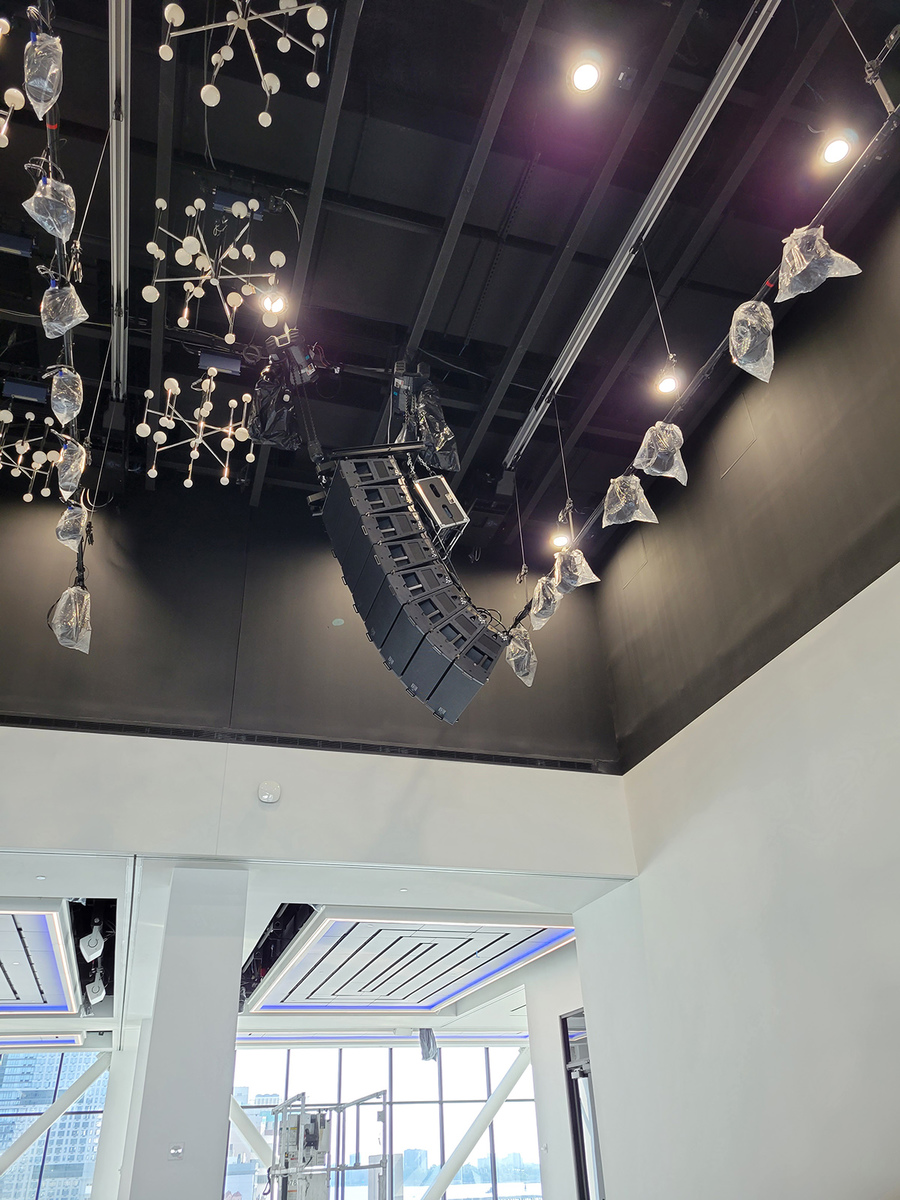 MLA AND CDD-LIVE 8 SENT TO THE GLASSHOUSE

Offering breath-taking 360° views over the Hudson River and Manhattan Skyline, The Glasshouse is a new multi-function, interconnectable event space in New York City.

The work went out to tender, and the successful bidder was Martin Audio partner, Audible Difference (ADI). “We were offered the contract based on our design, and the fact that Martin Audio system offered a robust and adaptable Dante platform,” believes ADI principal, Erich Bechtel.

Consequently, the stage area pop-up space, taking advantage of the extra ceiling height on the 7th floor, comprises two hangs of eight MLA Compact, while LF extension is provided by eight DSX-F subs, four per side, which can be deployed as necessary.

Bechtel’s colleague, Ian Ruben-Schnirman, ADI’s Director of Technical Services, was responsible for overseeing the fit-out of this former warehouse building. The Glasshouse itself occupies the 5th floor and the 6th (the event space, VIP rooms and kitchen), which are entirely new additions to the building.

He noted that the high ceilings, concrete base construction and heavily glazed superstructure were likely to generate reflections. To deliver an adaptable space suitable for private hire, live events, party planners, weddings and so on ADI needed to create an environment which could be reconfigured “in a virtually infinite number of ways, with recallable presets, enabling them to change events faster.” To achieve this, ADI also knew that a powered system would offer them greater flexibility.

Justifying their decision to adopt the MLA platform, Ian Ruben-Schnirman said, “MLA makes sense here because of the optimisation potential; we could avoid hitting glass, and at the same time could steer the sound and achieve total rear rejection.” Aside from mitigating the glass and concrete surfaces, it would also maintain intelligibility and tour grade audio quality, while being sufficiently flexible to be deployed in several different ways as the room changed shape.

He was also hugely impressed by MLA’s consistent coverage. “This was especially important in a space like this which is essentially a large concrete box. Wherever the sound is arrayed, you hear no difference whatsoever. I don’t think any other system would have worked.”

In addition, “The ability to control the audio within the wider space with a distributed audio system was paramount, but with ceiling speakers they wouldn’t have been able to do what they wanted to do. So we moved them up to CDD-LIVE 8 and ran everything over Dante,” he said. “By keeping the sound digital we managed to avoid thousands of feet of cable.”

With the spec agreed, via an AC line they were able to test every speaker quickly—before the main power cables were in. “One of the features [of CDD-LIVE 8] is the large LED indicator light on the front of the cabinet under the grille. When you have 63 boxes up in the air you can turn these lights on, and it makes trouble shooting much easier.”

The 63 white CDD-LIVE 8 mounted in the ceiling as a distributed system are complemented by a further 12 black CDD-LIVE 8 variously detailed for front fill duties, deployment on the terraces and as compact stage monitors. Four SXP118 subwoofers provide LF extension.

Another vital component was the control element via the Dante solution. ADI turned to Martin Audio’s proprietary DX4.0 network system controller, which handles most of the tuning and U-Hub to feed digital audio to the MLA array via a single cable. “This enables the hangs to remain isolated when we move equipment around the room, allowing for the variability of the space.” Furman power conditioning and bespoke rack supply—offering cable routing panels with integrated D-ring—kept the installation neat and allowed all four racks housing the DX4.0 and U-Hub to be flown. “This was important as it offers maximum flexibility as the rooms change.” Room combining is via a third-party device.

With the intervention of COVID, the contract was drawn out over 18 months, eventually only completing this September. The integrators were supported by Martin Audio’s Product Support Engineer, Joe Lima. “Joe was invaluable,” said Ruben-Schnirman. “He looked over the design remotely, and he and I did the system teching.”

Another key member of Martin Audio’s US team was North-eastern Regional Sales Manager, Martha Callaghan, who campaigned energetically to help secure the contract and diligently support it every step of the way.

Both the ADI executives are delighted with the outcome and the fact that their decision to back a CDD-LIVE 8/MLA combination has been completely vindicated. Concludes Ian Ruben-Schnirman, “The first time I got my ears on CDD was in Martin Audio’s demo room at InfoComm2015 and we’ve been using CDD-LIVE 8 for our rentals and shows ever since.”