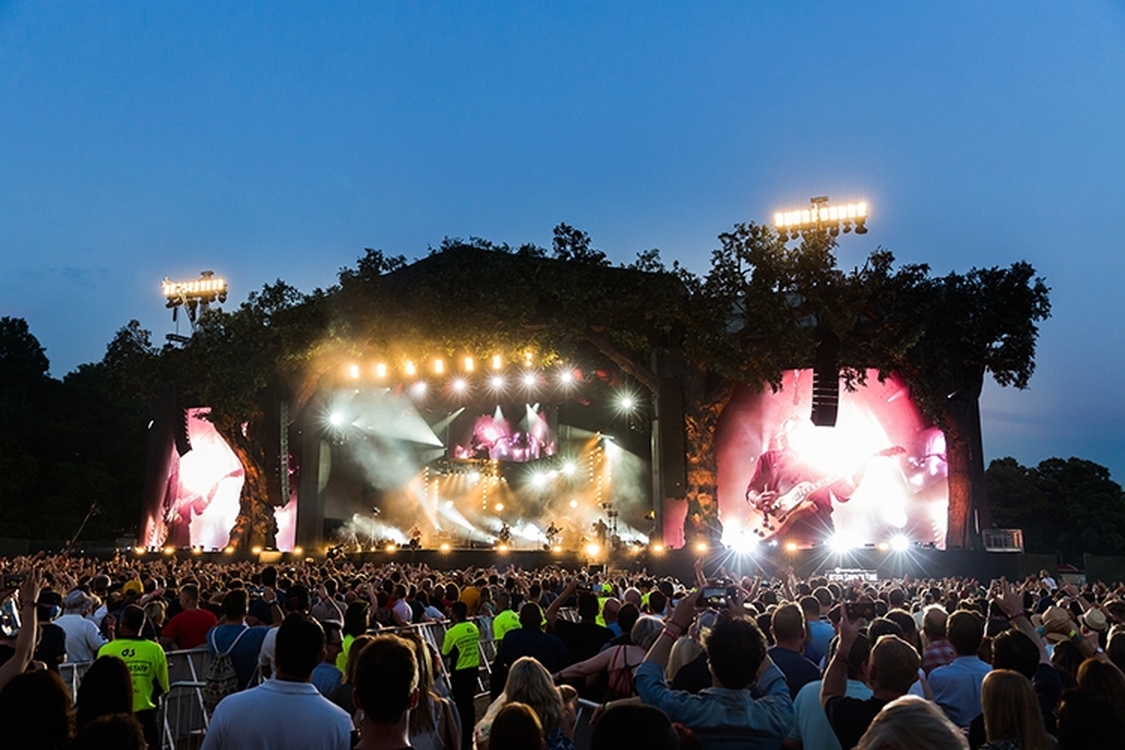 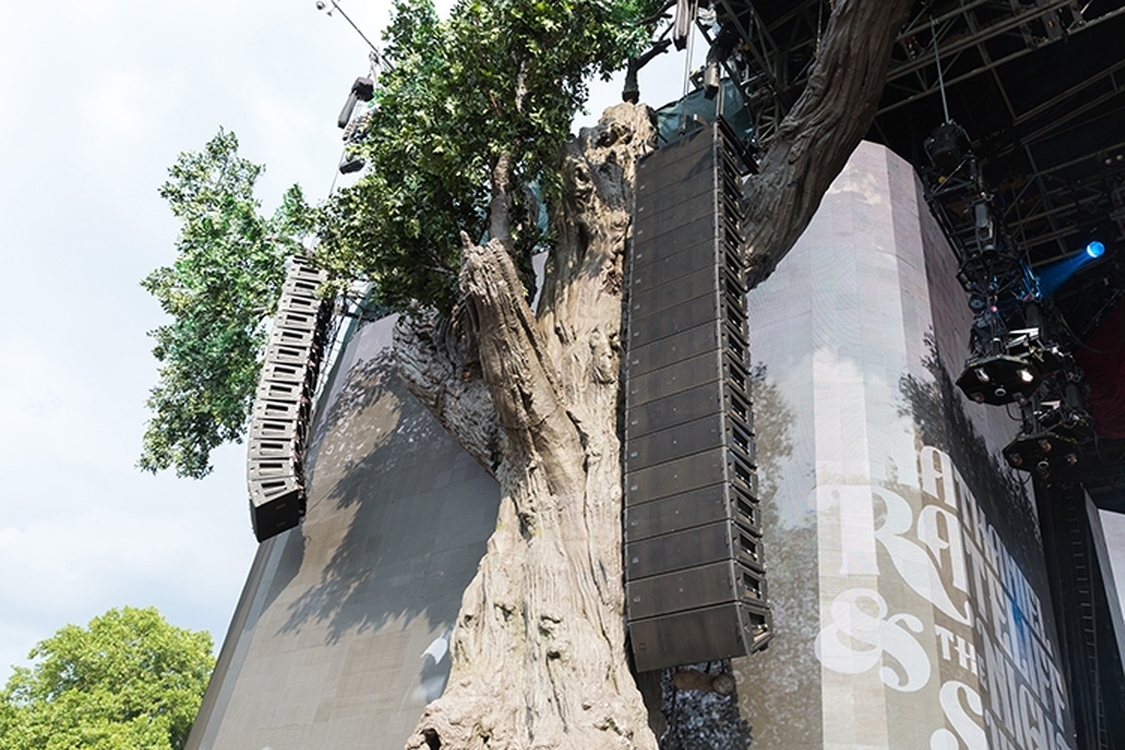 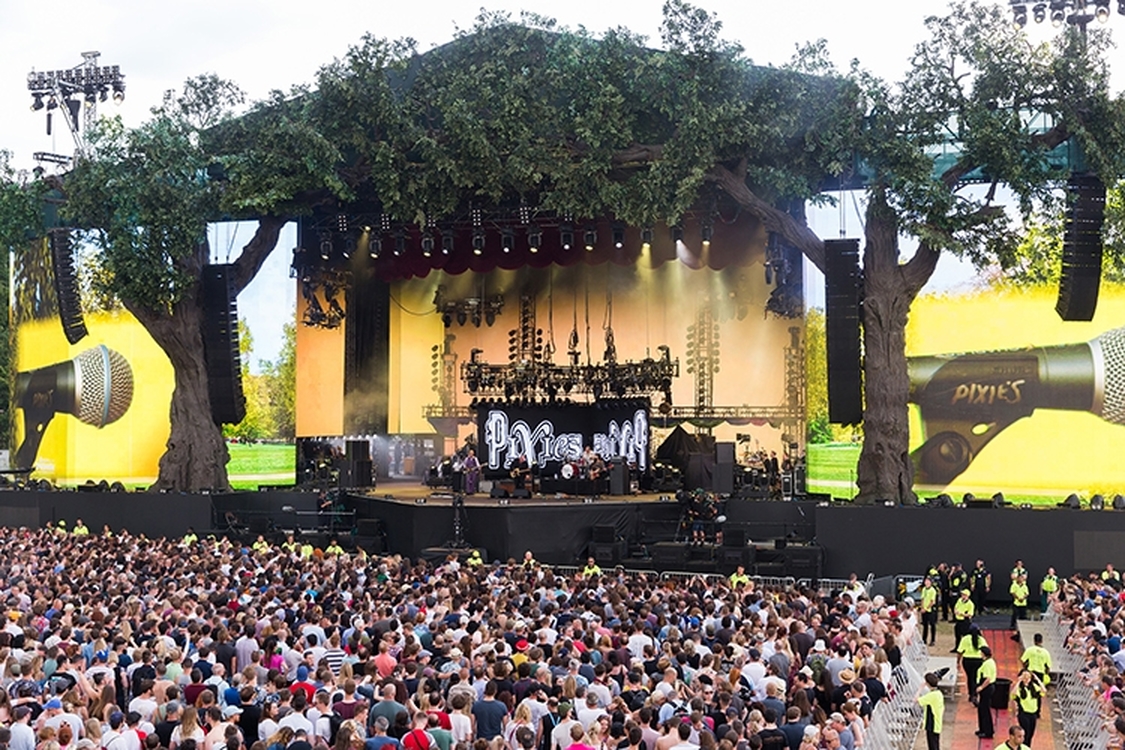 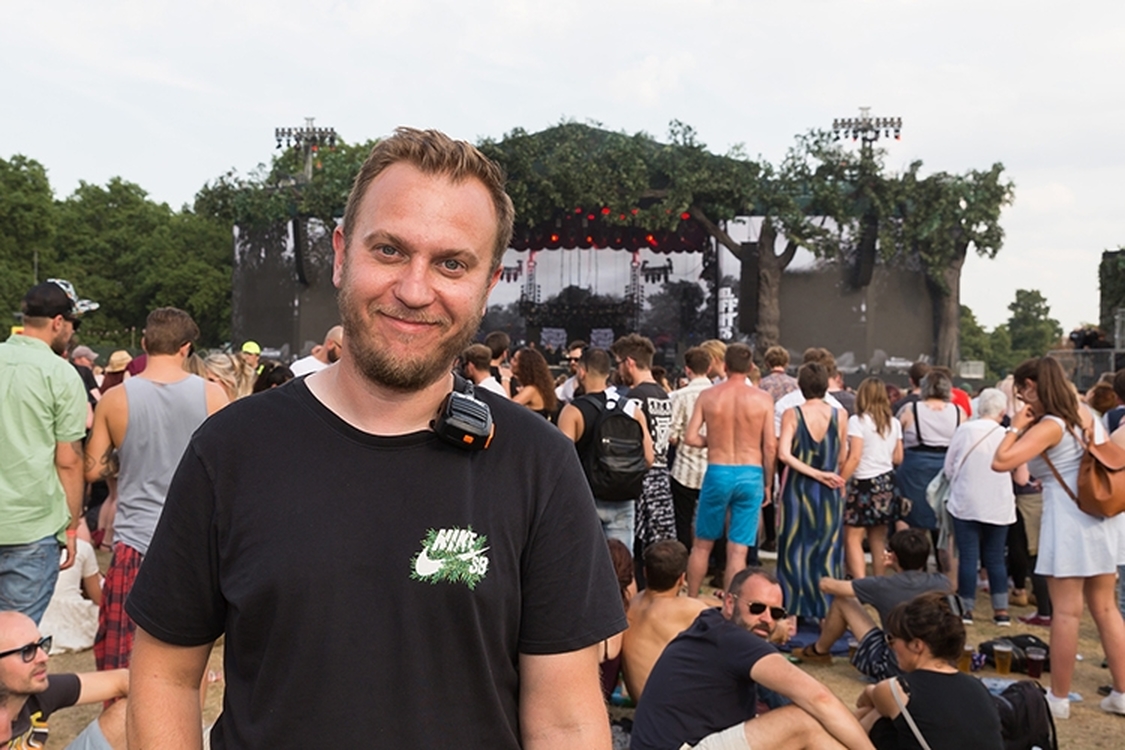 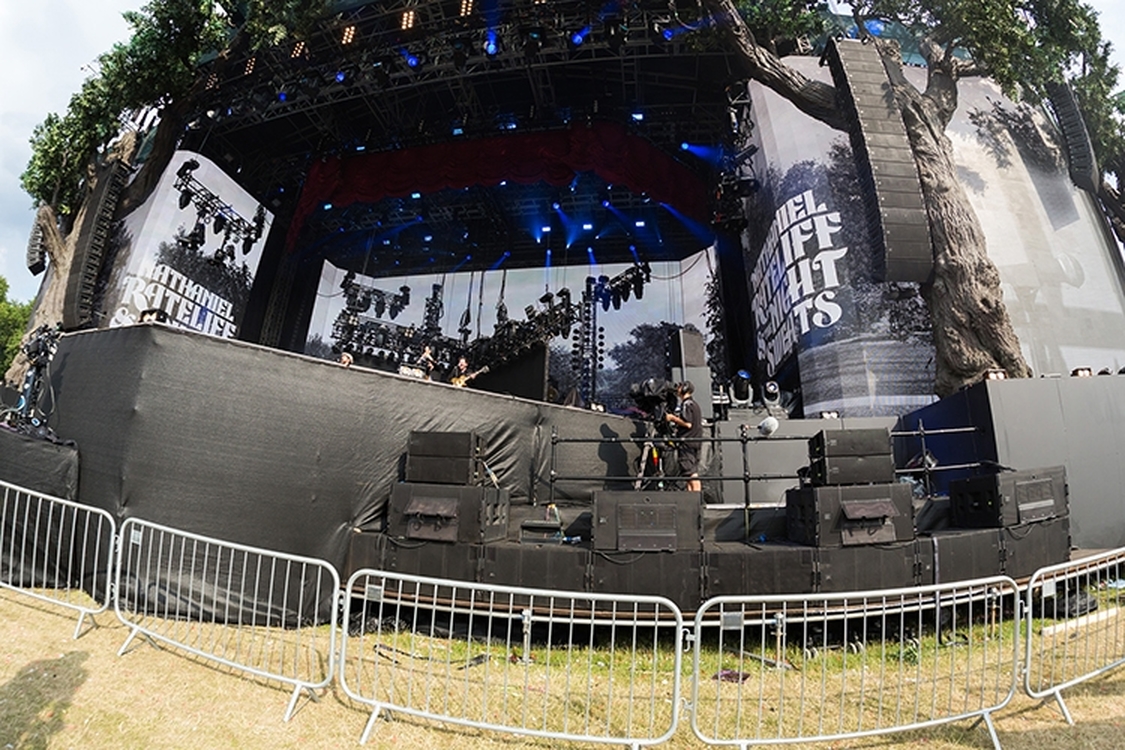 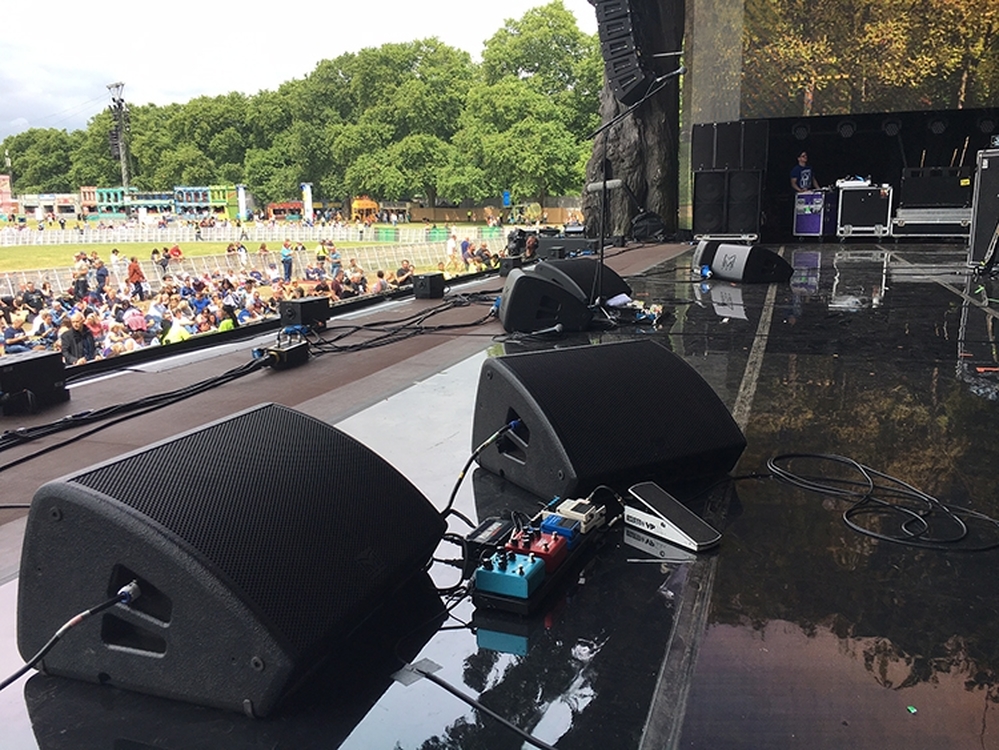 In its quest to establish Barclaycard Presents British Summer Time Hyde Park Festival (BST) as the best festival in the world, AEG Live Event Director, Jim King, is celebrating the fifth consecutive year at the site by announcing a two year extension to the contract with Martin Audio rental partners Capital Sound.

A site that was historically thought to be unworkable because of the way punitive offsite sound thresholds had impacted on sound levels in the bowl, has now been transformed. This is due to the expertise of Capital Sound, and a combination of Martin Audio's flagship MLA PA and the constantly evolving DISPLAY™ optimisation software.

Capital Operations & Development Director, Paul Timmins, explains, 'Jim expects to see constant improvements in the service technology and that every component deployed is state of the art. AEG realise that MLA will remain the best tool for the job largely because the software updates are so fast moving - meaning that year on year we can continue to move the festival forward. But there are further improvements we can make elsewhere to equipment.'

To that end Capital this year implemented some significant upgrades on the main Great Oak Stage.

1.     The rental company introduced 24 of the new XE500 floor monitors, which saw their debut at last month's Glastonbury Festival (with RG Jones). These feature unique Coaxial Differential Dispersion technology with a patent pending third static waveguide. This is designed to deliver perfect monitor sound at very high SPL output with a defined coverage pattern that allows the artist freedom of movement, while reducing overlap with adjacent monitors.

Driven by Martin Audio's new iKON iK42 advanced 4-channel power amplifier, combining very high power density with superb audio performance, state-of-the-art DSP and network control, the XE monitors were used by bands performing at the event, including Blondie and Starsailor, as well as some supporting mixes for The Killers. 'We saw these monitors at the development stage - they are slightly smaller and lighter than their predecessors, and the indications are very positive,' states Timmins.

3.     Elsewhere, they replaced old Martin Audio W2 technology in the VIP Pavilion with 14 x Martin Audio XD12's in landscape mode to make the coverage pattern more uniform (without the need to rotate the 80° x 50° horn). 'These replace the 16 x W2, which were previously hung in portrait mode. It is a more efficient solution and demonstrates our willingness to embrace new technology using the new flying hardware,' he continues.

'In fact with one exception where we have used WS218X subs, every Martin Audio loudspeaker deployed at this Festival is current.'

For the rest of the main Great Oak Stage set up the PA was consistent with last year and comprised two hangs of 16 x MLA and 1 x MLD Downfill per side, with 13 x MLA and an MLD Downfill for the sidehangs. The sub array consisted of 21 x MLX in a broadside cardioid array, with a further 11 enclosures back facing.

Certainly the 55,000 people who attended the fourth sell-out show, headlined by Kings of Leon, had no complaints about the sound coverage. The Nashville rock band opened with Over from their most recent album Walls before taking it back to their early days with Slow Night, So Long. Crowds screamed along to more recent hit Eyes on You and the iconic Mary before closing with their greatest hit Sex On Fire and one of their newest hits Waste a Moment.

Earlier, lead vocalist Caleb Followill had exclaimed, 'I don't have to work tomorrow, so I'm going to have a lot of fun tonight. I hope you guys join us!' And so they did, just as they had done earlier for a lively performance on the Great Oak Stage by evergreen band, The Pixies (to whom Kings of Leon paid tribute). And the sound quality throughout was pristine. As one person observed, 'I had only heard the Pixies on record previously and this sound exactly reproduced that.'

One ringing endorsement of the exemplary sound control across the site is that for the first time no-one raised the question of sound levels. 'It's simply not an issue anymore,' Paul Timmins reports. 'In fact Green Day's sound engineer was told he could turn the sound level up and still remain comfortably within the offsite sound threshold. And as for The Killers on the second Saturday it was everything a rock gig should be.'

Another key change this year was the new optimisations created by the event's long-serving system tech, Toby Donovan, to keep the sound contained independently within the Great Oak and Barclaycard stages. Because the venue now gets a lot midweek usage, as far as sound pollution goes the site is heavily regulated and no audible offsite sound is permitted. This is particularly challenging when the crowds are so much smaller and it required some clever programming of the field delays by the system tech to pull the sound in. Donovan praised the additional lower frequency control of the new DISPLAY 2.2 software, using it on a grand scale for the first time.

Paul Timmins noted that MLA's easy reconfigurability came into its own midweek - particularly for back-to-back presentations like Cinema, live from Wimbledon coverage and a replay of last year's successful Carole King Tapestry concert all requiring significantly different soundscapes. Both he and Toby Donovan report general satisfaction with the coverage and the levels achieved.

Martin Audio systems were also provided for several other stages. On the Barclaycard Stage (Stage 2), 8 x MLA Compacts were flown on each side with 14 x WS218X subs in a spaced and recessed cardioid configuration, with four Martin Audio DD12 providing front fill sound, while two MLA Compacts were provided as outfills on Stage Left.

Bacardi Bar also featured a distributed system including three Martin Audio DD12, two DD6 and a PSX subwoofer. Since the live element has now disappeared this was used largely for playback.

A new feature was the Moretti Bar where an MLA Mini system (four elements plus sub each side) were complemented by four DD12 as DJ fills on a distributed system. These were repurposed as outfills when a live band was introduced.