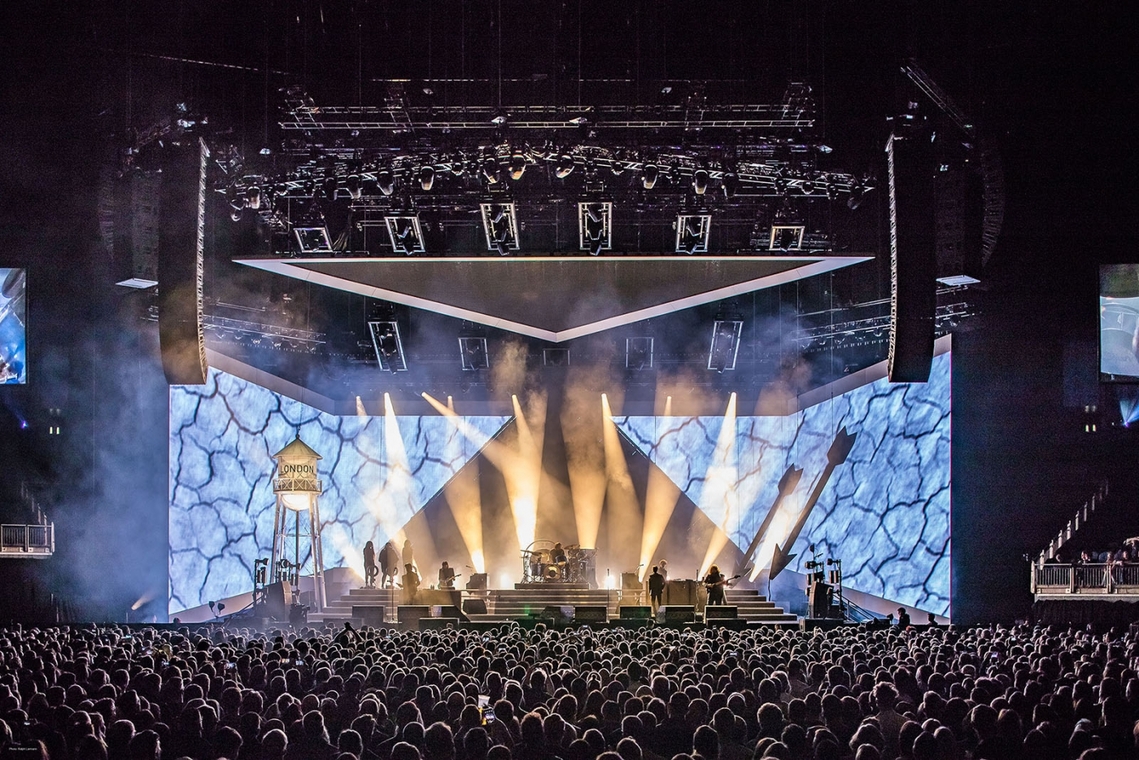 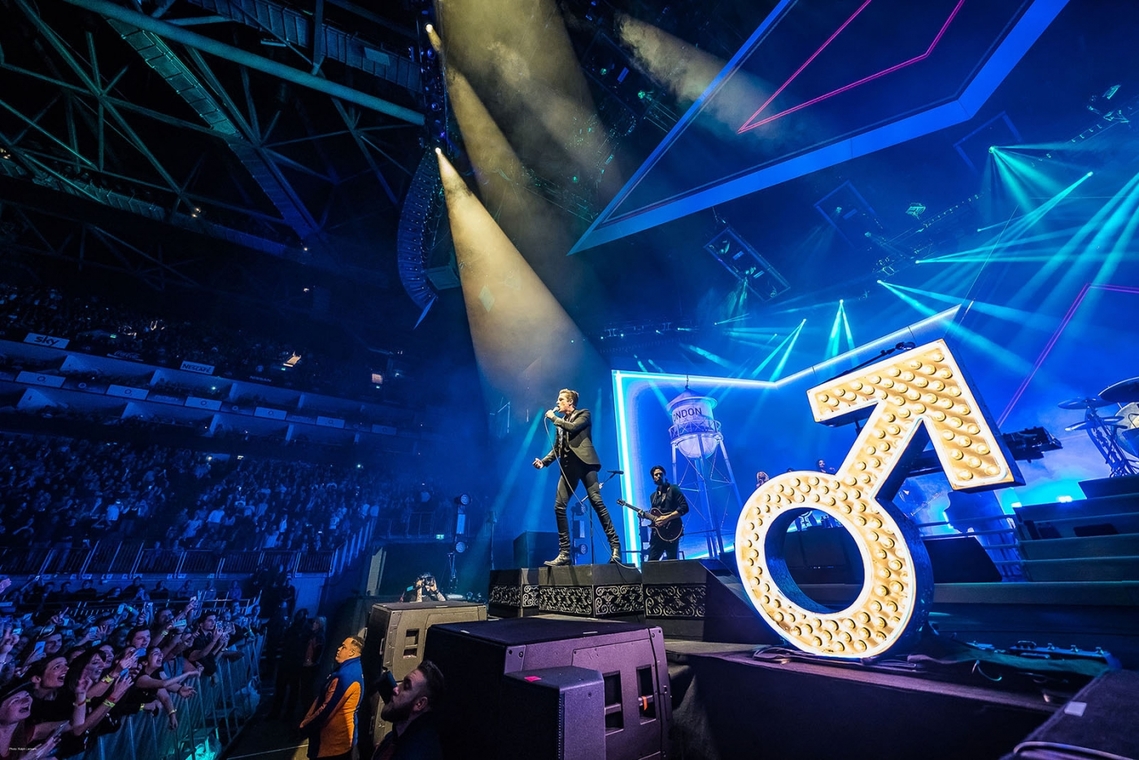 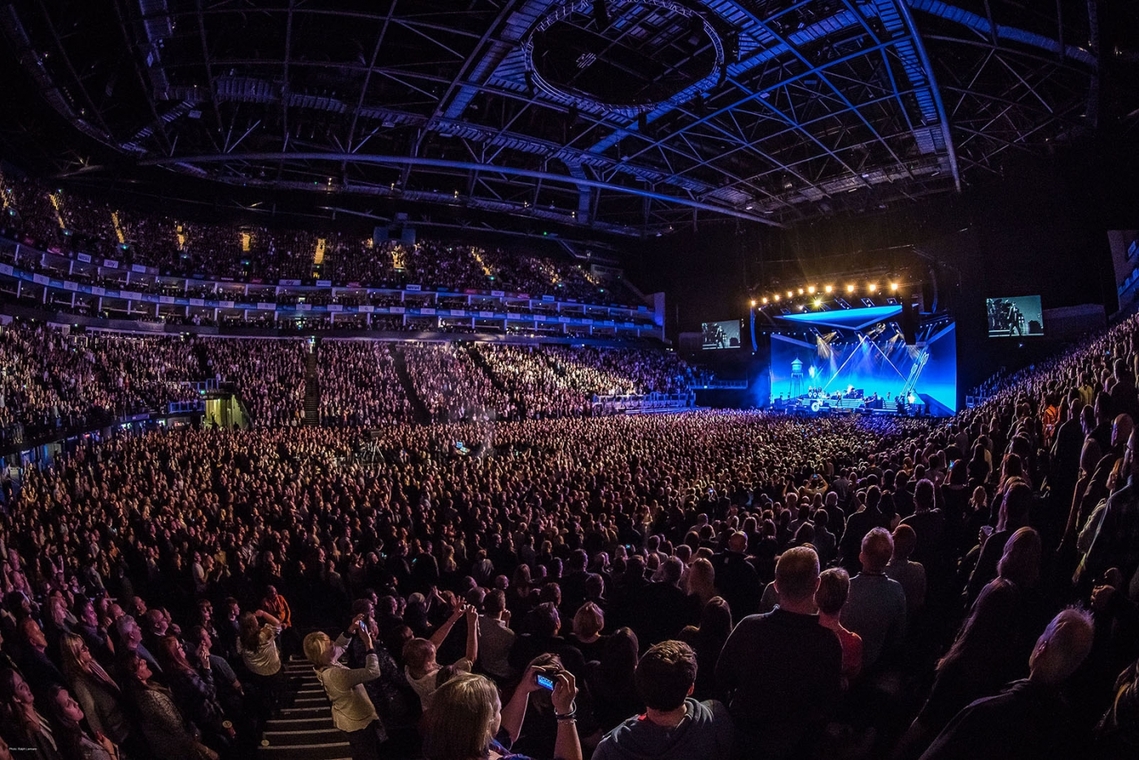 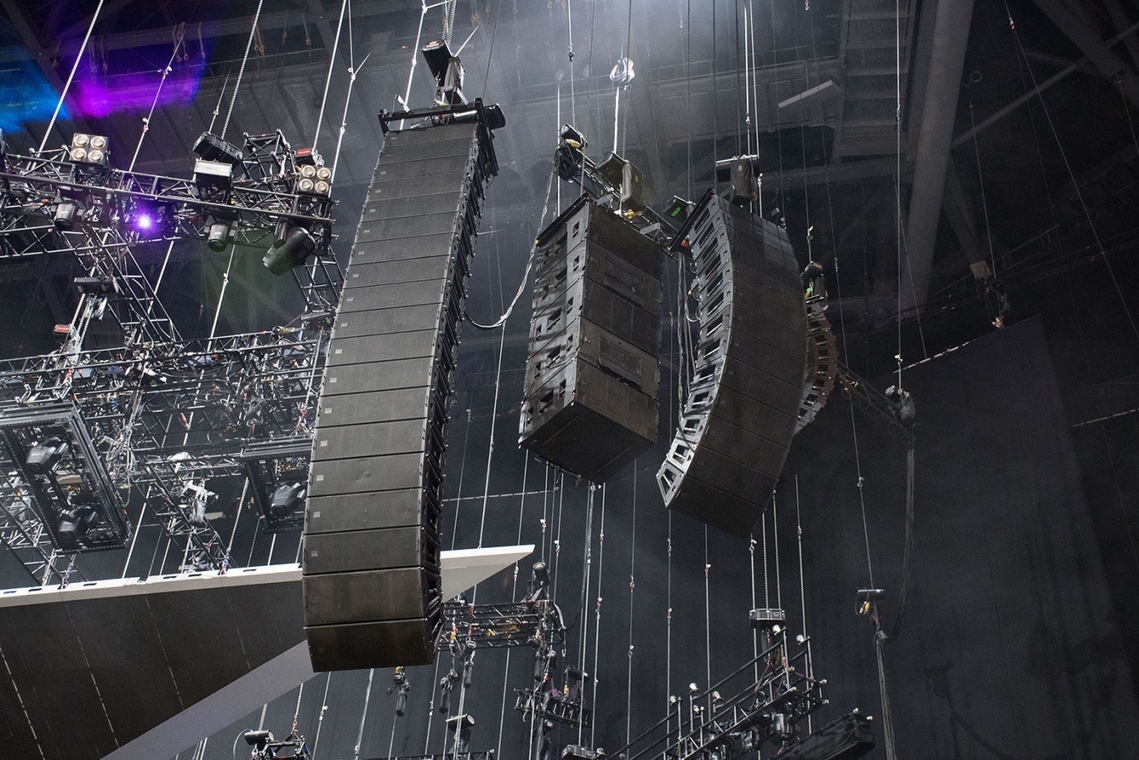 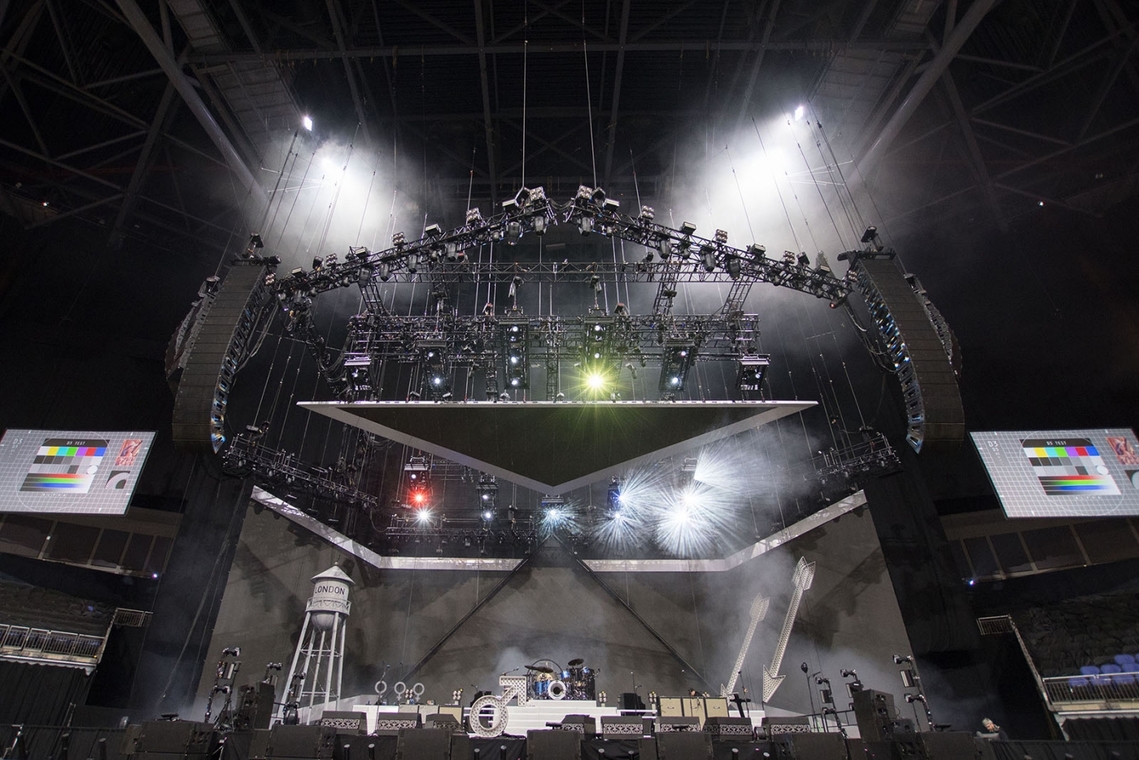 Mixing at FOH was Kenny Kaiser, and alongside him experienced system tech Toby Donovan, arguably one of the most experienced MLA system techs in the world.

Promoting their fifth studio albumWonderful Wonderful, the band were playing through a familiar Martin Audio set-up comprising main hangs of 17 x MLA elements plus 2 x MLD Downfills per side, with side hangs consisting of 12 x MLA plus 1 x MLD Downfill per side. Also deployed were secondary side hangs of 10 x MLA Compact enclosures on each flank. This was to ensure that while the main side hangs provided coverage up to around 8ft-12ft upstage of the downstage edge, the secondary hangs would infill the complete side stage seats with deluxe audio coverage.

As for the low frequencies, five MLX subwoofers were flown on each side at a 45° angle between the main and side hangs, while a further 21 x MLX were set across the front, in spaced 7 x 3 array ground stacks, with the bottom enclosure reversed. Flying the subs at 45° ensured good low-end reinforcement round the sides and enabled Toby Donovan to keep the electronic dispersion of the sub array on the ground fairly narrow and the delay time short, thereby keeping the sound punchy.

Through his work with American West Coast-based Delicate Productions, a long-term Martin Audio partner, Kenny Kaiser was entirely familiar with MLA, having also worked with earlier systems such as W8L Longbow.

'I first experienced MLA when I was tech'ing for Selena Gomez, her first tour of the States. We had MLA out and I really loved it. I then toured with a bunch of other people and it's been awesome ever since.'

In fact the Killers started using MLA on the Battle Born tour back in the days when Kenny's predecessor, James Gebhard was mixing FOH and so for this tour it made perfect sense to continue with the system.

On this tour, says Kenny, 'my main focus is clarity - and I mix tonality second. When we've had some challenges like at Glasgow Hydro or at Brixton academy, using 'Hard avoid' [in DISPLAY software] just cleaned everything up.'

Kenny Kaiser also instantly noticed the coverage power of the system. 'This box really throws - it's insane. You can do any arena, you just put the system up and go.

'I've been sitting at like 108dB - I had a peak at 112dB last night [at O2 Arena] so there's tons of power in this thing and I'm barely tickling the green meters.

'Over in Dublin the producer of the actual album [Jacknife Lee] came out and said it was one of the better shows he heard in there; he actually walked the room and it was great coverage everywhere.'

Finally, Kenny was full of praise for the Capital Sound team. 'They've been absolutely awesome, the crew has been fantastic, super professional but at the same time everyone gets to share a joke.'

There was a reciprocal praise from his 'wingman' Toby Donovan, another Killers stalwart. 'I just love working on the Killers tour, I've done it for quite a few years now in various positions like the audio crew chief, front of house tech at festivals, and as a systems engineer as I am now,' said Donovan. 'Kenny is just a great front of house engineer, his mix has such impact so it's like a real pleasure to work with him because the results I think are really superb.'

He says that all he is striving for is consistency. 'Kenny's mix is rock-solid, so we just want that to translate into every venue and sound as similar as possible in every seat, which is challenging; but now we've got a PA system that helps us achieve that.'

He attributes this to the fact that Martin Audio are frequently improving the optimisation software. . 'We're using the latest version of the DISPLAY software to generate the presets which somewhat dictates the coverage the PA achieves through the venue - as well as other factors like SPL profile or if you want to achieve any particular avoidance areas of balcony front, or make the stage a bit quieter. We're just allocating most of the DSP in order to achieve a decent smooth SPL profile through the venue.'

Although both he and Kenny Kaiser have got independent wireless analysers running SMAART, MLA is now such a known quantity that it obviates the need to check the response at every possible point of the venue. 'I just know that the performance that is shown in the prediction software really translates well into the real world,' says the system tech.

And the final word from Kenny Kaiser: 'The sound is really thumping, I think everyone in the band is super happy - when they come out front and listen they're pleased.'