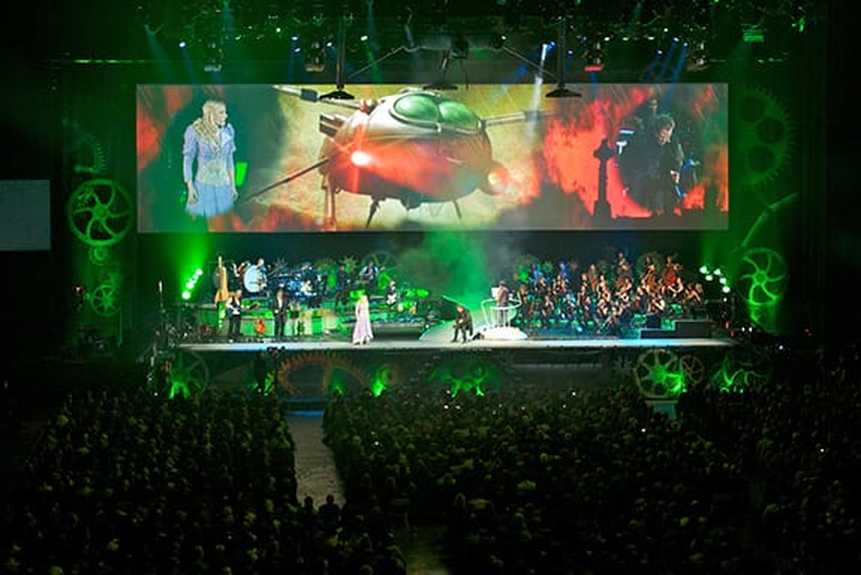 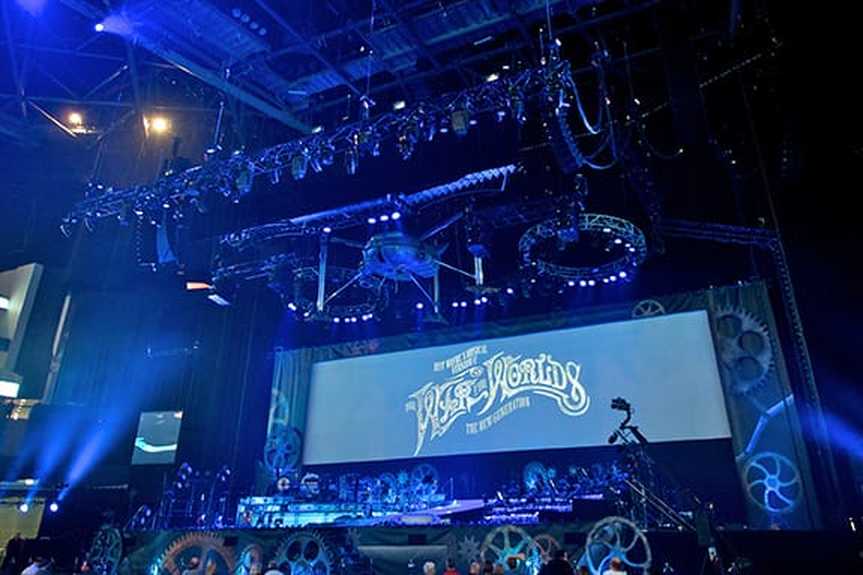 Fuelled by a significant upgrade to the original 1978 concept, Jeff Wayne's Musical Version of The War of The Worlds, The New Generation as it is now known, has been playing to packed arenas throughout the UK and Northern Europe this winter.

The production sees Liam Neeson take over the Richard Burton role as the journalist and Kaiser Chiefs' Ricky Wilson as the Artilleryman. There were to be other changes as Marti Pellow was added to the cast as the Voice of Humanity and Jason Donovan returned - this time as Parson Nathaniel, with Kerry Ellis playing Beth, his wife. Later Pellow switched roles allowing Jettblack's lead singer and guitarist Will Stapleton to take his place as the Voice of Humanity, singing 'Thunderchild' (originally played by Chris Thompson), and Pellow undertook the role of 'The Sung Thoughts of the Journalist', previously sung by 1978 original Justin Hayward.

Simon Honywill believes this to be the strongest cast yet - and certainly the most elaborate production. The centrepiece, he says has been the major changes to the CGI and the outstanding performance of the MLA in the hands of one of its most experienced practitioners.

While Liam Neeson is seen in 3D holography as the story's narrator he now appears in three guises: the first full body hologram seen on stage interacting with live actors, then as an 11-ft high holographic head and shoulders hovering above the stage, and finally within the 2-hour CGI film projected onto an incredible 100ft wide 'animation wall'. To see him interacting with the live performers (via the side screen), including passing objects between hologram and reality, is one of the highlights.

'Whichever way you look at it, the production is on an epic scale,' says the FOH engineer, now on his third WOTW tour.

Although the sound team has an implicit knowledge of the acoustic characteristics of each venue visited, Edwards had no intention of falling back on saved optimisations within the MLA control environment.

London's O2 Arena had been a case in point. 'I remember being very impressed with the clarity of the system at the back of the arena … around 100m from the array and 30m above the arena floor. The house delays were unable to add anything, not even any sparkle to the top end of the system - and in the end I only used them at very low levels to add a little low mid warmth. For 16 boxes a side I think that is very impressive!'

At Cardiff Motorpoint Arena inspiration struck Edwards. Using the unique abilities of the MLA system he created a new optimisation to reduce the reflections caused by the angled corporate boxes. Switching between the optimisations allowed Edwards to listen to the re-configured PA, all without physically altering the PA hang. 'This dramatically reduced the reflections on the second night,' remembers Simon Honywill.

Mark Edwards agrees, believing that after two years' experience with MLA he is now able to use it to its full potential. 'I can now extract the best performance from the optimisations through subtle manual tweaking of the settings in Display 2 [software].

'The robustness of the new version of VU-NET means I can zone the PA accurately if needs be to influence or correct the tonal balance across the audience area. The evenness of the horizontal coverage pattern continues to amaze me, particularly the way speech intelligibility is maintained as you move further off axis … way beyond what I have experienced with other systems.'

Finally, he says, the system is quick to deploy 'and the even tonality means I can tune it very quickly.'

RG Jones toured a scalable MLA system ranging from 16-element hangs, at the O2 Arena in London down to ten aside.

Said Simon Honywill, 'Because the Left/Right system is pushed wide and upstage we have used some standard W8LM arrays as fills to boost the intensity and energy of the imaging in the expensive seats. We've also used W8LC's as side hangs and four W8LMD built into the set across the front, for nearfield coverage.'

Honywill also took the opportunity to overhaul his FOH set up for the tour, replacing his D-Show and Profile consoles with DiGiCo SD7 and extender, using an Avid MixRack as his insert rack to allow much-loved Sony Oxford plug-ins to play their part. This increased much needed output capacity and enabled him to use SoundGrid, to run Waves audio plugins directly from the console.

These included Waves C6 Multiband Compressor and Vocal Rider to improve the Neeson narration - which compensated for deviations in the dynamic range and raised or lowered the vocal volume accordingly. For vocal mics he used DPA d:fines, DPA's new range of lightweight headset mics.

'The result is that musically it has sounded a bit harder and more aggressive - which is exactly what production wanted,' he said. Even with a 3-tonne, 35-foot tall Martian Fighting Machine firing real flame heat rays at the audience and scanning them with its bug-like eyes, it is the Martin Audio's MLA system, the most intelligent touring system ever, that has been responsible for the dramatically increased level of performance and coverage consistency - even if this is something the audience now takes for granted!