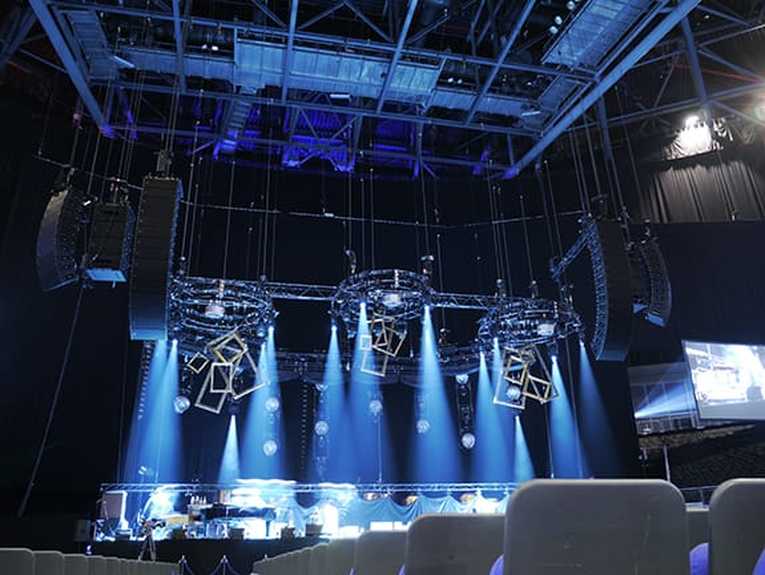 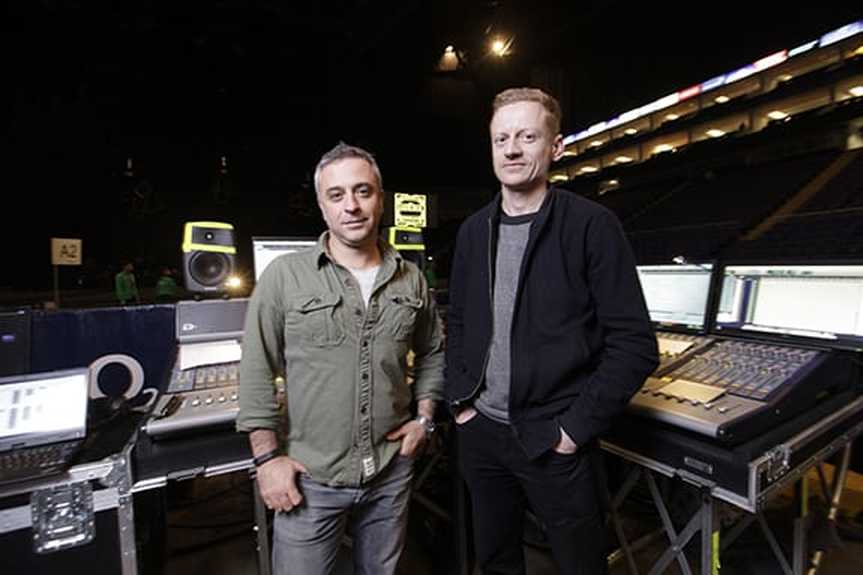 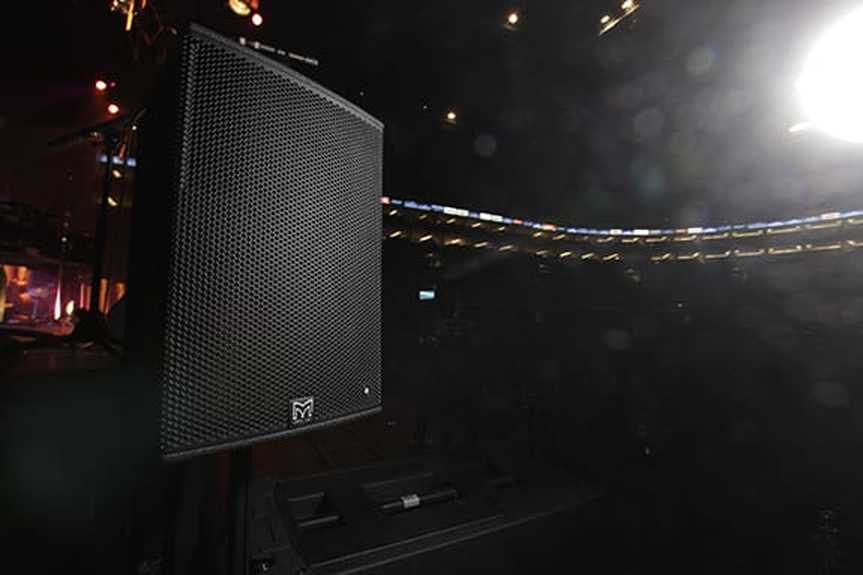 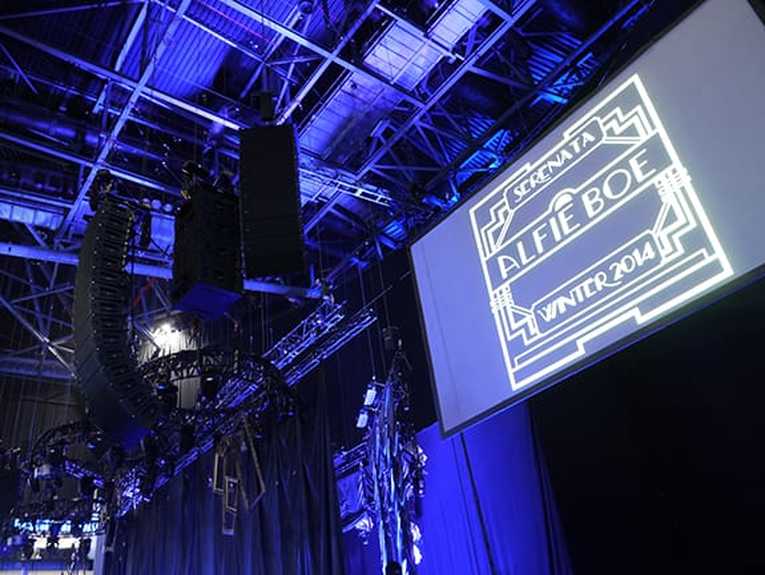 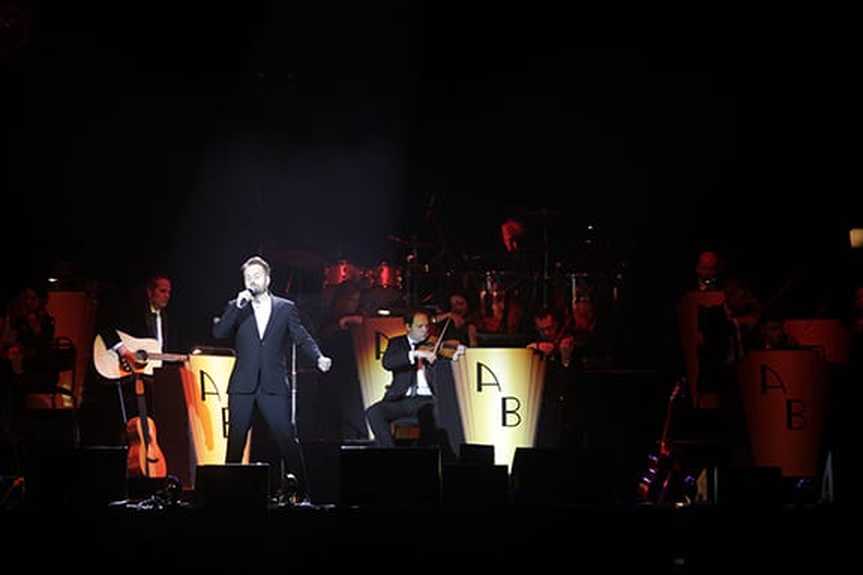 With 86 inputs at the desk (including 80 mic channels), there was plenty to challenge the sound team as Boe worked through an Italian-based romantic repertoire, assisted in one instance by Rick Wakeman on keyboards. But once again MLA passed the test with flying colours.

The same sound team had just come off a six-month stint with Il Divo, who share the same management (Vector) as Alfie Boe, and Pearce had taken the opportunity to tweak the design in order to optimise the sound and further improve rear rejection.

Part of this optimisation included providing 11 slim F8+ enclosures from Martin Audio's Blackline+ series as lip fills along the stage front, while an inspired move was to specify a pair of the equally unobtrusive DD12 (Differential Dispersion) horns on either side of the stage. This certainly met the approval of Cap's project manager, Robin Conway, who described the speaker as 'a really supercharged [Martin Audio] W2' - adding, 'these fill in all the near outfills, and because they are powered, you can put them on the network, which is a huge bonus.'

The deployment of the F8+s too, he said perfectly filled the triangle of seating immediately in front of the stage.

The main PA hangs were based around 14 MLA elements (plus two MLD Downfills) each side, with side hangs of 10 MLA.

Although the show was virtually all acoustic, and hardly dependent on LF overkill, Joseph Pearce had set four MLX along the front - left, right and a split pair in the centre - while flying a further eight (four each side), with the top and bottom enclosures in each hang rear facing.

As for Cifelli, he names MLA as one of his favourite systems, having first encountered it during British Summertime at Hyde Park last summer (where he was mixing Sir Tom Jones), while later, at the Hong Kong Convention Center he was amazed to discover that just 12 enclosures a side would throw a distance of 100 metres. He had no hesitation in requesting MLA for this tour, particularly after such a long and positive experience with Il Divo.

'It was a logical choice,' he said. 'I was confident we could achieve the perfect vocal sound and the clarity required for the orchestra.

'Tom Jones had sounded brilliant through MLA. Alfie has a more powerful, yet more difficult voice - but thanks to the use of multiband compression the vocal never becomes harsh as it does through other systems, which just don't sound as good.'

The challenge had been to shape the voice to deliver warmth and presence via the EQ in the face of loud stage monitoring. The vocal then had to nestle in the midst of a conventional band but with the addition of a 100 year old Dulcitone and accordion - plus the orchestra when it came in.

'With the changes we have made the PA now sounds absolutely great, and the subs are also impressive,' he notes. 'It's now completely silent behind the hangs.

'One of the best qualities of the PA is that I can get the sound I'm looking for straight away. It reacts very well to the way I EQ instruments and I find it is an extremely musical PA - one which throws huge distances without losing any detail. The clarity at 60m-80m is fantastic.'

The sound team agrees that the new [reverse] sub configuration is also much more practical. 'There's a much better transient response and the MLX's display superb rear rejection while still packing loads of impact,' they agree.

The show was driven all-digitally all the way to the speaker boxes via AES3, from Matteo Cifelli's Avid D-Show and sidecar, with all five DSP card slots fully populated - which made the signal path noiseless. An EQ station, used as a master EQ and compressor, was the only sign of outboard dynamics.

But the final word comes from Joseph Pearce. 'To have produced a self-powered, networked speaker system, with some serious companion software, has been a big step up for Martin Audio. The idea of this system is awesome - and it's definitely the future.'