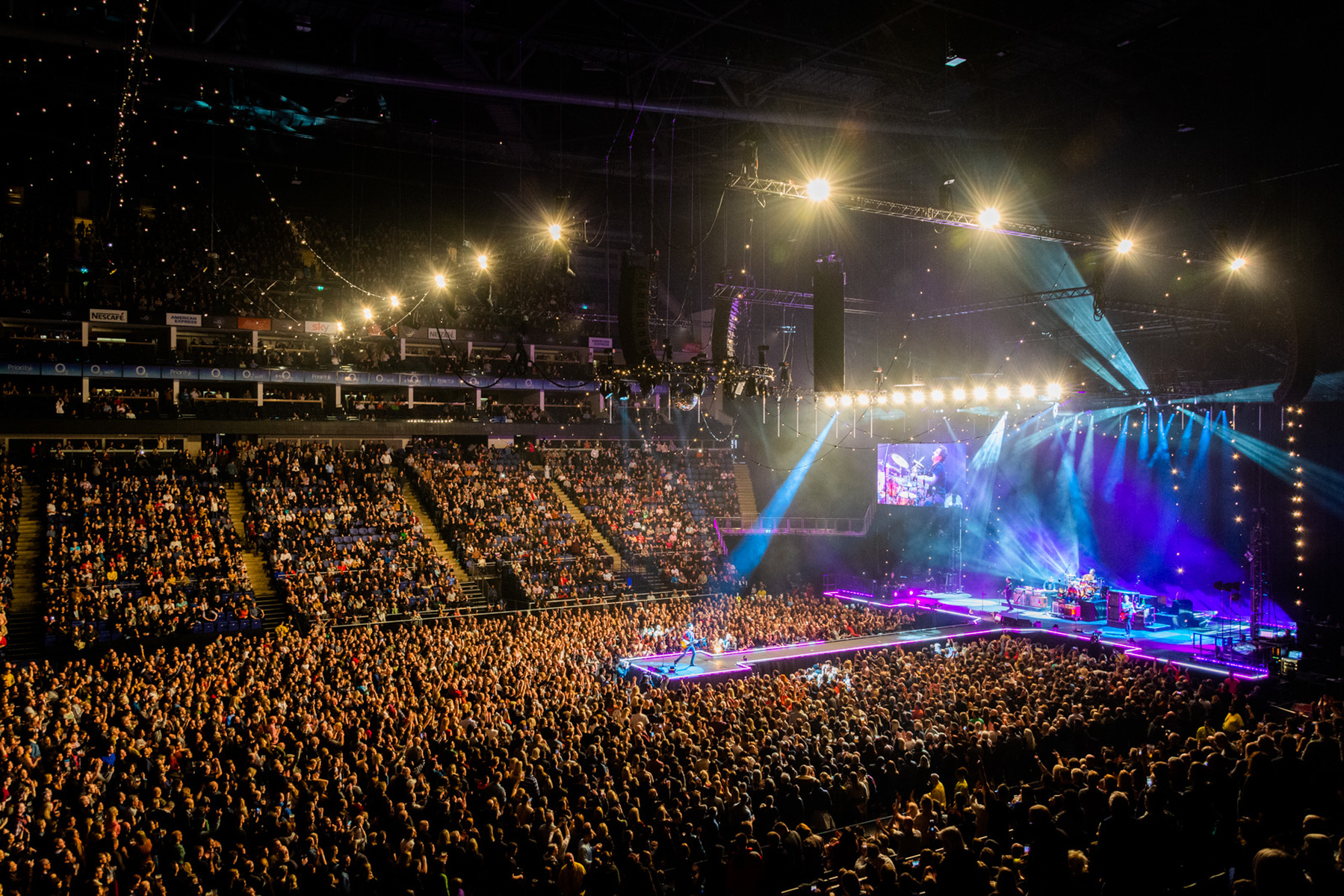 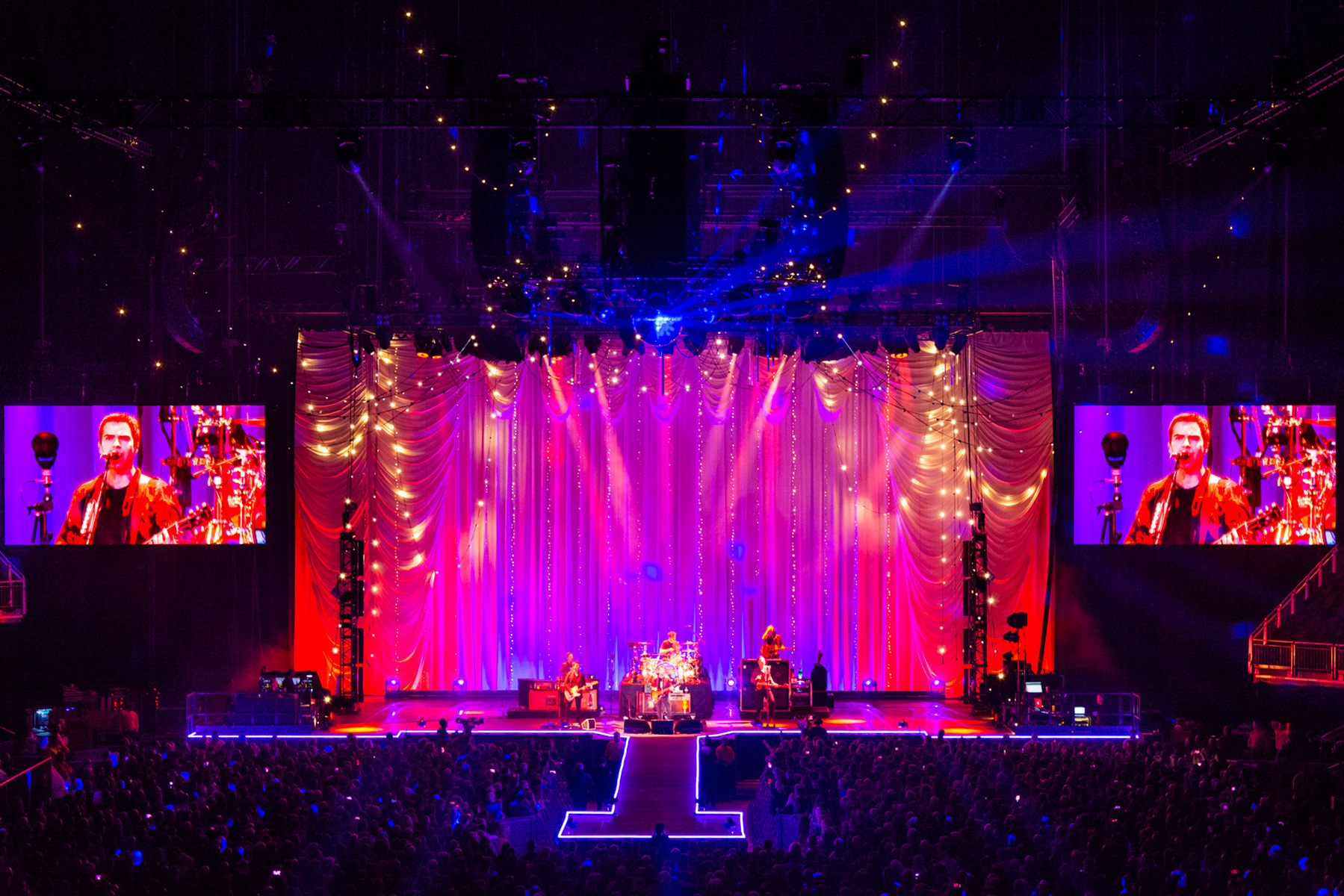 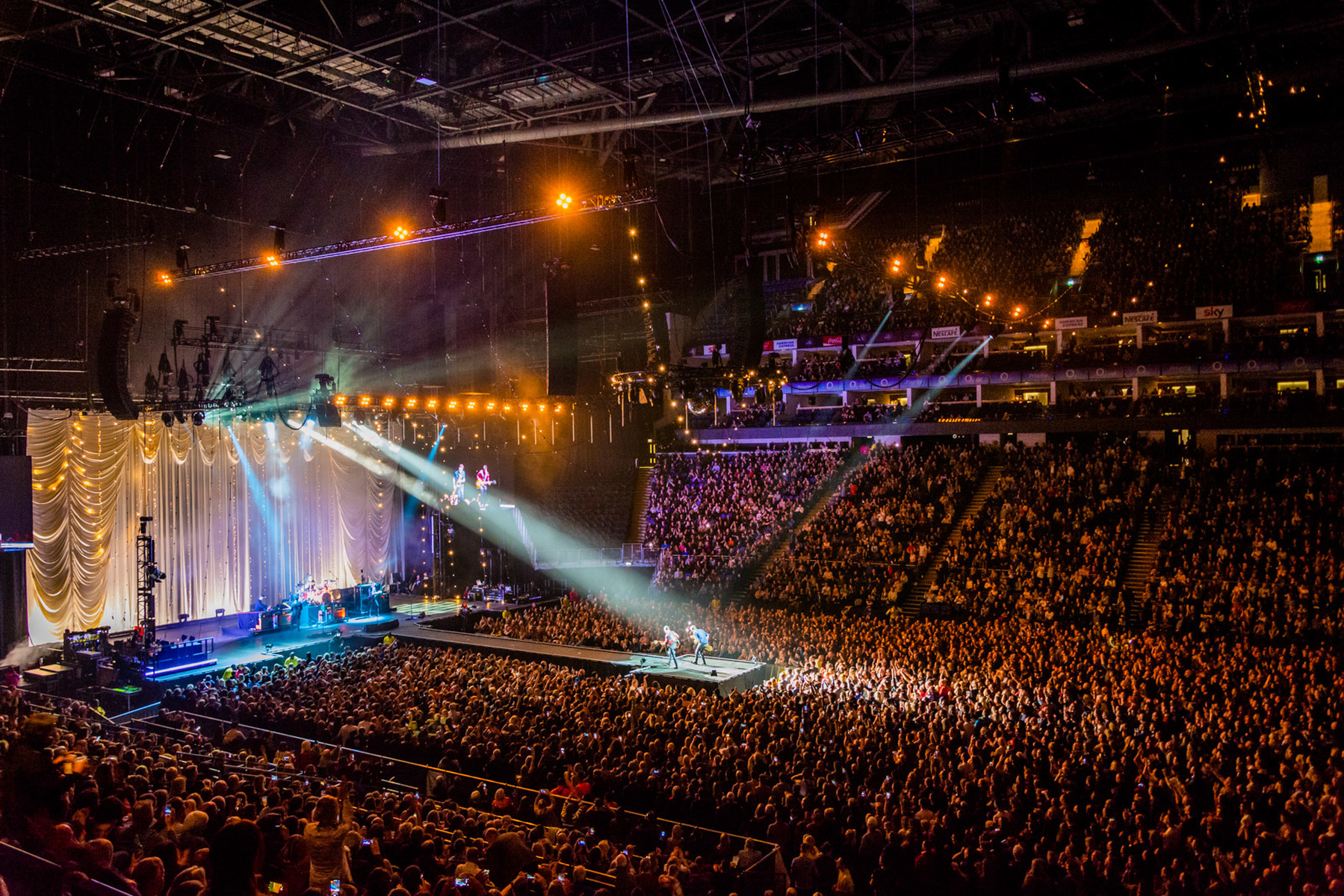 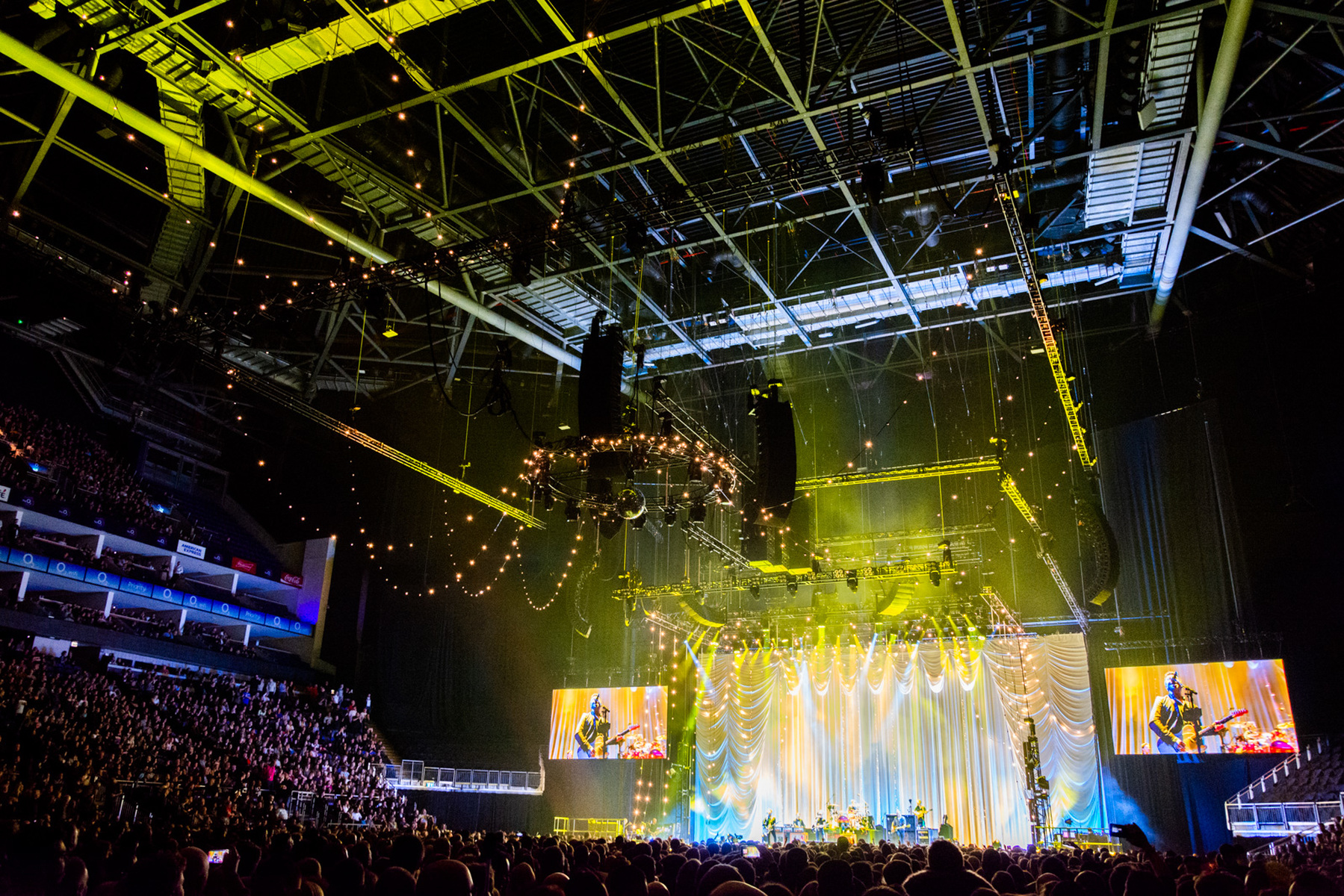 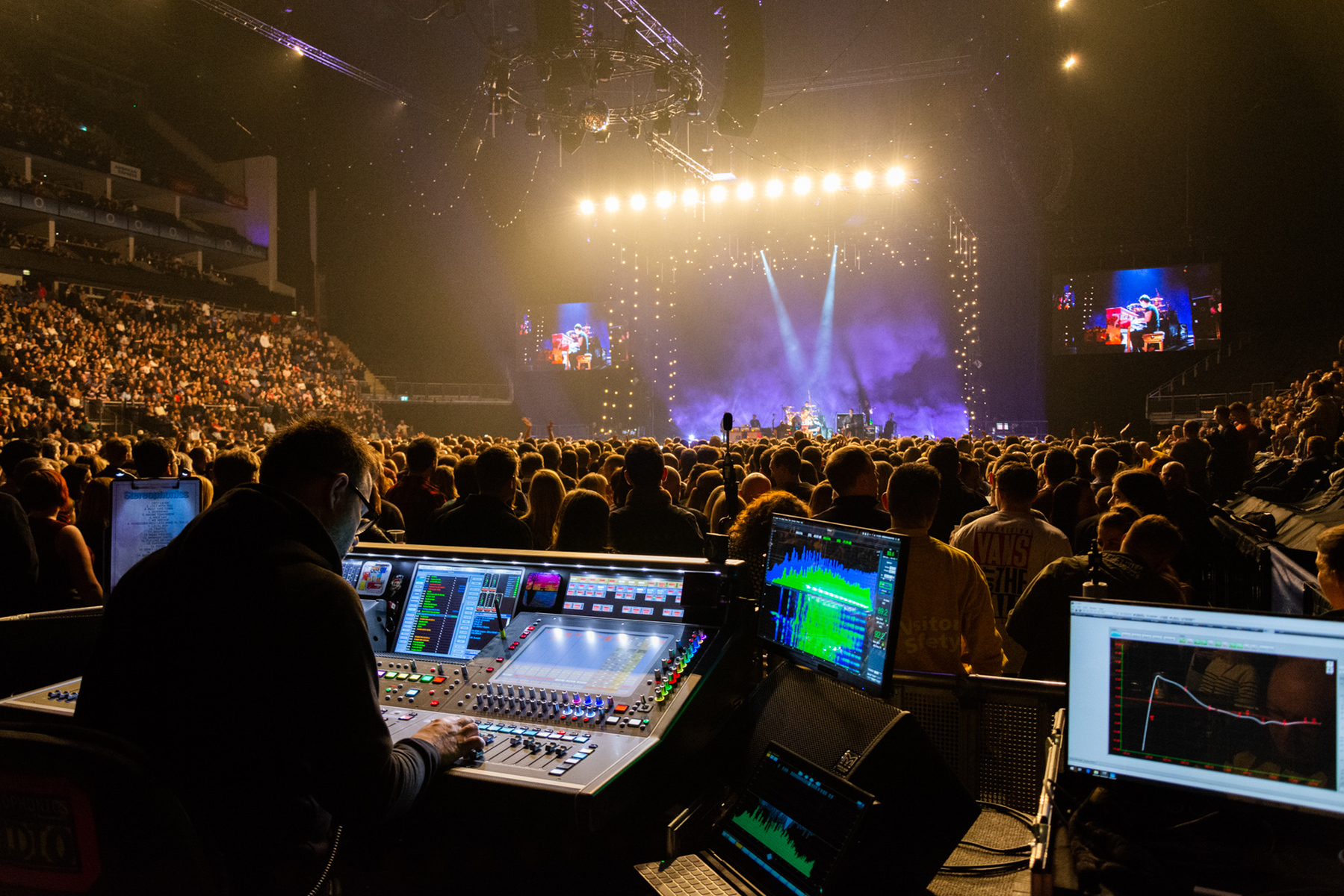 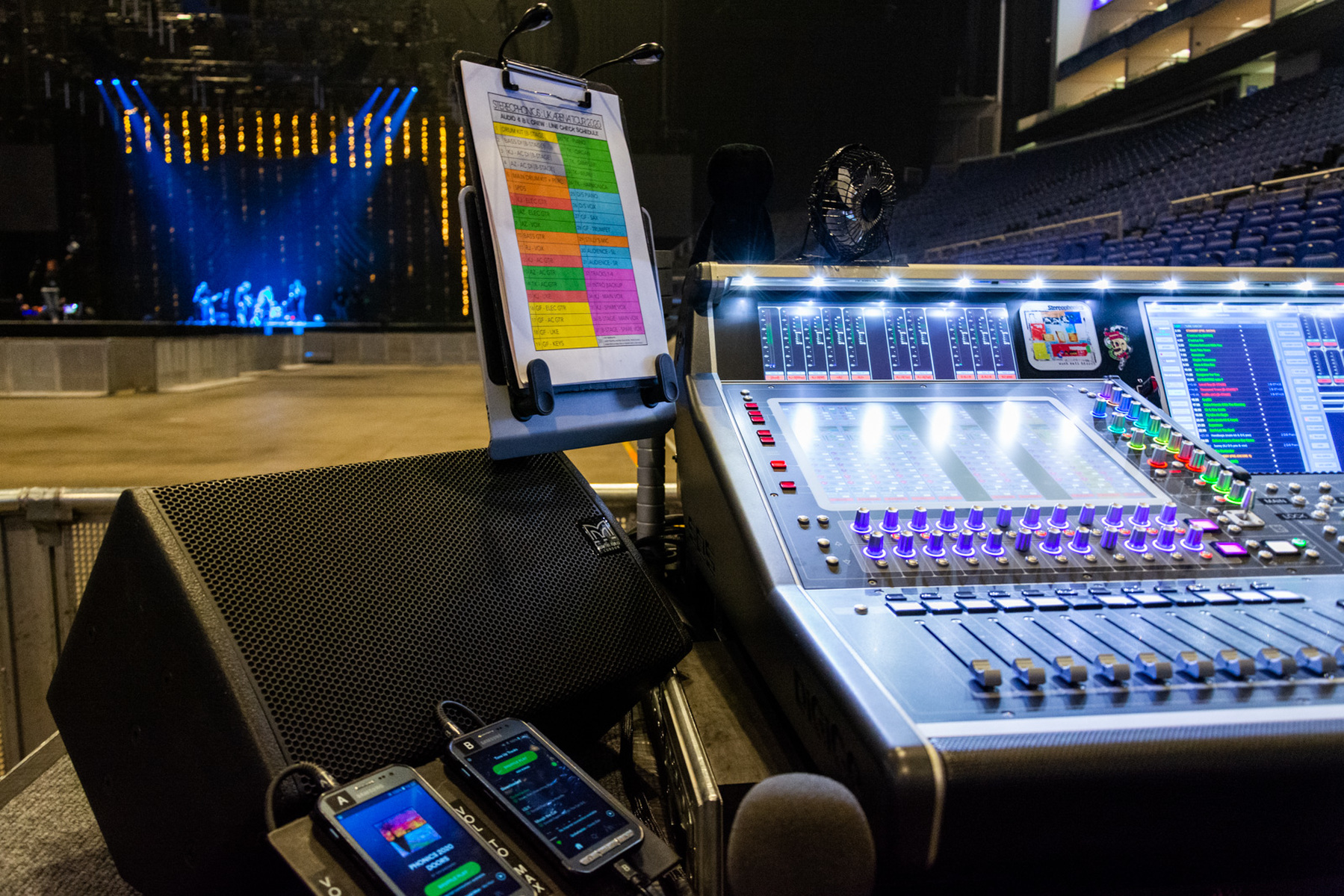 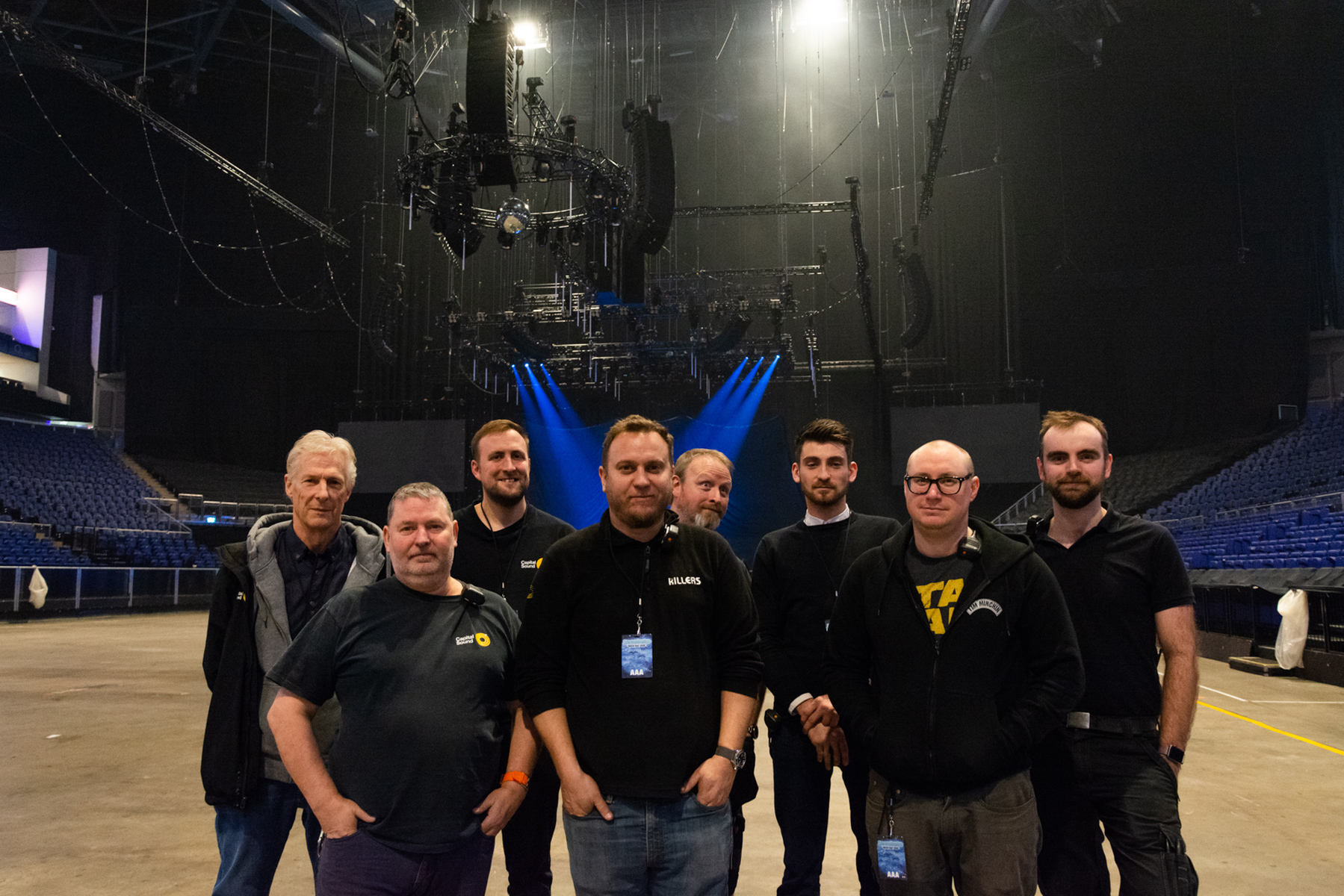 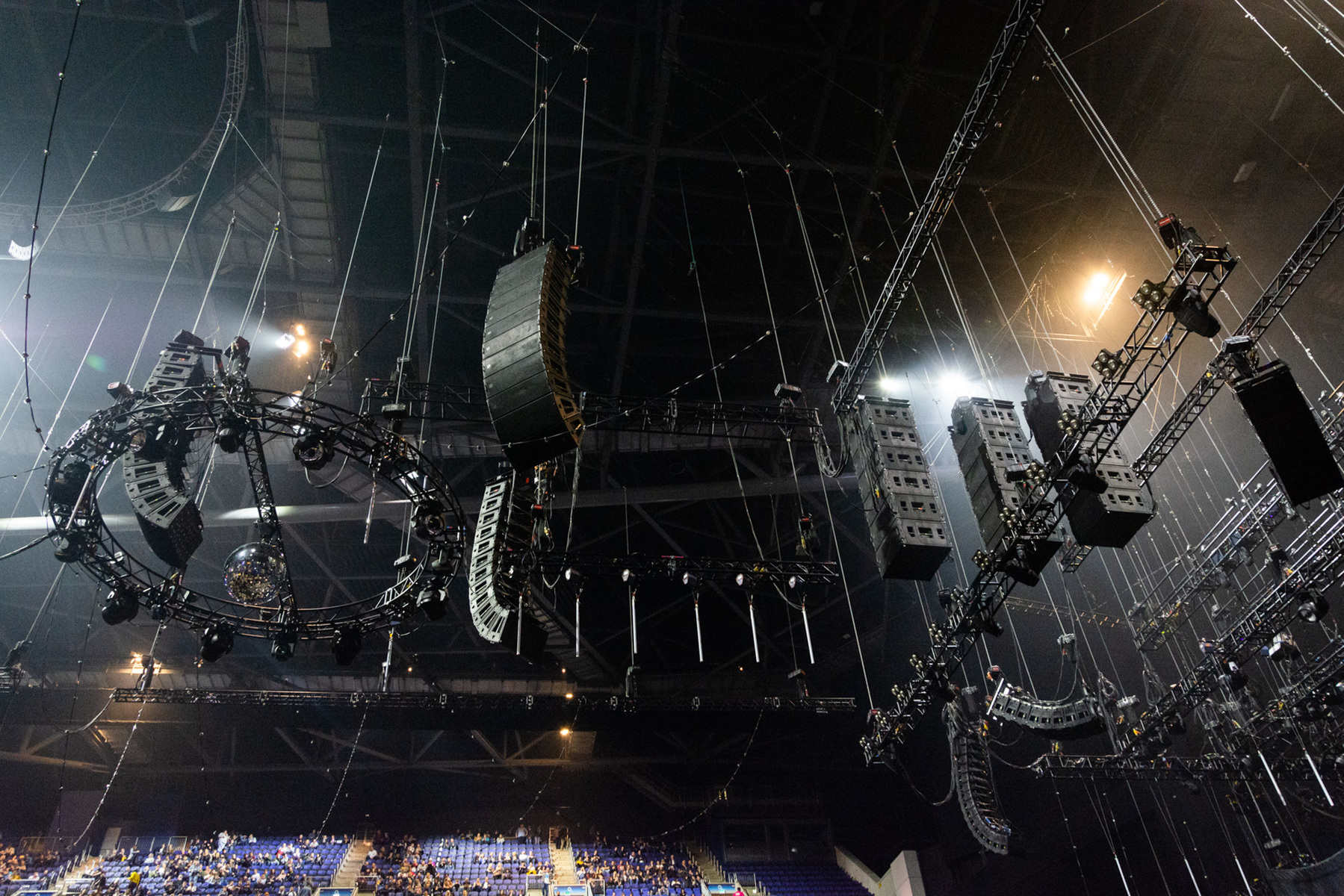 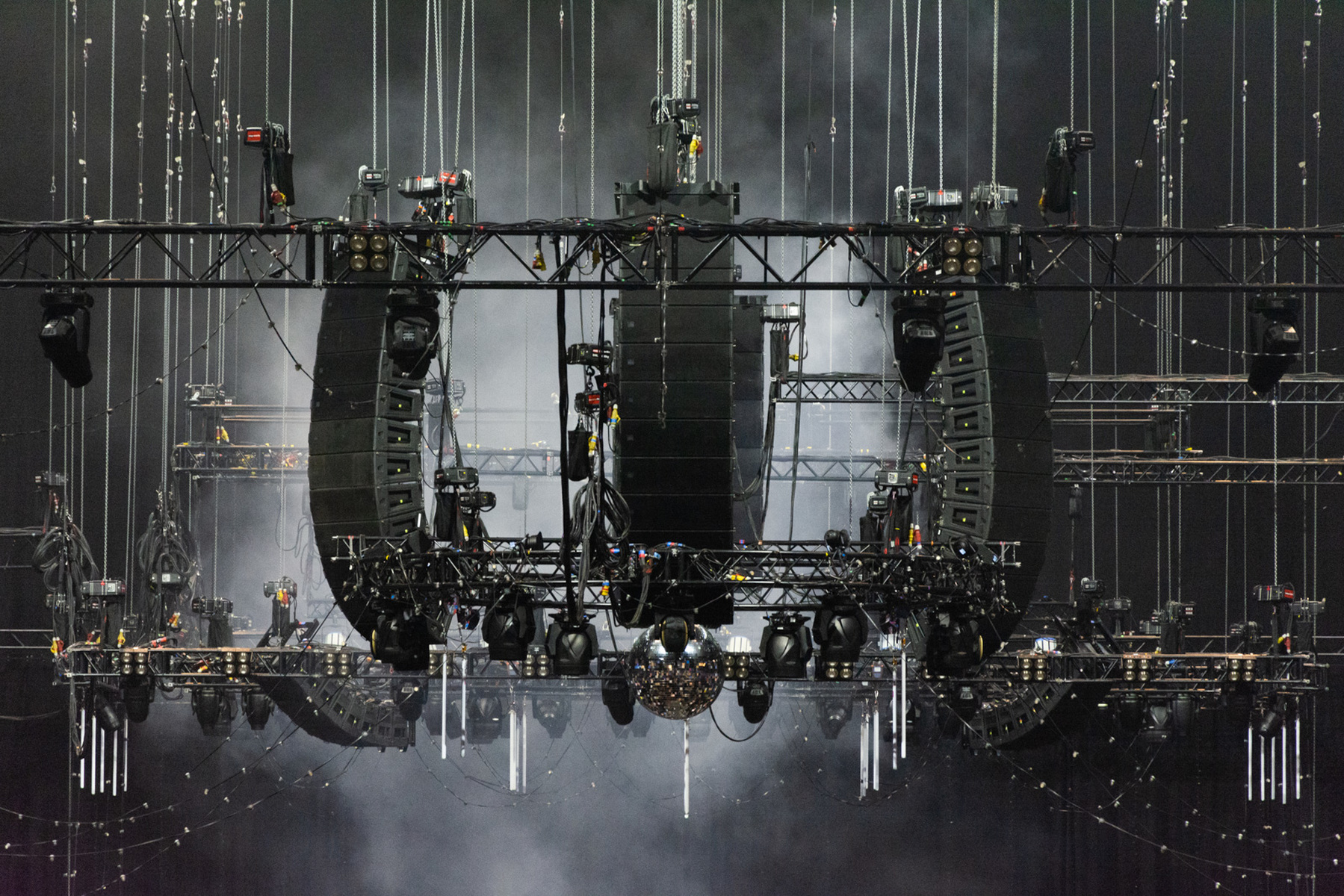 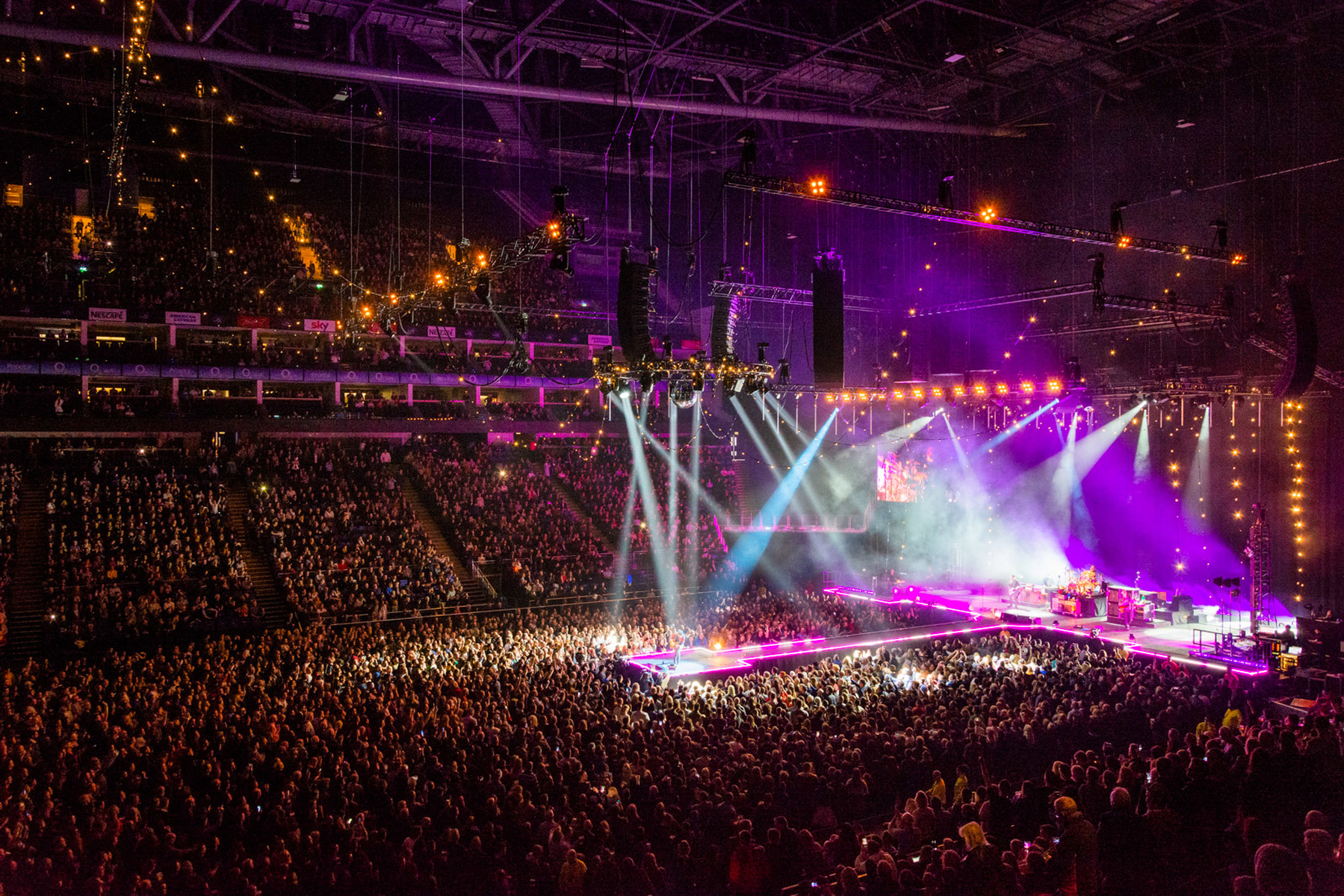 MLA PROVIDES THE THRUST FOR STEREOPHONICS

After 28 years of consistent touring, the Stereophonics’ relentless quest to improve their stage sound and gain closer engagement with their audience continues.

At the request of the band, and specifically Kelly Jones, their sound techs were sent into overdrive, working on a radical approach for the latest arena tour. Long-term FOH sound engineer Dave Roden, using his preferred Martin Audio MLA loudspeaker array, sent his mix to a distributed PA system, running the length of a 60ft thrust from main stage, into the belly of the audience, with a small ‘B’ stage at the end of it.

By opting to play a third of their set right in the middle of the arena (including a solo Kelly Jones set), it would have left the band at risk of absorbing unwanted sounds off the main PA picked up by the vocal mics, had it been set in a conventional L/R configuration. At the same time, performing so far in front of the PA would have required substantial EQ changes, which would have been impractical.

It fell to system tech Nick Boulton, who was making his debut on MLA, to come up with a viable solution. He explained, “We did some modelling with the aim of getting as much even coverage throughout the arena while keeping the weird noises off the stage. With the end of the thrust 60ft into the room it was well within the coverage area of MLA so we simply moved the hangs downstage.”

I was impressed by both the coverage pattern and the power, which was excellent. Martin Audio does things in an interesting and fascinating way, we’ve had a better result than we would with a normal L/R hang.

He was replacing the band’s usual system tech Toby Donovan, who assumed crew chief duties for this tour. However, Boulton had worked previously with Dave Roden on last year’s Tim Minchin tour, using another of Martin Audio’s optimised PA’s. This time around, production was running Dante to the stage and sending AES3 protocol to the hangs, with Martin Audio UNET back-up, which he said also proved straightforward. Monitor engineer, Sam Cunningham was using a DiGiCo SD7 on stage while Roden himself was on an SD5 at FOH.

The tech crew’s solution had been to replace the conventional main stage L/R PA hangs with two side hangs further downstage, comprising respectively two drops of 16 MLA Compact as conventional outfills. Meanwhile, a further eight MLA Compact for infills were mounted on trusses set near the beginning of the thrust, and angled down.

Boulton explained that this operating mode satisfied the set list, which loosely comprised one third rock and roll, one third mellow, and one third on the tiny stage, where a drum kit was waiting.

In this location, three hangs of 10 MLA (and two MLD Downfills)—situated in the centre and 90° upstage—formed a concentric arc at the end of the thrust. Three hangs of six MLX subwoofers were set behind that in end fire configuration. This design, Boulton sensed, would reduce the sound bleed at the back of the stage, and help ease the room reflections.

Furthermore, he said, that in view of the stipulation to minimise sound escape at the main stage they made heavy use of the Hard Avoid™ setting in Martin Audio’s Display optimisation software, not only creating rejection at the back of the stage but also the hard surfaces at the rear of the arena that would cause slapback. “In fact we worked Hard Avoid to within an inch of its life,” he quipped.

Nick Boulton admitted that he had been “pleasantly surprised” by the response of MLA on his first outing with the system. “It was a bit of a learning curve, as it required a different way of thinking, but Display is a very flexible tool. I was impressed by both the coverage pattern and the power, which was excellent. Martin Audio does things in an interesting and fascinating way, we’ve had a better result than we would with a normal L/R hang.”

He also commended the speed of getting the system up in the air and to derig, along with the support provided by Martin Audio. “Considering I had to take all the room measurements from scratch, and we have had to put hangs in different positions, it has been much quicker and easier than I had expected.” In fact, at the new P&J Live Arena in Aberdeen it only took 25 minutes to build the plot, he said.

“We used around five miles of cabling in total, half a mile to get the main hangs alone,” he reveals. Once again MLA showed its advantages. “With another manufacturer’s box it would have required a lot more cable and the weight loading would have been considerably larger, which would have been a problem at Bournemouth ICC, for example, which is weight-load restricted.”

Summing up the tour Martin Connolly, Capital Sound account manager, was unequivocal. “The band are constantly attempting to improve the experience for their audience, and this was again demonstrated absolutely on this tour.”