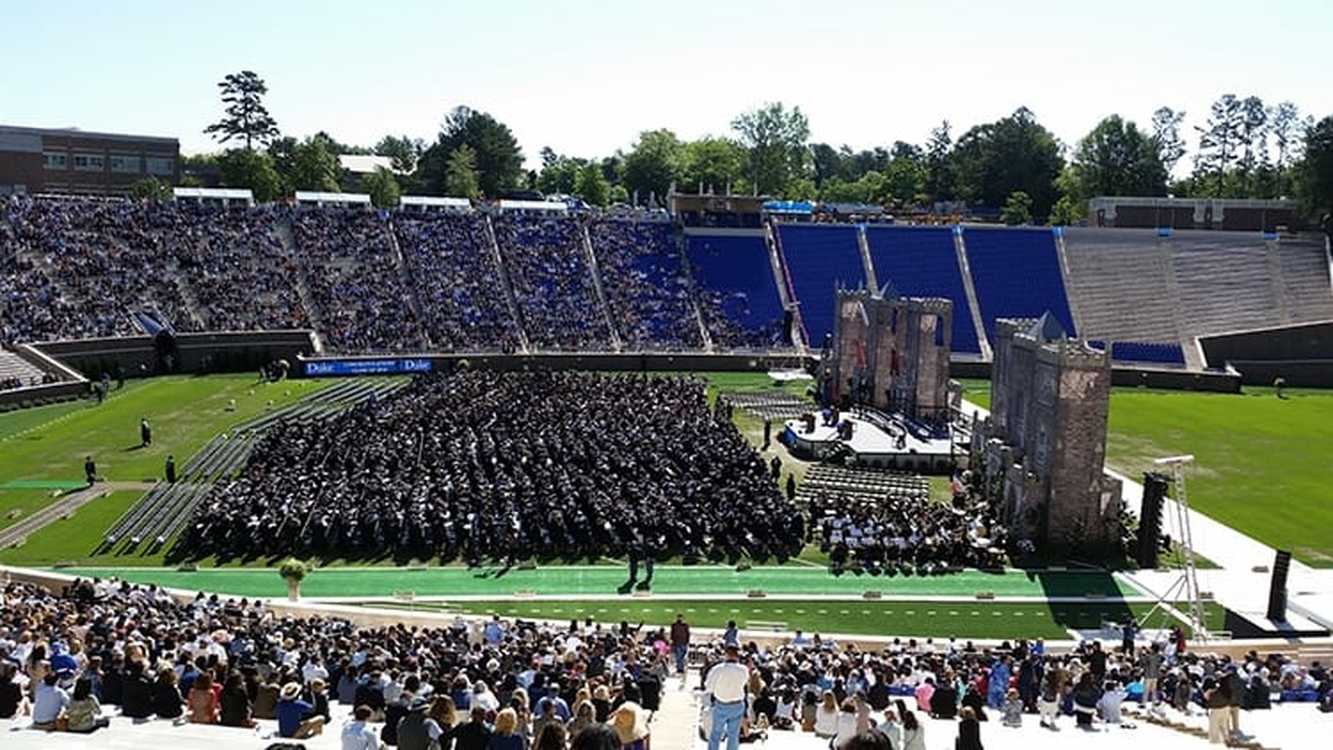 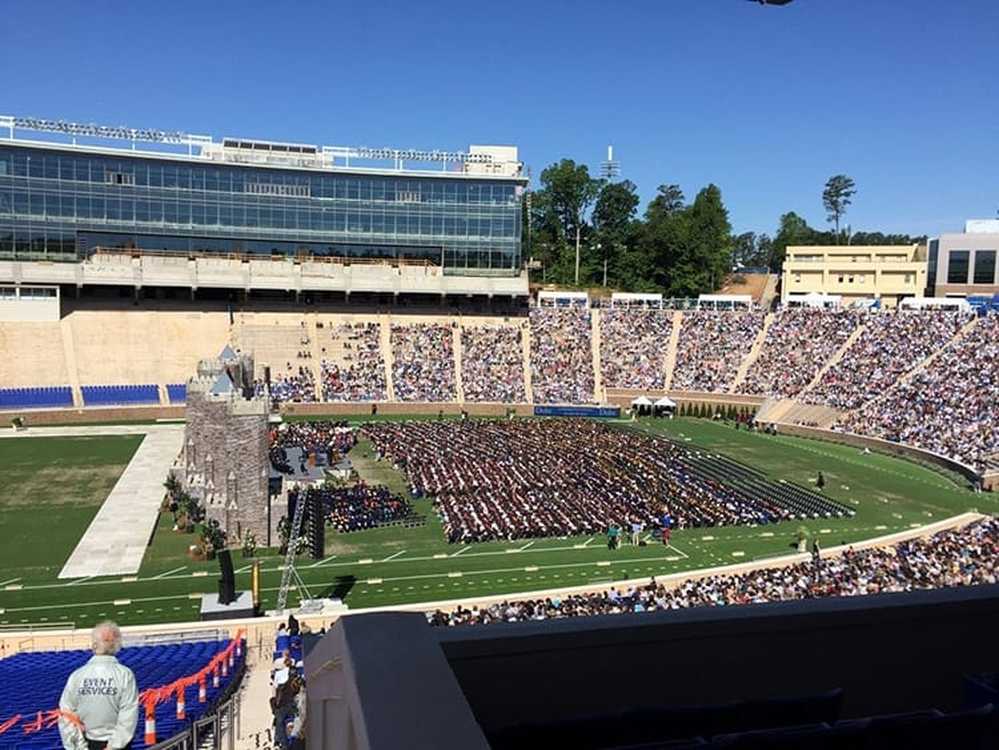 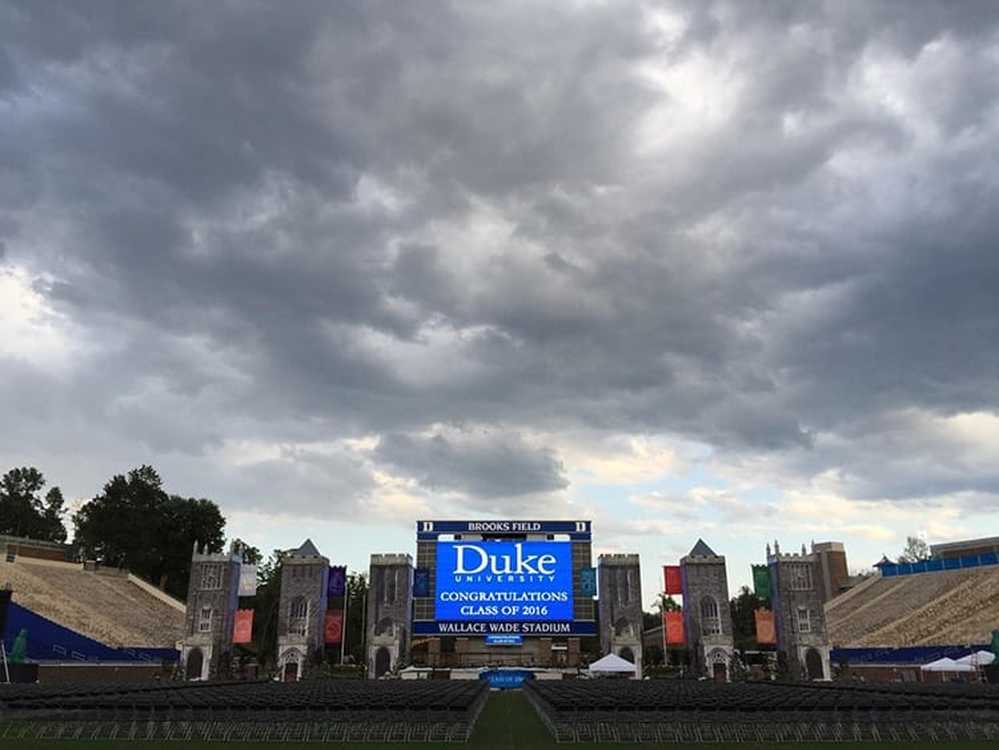 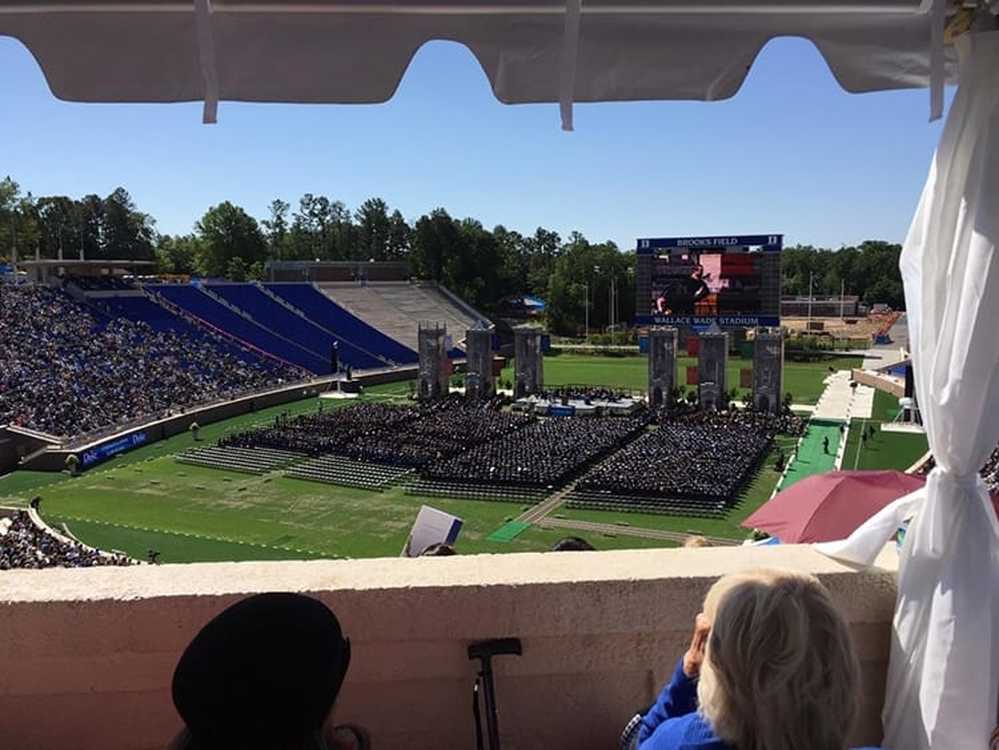 Durham, NC––A unique MLA Compact/MLA Mini system was deployed by RMB Audio at the Duke University commencement ceremonies to provide consistent coverage from the first row of the graduating class seated in front of the stage all the way back to the uppermost seats in Wallace Wade Stadium.

RMB Audio owner Cooper Cannady needed to come up with a viable alternative when informed that Duke wanted no PA systems on Brooks Field visible to graduates, parents and friends.

As Cooper recalls, 'even though there were scaffold towers behind the stage that mimic the gothic architecture on campus, the client didn't want any PA systems on the new grass field that would also impede sightlines and be in camera range.

'So we came up with two PA array lift towers 230 feet apart at the extreme left and right of the stage which is an amazing distance apart, especially in terms of providing balanced coverage throughout the stadium. The stage was on the 45-yard line with the arrays lined up mid-stage on each side. In terms of the PA, the coverage pattern was from 20 feet in front of the downstage edge of the stage for the first rows––which worked out incredibly well in terms of clarity and dispersion––all the way to the top of the stadium at the rear of the field over 350 feet away, and it sounded amazing!'

The main system consisted of 12 MLA Compact a side on the lift towers with 2 MSX subs/power modules and 8 MLA Mini cabinets above ground-stacked on small platforms behind the arrays positioned so as to not impact the sightlines from above and below. A pair of Martin Audio DD12's was used as front fill on the downstage edge for additional clarity.

Describing the outcome, Cooper adds: 'The whole ceremony sounded so good it, was frightening. I kept waiting for the other shoe to drop, but everyone heard the speeches and the orchestra with no problems because of MLA's clarity, articulation and impact.

'The systems' ability to start from the first rows with a big stereo image––despite being that far apart and away from the audience––was a huge advantage. And the thousands of people in the stands were covered consistently throughout with very balanced, linear and smooth sounding audio through the whole area.

'Everyone was very happy with the way it sounded,' Cooper concludes. 'We were originally going to rig MLA Compact on the rear platform, but we got more vertical lift and angles out of the MLA Minis, and they easily projected the distances we needed despite their compact size. The audio quality and balance was absolutely seamless between both systems and the University was very pleased with the outcome!'