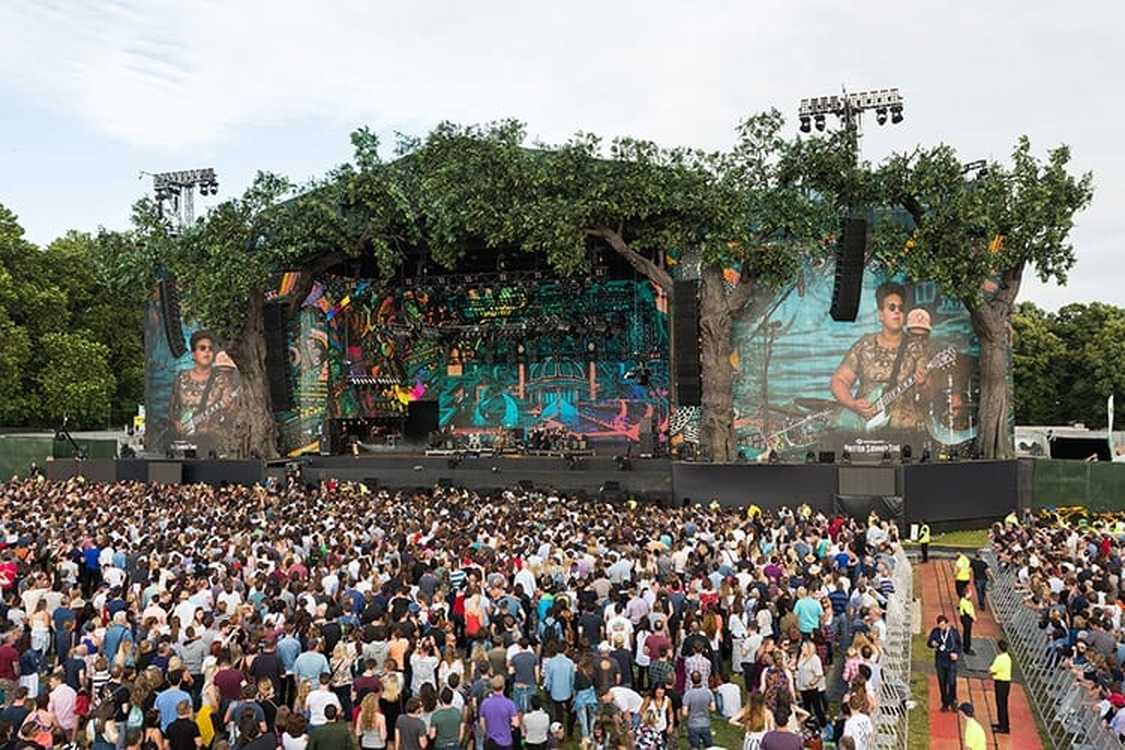 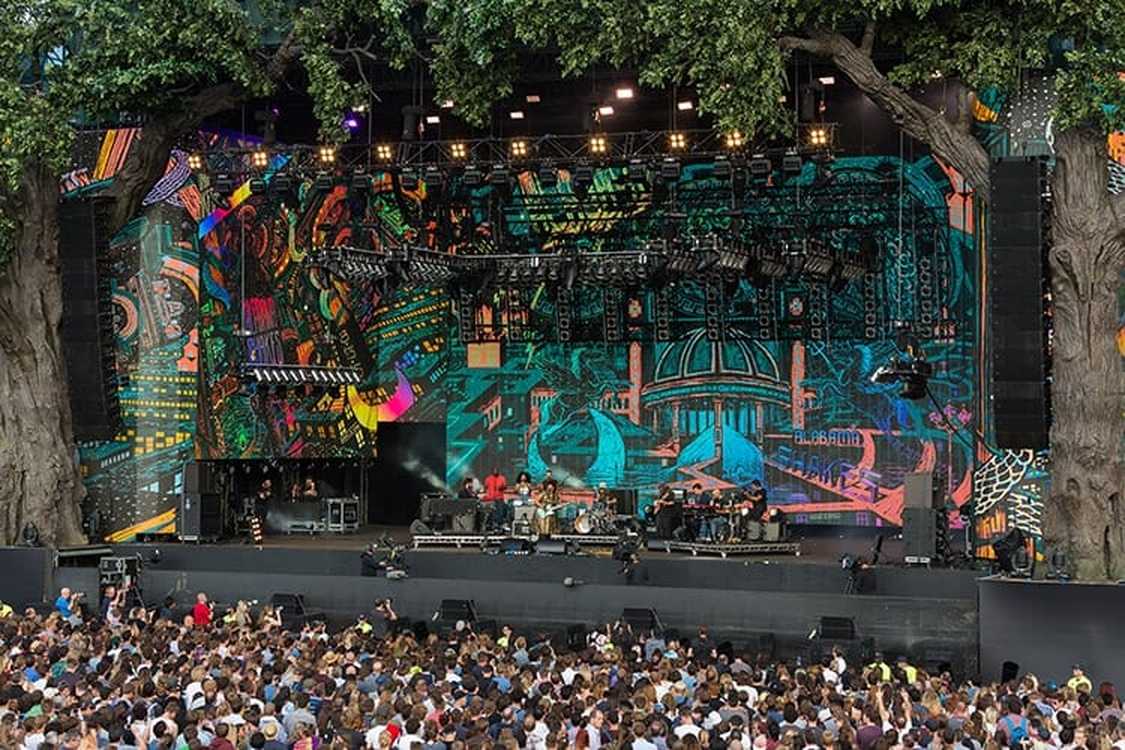 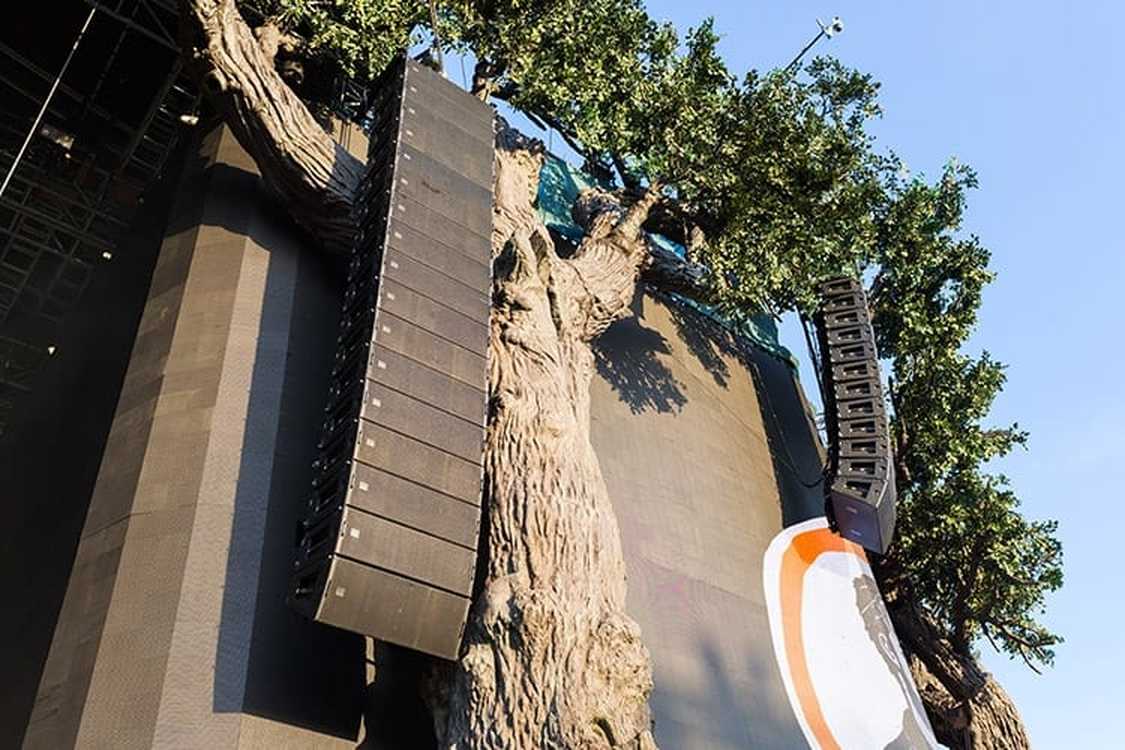 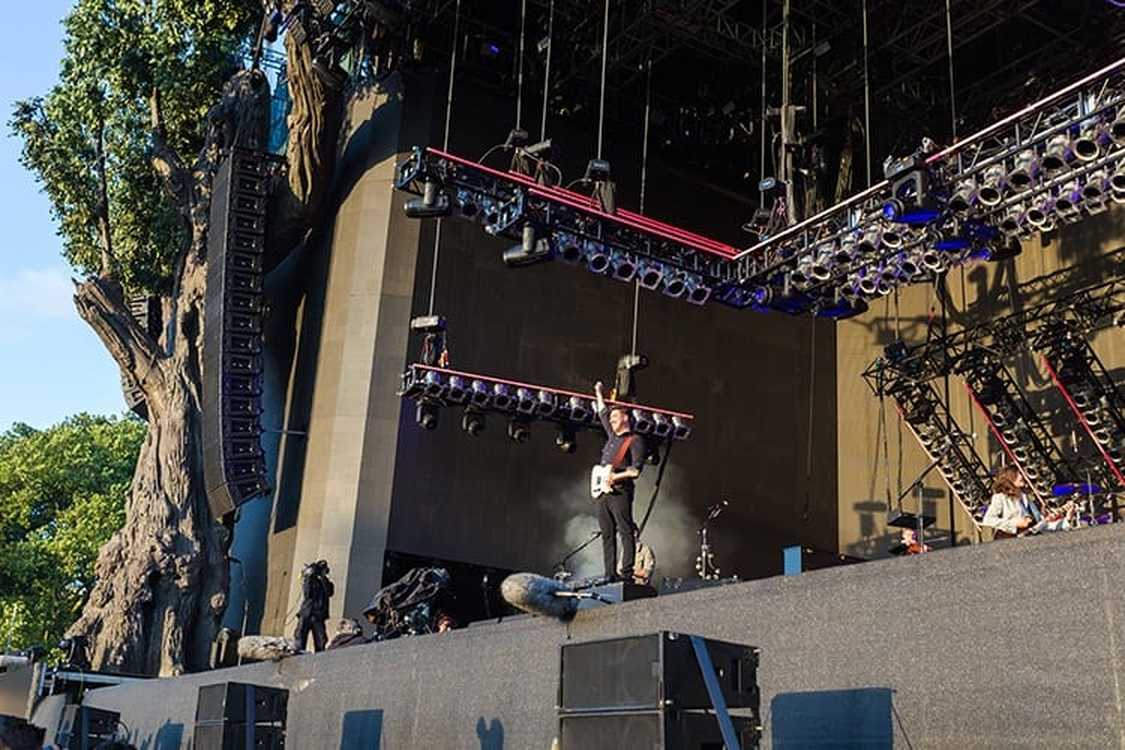 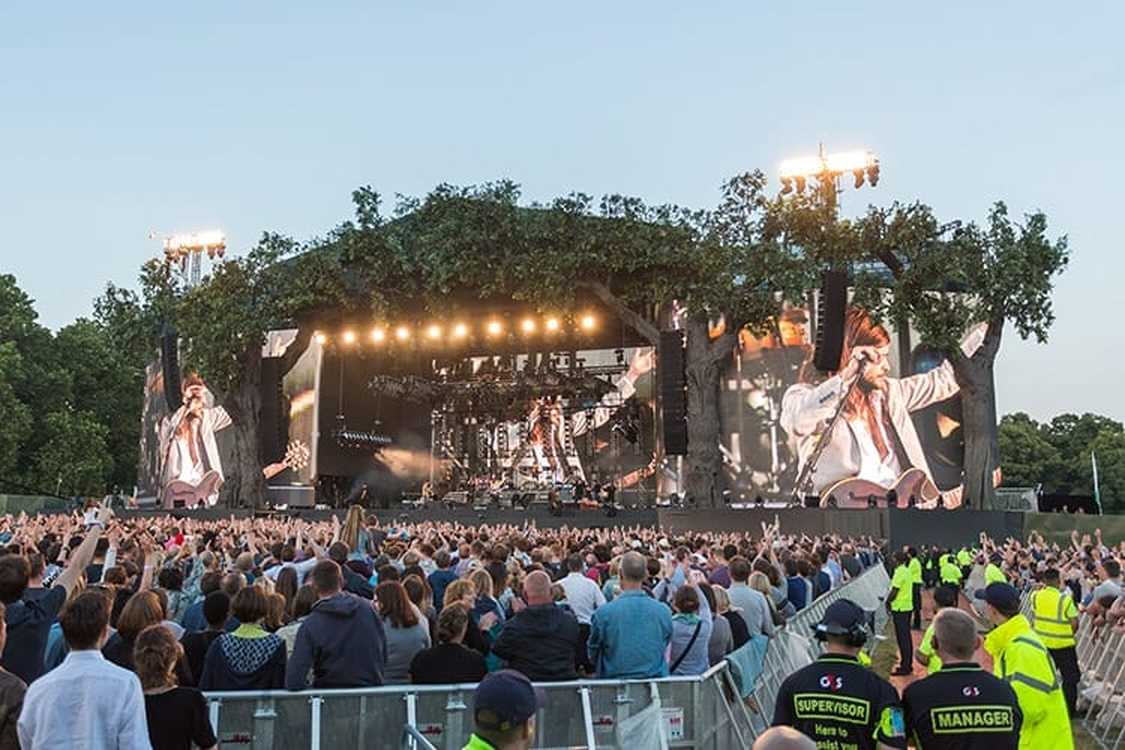 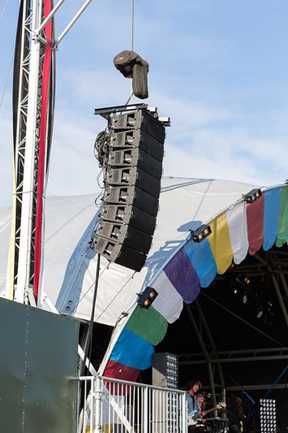 From the opening blast of Massive Attack through to the closing weekend with Mumford & Sons, Take That and Stevie Wonder, the event showed that it continues to evolve in terms of technical development.

Credit for this is due to Martin Audio rental partners Capital Sound, who provided the advanced sound transmission infrastructure, including a digital returns system upgrade.

Although the design configuration that has served the event so well remained, the biggest boost to the main stage sound was provided by the new beta version of Martin Audio's DISPLAY prediction software, as well as deployment of the new Dante digital network devised by Capital Sound project manager, Robin Conway. By driving the PA with their new 16-channel AES3 I/O for Dante, giving them full 96K, Capital were able to further improve MLA's already impressive noise floor.

The impact on the visitor experience was confirmed by the event's long-standing system tech Toby Donovan, who stated that DISPLAY 'had added significant new functionality.' He said, 'By utilising FIR filtering to improve LF control, and making some adjustments to the overall tonality of the system, MLA now sounds better than ever.'

Equally important was that it met both the on- and offsite threshold requirements of promoters AEG Live and sound consultants Vanguardia. 'This was despite swirling winds blowing in the direction of the measurement points,' noted Martin Audio R&D Director, Jason Baird. Of DISPLAY, he said, 'Optimising a full festival rig including side hangs and delays, set back to 400 metres to achieve these target SPL levels presented a very real challenge, which it was more than equal to.'

Supporting Jason Baird's meteorological observations, Vanguardia principal consultant Olly Creedy confirmed 100% success. 'Despite the weather, levels of up to 100dB(A) were achieved at front of house during the first gig, Massive Attack and up to 103dB(A) during the final show for Stevie Wonder.'

Finally, for this year's set-build, MLA broke all records for the speed of getting the system up in the air, tuned, with all propagation tests carried out. 'And this was because you simply don't need to EQ this system,' believes Donovan.

It certainly gave visiting FOH engineers an enjoyable ride. After mixing Jeff Lynne's ELO at Glastonbury two weeks earlier, veteran sound engineer Gary Bradshaw said he was delighted to have been able to turn up at Hyde Park - this time with Take That - patch into the PA and with very little adjustment produce the show. 'I have used Martin Audio MLA several times recently and that has certainly been the case with this system - my output EQ on the main left and right and sub-low were all flat and the result was a very warm, powerful array.'

He observed many similarities between both the musical make up of his two charges as well as production crew and mixing consoles at the events. 'But most importantly, the PA system was the same. Once again no EQ was necessary on MLA over the main outputs; the sound was clear, powerful and very even across a huge area.'

Take That spent half the show performing in front of the PA, with guest appearances from Lulu and an opera singer (also in front of the PA). 'This can be problematic, but in this instance it was easy to place the vocals in the mix without any adjustments.'

Reviewing the system performance, he described the vocal sound as 'warm without being muddy, with crisp highs and great detail. The sub-lows were smooth all the way down and the transition from bass to sub-low was very even. Also I was able to run the show at normal level. The sound design was such that leakage into nearby sensitive areas, like Park Lane had been kept to a minimum without compromising SPL for the audience areas.'

MLA had originally been introduced for the inaugural British Summertime event in 2013, to mitigate the historic noise pollution problems and consequent neighbourhood complaints around Hyde Park. AEG Live adopted MLA to help solve this, knowing that its advanced level of control would enable them to maintain an offsite level beneath the stipulated threshold, and yet they could raise the SPL considerably within the audience area, to give crowds of up to 65,000 the festival experience they have come to expect.

MLA also showed its versatility, as while the sound for Massive Attack had been described as 'thunderous', on July 8th Mumford & Sons required a more subtle and versatile approach, as did acts on the same bill like the Mystery Jets on Barclaycard stage and The Strumbellas on the Summer Stage - all playing through Martin Audio systems.

Summarising the site wide experience, Jason Baird said, 'We were delighted with the deployment of our systems again this year. The sound of the main stage system sounded really natural.'

And Jim King, Senior Vice President, Live Events, at AEG, added his endorsement. 'Four years into this event it is reassuring that we are still able to operate at sound levels that were once unimaginable while again keeping neighbourhood complaints to a minimum, despite the windy conditions.

'Capital and Martin Audio continue to refine the sound system year on year, with increasingly sophisticated software, and the improvement was immediately noticeable when I walked the site before the festival began. It is this that continues to keep us ahead of the game.'

The sub array consisted of 21 x MLX in a broadside cardioid array, with a further 11 enclosures back facing. Additional W8LM Line Array enclosures provided front fills, while an array of LE1500 floor monitors were provided throughout the BST season.

Martin Audio systems were also provided for several other stages. On the Barclaycard Stage, 8 x MLA Compacts were flown on each side with 14 x WS218X subs in a L/C/R cardioid configuration, with four Martin Audio DD12 providing front fill sound.