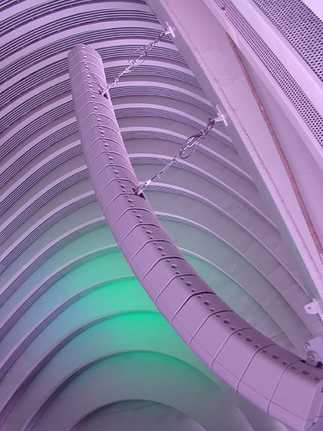 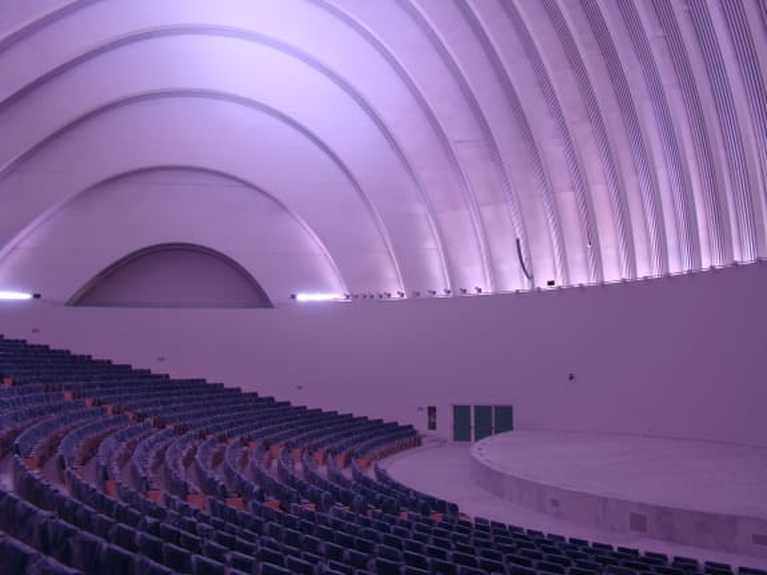 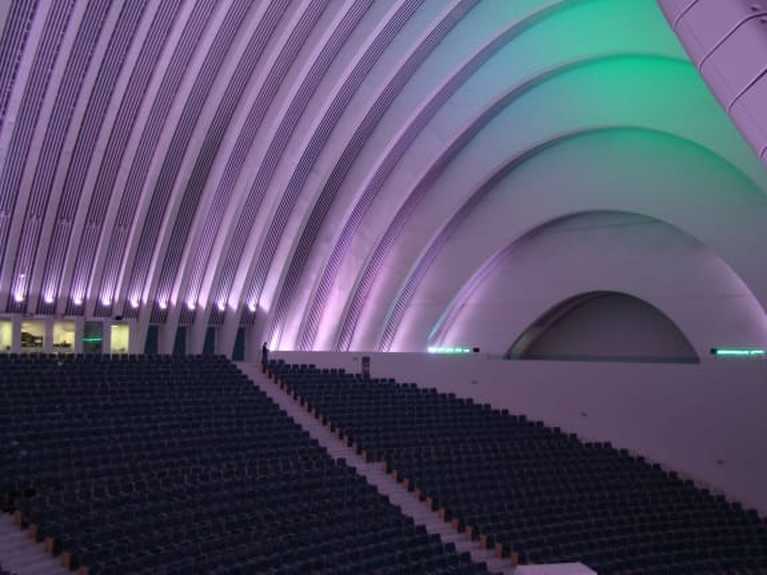 The Congress Palace (Ciudad de Oviedo), which has opened in the heart of Spain's Asturian capital, has already become a new symbol for its spectacular architecture.

Designed by Valencia-born architect Santiago Calatrava, this visually stunning exhibition and convention centre has left its own indelible footprint on the local landscape.

Set on three floors, and elliptical in shape, the 15,530 sq. m Congress Palace consists of several different function room and exhibition spaces - but without doubt the most spectacular is the main auditorium. This unusually shaped 2500m2 hall has a seating capacity of 2,144 seats, with a height of 45.16m up to the dome.

With the complex geometry (and high reverberation time) of the room, the choice of sound system was critical - and after an extensive study of electro-acoustic systems the decision was taken to specify an OmniLine® micro array system from Martin Audio.

According to Marc Rovira, product manager at Adagio Pro, the Martin Audio distributor in Spain, in order to achieve optimum intelligibility given these challenging conditions, it was logical to propose a system with a large coverage control pattern, especially in the vertical plane.

Thus two hangs of 24 OmniLine elements, with a 2.82m drop, have been flown on either side of the stage.

Rovira and the project manager of Adagio Pro, Bernat Camacho, knew that given the micro size of OmniLine, the array would provide a perfect and discreet solution. Each module measures just 24.5 x 11.5 x 20cm and weighs 3.5kg, with drivers and mechanical alignment techniques purpose designed by Martin Audio for this product. Up to 32 modules can be interconnected and in many cases just one amplifier channel per array is required, while the system achieves high levels of SPL and delivers unprecedented vertical accuracy.

However, in this instance the installers, MEDIACOM 95 and GMI, preferred to divide each column of the array into three zones or channels of amplification to produce a higher level control in the audience. Processing was carried out in a Martin Audio DX2 4in/8out DSP environment, which manages the different levels and equalisation of each column.

Camacho, supported the installation every step of the way, initially presenting a 2D model using OmniLine's own software, before constructing a 3D visualisation using EASE software, in order to study the coverage throughout the room and the predicted levels of intelligibility.

The full integration of the audiovisual systems was carried out by MEDIACOM 95 and GMI with the final tuning and commissioning carried out in conjunction with the engineering team of Adagio.Pro. The result is a loudspeaker solution of high quality, which at the same time is impressively discreet.