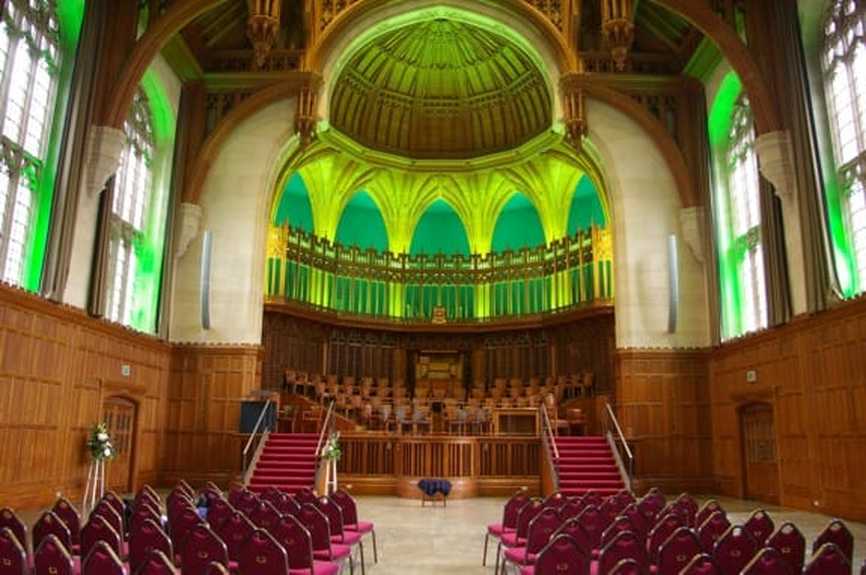 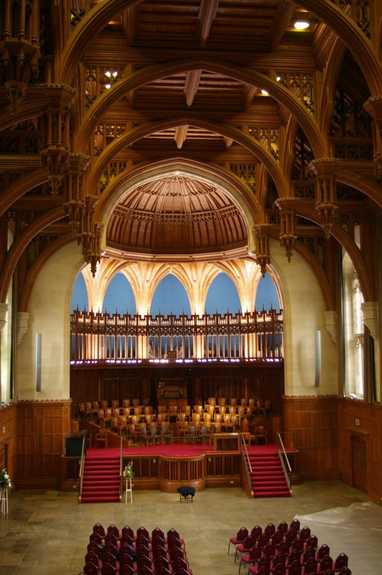 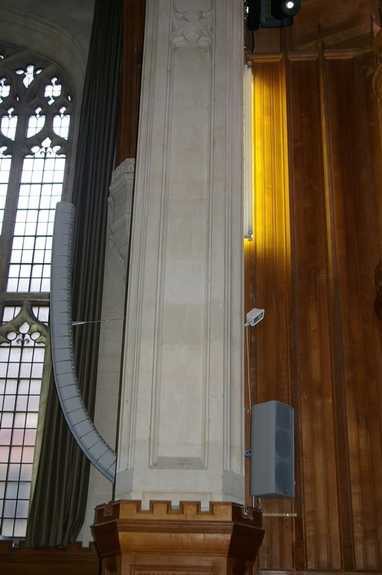 One of the UK's most important gothic buildings recently commissioned a new multimedia infrastructure to extend its functionality within the precincts of Bristol University.

The entire integration at Wills Memorial Building was undertaken by locally-based contractors, Sounds Commercial, and has been constructed around two 24-box hangs of Martin Audio's OmniLine micro line array - the largest single OmniLine source yet installed.

OmniLine had been recommended by Glastonbury-based distributors, Batmink Ltd (with whom the installers enjoy a close relationship) as representing the best solution to the challenge of replacing old 1970's stacked cone column speakers, recessed behind wooden panels in the Grade 1-listed building.

OmniLine is a versatile, micro line array designed for installation in a wide variety of architectural environments. Its modular approach and scalability extend its use from foreground applications to sound reinforcement in large acoustic spaces. Intelligent software enables an array to be configured to deliver sound precisely over any vertical angle to fit the venue profile, without spilling onto surfaces where sound is not required. Additionally, elimination of high-frequency side lobes gives OmniLine the advantage over currently available DSP-steered columns, making it suitable for high quality music reproduction as well as speech in large reverberant spaces.

Perfect criteria then for a high vaulted space such as this, surrounded by the academic teaching spaces of Bristol University. While the sound's directivity met the criteria of Sounds Commercial's project manager, Blake Gifford, and senior project engineer, Lee Stephenson, the system aesthetic received the approval of project architect, Tim Stephens of Kendall Kingscott.

Working under the guidance of English Heritage - and alongside main building contractor Stone BCI - all fixings of OmniLine had to be made along the mortar lines between the slab stone, requiring the bottom bracket to be re-engineered and the fixing made secure with chemical anchors.

One of the last magnificent Gothic buildings constructed in England Wills Memorial Building was designed in 1912 by Sir George Oatley and eventually completed and opened in 1925 by George V and Queen Mary.

The building was commissioned and funded by Sir George A Wills and Henry Herbert Wills, the tobacco magnates, in honour of their father, Henry Overton Wills, benefactor and first Chancellor of the University.

The central feature of the edifice is the stone-constructed Wills Tower, which is 215 ft tall, while the interior contains beautiful feature windows and carved wood paneling.

There are a number of seminar rooms, tiered lecture theatres, meeting rooms and an exhibition space - but the centrepiece is the Great Hall. With its two balconies it can seat up to 900 people for plenary lectures and 270 for banqueting. The Great Hall hosts a vast range of functions and events, including Christmas carols, organ recitals, graduation day ceremonies, VIP and academic lectures - and third party rental provides an additional revenue stream. Thus it required a versatile sound system.

Sounds Commercial tendered against four other companies. 'But one of our advantages was the ability to quote for the lighting, sound, control, programming and AV,' says Blake. 'Being locally based was a further advantage as was the fact that the university had worked with us in the past.' Having been awarded the contract, Sounds Commercial realised they would need to retain some of the existing infrastructure and preserve the existing methods of working.

'Grant [Thomas, Batmink sales director] suggested we try OmniLine, so we set up a demo day and [Martin Audio national sales manager] Simon Bull brought in a 16-box hang on a couple of Strato-stands,' Lee recalls. Also at that meeting was Damian Orritt of Design AV Europe - the original project designer.

'What we were looking for was clarity, evenness of coverage and directivity because it's all teaching space around here and so containment was important; there were also the aesthetic concerns. We just fed the system with a CD and radio mics - it sounded stunning and passed the test with us, and the people from the university.'

The installation was supported both by Batmink - who provided much of the overall equipment - and Martin Audio design engineer, Ambrose Thompson, who undertook the sound survey.

A biamped solution was recommended, with the entire system run from Martin Audio's four-channel MA6.8Q.

The system was modelled using a beta version of Martin Audio's new OmniLine Software, with SIA-Smaart's dual-channel FFT analysis verifying the measurements. Professing to be delighted with the new software, Ambrose said. 'Having determined the splay angles the next step was to set the EQ. This was the first real world example and the automatic EQ setting function I found to be really good.'

By splitting the system into biamp mode Sounds Commercial were able to provide increased punch at the back - with 3dB boost for the top eight boxes, firing at the balcony. Given the high directivity of the line array no delay system was necessary.

To gain the additional bandwidth bi-amped is the obvious solution for anything over a 16-box hang, believes Ambrose.

In addition to OmniLine, two Martin AQ28's face back from the stage pillars to provide performance monitoring, while a further pair of AQ6's provide booth monitoring up in the control room.

For Sounds Commercial - who specialise in everything from large stadium installs to designing lighting circuits - the integration has proved a real triumph, and for once a high-vaulted open space hasn't thrown up ridiculously long RT times.

'We have been fortunate in that there hasn't been any kind of acoustic treatment necessary,' summarise the Sounds Commercial project team. 'In fact very little processing has been necessary.'