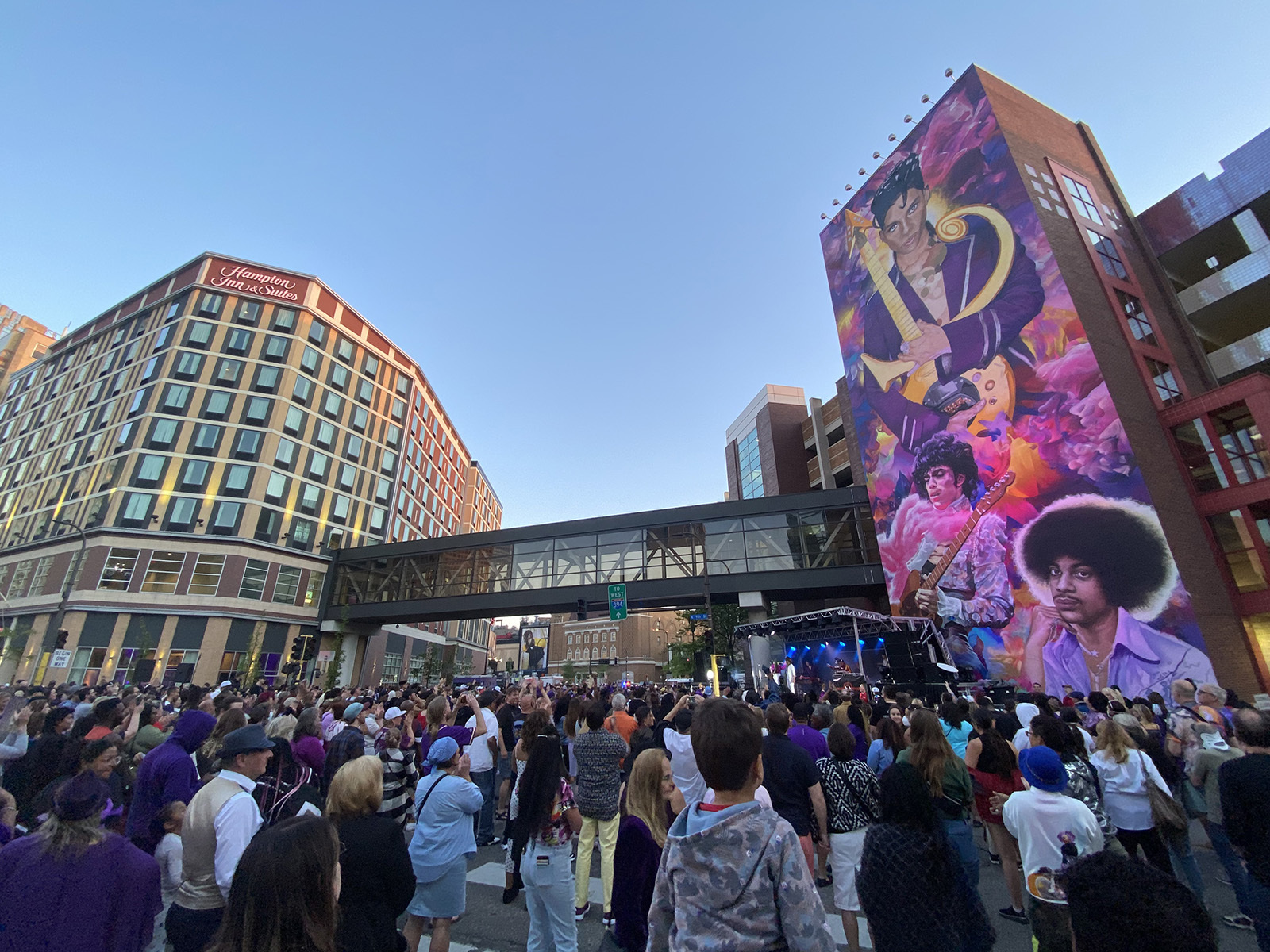 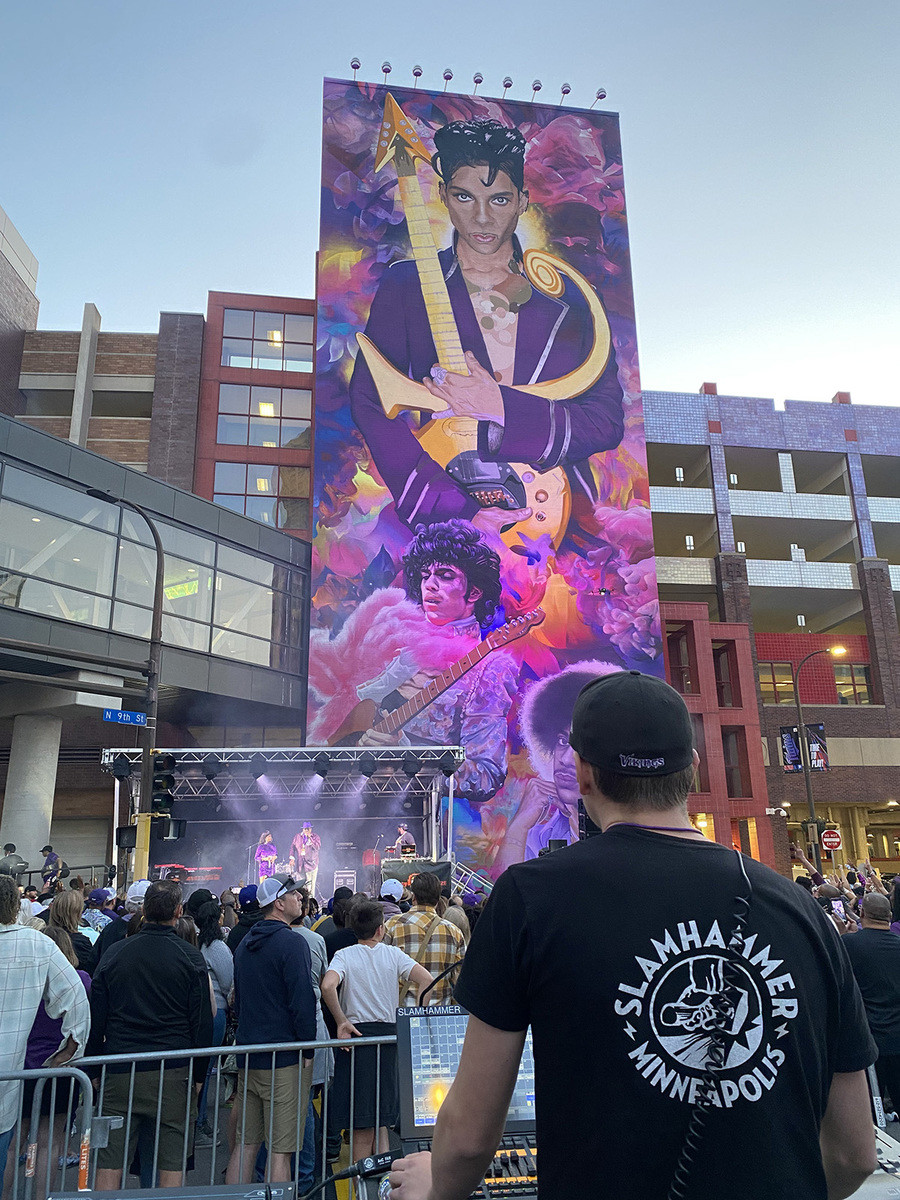 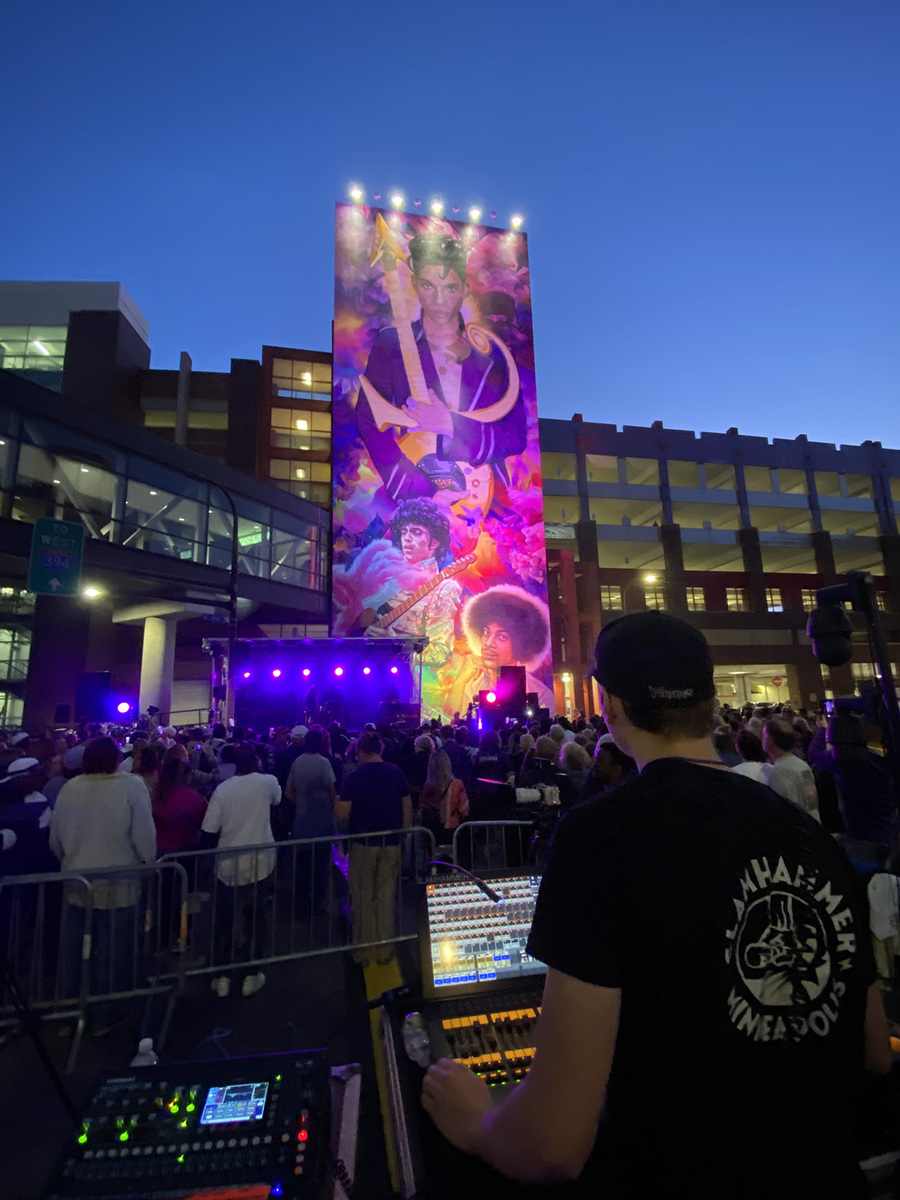 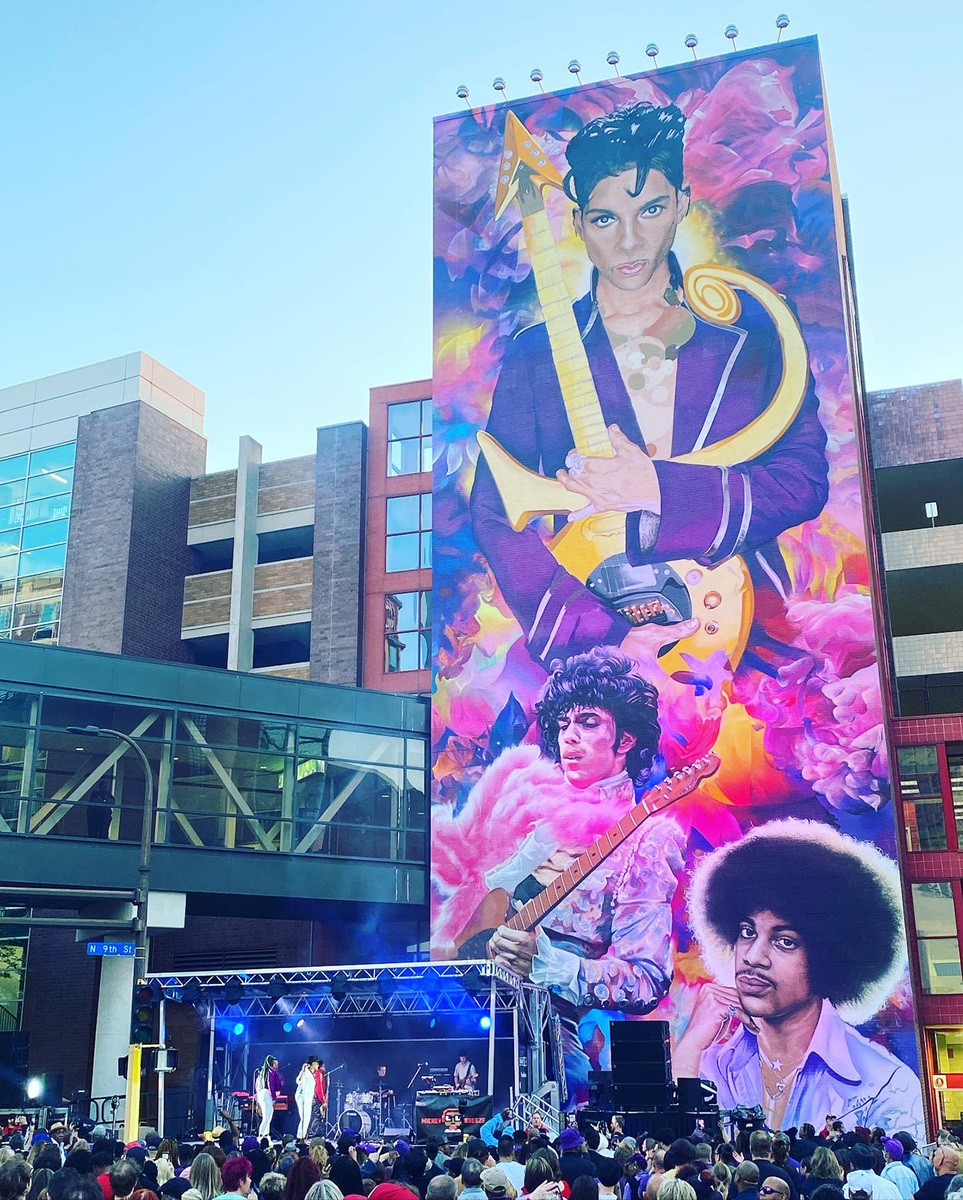 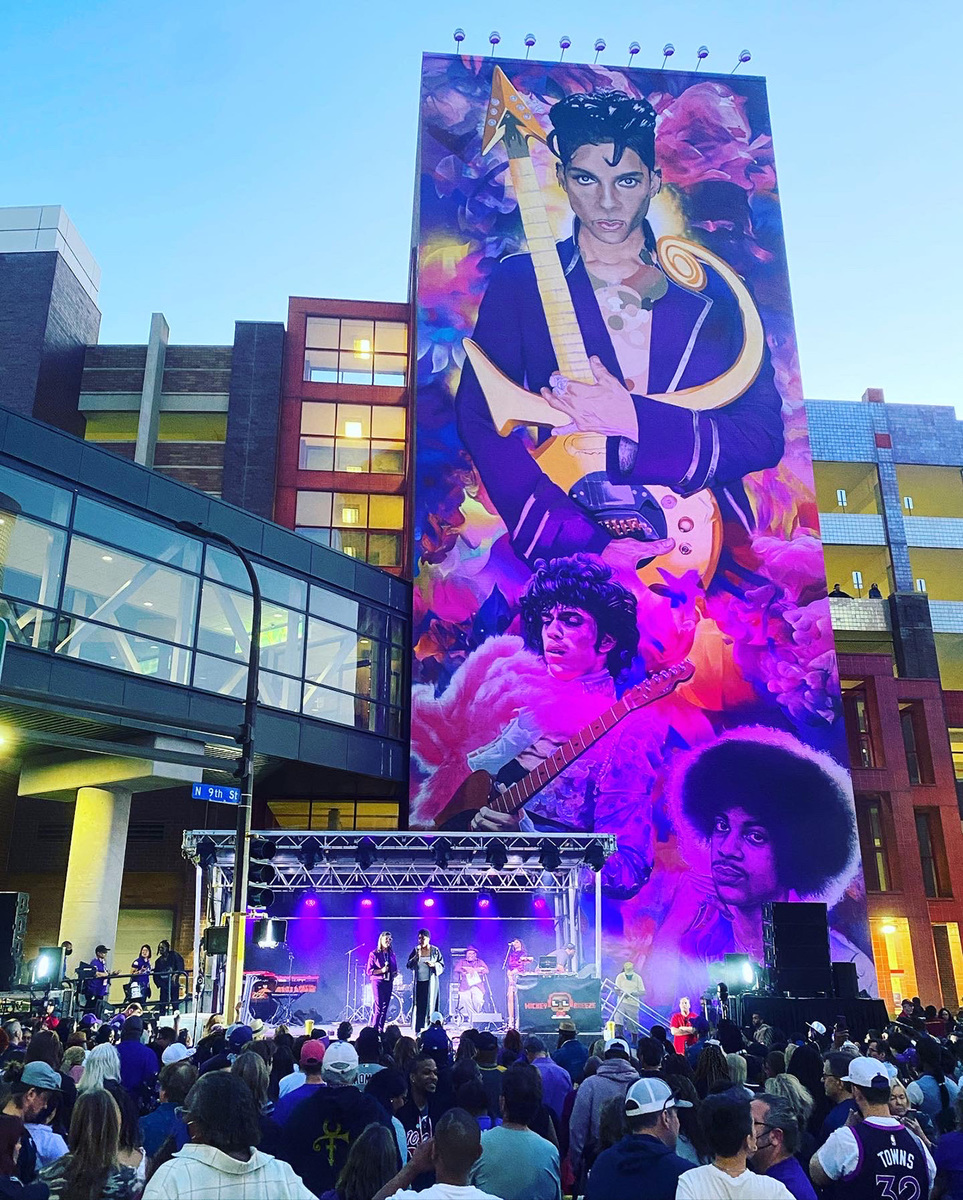 A major mural unveiling took place in downtown Minneapolis recently—heralded by a weekend of celebratory events—when a new 100ft high artwork of Prince, featuring three shots of the Minneapolis musician, was revealed for the first time.

This $500,000 ‘Crown Our Prince’ project, as it is known, has been under development for seven years, with the mural undertaken by Florida street painter Hiero Veiga.

For the Purple block party to coincide with the reveal, local company Slamhammer Audio were brought into handle production, including the sound reinforcement. Having been a loyal customer of Martin Audio for the past two decades, they fielded a combination of eight Martin Audio W8LC Compacts, eight WS218X subs and a pair of W8LM Mini for front fills. For delays—set at the FOH position, and shooting back towards the rear of the crowd—they turned to a pair of Martin Audio CDD-LIVE and CSX-LIVE118B subs.

The reveal party was a free event, which brought several thousand people flocking to downtown Minneapolis’s Ramp A on a perfect evening. The timing was also appropriate as Prince would have turned 64 on June 7.

According to Slamhammer sales manager, Cam Dickison, from a production perspective the main challenge was the small footprint of the bandstand location, and the timing that they had to work within—since the street could not be closed during the day. “With the stage itself needing to be constructed in a very small area, we opted to build sound wing platforms and mounted the PA on those instead of rigging from the stage,” he said.

However, the night had been “full of love, joy, and even some tears” he confirmed, with special appearances from both of Prince's sisters and performances from Prince cover band Dr. Mambo's Combo as well as DJ Mickey Breeze. The event was hosted by Chantel Sings and Walter ‘Q-Bear’ Banks, and the whole event was live streamed.

In conclusion, Cam Dickison said, “We love working with the Prince Organisation and honouring his legacy while showing the world that Minneapolis is more than just a fly-over city.

“We have done multiple events with the Organisation and the Minneapolis Downtown Council over the years, including the ‘Prince Live on the Big Screen’ events. These are the two main forces that turned this Prince mural and block party dream into a reality.”

The technical crew also managed to pull off a challenging task, he said. While Dr Mambo’s Combo brought in their own sound engineer, Slamhammer’s Brian Scocchera was on monitors, Matt Fradley mixed FOH for the rest of the show and Mack Swanson was behind the lighting desk.