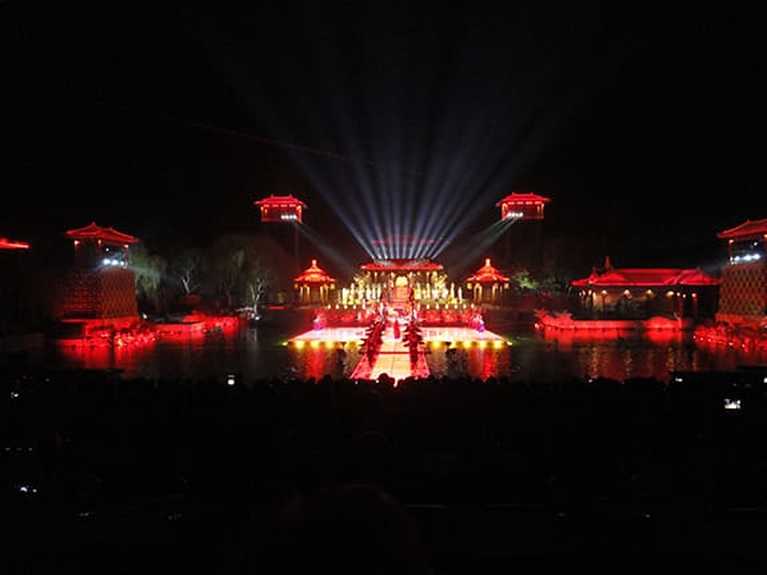 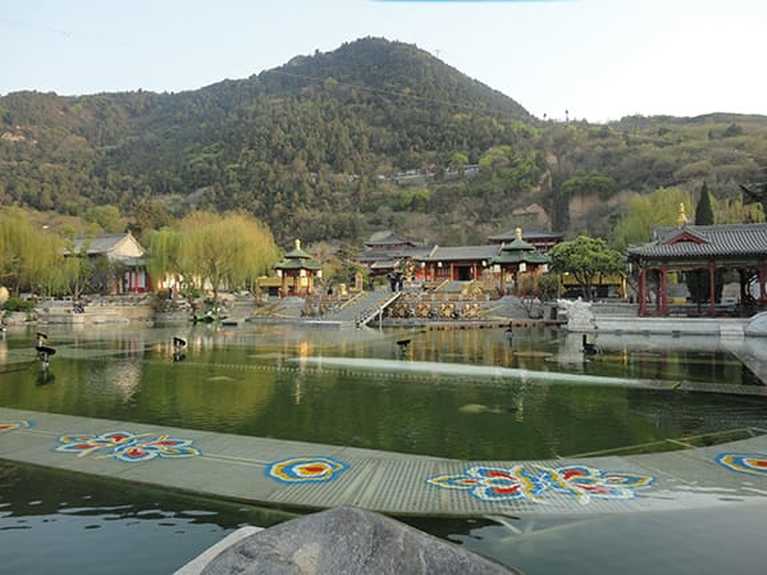 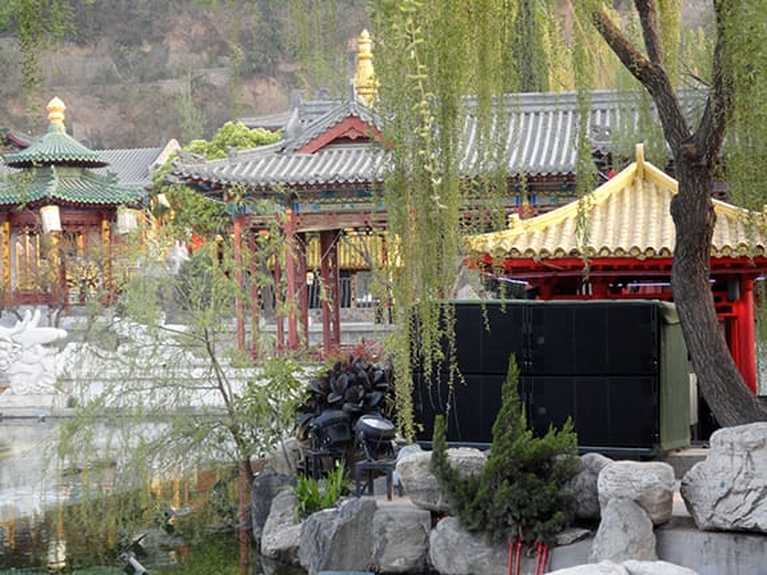 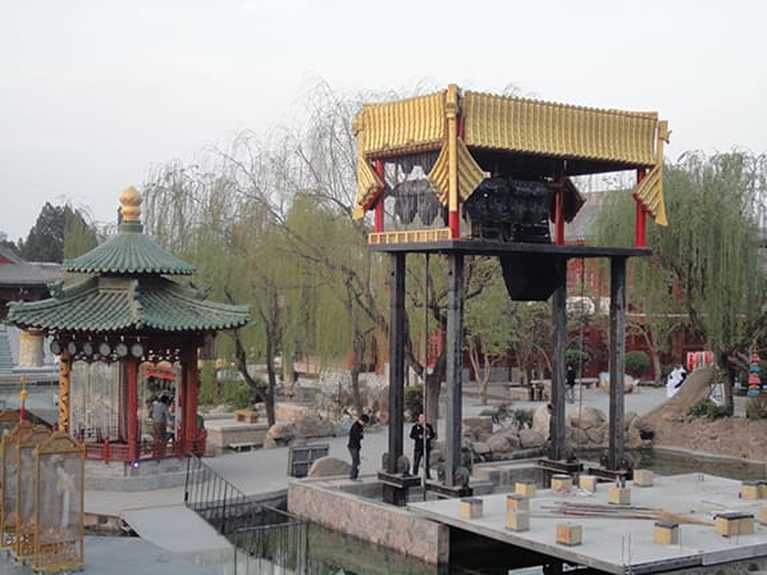 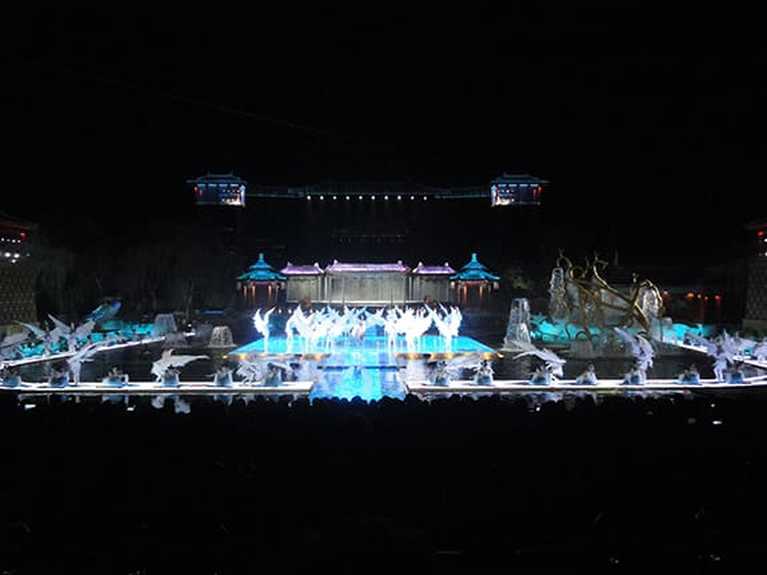 'SONG OF EVERLASTING SORROW' WITH MLA IN CHINA

'A fat lady takes a shower outside'. Or the story of how MLA became the crowning glory to a masterpiece in Chinese theatre.

There are numerous funny Chinese to English translations to be found; a quick online search is testament to that. But since my Chinese only extends to a few catchphrases and recently was my very first venture to China, I am always respectful of those that have tried harder to grasp languages than myself. That being said, one shorthand description for a production I was to see later in the day certainly didn't give justice to what I was about to witness.

'Song of Everlasting Sorrow' is an outdoor theatrical performance in Xi'an, China. On enquiring about the nature of the story, I was promptly told it was about a famous Emperor's fat concubine who took a shower outside. Somewhat bemused, I awaited the official show guide to find out more whilst at the same time wasn't exactly sure what I should expect to see from the production.

The reason for seeing the show was that the production had just recently upgraded their sound system to MLA. The previous system from another manufacturer had given rise to multiple problems including sound bouncing off the lake that made up the majority of production stage, to inconsistency and intelligibility across the audience that was 100-130m away from the speakers. Sounding like a classic job for MLA to solve, I was at least keen to hear how it faired.

Well darn me, if I didn't turn up to the production thinking that I just entered a big movie set. Against the backdrop of Mountain Li - which would be spectacularly lit up by well positioned lights - Nine-dragon Lake sprawled across the expanse below, filled with gantries and a mechanical stage that elevated out of the water, whilst pavilions, halls, colonnades, and weeping willows adorned the splendour. The drama presented magnificent pictures of imperial temples, sparkling skies, rolling fog and brightly burning flames, whilst a massive LED screen added yet more dynamism to the production which also featured 300 performers singing, acting and dancing.

This was evocative of the major set pieces from the Beijing Olympics, when the world stood in utter awe.

So quite possibly a little more to it than a large lady that takes a shower outside.

Time to get the real story.

The show is a spectacular dramatic interpretation of famous Chinese poet Bai Juyi's masterpiece, 'The Song of Everlasting Sorrow'. In the story, a Tang Dynasty Emperor (618-906), Li Xuanzong, falls deeply in love with a beautiful young concubine. He first encounters her at the Huaqing Hot Springs where Yang Yuhan, the 18-year-old concubine of Li Mao, one of the emperor's sons, caught Xuanzong's attention by bathing outside in the hot springs. Like most of the beauties during the period, Yang was a plump woman. Despite his son's protests, Xuanzong took Yang as his concubine. To please her, the emperor had the palace at Huaqing Hot Springs enlarged, building a Crab Apple pool where she could bathe and Yang spent hours there to keep her skin fresh.

Such was his devotion and love, it was said Xuanzong became distracted him from his ruling duties, causing unrest that led to a coup d'état, when rebels murdered his beloved.

The show is a visual triumph bringing out the drama and emotion of the story and dramatized in the location of Huaqing Hot Springs. The combination of a mechanical stage gracefully exiting from the water, Las Vegas inspired fire-effects, the latest high definition video projector, the largest 700 square meter LED foldable soft screen in Asia, and even an Italian fragrance emitting system, all made for a top class stage act.
But what about the sound, I hear you cry?

Well, the first thing to talk about is the very unique installation of the MLA system. An eight aside hang was suspending from mechanical towers that elevate from the ground 30 metres in the air. Like everything else in the production, when not in use, the system is submerged below ground level. The four aside MLX subs were ground stacked closer to the audience and nattily dressed in green tarpaulin to blend in with their surroundings.

Listening to MLA always brings a smile to my face. It's just the combination of power and clarity that makes the heart beat that little bit faster, and in this case truly draws you into the majesty of the production. With hard avoid optimised on the lake, reflections were not an issue, and the combination of Display2.1 TM software and on-board DSP processor provided highly accurate consistency of sound across the venue. Equally, given the outdoor nature of the show, the ability to cope with constantly changing environmental factors by adjusting the vertical angle of coverage electronically, without having to re-rig, is also a big plus.
Given the magnitude of the production, it is understandable how the previous sound system had proved an unwanted distraction. What was equally clear was that everyone involved in the production now had beaming faces and a real sense of pride in the new system. Sincere congratulations to our distributor, Budee, who won the contract and installed the upgrade: this is exactly the type of project that helps further the Martin Audio brand in China and helps makes the case for MLA in theatrical productions worldwide.