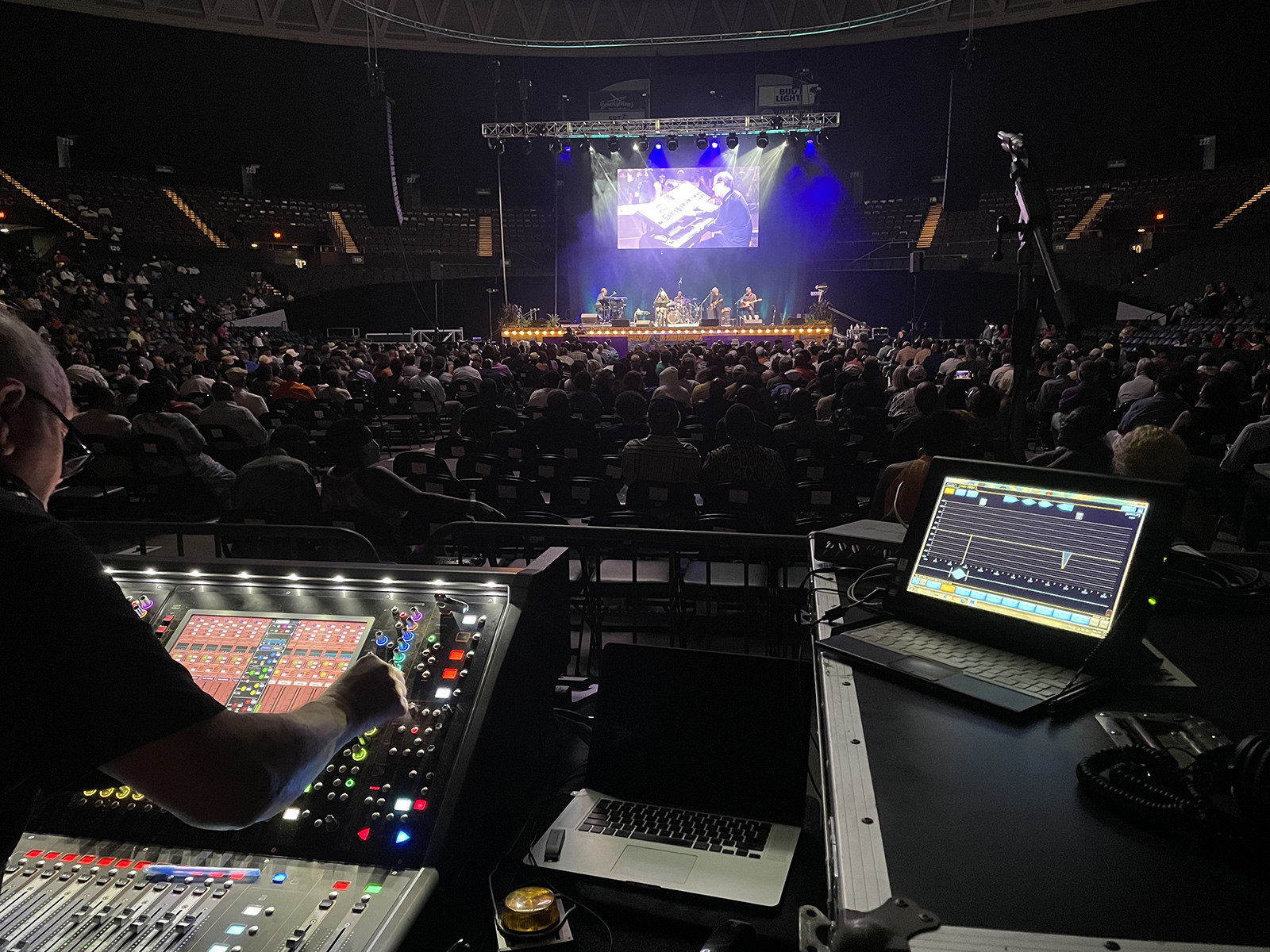 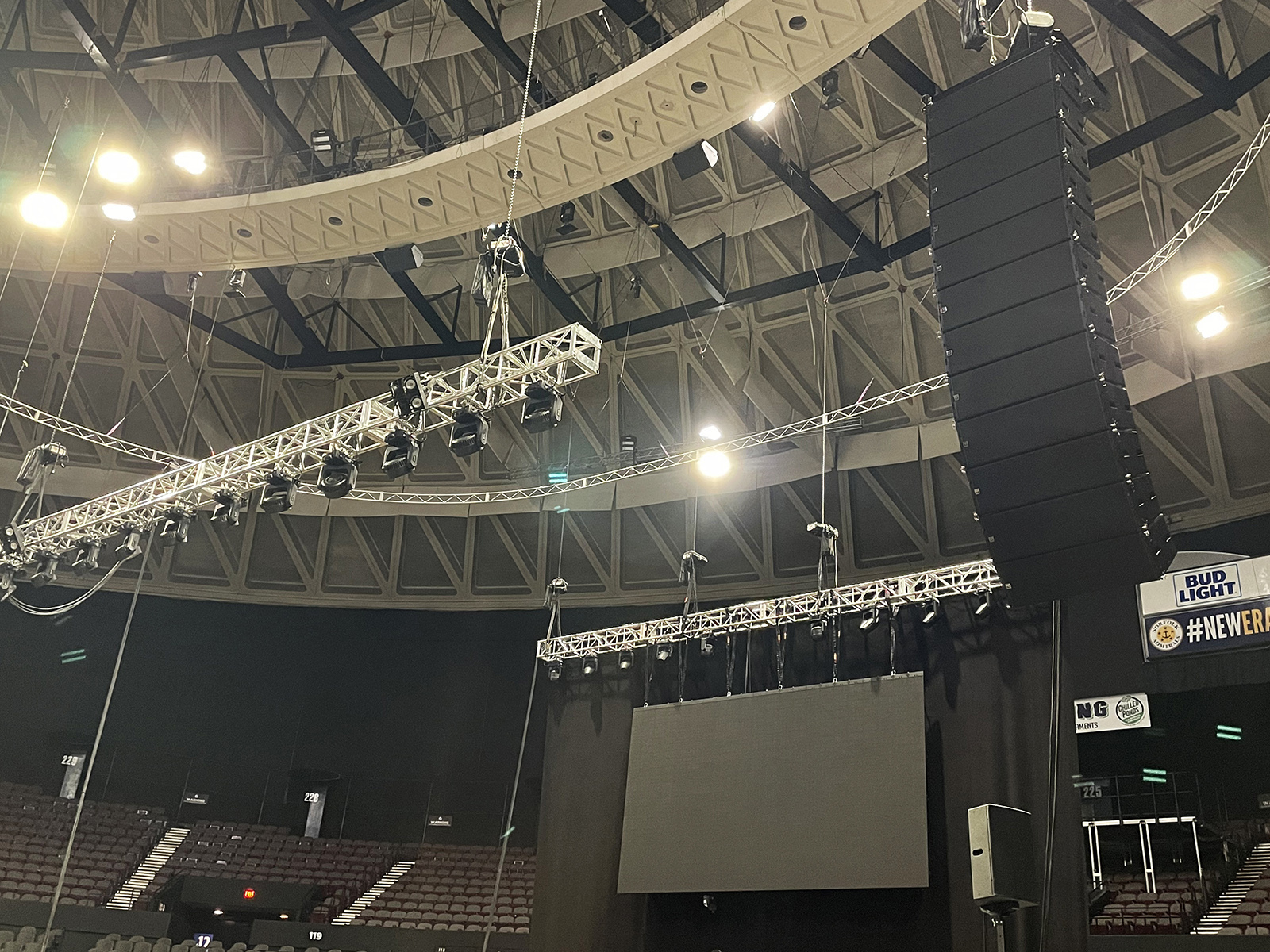 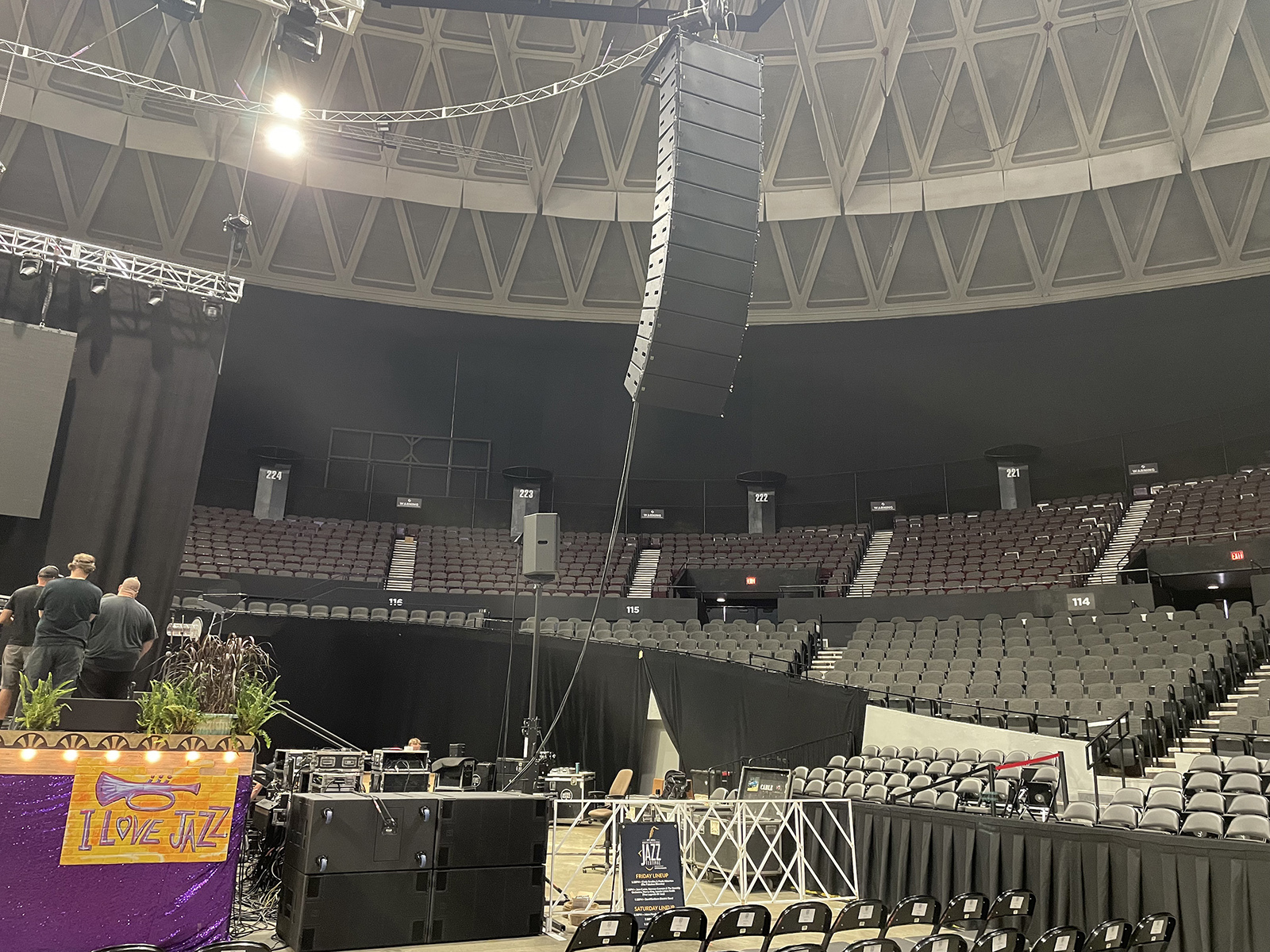 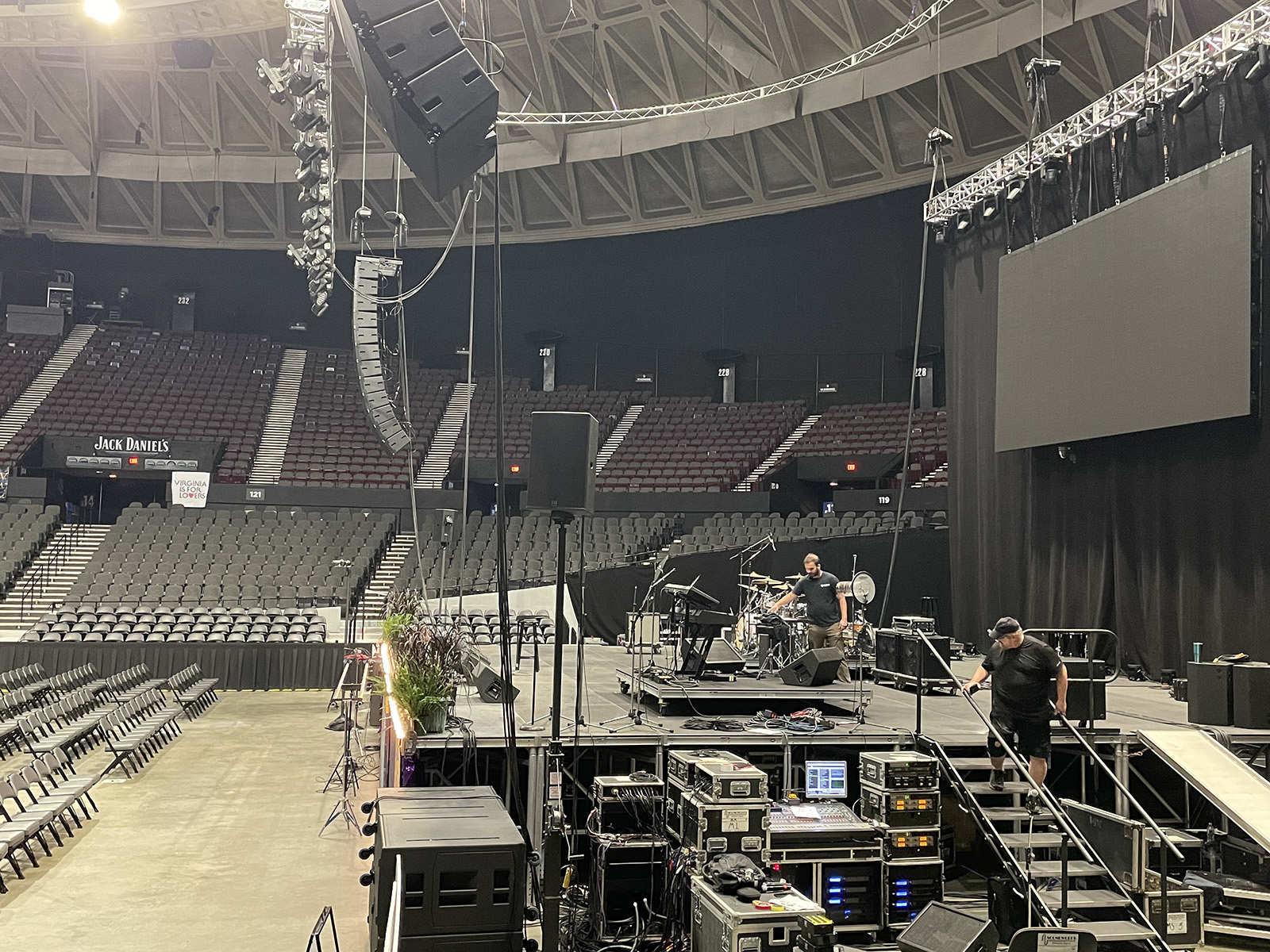 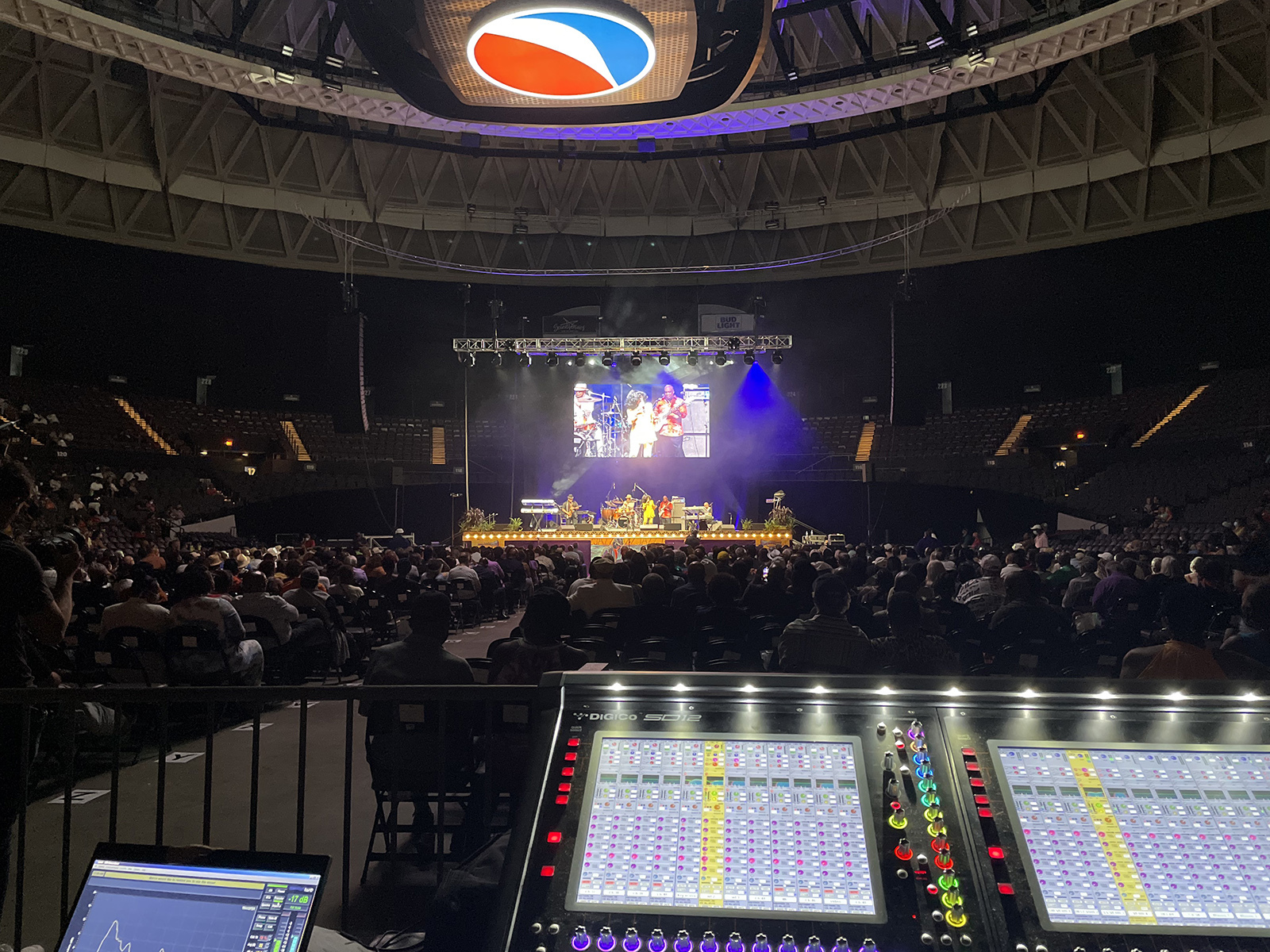 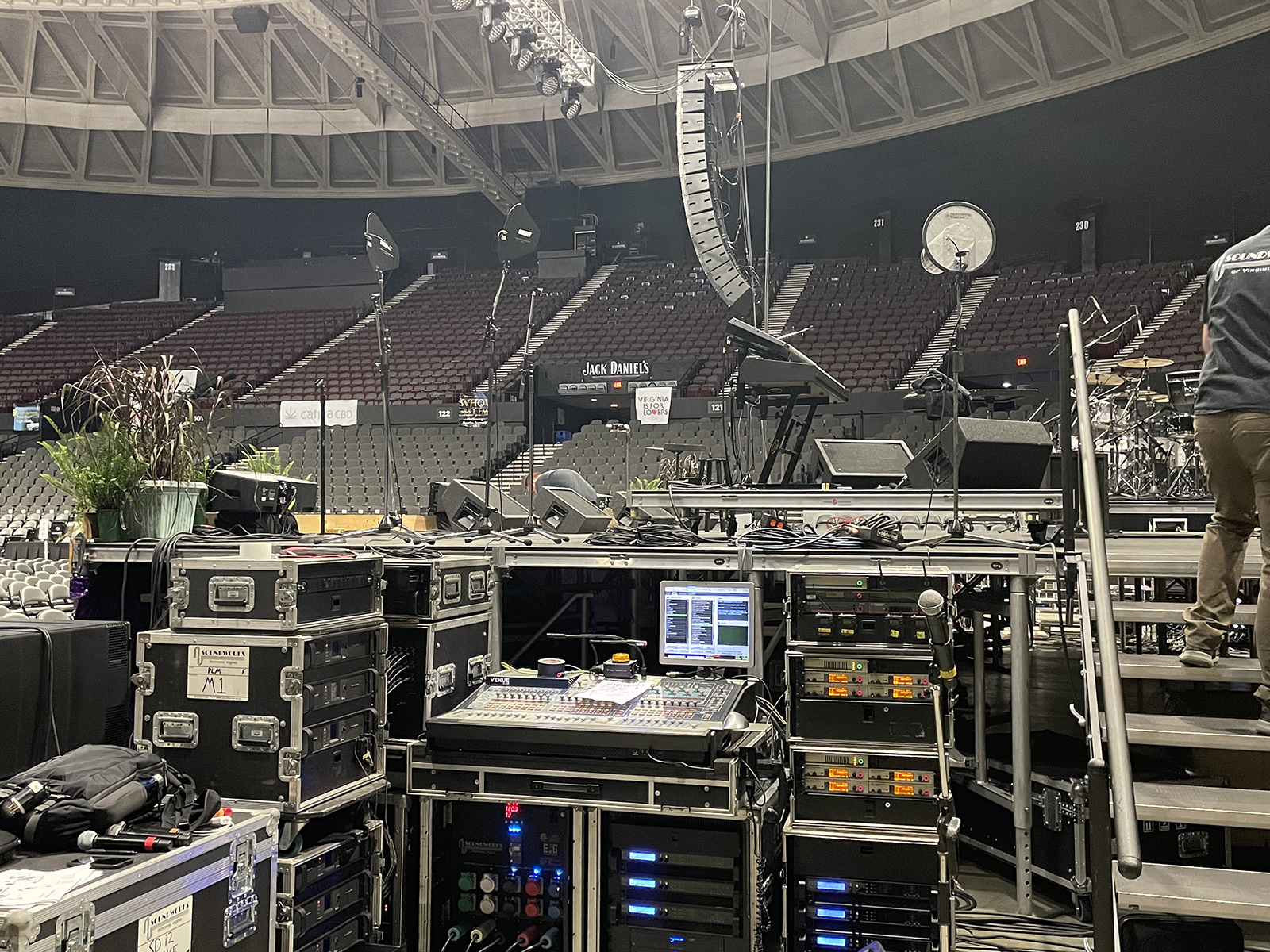 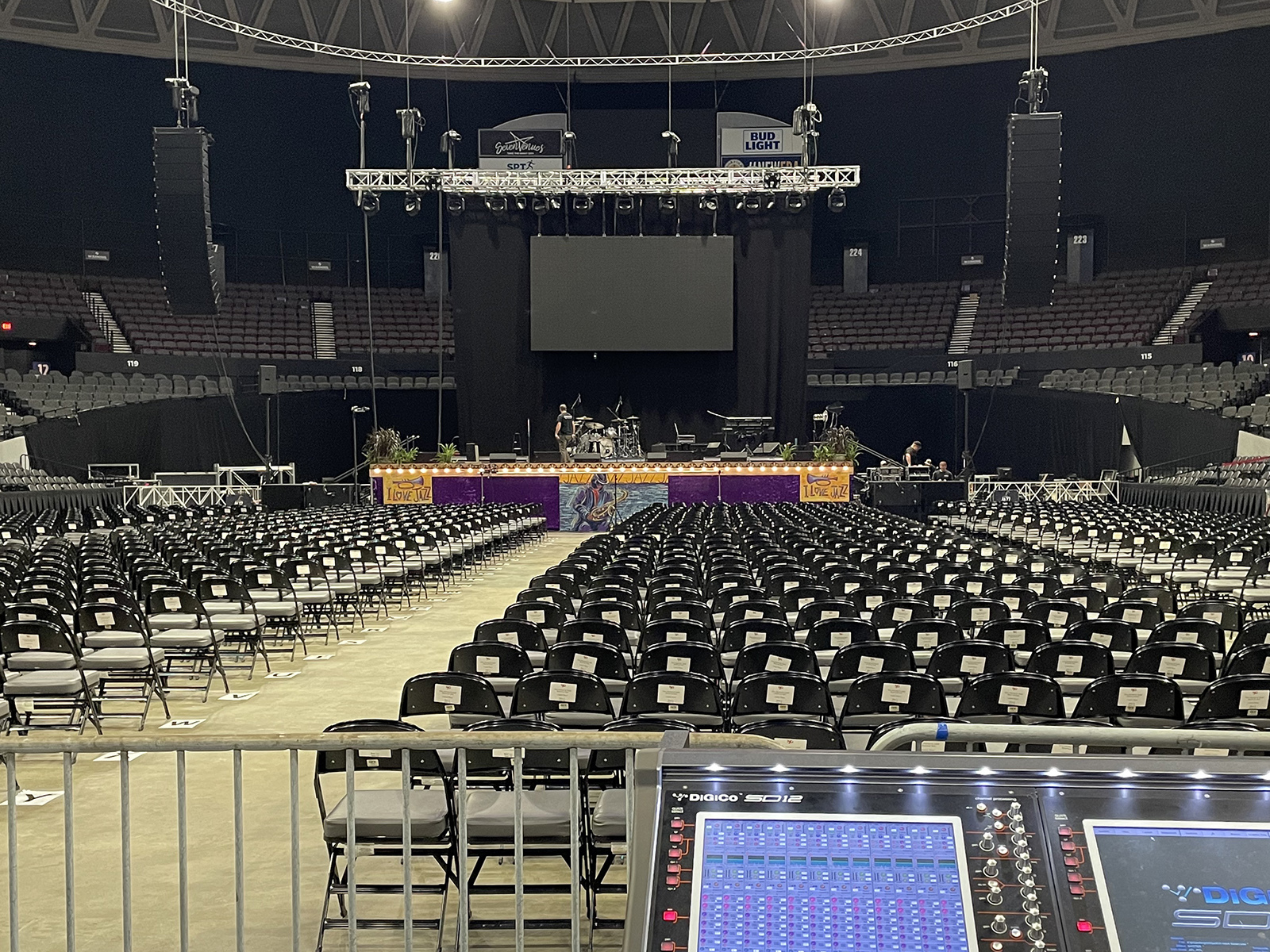 Local service company (and Martin Audio partner) Soundworks of Virginia have been providing sound services for this, and many other events promoted by Festevents in Norfolk, VA over the past decade.

Historically the client has asked Soundworks to set up systems at the Town Point Park, along with a ‘back up’ system indoors at the multipurpose, 11,000-cap Norfolk Scope, so that in the event of sudden bad weather they had an indoor option ready to go. “This year it was obvious the weather was going to be bad the entire weekend, so we just set the system inside the Norfolk Scope,” reports company President and Senior Engineer, Grant Howard.

Generally used as a sports arena, the room was configured for 7,500 seats, with the stage and PA at the far end.

“The Scope’s audio challenge, as with many of the huge concrete dome buildings, is that the reverb time is quite extensive, especially with the low mid and low frequencies,” he reports. “We did our best to equalise the challenging frequencies out of the room without totally sucking the life out of the music.”

In view of the height and weight limitations in the Park, they would typically fly eight WPC elements per side. “However, because we moved inside, we were instead able to fly 12 [of the larger] WPL per side so we could get great coverage throughout the venue.” To this they added four SXH218 subwoofers per side, ground-stacked under the hangs. Using a cardioid pattern they achieved sufficient rear rejection to keep some of the low end from reflecting off the concrete wall behind the stage.

The system was run in 2-box resolution using Martin Audio’s iKON iK42 amps, largely because the other amp racks—necessary to have run it in 1-box res—were on the truck containing the outside system.

Meanwhile, a CDD-LIVE 15 on each flank added further outfill coverage, as Howard explained. “Seating was ‘general admission’, and people tend to creep out of the pattern of the main hang; therefore, the CDD’s did a great job of covering those seats.”

Soundworks had purchased the larger-format Wavefront Precision Longbow system (WPL) system—significantly more powerful in its componentry than the more compact WPC—back in 2019 as a major move to upgrade. This“We needed a larger box and a move away from a manufacturer who no longer supported their pro series speakers,” Grant Howard explained.

“We’ve found it does exactly what it claims—coverage throughout the audience area is smooth and consistent and the rigging is simple and easy to handle … and goes up quick.”

Soundworks’ Senior Engineer certainly has plenty of experience in optimising the proprietary DISPLAY software. “I used the Hard Avoid function to keep as much of the PA off the stage as possible. The musicians find it challenging enough with the room reflections, so the Hard Avoid helps eliminate one more sound source from adding to the confusion!”

Wavefront Precision generally proved a hit with visiting sound engineers. “A couple of them were already familiar with Martin Audio and were pleased with the end result, especially with the room being such a challenge,” notes Howard. Other artists playing through the PA included the True Legends of Jazz, The Fabulous Blondes, Spyro Gyra and the duo of Adam Hawley and Jackiem Joiner.

In summary, the Soundworks President reports that the only band able to achieve a full soundcheck had been David Sanborn on Friday “and it sounded great,” he enthused. “The Saturday bands were flying in after doors, so it wasa ‘throw and go’ situation for them.

“But after a couple of songs, and getting a handle on the room, they all had a great show.”