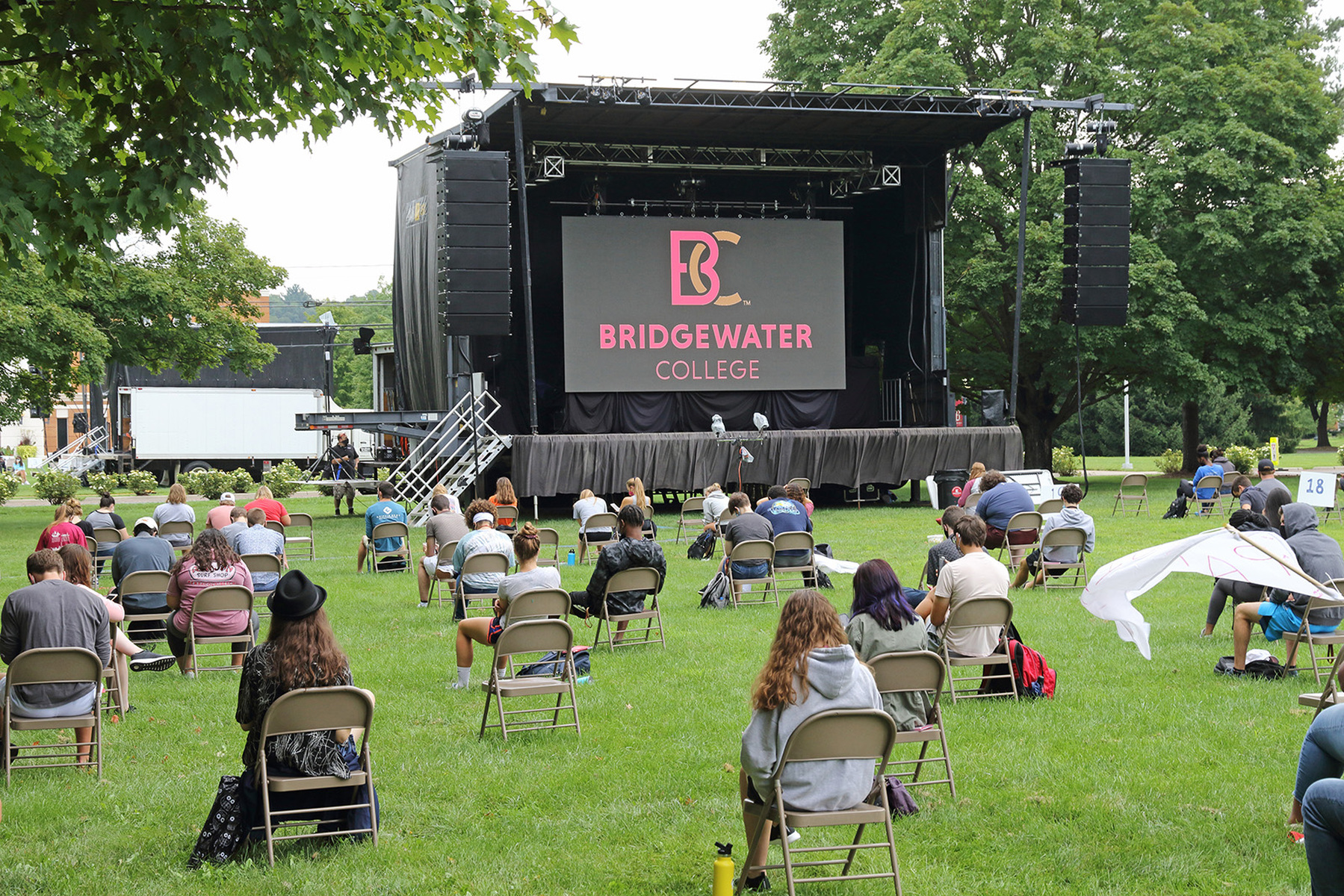 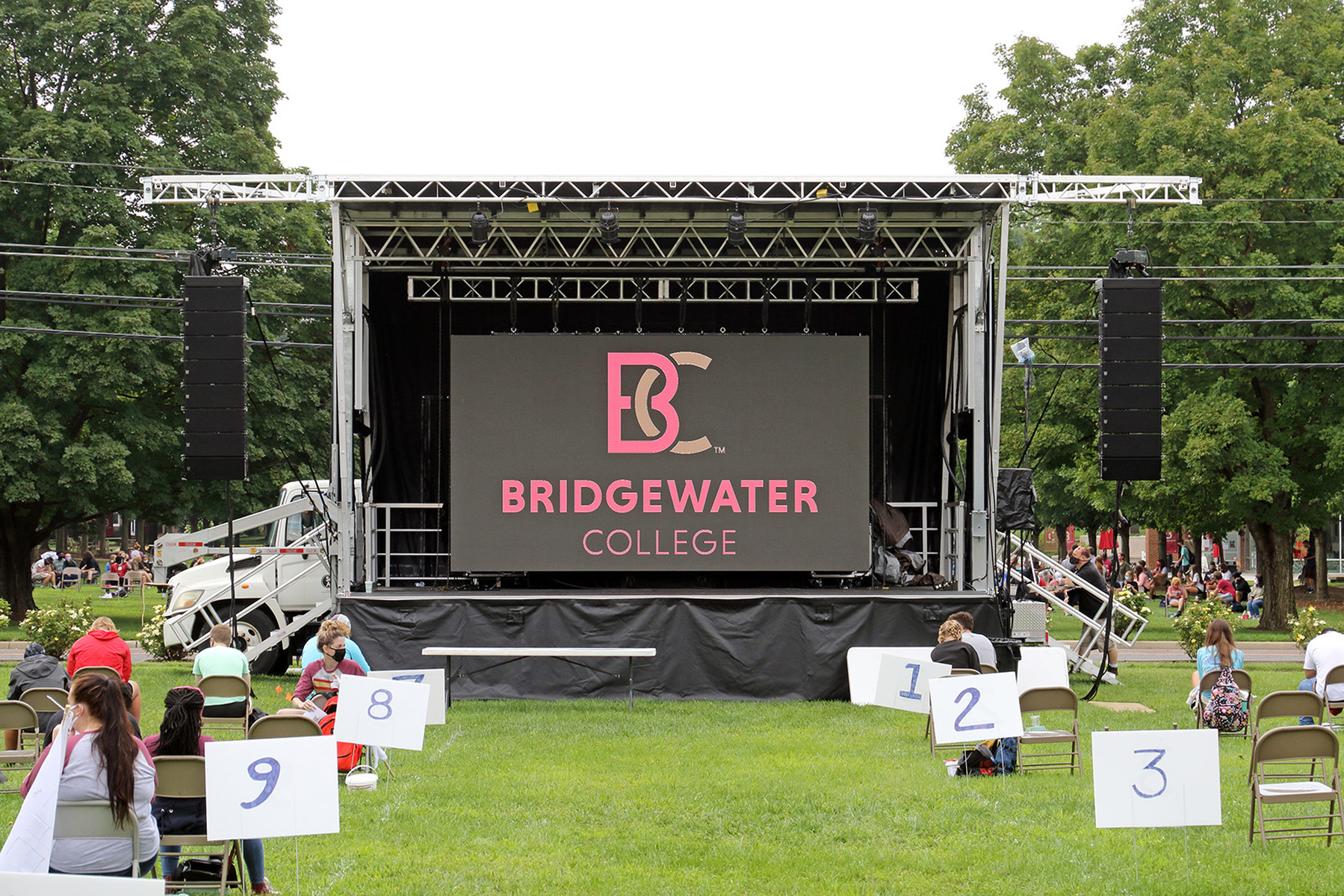 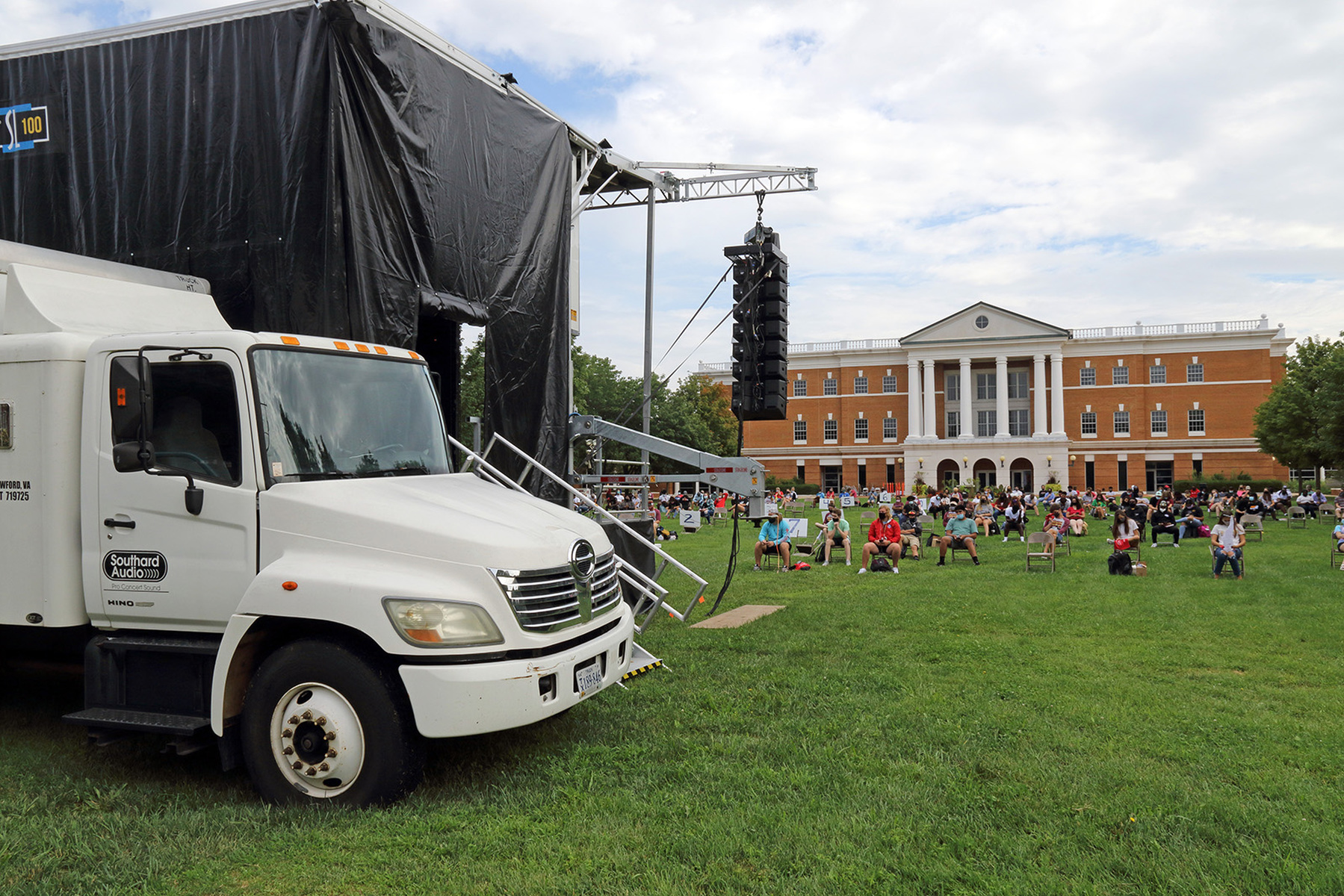 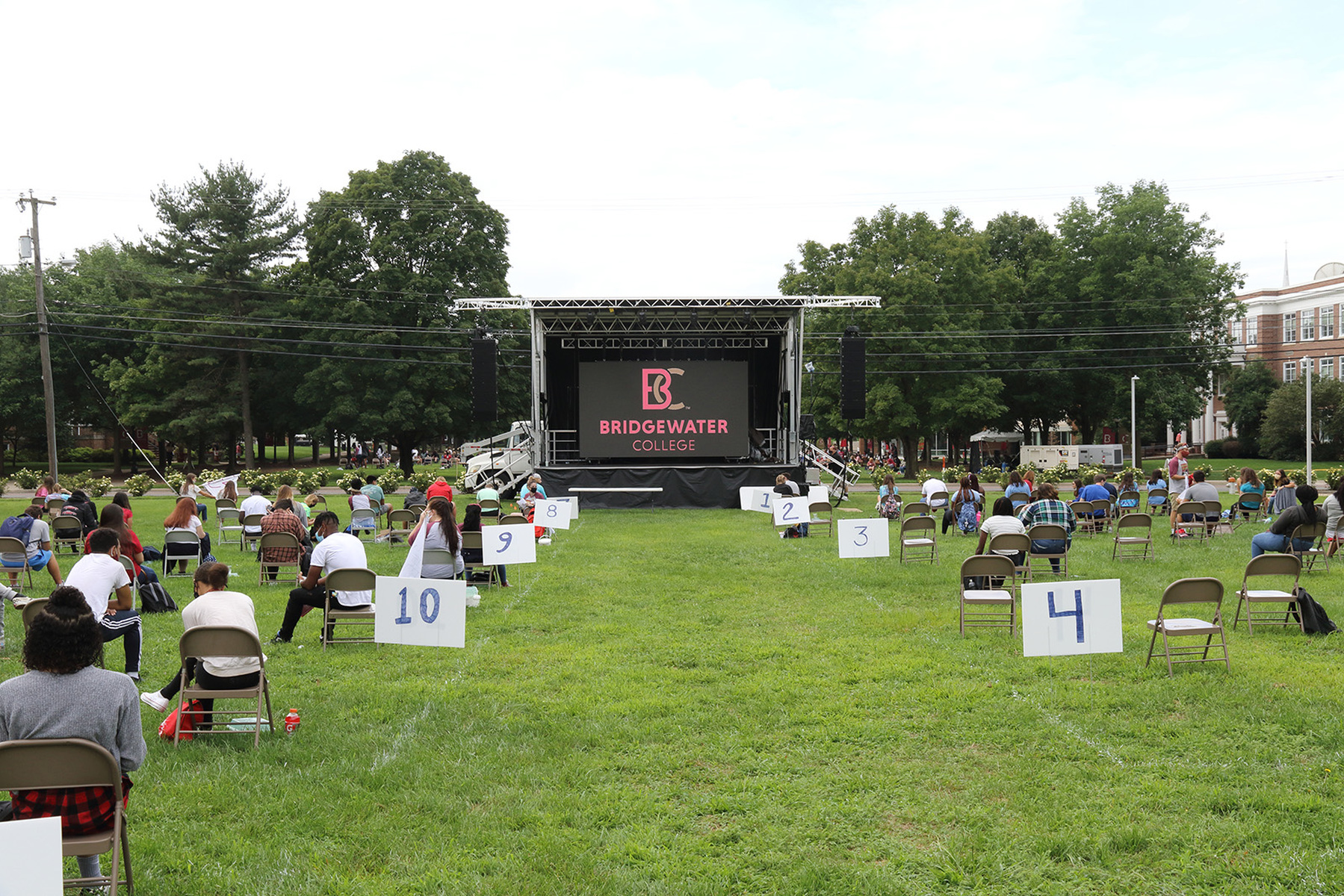 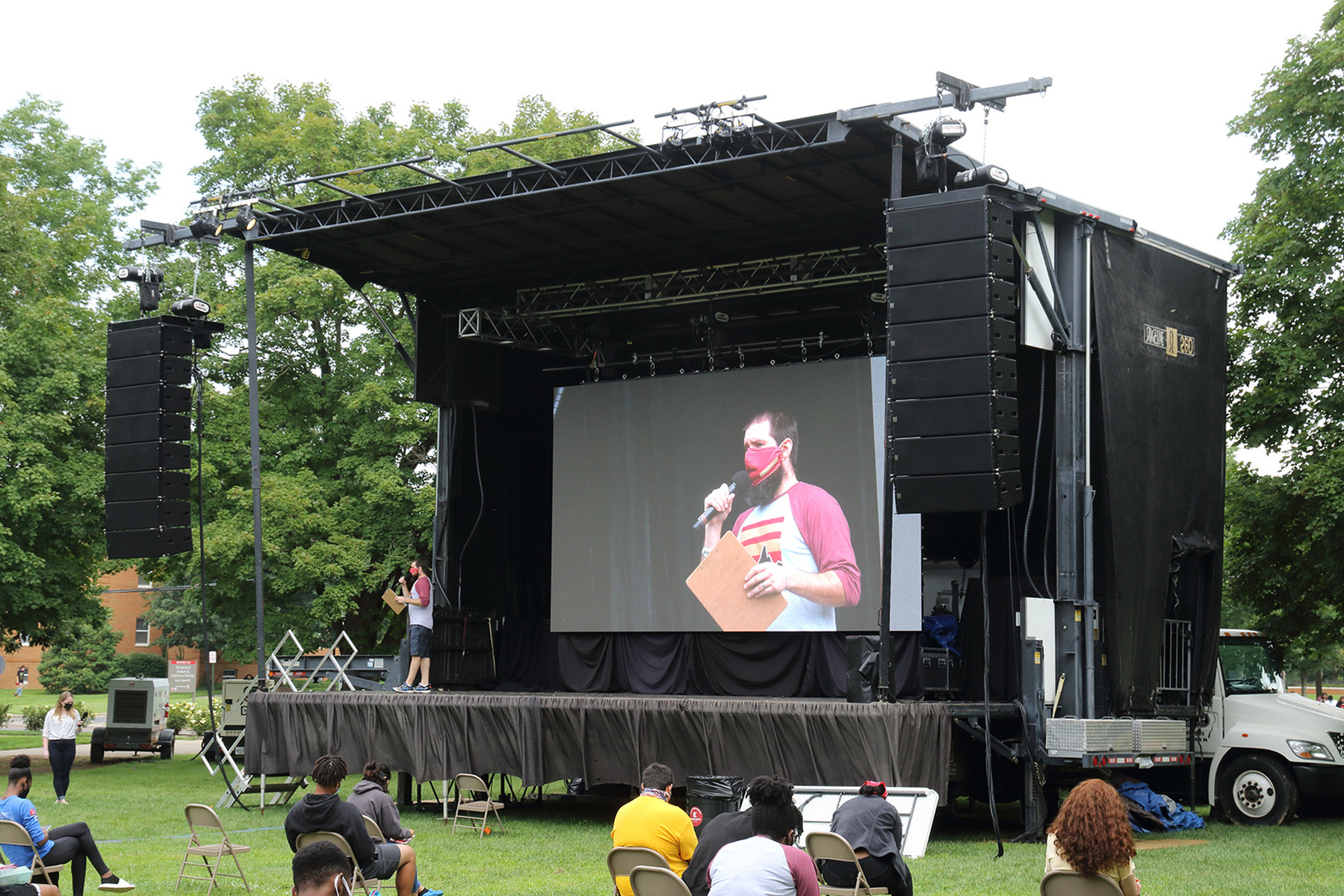 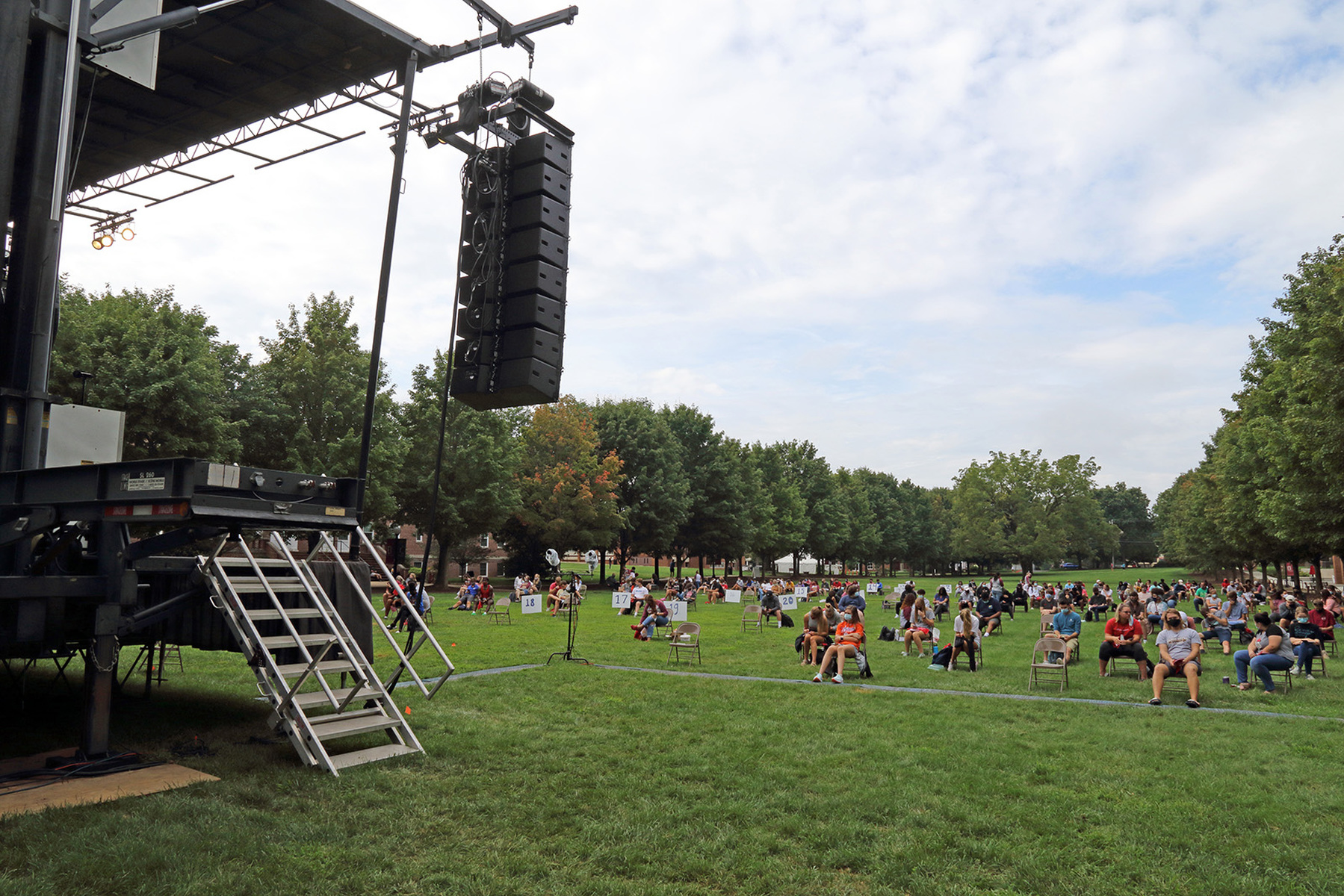 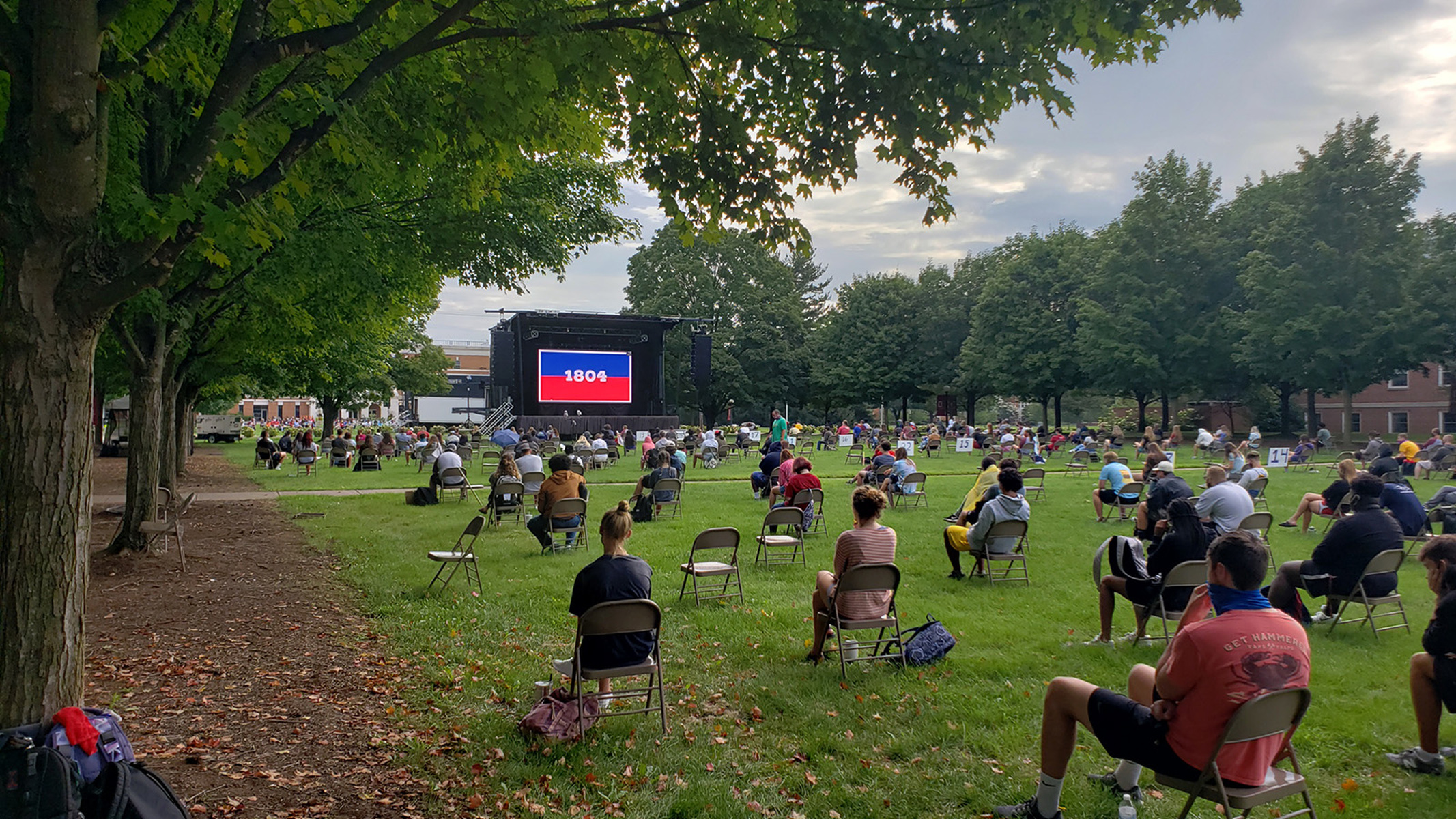 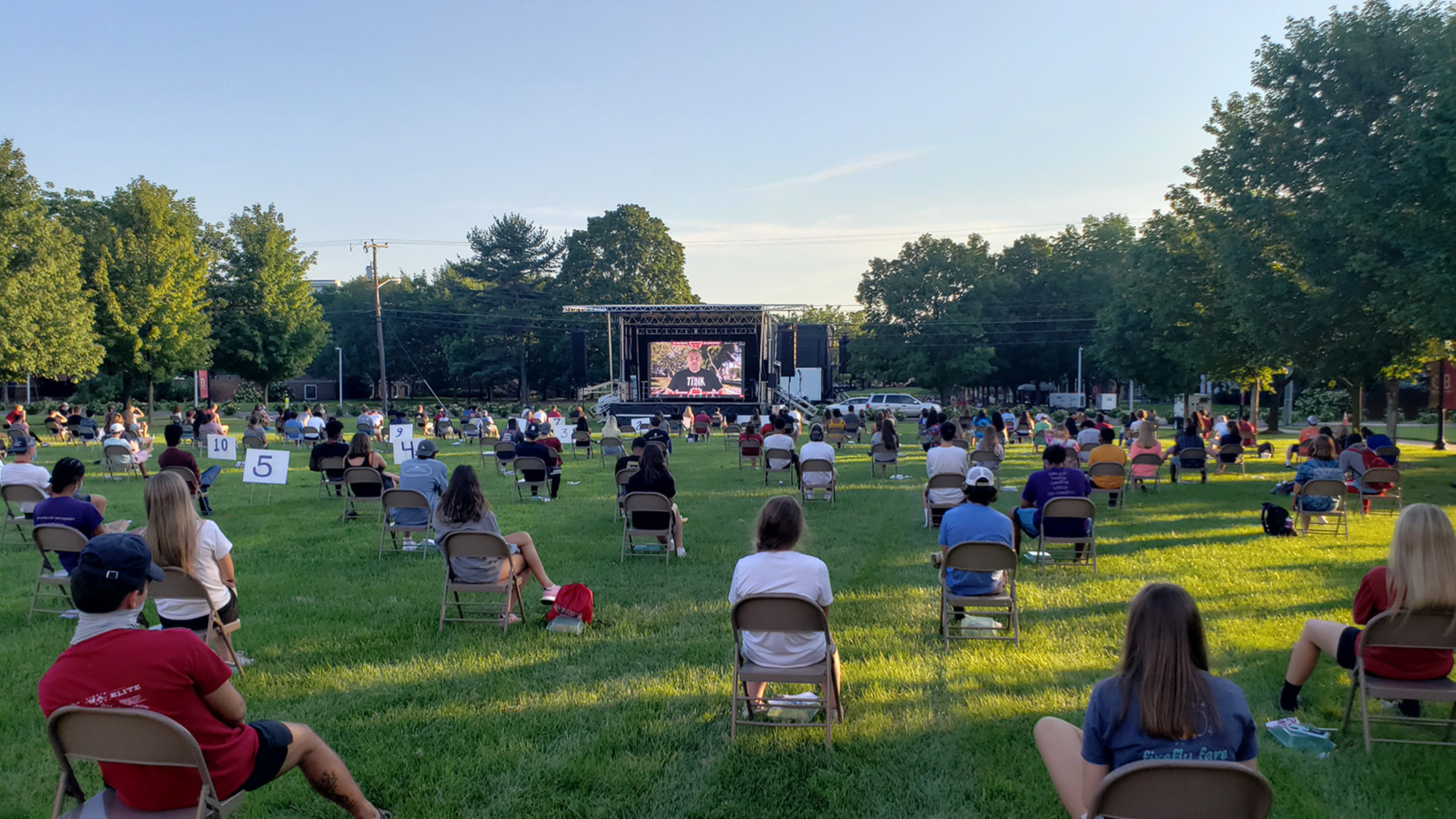 Servicing a wide range of events in the mid-Atlantic region, Southard found much of their workload in the surrounding East Coast states cut off after COVID-19 struck … and even in the academic sector—a market segment in which they are usually particularly active—the normally busy Orientation Events week was virtually wiped out.

One that did go ahead, albeit under heavily moderated conditions, was Bridgewater College. The presence of COVID-19 meant an enlarged role for Southard at this Liberal Arts institution, as the students were divided into pods and the classrooms were moved outside onto two large grassy spaces providing plenty of room for social distancing.

Each of the two back-to-back main stages contained a pod for 250 students, with a road running between, respectively serviced by Martin Audio WPL and WPS rigs. However, it was not without its challenges.

Southard Audio managing partner and operations manager, Jason Misterka, noted that the College wanted to avoid either of the stages feeling like a ‘second stage’. “We used a wireless HD video stream to cross the street, and a wireless audio stream as a redundant, allowing announcements to be made locally from either stage,” he explained. “The internet hit the WPL stage and multiparty Zoom calls were shown on both large LED walls, with our video team mixing between local IMAG and the Zoom calls. Our video team also sent out a live stream of the event to the students who were attending virtually.” In non-COVID times, he said, the speaker deployment “would easily have covered 6000 people.”

Each hang contained eight WPL and WPS line array elements respectively.Each stage also contained a single array of three SXH218 subwoofers, while a CDD-LIVE 15 on each stage acted as a monitor, and two CDD-LIVE 8 in the back of the box trucks served as near-field monitors. Positioned on the stage itself (to keep dry and safe for the week), the subs were set up cardioid to minimize bleed; and since subwoofer content was a fairly small part of these events, and the back half of the stage was not being used by the client, it worked well.

The primary consideration had been isolating each stage. “We set the subwoofers up as a center cardioid cluster to reduce bleed on the stage itself,” Jason explained. “The WPL and WPS systems were set to ‘hard avoid’ [in the dedicated Display software] for the stage and behind, to prevent bleed between the stages.When standing in front of the PA on one side of the field, it was possible to tell that the other PA was active only by the slightest of reflections coming back at you, which was not a problem.” The signal source itself was largely spoken word with occasional music playback.

The goal had been to balance the even coverage with the amount of amplifier inventory required, Jason Misterka continued.“2-box res is usually plenty for open outdoor spaces. But switching to 1-box res for the WPS was certainly helpful in solving the problem.”

In addition to the outdoor locations, Southard Audio were also tasked with equipping the Gymnasium—used as a rain location—installing a stereo pair of CDD-LIVE15s and two SXH218 subwoofers.“We own four Martin CSX118B powered subwoofers but decided to use our bigger SXH218 subwoofers as it was a large room and they were useful for the dynamic bass in modern Hollywood movies [which were being shown as part of the presentation].”

All the prescribed precautions were taken against COVID-19andthe number of presenters permitted on stage was limited.“We had multiple wireless microphones sync on the same frequency, so presenters did not share individual microphones without a day or two between use.After each use, the mic was wiped down and the windscreen placed in quarantine.”

In addition, Southard’s LED wall tech had a control position at the back of the stage, behind the video wall and their audio tech was stationed in the back of the truck, using Martin CDD-LIVE 8 as reference monitors.The audio techs for each site also used consoles with wireless tablet control to be able to listen from in front of the PA as they wished.

Jason Misterka was satisfied that the design and application of the technical infrastructure had fulfilled all objectives in these difficult circumstances—largely thanks to the Display predictions—given the proximity of the stages and reflections off the other building.

Southard Audio techs on duty at Bridgewater College includedChris Davis, Matt Hudson, Chad Wyatt, and Cameron Triplett.Davis and Hudson were leads on their respective stages, and were also responsible for the Display predictions and deployment.