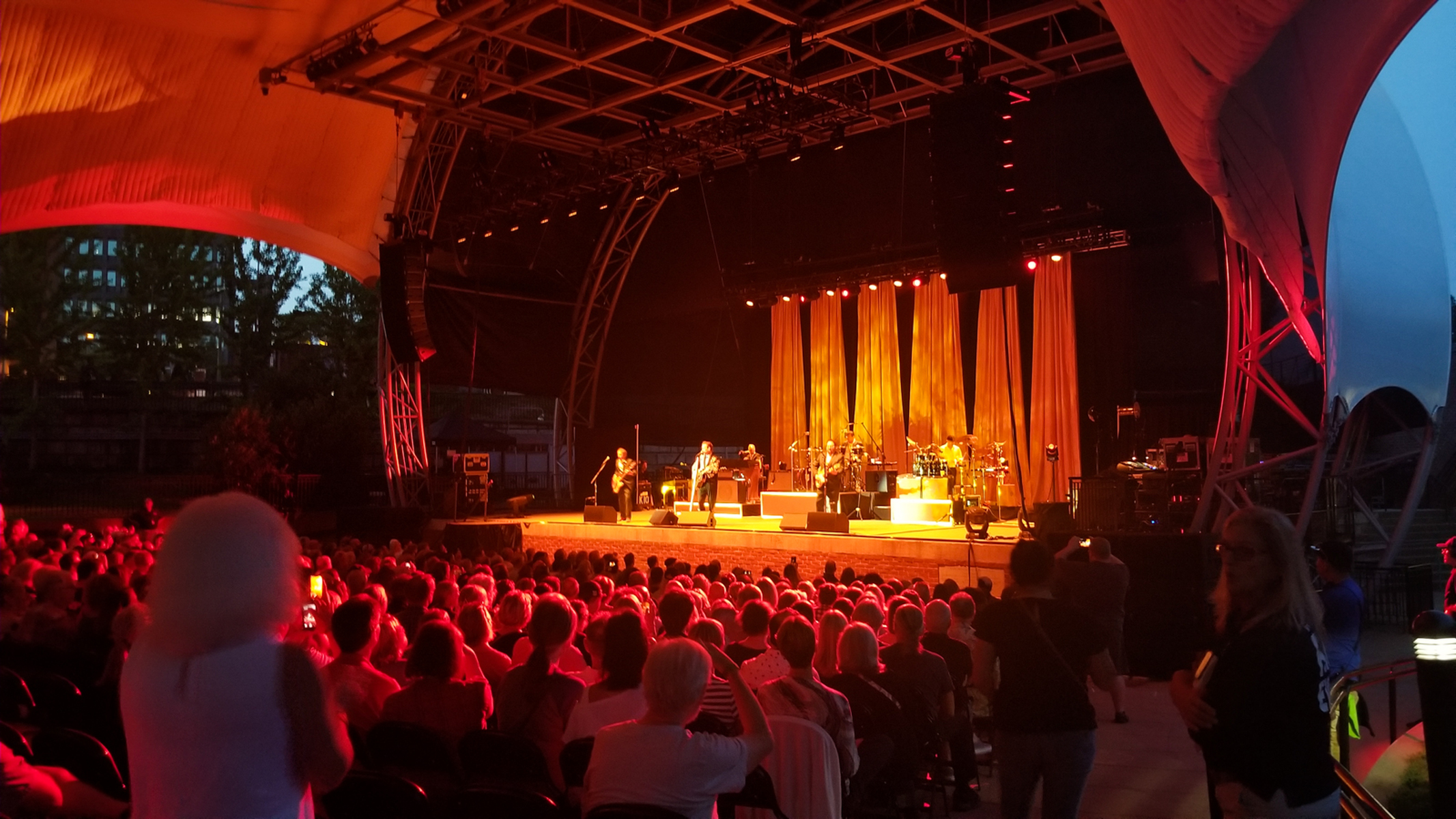 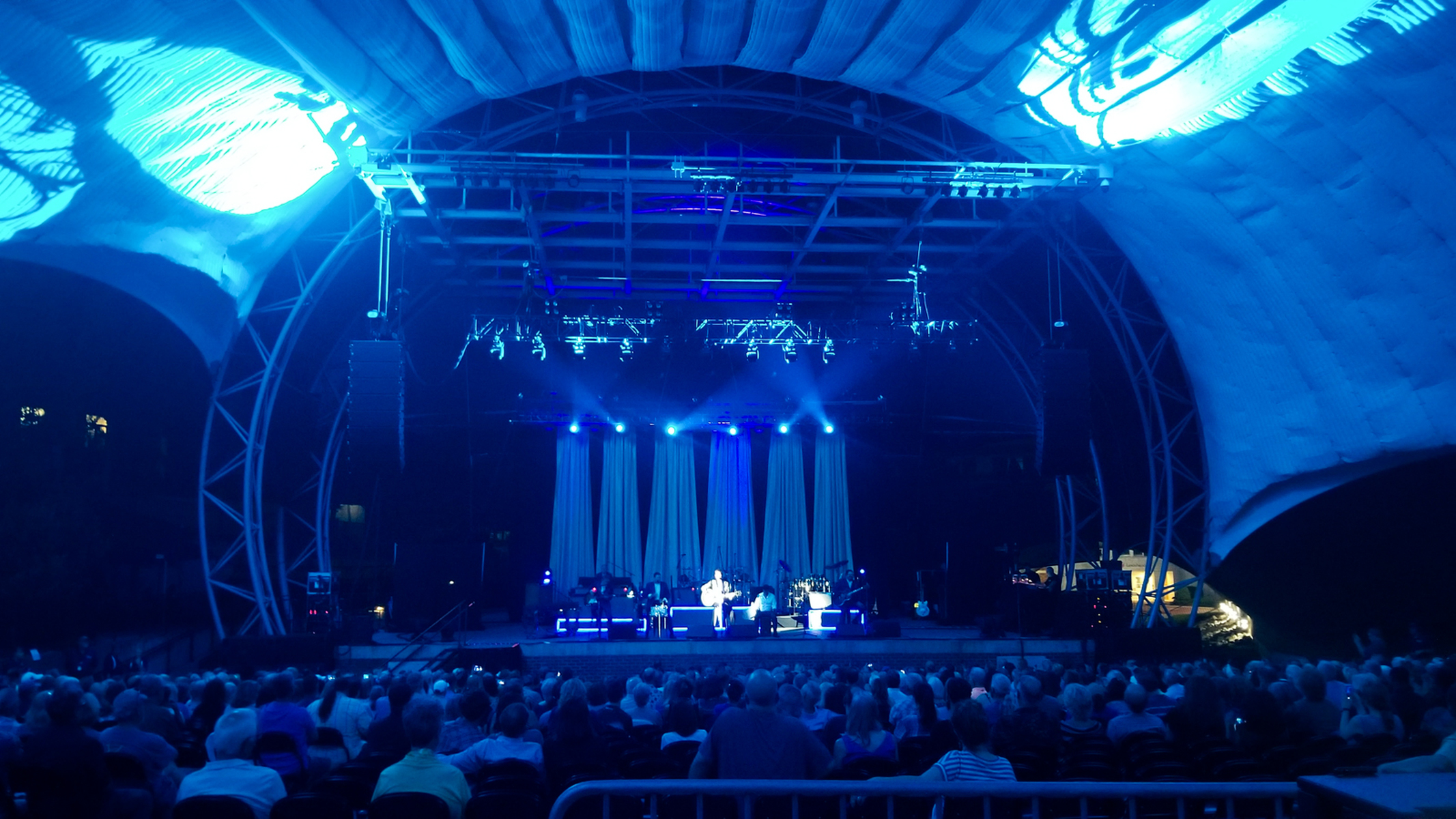 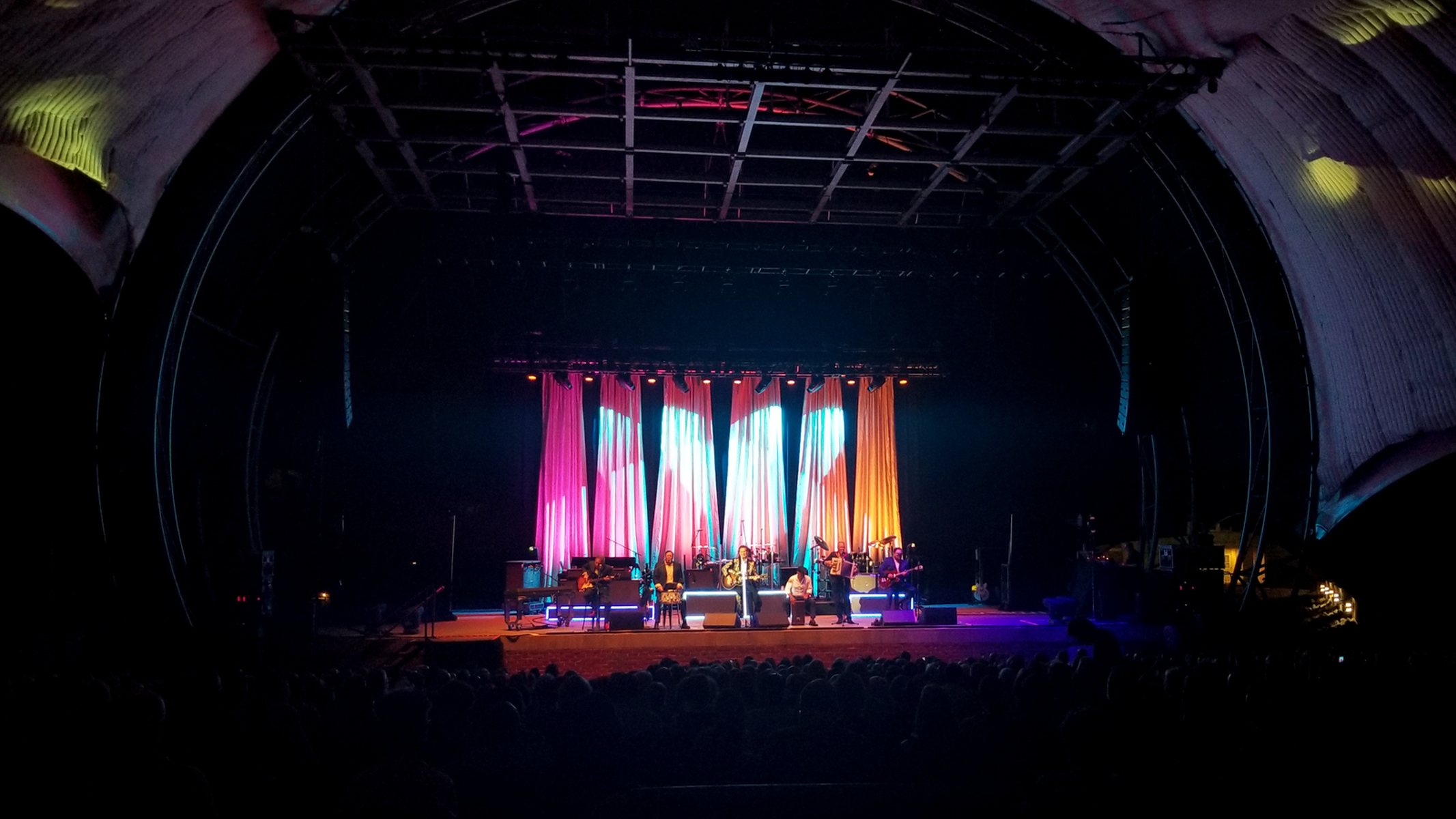 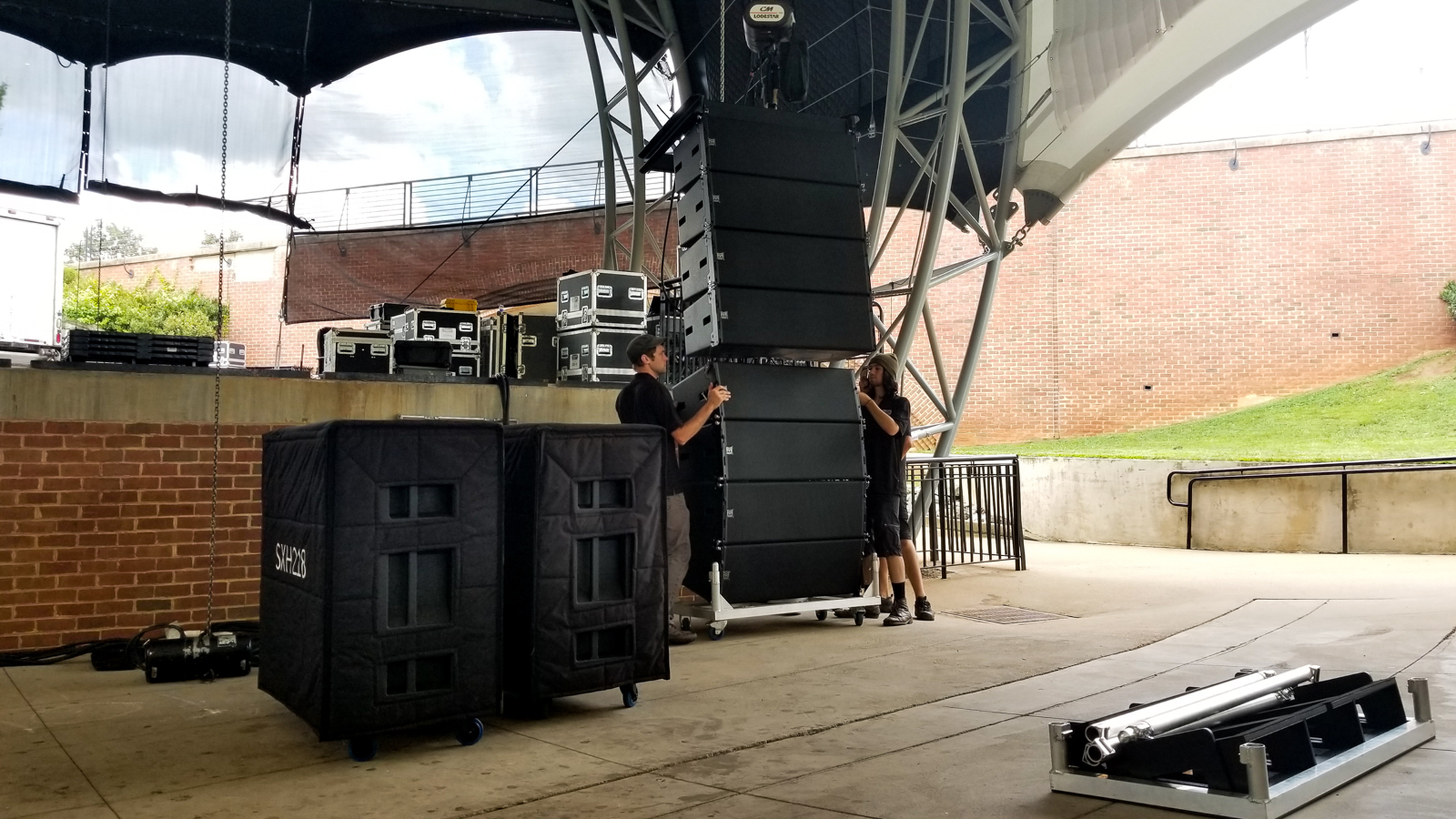 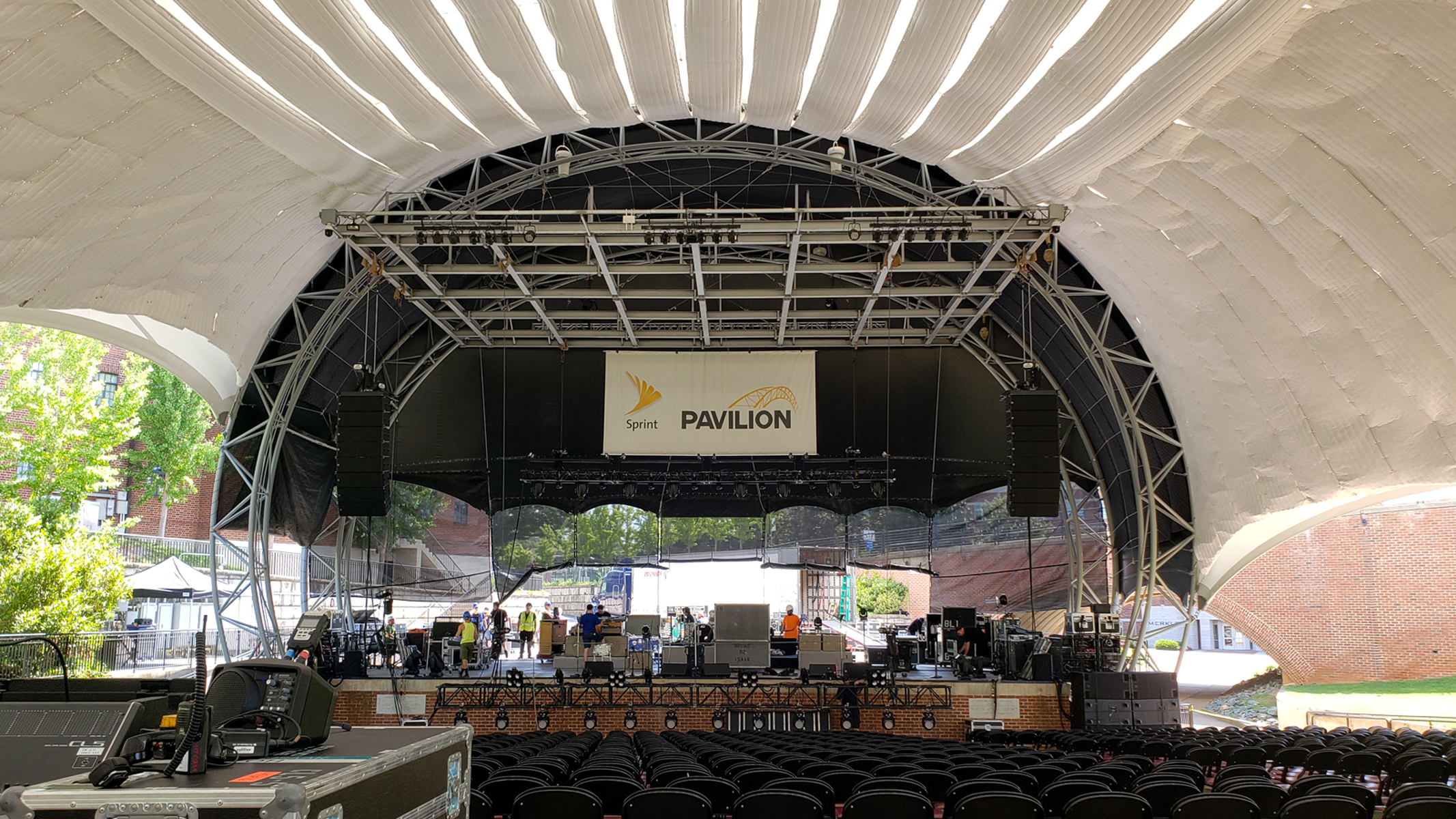 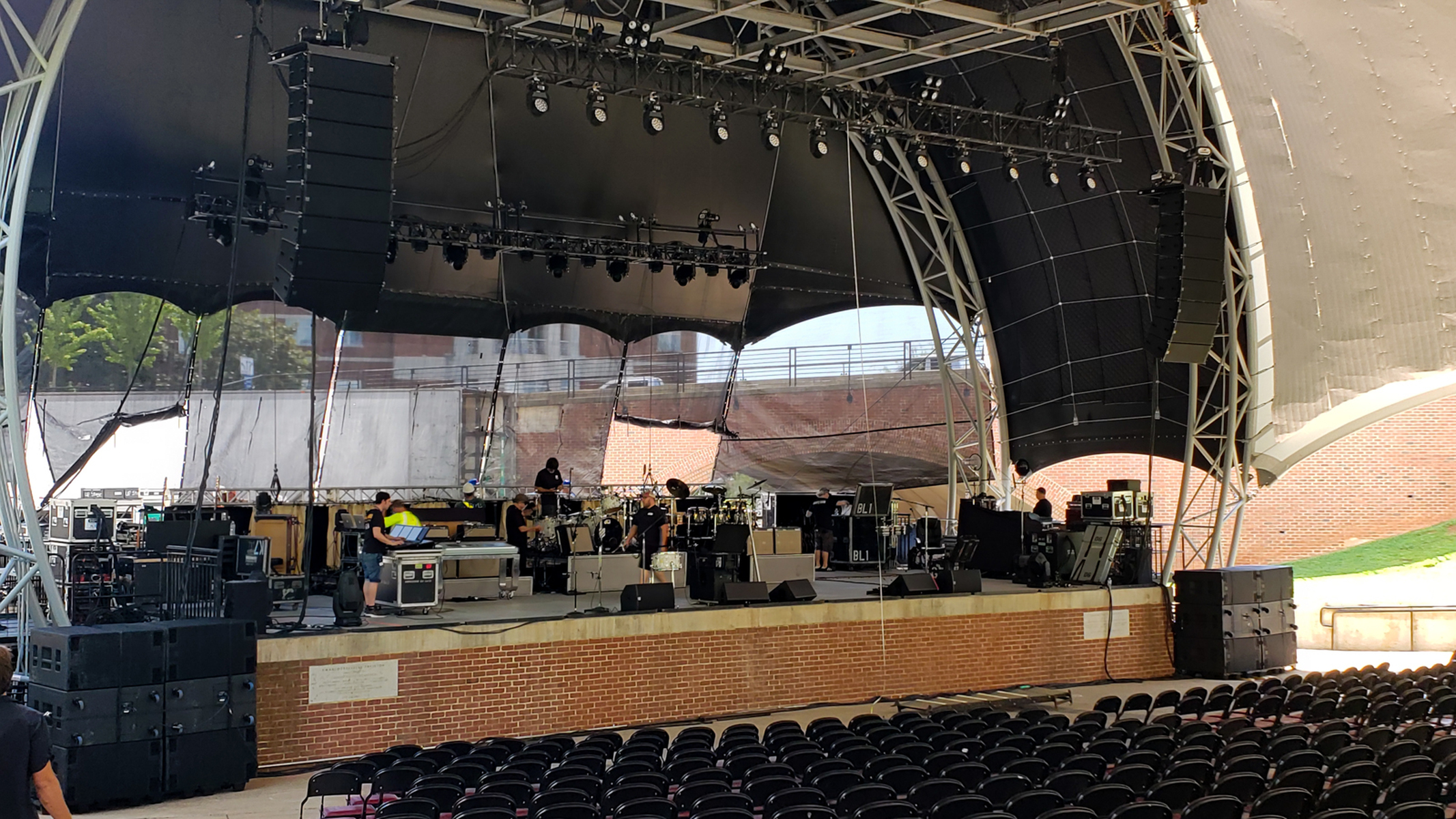 As described by Southard’s Jason Misterka, “Sprint Pavilion is a 3,500-seat amphitheater that’s covered by a tent, with concrete floors that slope down to a bowl and a built-in stage. It also has lawn and picnic seating outside of the entrance and is situated at the east end of the downtown mall in Charlottesville.

“We’ve worked in that venue numerous times before as part of a production team with four different touring PA systems,” Jason continues. “Using the Martin Audio WPL for the show definitely gave us an extra edge. We came in a day early for load-in to test and tune the WPL rig, but we couldn’t make noise until 5pm so a lot of it was theoretical until then and we spent a few hours trying different options that evening.”

Using the Martin Audio WPL for the show definitely gave us an extra edge.

The system setup consisted of eight WPL per side using one-box resolution for maximum effectiveness in the space, along with six SXH218 a side ground-stacked in cardioid formation stage left and stage right. Four CDD-LIVE 15s were deployed as front fills on the stage which Jason acknowledges they really didn’t need. “We could have done it with CDD-LIVE 8s.”

Asked about audio challenges for the show, Jason explains, “there are a couple of factors in the system’s performance that helped determine whether it was a good fit for that space. One is how much bleed there was to the adjacent neighborhoods, another was the audio quality within the tent itself and there’s a small lawn area outside the tent that also has to sound good without bleed down into the mall area.

“As it turned out, the pre-show test was truly eye opening for all of us. Essentially, we measured the venue in advance, and when Joe Lima from Martin Audio came in, we made a few modifications to the file and came up with three versions of the system setup: One version was what we would typically do which is to Hard Avoid® the stage area. Another version was Hard Avoid of the back half of the pavilion tent and a third version which we were less sure about was to Hard Avoid the whole roof.

“And then, listening to prerecorded music and pink noise, we walked around and made mental notes of how each version responded. Ultimately, the setting that Hard Avoided the stage was pretty much preferred by everybody because it gave us the most even coverage and the best response throughout the venue along with dying off evenly outside of the lawn area. Once we directed the sound off the back half of the roof, it really did bring the PA more into focus and it lost more of the reflections and the sound of the room disappeared even more. It was already much better than any other PA I’d heard in the space when we were Hard Avoiding the stage.”

Commenting on WPL’s performance at the Chris Isaak show, Joe Lima adds: “There were a lot of comments about how quiet it was behind the PA from production crew members sitting off the side of the stage who didn’t have to yell at each other. We had six SXH218 per side stacked under the hangs in cardioid because of concerns about a residential neighborhood behind the stage and they were typically limited to 98dB A-weighted at front of house.

“The fact that the mix from Isaak’s FOH engineer became progressively louder during the show with peaks of 102-105dB turned out to be fine in terms of noise bleed to the surrounding neighborhood and the adjoining mall because of WPL’s directivity. The local promoters were very impressed with how loud we could get in the venue without noise problems beyond using Hard Avoid® for non-audience areas. Also, the audio quality for the show was absolutely stellar.”

In conclusion, Jason adds, “The client seemed to be really happy with the concert while the production manager received compliments about how good it sounded that night. Bottom line, it’s the best sounding PA I’ve ever heard in that venue.”