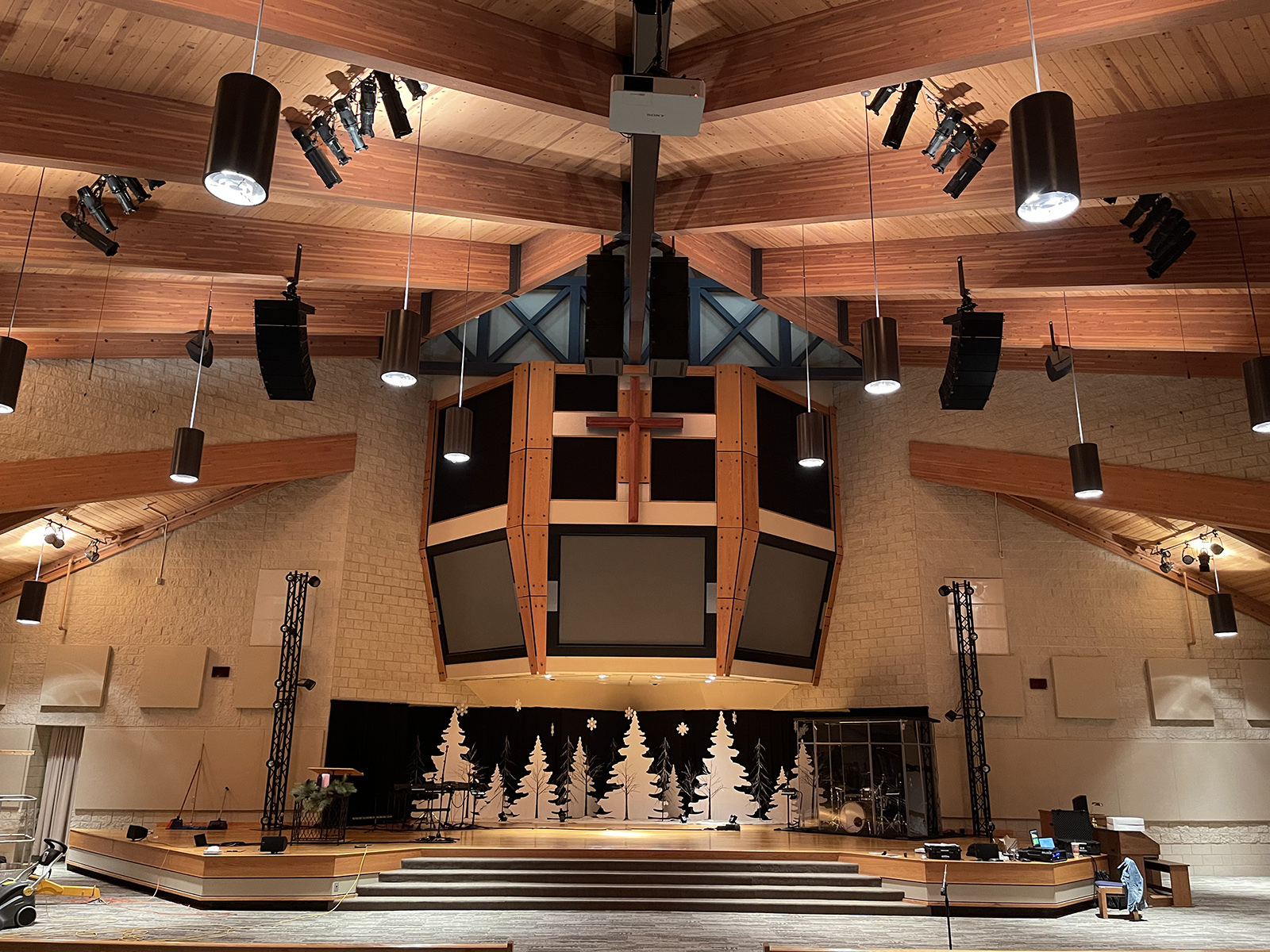 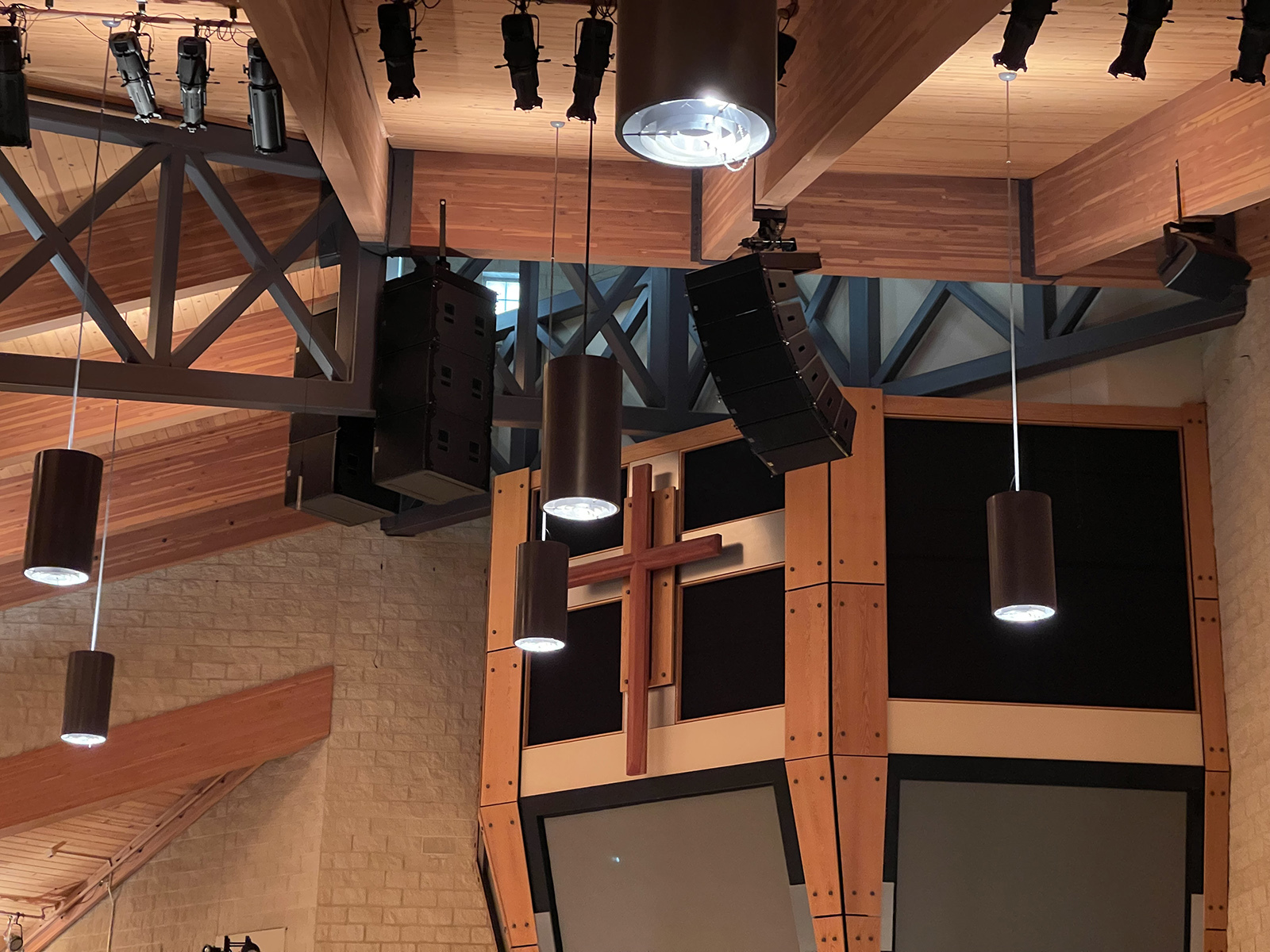 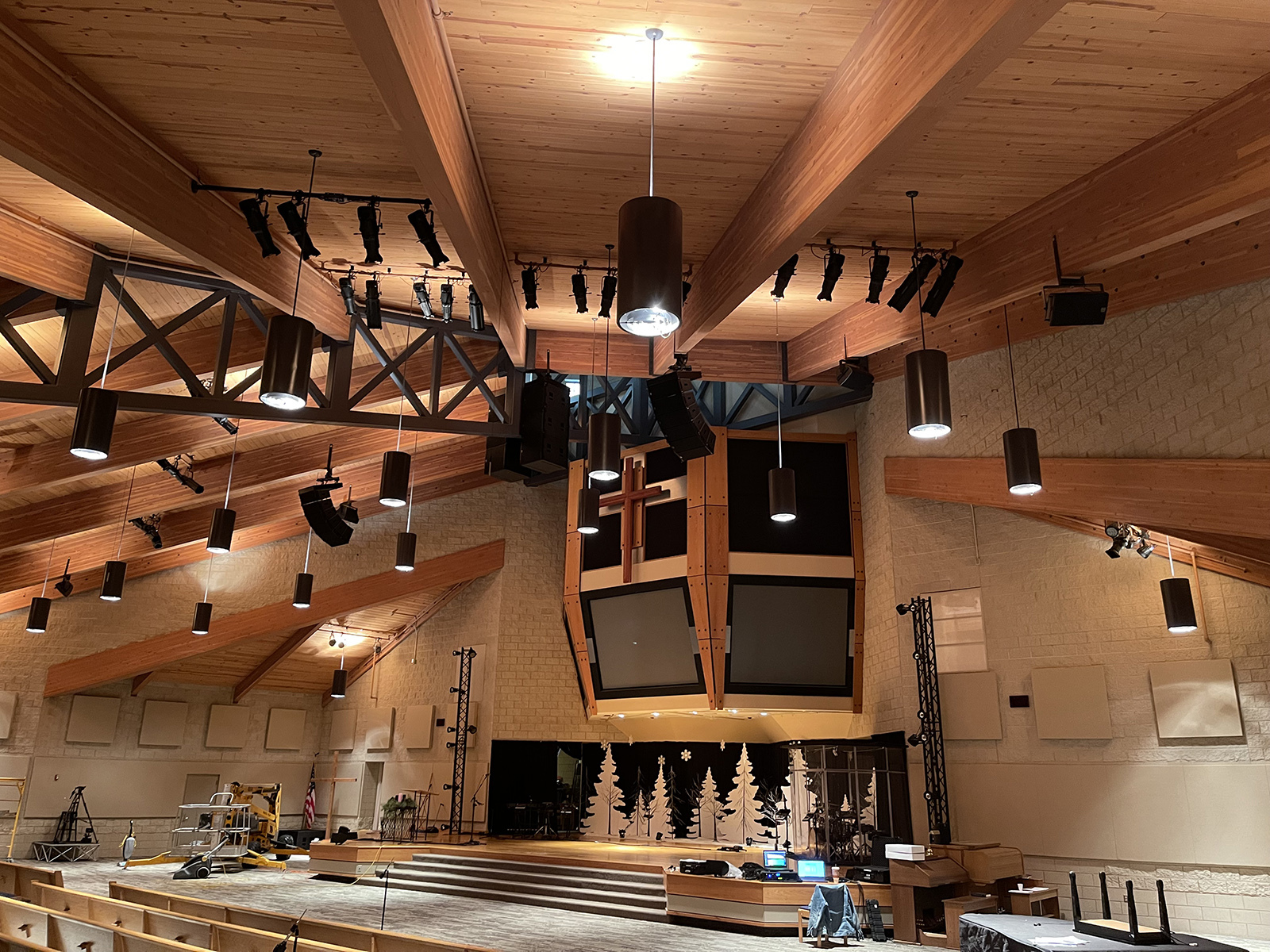 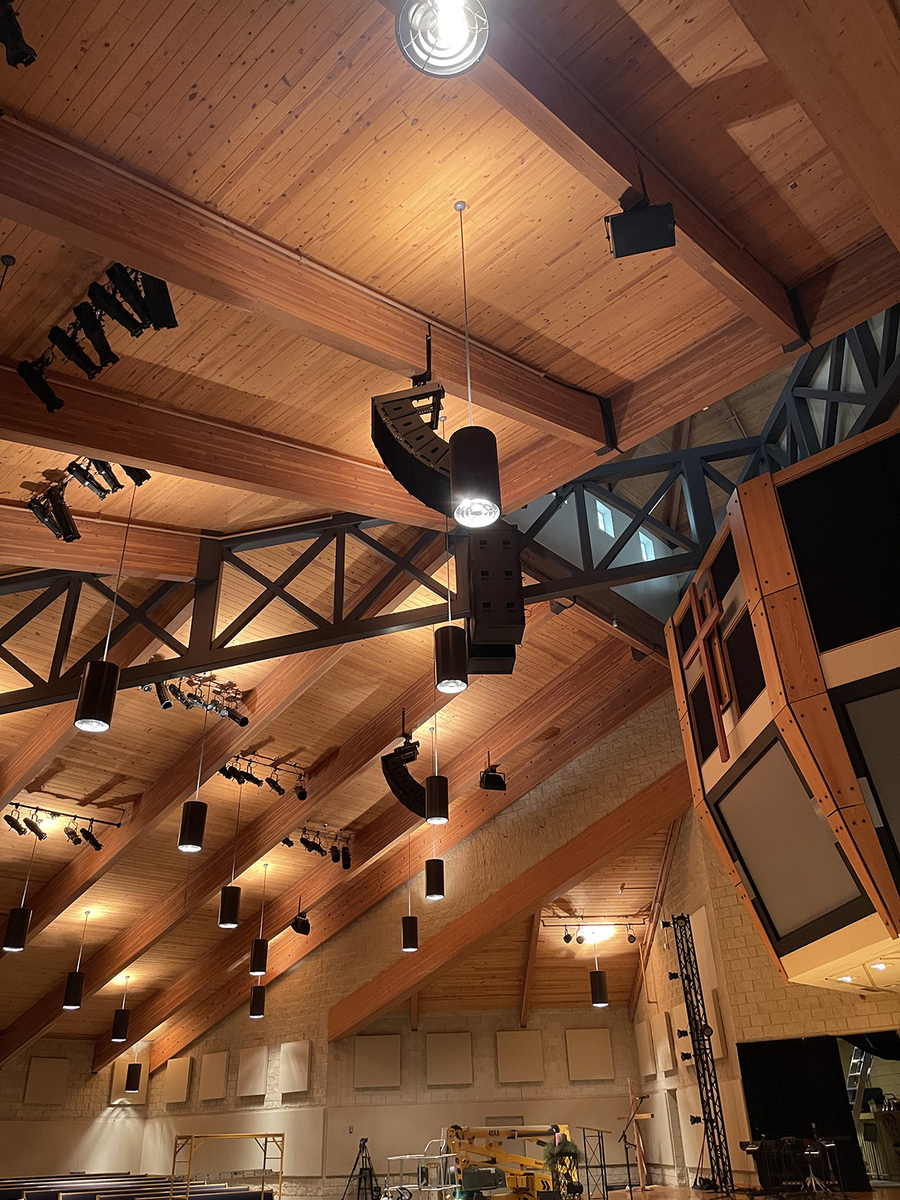 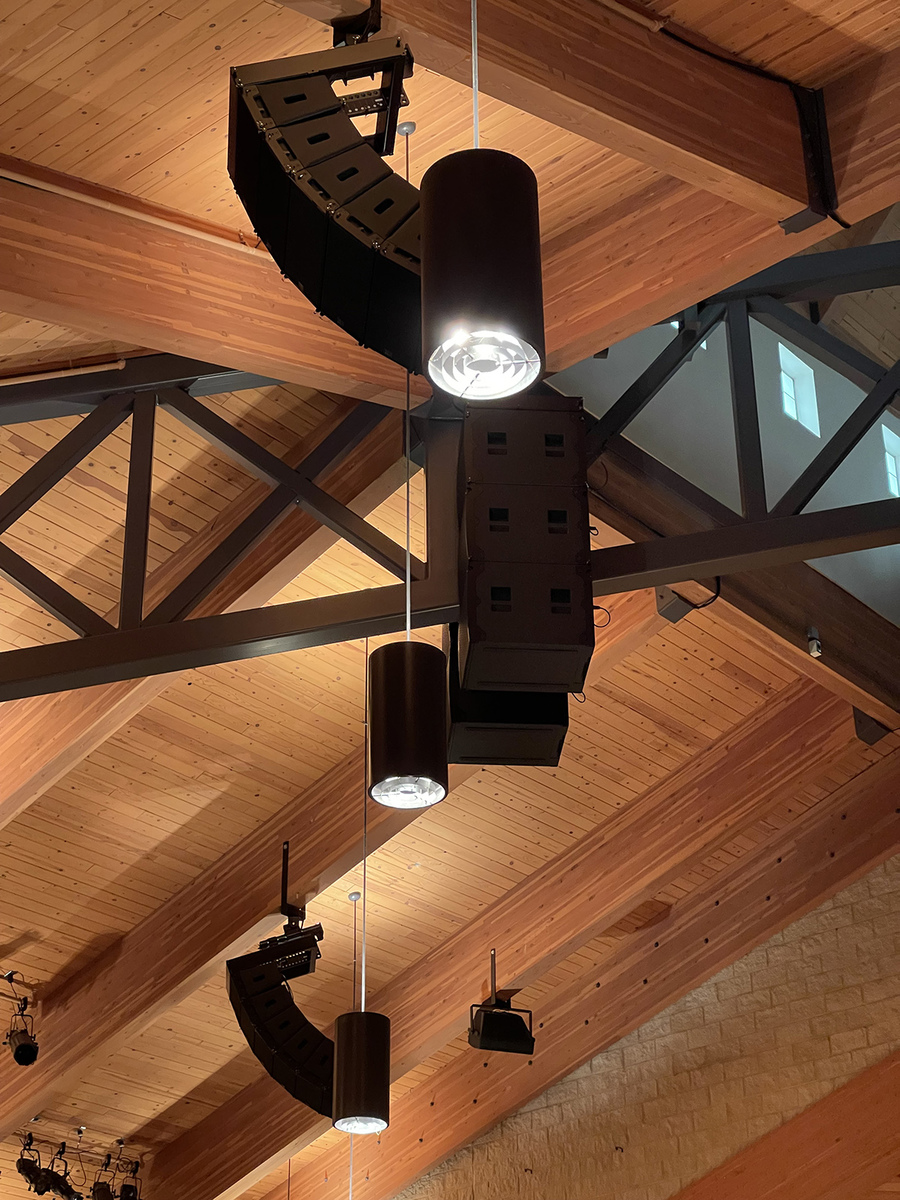 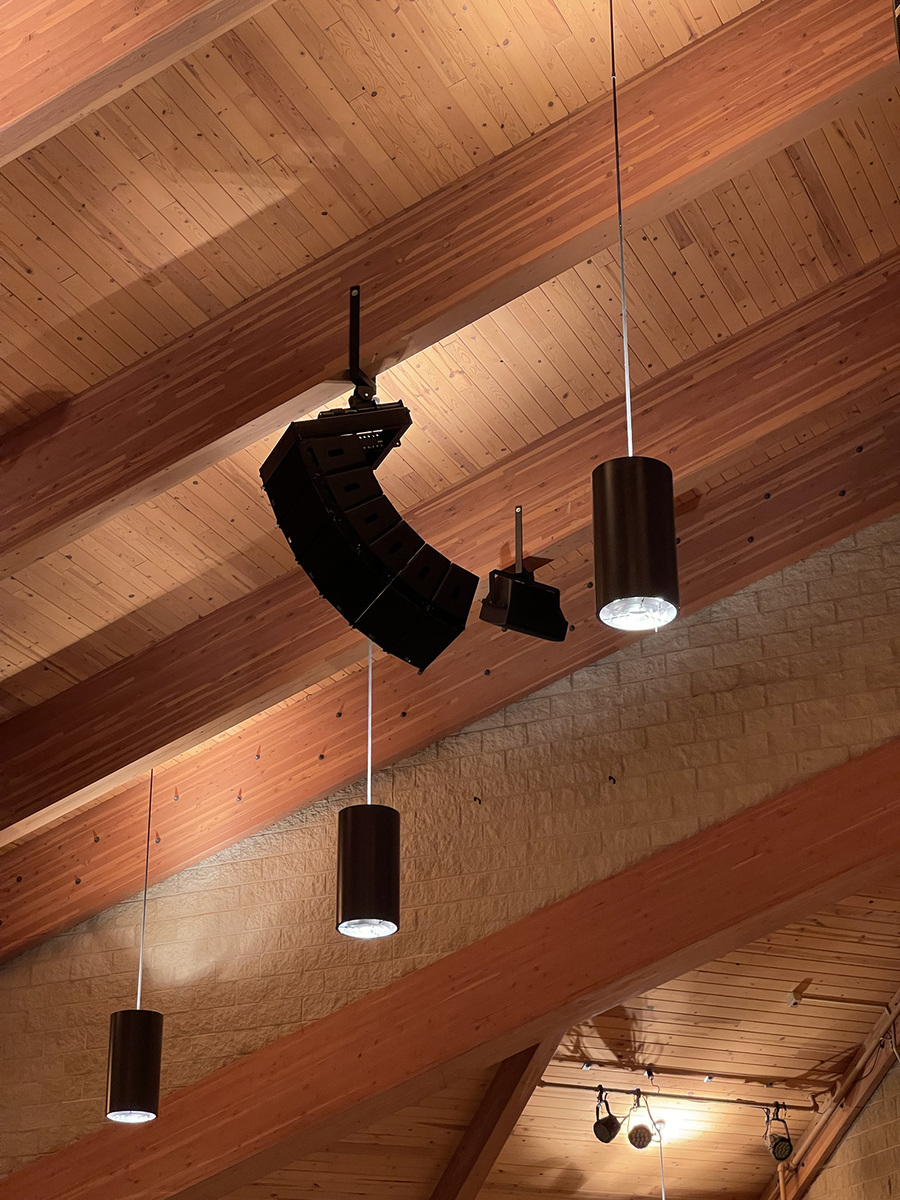 Advanced Audio and Lighting recently completed a technical redesign of the Third Reformed Church in the city of Pella, Iowa, opting for a Martin Audio line array solution.

The integrators were re-engaged, having successfully carried out an earlier sound and lighting installation for the client. Explaining the necessity for the upgrade at the Pella facility, the company’s president (and senior design engineer) Graeme Brown, said, “As so often happens, the existing system was a case of fine products having been installed, but completely misapplied within the environment, so that coverage was extremely inconsistent.”

He noted that the building’s unusual geometric had provided challenges in this regard. “The space is quite unique—a modified fan-shaped building with lots of ceiling angles and a massive custom centre truss that required outfills and delayed loudspeakers to evenly cover all seating.”

The new PA would not only need to address these issues but also have the capability of reinforcing a variety of events and source inputs. “While the Church’s main focus is contemporary music, it does have a choir and mixed quartets on a regular basis for the early service.

“The client was requesting very hi-fidelity, with extended sub-bass, rather than necessarily high SPL.” His solution was to designate a main PA comprising the scalable resolution of the Wavefront Precision WPS compact line array, which features 2 x 8” LF drivers, 4 x 4” midrange drivers and 4 x 1” exit HF compression horns. Wavefront Precision was recently accoladed with the Queen’s Award for Innovation.

To this he added centre flown SXC118 cardioid low frequency enclosures, as well as a further SXH218 subwoofers on the floor for added sub-bass.Additional fills were provided by Martin Audio’s CDD series.

“The Wavefront system and SXC118, in conjunction with the DISPLAY 2 software and iKON DSP amplifiers, driving the system in 1-box resolution, provided optimum efficiency. “It gave us the best control over which areas of the sanctuary needed coverage and which needed avoided. Once properly configured—during the design phase—commissioning becomes greatly simplified; since the system handles the loudspeaker management on its own, the integrator can focus on aligning and tuning the room … and not ‘fixing’ the sound system.”

To achieve this optimisation had required a good deal of clever programming in the Martin Audio software, in particular using the ‘Hard Avoid’ function, stated the installer. “There was initially some acoustic treatment in the space, more absorption was added during this phase.

“With that and the multiple ceiling angles adding diffusion, the space is very well behaved, and the system performs extremely well in those conditions. It has much more gain before feedback, when compared with the previous system.”

The new Martin Audio system also meets all the requirements for weight loading and general aesthetics. “The original system was the typical ‘flying junkyard’, so popular at the time. It consisted entirely of front-loaded, point source powered enclosures, whereas the new system is based on line array technology and cardioid low frequency control.

“Between the Martin Audio factory rigging hardware and the custom Polar Focus beam mounts, this was an extremely clean installation. Everything is high and tight. The clients were thrilled even before it was powered up.”

The result is that the 800-cap congregation in the main sanctuary now receives the exact same signal wherever they are seated, and when the doors open out to engage a further 100-seat overflow, whenever capacity is reached, these worshippers too will be immersed in an identical audio experience.

Advanced Audio’s designer believes the clients are now able to achieve their goals of communication on a much higher level, while no longer battling sound system shortcomings. This is supported by a church spokesman.

“The Martin WPS system that Graeme and his team installed has met and exceeded our expectations, since our room design is not your typical space for modern live sound. The WPS arrays perform very well in our space and have taken our musical mixes to a much higher level while also improving speech intelligibility.

“The steerability and thoughtful design of this PA allowed us to create intentional ‘PA Silent’ areas on the sides of our room. This allows us to better serve our congregation with prayer and communion ministries during our worship services.

“From the tightness of the low end to the clarity and smoothness of the high end, we are extremely pleased with this system design and performance.”