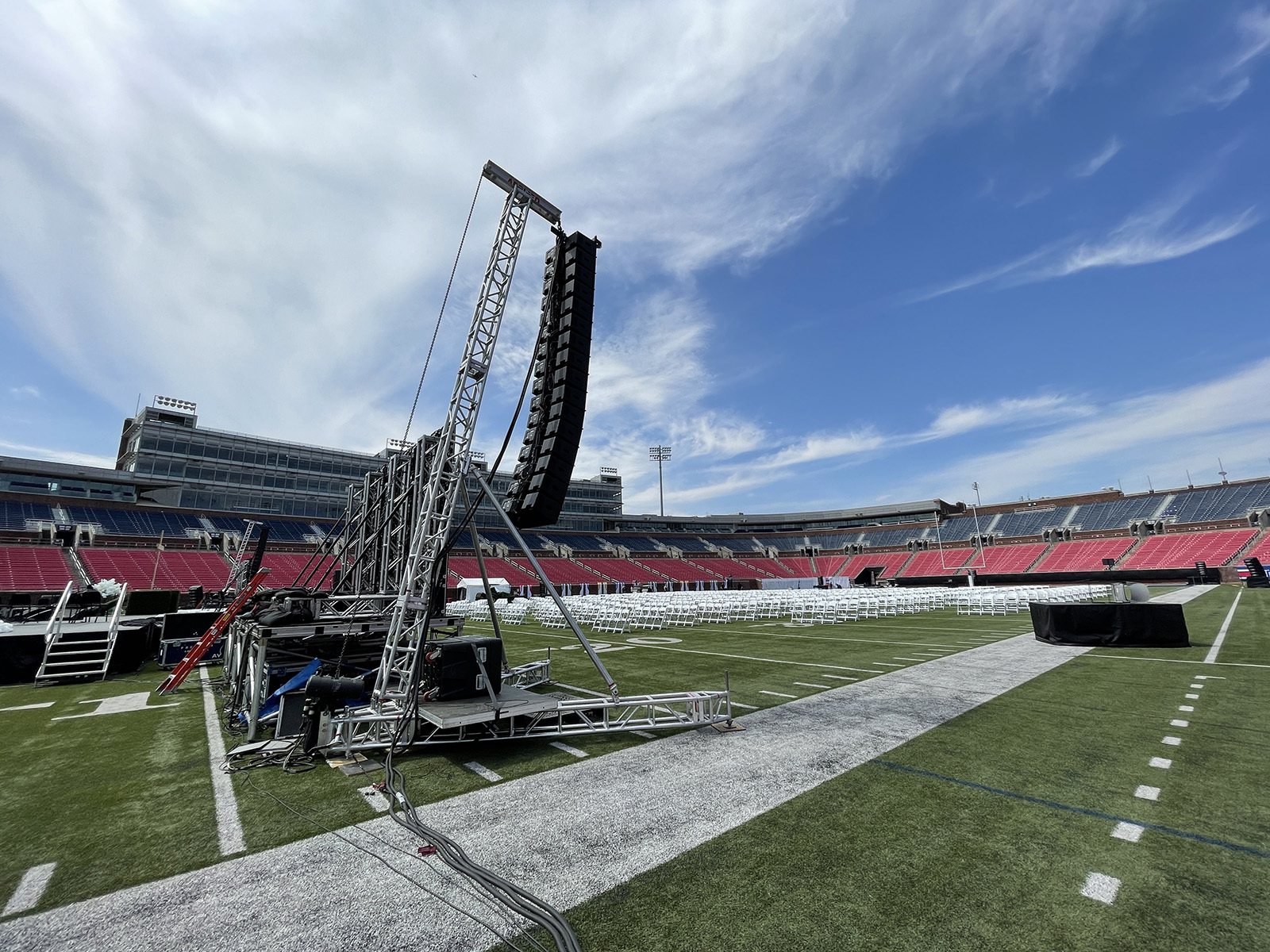 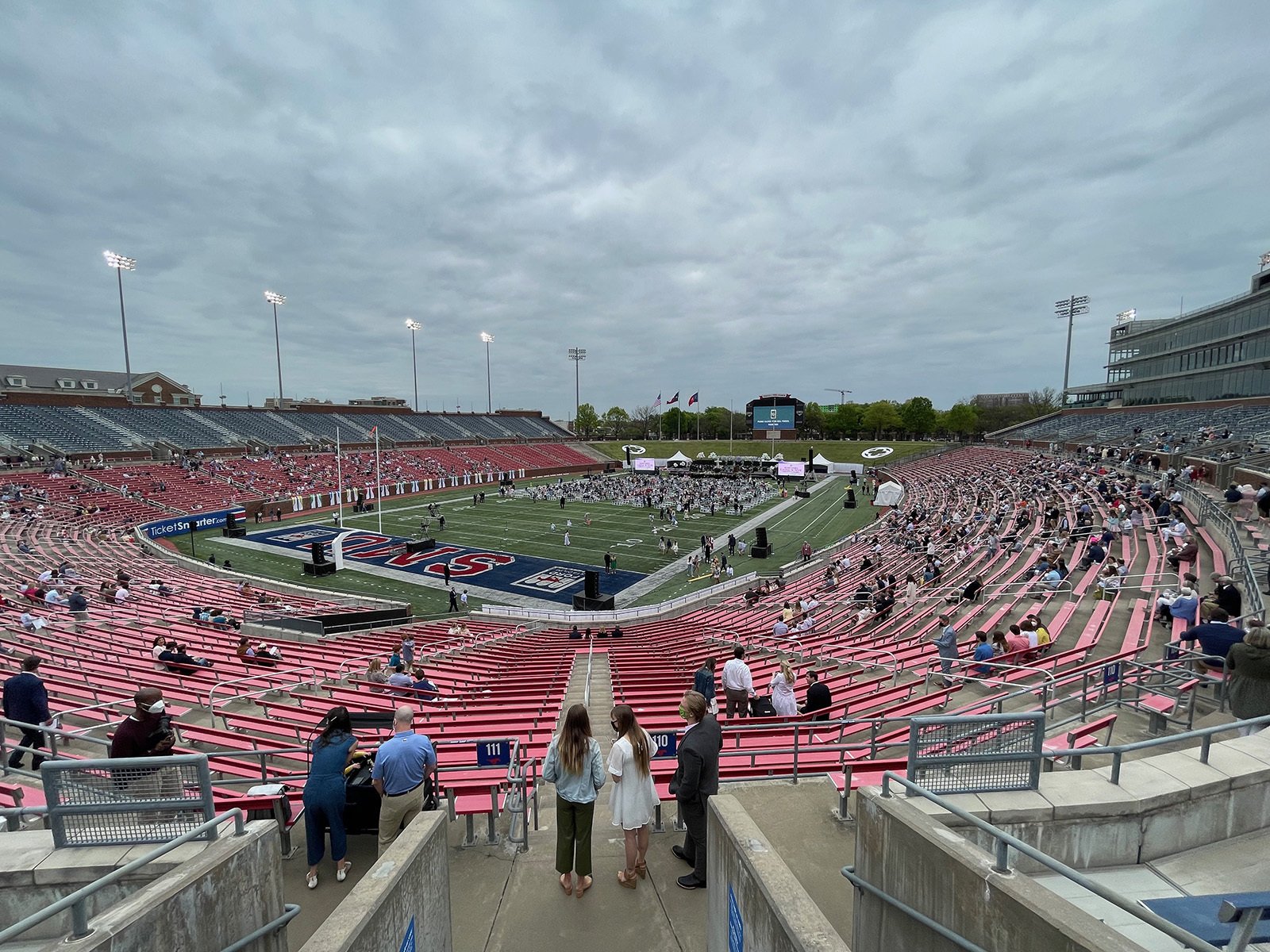 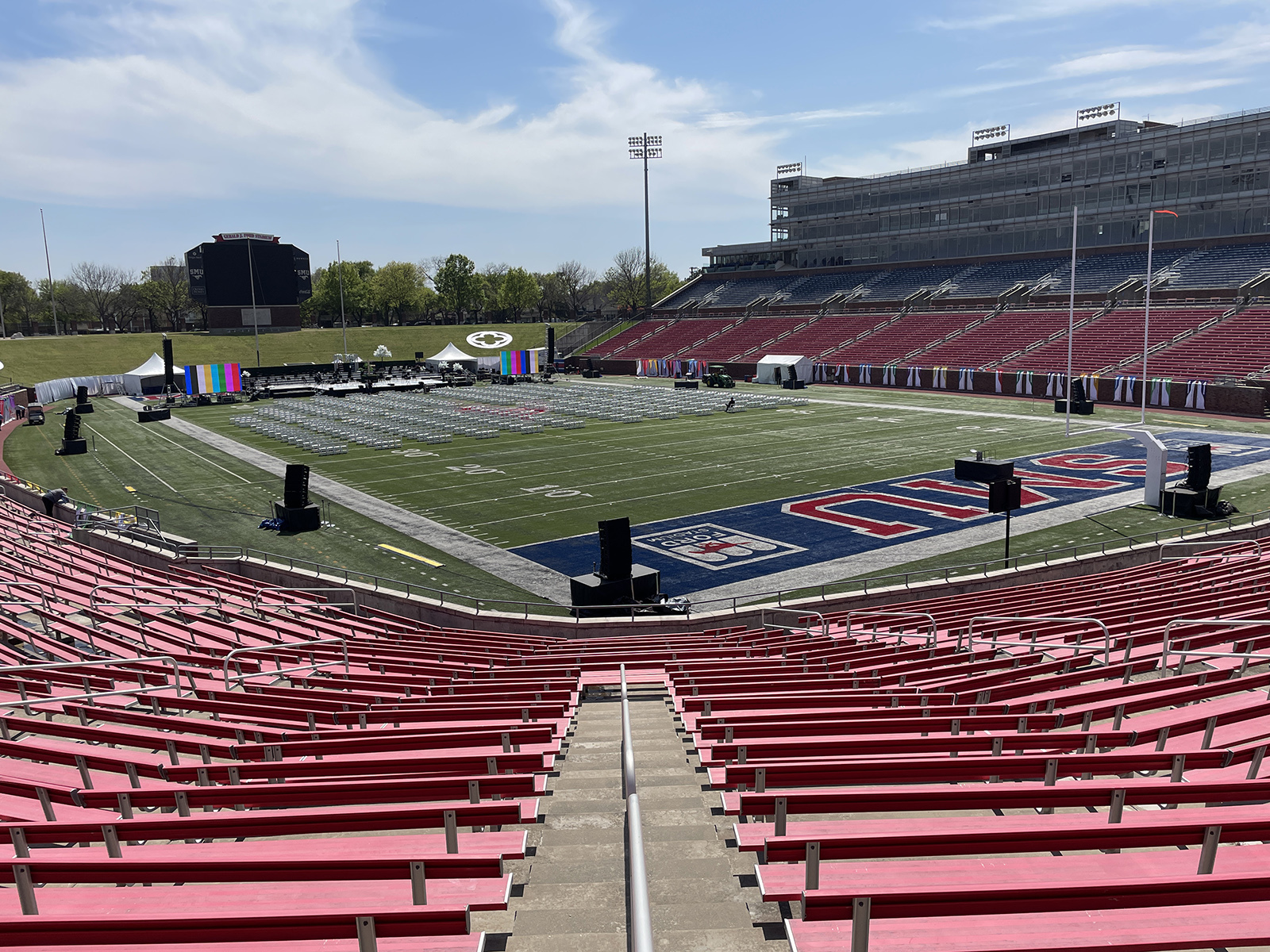 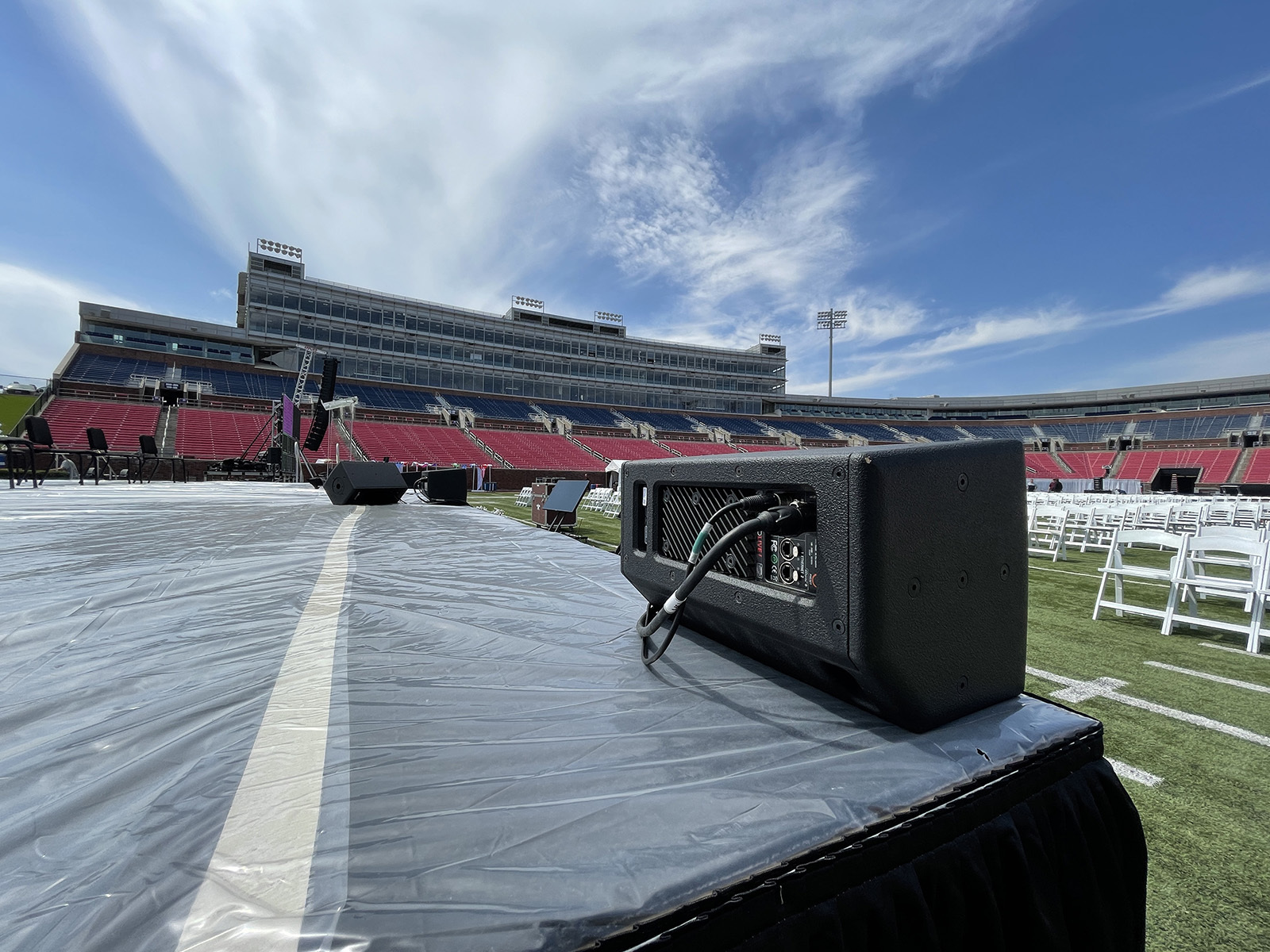 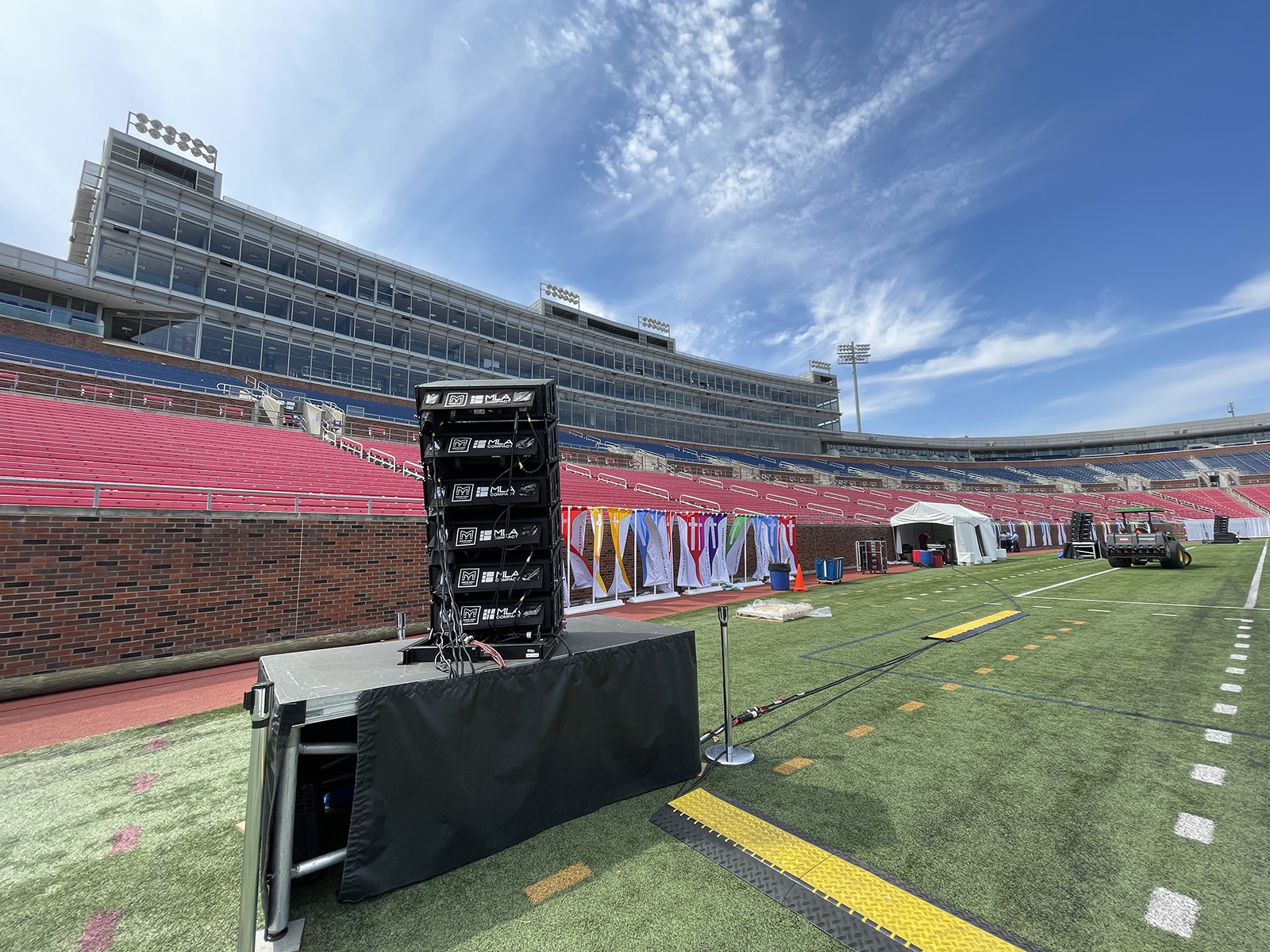 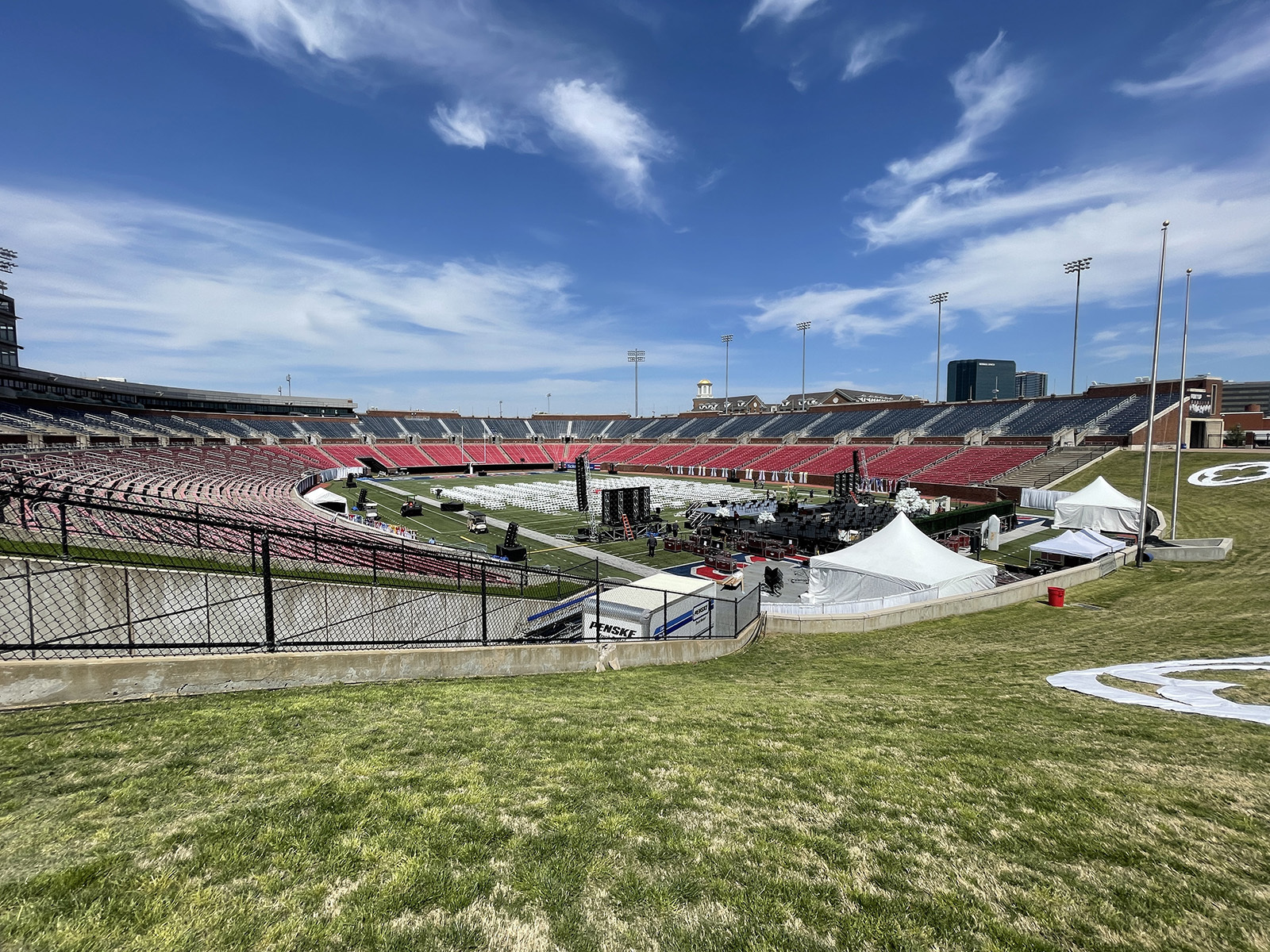 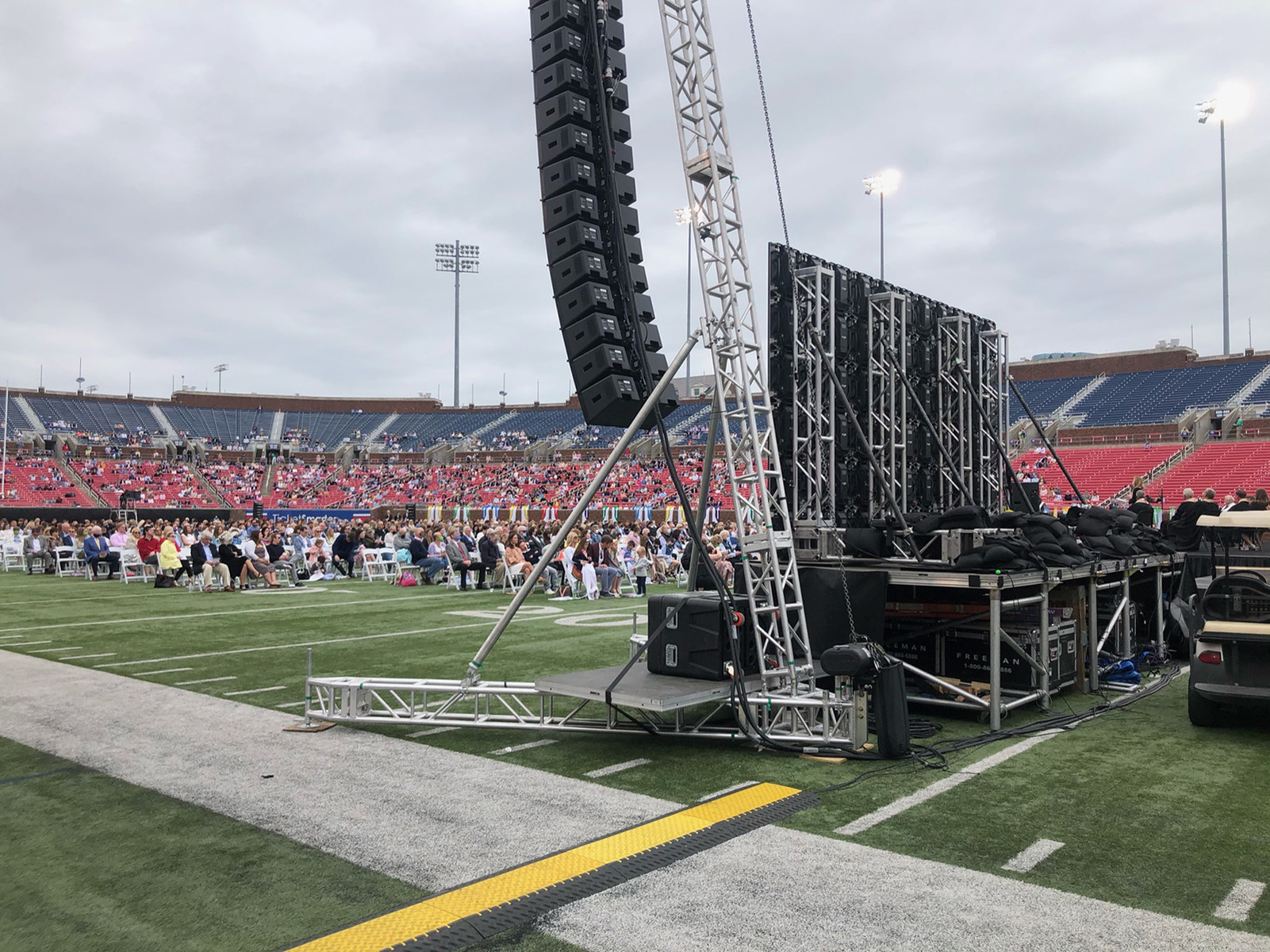 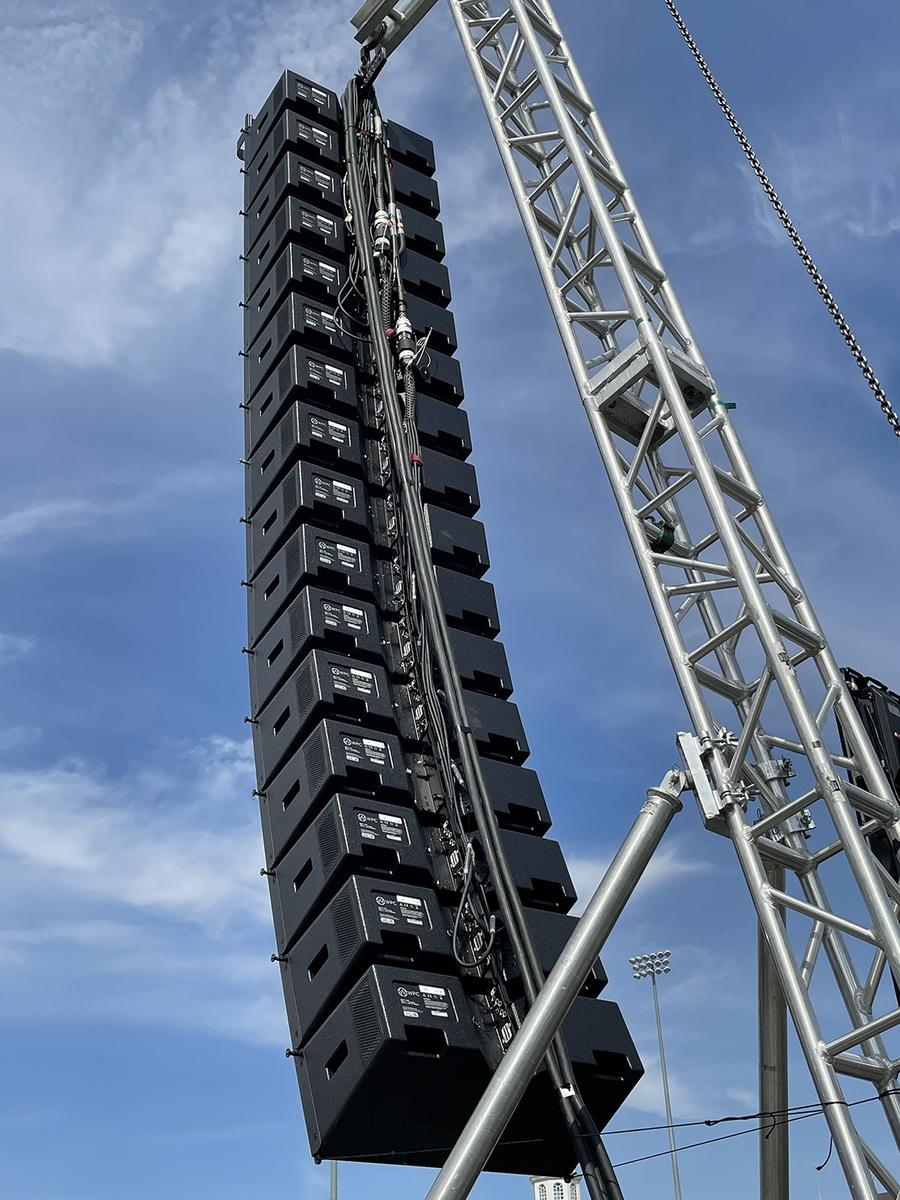 The stadium sits on a university’s campus and while Alford Media has provided audio reinforcement for a number of routine graduation ceremonies at the stadium, the emphasis this time was on providing premium audio—particularly with 600 socially distanced chairs set out for family groups on the field itself—according to Alford’s Audio Services Manager, Ben MacKinney.

Alford Media holds a vast inventory of Martin Audio systems and MacKinney set about combining two of their finest—Wavefront Precision Compact (WPC) for on field coverage, and MLA Compact for the bleachers and stands. This provided the optimum outcome for a congregation numbering around 7,000 people. The Wavefront Precision series was recently recognised with a Queen’s Award for Enterprise in Innovation.

Alford Media originally invested in MLA Compact back in April 2014. “We auditioned every major manufacturer to decide what would put us in a league like no other, including adjustability and changes in coverage distance… and Martin Audio’s technology ticked all these boxes,” said MacKinney. They followed the evolution of this technology through Wavefront Precision (WPC and WPM) and today have over 250 front line elements (as well as CDD-LIVE series).

We cannot overstate the value of the single box resolution, and it performed every bit as well as we had hoped.

On duty Easter weekend were FOH engineer, Eric Faulk, and system engineer, Ryan Sartell. Their task was to overcome the high reflections off the rear of the stadium and the consequent delay. “The software gave us the ability to hang the PA from towers for on-field coverage and stop the sound reverberating before it hit the back bleachers,” reported the tech team. “There was a pre-conceived notion it wouldn’t work because at other events with alternative brands in similar setups the slapback was terrible. We proceeded with the flown system, using Hard Avoid to prevent the sound from reflecting off the bleachers.”

Faulk and Sartell worked in tandem, the former creating a set of different show files, offering optimisations for different scenarios, the latter “tuning, polishing and delaying”. Sartell said, “Walking the stadium confirmed in real life what was in the software.”

Eric Faulk explained the wisdom in taking precautions with the different presets, allowing for changes in humidity. “On site you are never quite sure what you are dealing with. It was the first time we had worked with the PA towers in this venue, and it gave us a bit of wiggle room to be able to change the optimal SPL, which is the most wonderful thing.”

Alford Media fielded two hangs of 16 WPC, run in 1-box resolution from iKON iK42 amps and hung from PA towers. The content of the service included choir, orchestral elements and spoken word. Although requiring only a minimum of low-end extension, 12 MLX subwoofers were deployed in a cardioid setup. Eight CDD-LIVE 8 and two CDD-LIVE 12 were added for outside front fills and six further CDD-LIVE 12 were used for choir fills. “We had many comments from the audience, band and choir on how awesome it sounded,” said Faulk and Sartell.

The MLA Compact rig was setup in nine ground stacks of six elements, distributed around the field, with three stacks on each side-line and three stacks in the end zone.

As for iKONS, Ben MacKinney said, “We cannot overstate the value of the single box resolution, and it performed every bit as well as we had hoped.”

In summary he said, “We entered a challenging environment with the design of the stadium and the staging layout but with the tools Martin Audio has provided us we were able to succeed.HPUMC was very happy with the coverage and quality of the sound for their Easter service.The system performed as we expected, and we have another happy customer as a result.”